Nature curiosity: Why is blue so rare in the animal kingdom? 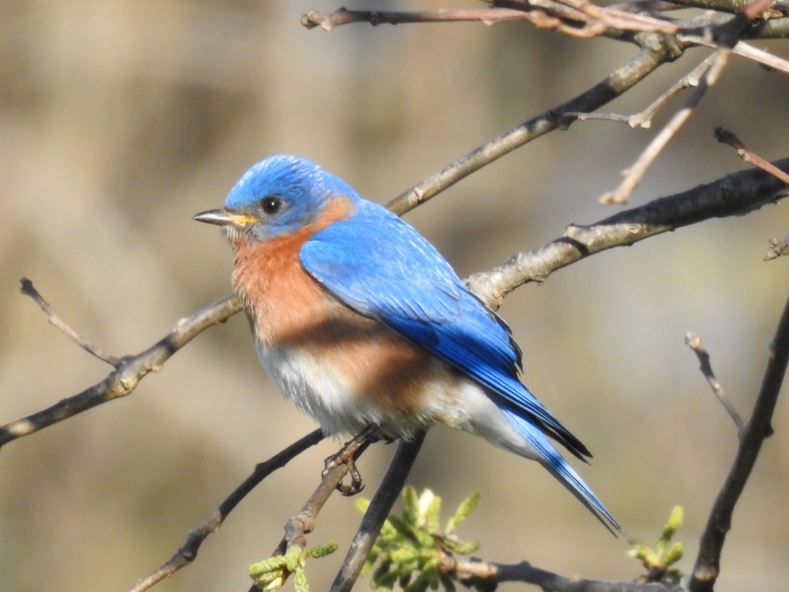 The bounty of color present in nature is one of the things that makes it so special and breathtakingly beautiful, but not all colors in nature are represented equally.

Green is abundant in the plant world, but less common in animals. And many mammals are brown, but we don't see brown flowers. In nature, color is the result of pigments, colored compounds that absorb different wavelength of light, NPR reports. The variation of color we see among animals, from mammals to birds and everything in between, is because of pigments. Just like our eye and skin color are affected by the presence of pigments, so, too, is the color of an animals' fur, feathers, scales, etc.

But not all colors are represented equally in the animal kingdom. Take blue, for example. You can probably think of a few birds that are blue, and maybe you've seen blue butterflies and moths, but in general blue is rare in the animal kingdom. In fact, not one animal on Earth with a backbone makes blue pigment, NPR reports.

The blue hues we see in plants are because of the presence of pigments called anthocyanins, but very few animals have the ability to make blue pigments, TreeHugger reports. When we see blue animals — blue jays, for example — the blue hue is actually the result of a phenomenon called Rayleigh scattering, which is the same phenomenon that makes the sky appear blue.

Blue jays are not actually blue. Instead, they just appear that way to us because of Rayleigh scattering. Blue jays produce a pigment called melanin, which is brown or almost black in color. However, a blue jay's wings contain tiny pockets made of air and keratin, the same protein that makes up our hair and fingernails. When light hits these pockets in the blue jay's feathers, all of the colors of the wavelength except blue are absorbed. The blue wavelength is refracted, which is what allows us to see the feathers as blue in color, according to the Cornell Lab of Ornithology.

That same prism-like effect is what causes other blue birds, such as indigo buntings, eastern bluebirds and peacocks, as well as blue butterflies and moths, to appear blue. Without the prism-like structures in their wings, these creatures would appear a dull brown color instead of a brilliant blue, NPR reports.

Not every shade of blue in the animal kingdom is a trick of the eye though. Some frogs are blue, and lizards too. And maybe you've seen flashes of blue on fish. Close to home, we have the blue-spotted salamander. The blue hues on these creatures are also due to pigments, but not blue pigments. Instead, these animals have green and yellow pigments that give them a blue appearance because of how the different wavelengths of light are absorbed, according to the Center for Northern Woodlands Education.

Some of the blues in the wild are tricky naming conventions. Take blue whales. These giant creatures — the largest animals ever known to live on Earth — look blue underwater, but when they come to the surface it's clear they are gray, according to National Geographic.

There are a very few living things that are true blue, like the Linckia laevigata sea star. These sea stars get their blue color from blue pigments, and they are one of the few creatures on Earth to truly have blue coloring, TreeHugger reports. And a few creatures, lizards mainly, can turn themselves blue. Blue iguanas, for example, turn themselves blue only when they are around other members of their species, and the Sinai agama lizard is normally brown but the males turn blue to attract a mate.