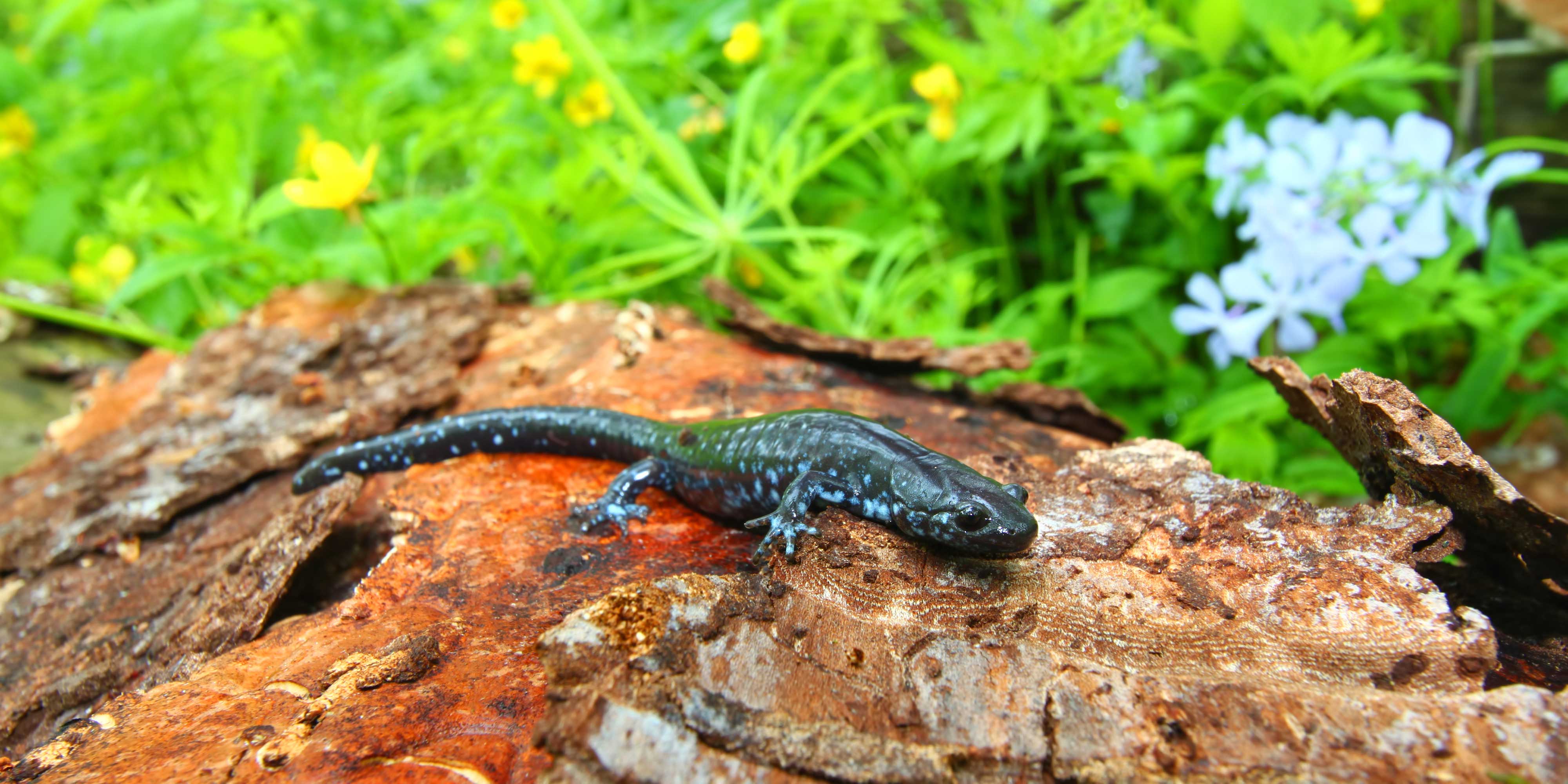 A blue-spotted salamander. (Photo via Shutterstock)

Blue is not a popular color in the animal kingdom. When asked to think of animals that are blue, a few birds might quickly come to mind, like blue jays and great blue herons. The blue-spotted salamander probably wouldn't make many people's list, because most people have probably never seen one.

Blue-spotted salamanders live right here in Will County, but they typically try to stay out of sight. They are one of eight salamanders that live in Illinois, according to the Illinois Department of Natural Resources. Of the eight, only four — the blue-spotted, the eastern tiger, the small-mouthed and the spotted salamander — live in the northeastern part of the state.

Salamanders look like lizards, but they aren't related. Salamanders are amphibians, while lizards are reptiles. Salamanders, including blue-spotted salamanders, produce toxins as a defense mechanism. They have glands near their tails that can secrete a toxin when they are threatened, reports NatureWorks.

We often associate animals with the noises they make, but that's not true of salamanders. These animals can't hear, and they also don't make any sounds of their own, according to the San Diego Zoo. They are usually able to sense other animals nearby through vibrations in the ground.

The word salamander comes from an Arab term for "lives in fire," according to the University of Michigan's Animal Diversity Web. In ancient folklore, people believed salamanders could live in fire. This belief came about because they were often seen coming out of logs that had been lit on fire. It wasn't until later that people realized the salamanders were in the logs because they provided the moist habitat they require.

Blue-spotted salamanders are mostly black or blackish-blue in color, with bluish-white spots on their sides, tails and legs and sometimes their backs and bellies, according to Animal Diversity Web. They typically grow to be between 3 inches and 5 inches long, and their tails account for about 40 percent of their body length.

Blue-spotted salamanders are found in only a small part of the United States, mainly in and around the Great Lakes, according to Animal Diversity Web. In Illinois, they live in only the northeastern portion of the state, which includes Will County, IDNR reports.

These salamanders typically live in wooded areas, usually near small ponds or water sources or in areas with moist soil, Animal Diversity Web reports. Many salamanders spend much of their time underground, but blue-spotted salamanders are often above ground, but out of sight under fallen logs, leaves or other plant debris.

Some salamanders give birth to live babies, but blue-spotted salamanders lay eggs in water, which is why they live near a water source. They mainly breed in April, and the eggs take about a month to hatch. The larvae live in the water for a few months, transitioning to their adult form. Once they reach their adult form, they move onto land, usually by late summer.

These salamanders are carnivores, and their primary food source is insects, spiders and small invertebrates, Animal Diversity Web reports. In addition to a wide variety of insects, common foods include snails, slugs, worms, centipedes and aquatic insects such as water fleas and insect larvae.

Blue-spotted salamanders do one thing most all humans can appreciate: they eat mosquitoes and mosquito larvae, according to Animal Diversity Web. And as amphibians, their mere presence in an area is an indicator the habitat is clean. That's because amphibians breathe through their skin and are very sensitive to toxins and other contaminants. If you see salamanders, frogs and other amphibians in an area, that's a good sign. It means the water is clean, providing a healthy habitat, according to the Clemson University Cooperative Extension.