Ring-necked pheasants not native to U.S. but have thrived as a game bird 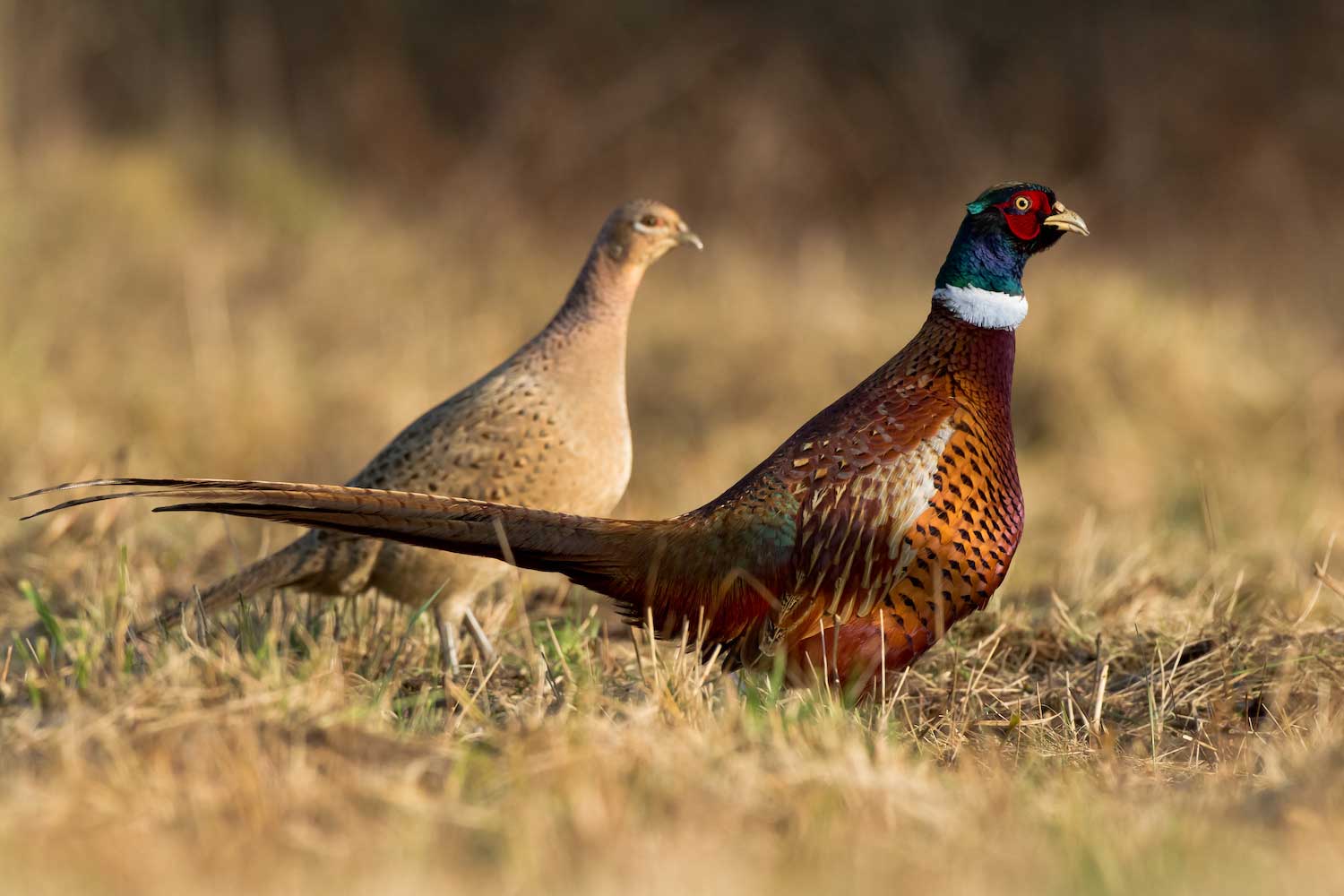 If you think ring-necked pheasants look a bit unusual for North American birds, you'd be spot on, because these birds are actually native to Asia.

Today, ring-necked pheasants live far beyond Asia, having been introduced in North America and elsewhere as a game bird, according to the National Audubon Society. These non-native birds were first introduced in the United States in the 1880s and remain a popular game bird today.

It's easy to see how these birds got their name when you see a male ring-necked pheasant. Like many other birds, males, called cocks, sport much more colorful and flashy plumage than females, called hens. Their heads are green and purple, and they have a red face and a bold white ring around their necks for which they are named, according to the Cornell Lab of Ornithology. Their bodies are coppery and brown with black and white spots, and they have a very long tail. Females are brown or cinnamon brown in color with some black markings, usually on their wings and backs. They also have a long tail, but not nearly as long as the males'.

Ring-necked pheasants can live in deserts, forests and grasslands, but in Illinois they mostly live in open areas such as fields, farms and marshes, according to the Illinois Department of Natural Resources. They are common year-round residents of the northern two-thirds of the state but are only rarely seen in southern Illinois.

Despite the males' colorful appearance, it can be hard to catch a glimpse of these birds because of their preferred habitat. They are partial to areas with dense vegetation that is between 9 inches and 18 inches tall, which allows them to remain mostly unseen even in places with high populations, according to Cornell Lab. In the winter, they may be more visible as vegetation dies back. Otherwise, a good place to look for them is in weedy areas with shorter vegetation or in agricultural fields. And don't be surprised by one if it darts out from the tall vegetation along a roadside.

These pheasants eat mainly seeds and insects, but their diet changes throughout the year. In the winter and fall they eat a lot of seeds, particularly grain found in fields, along with nuts, fruits, vegetation and some insects, Cornell Lab reports. In the spring and summer, when insects are more readily available, they eat insects such as ants, beetles, caterpillars, crickets and grasshoppers, along with worms and snails. They also eat more green vegetation in the warmer parts of the year.

Ring-necked pheasants don't typically visit feeders, but you might be able to attract them with feeders on the ground or platform feeders stocked with cracked corn or sunflower seeds, according to Project FeederWatch.

The time of year when pheasants are most visible is during and just before mating season, when the males select and defend a territory and then perform courtship displays to attract mates. These mating displays can include wing flapping, calling, strutting, running and spreading their tails and wings, according to Cornell Lab.

Like many other ground-dwelling birds, ring-necked pheasants nest on the ground. Female pheasants choose a nesting site in tall vegetation. They will either look for a natural depression or create their own by scooping out soil to make a nest 1 inch to 3 inches deep. There females lay between seven and 15 eggs that will hatch in 23 to 28 days. The young pheasants can leave the nest immediately after hatching but will follow their mother around for a period as they feed themselves.

Although pheasants are ground dwellers, they are capable of flight. They don't fly long distances however, usually traveling no more than 600 feet by air, according to Cornell Lab. Their flying ability is thanks to their powerful breast muscles, which most birds in the pheasant and grouse family have, including wild turkeys, greater and lesser prairie-chickens and gray partridges.

Pheasants and grouses often put these powerful muscles into use when danger closes in. They can flush vertically at speeds of up to 40 mph to quickly escape a predator or other threat, Cornell Lab reports. Despite their getaway skills, pheasants are preyed on by a variety of animals, including badgers, coyotes, foxes, raccoons and skunk as well as hawks and owls.

Ring-necked pheasants benefit the ecosystem by helping control insect populations and serving as a food source for other animals, but they can negatively impact ground-nesting birds such as gray partridges and greater prairie-chickens because male pheasants can be aggressive, Cornell Lab reports. Females also sometimes lay their eggs in these other birds' nests, causing their own clutches to fail.