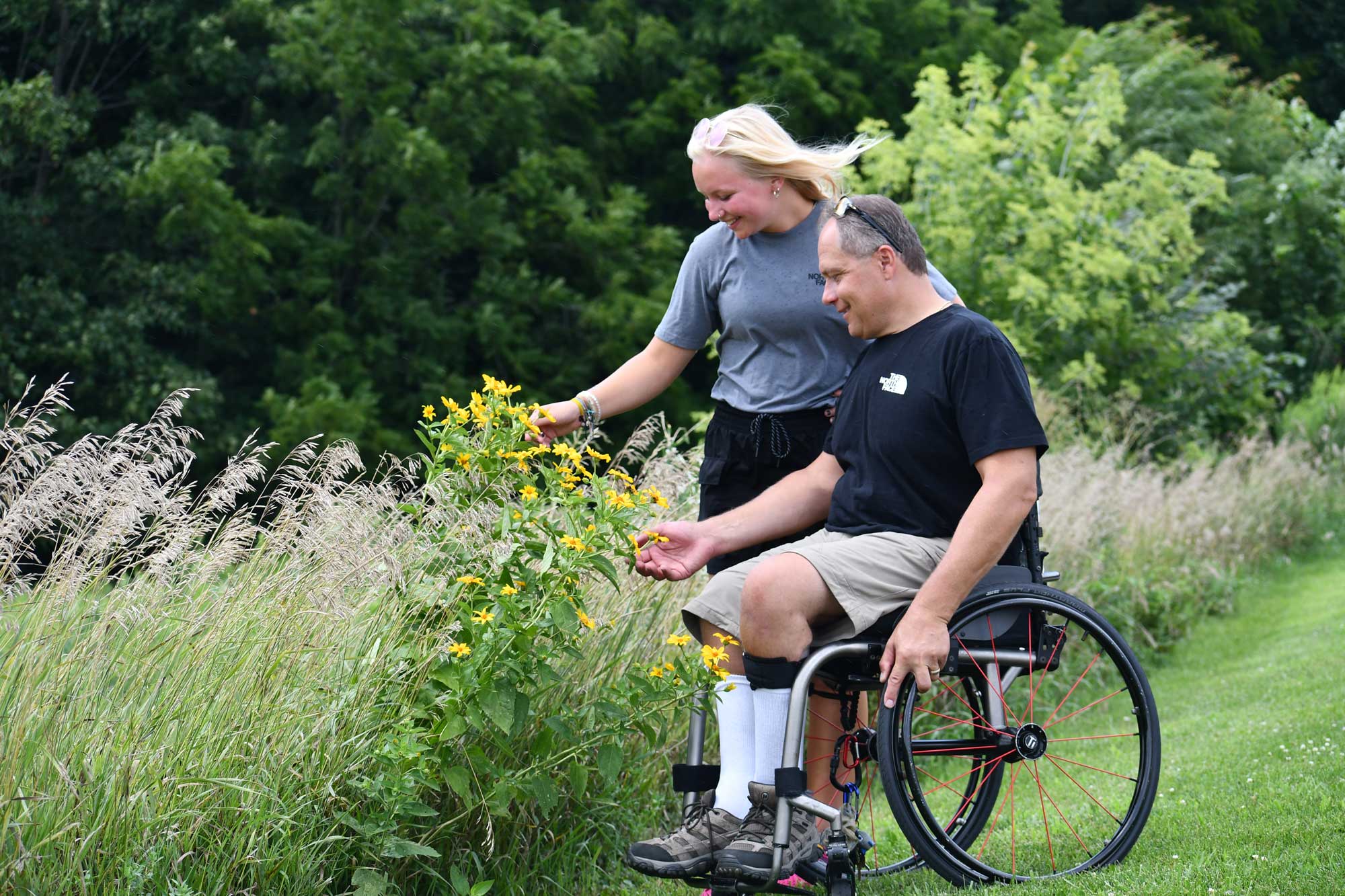 Bill Bogdan and his daughter Hannah. (Photo by Anthony Schalk)

The Forest Preserve District launched a campaign this year called "The Preserves Are for You." As part of the campaign, we are featuring the stories of people of varied cultures and abilities who spend time in the preserves. You will learn how they came to love nature and how the preserves enhance their lives. Here is the story of Mokena residents Bill Bogdan and his daughter Hannah.

Bill Bogdan grew up in South Holland and moved to Mokena in 2009 to build a home that was wheelchair accessible for him and would accommodate his growing family. He works full time as a disability liaison for the Secretary of State’s office and has participated in many adaptive sports, including mountain biking, indoor rock climbing, kayaking, hand cycling, scuba diving and sled hockey.

Hannah Bogdan, 19, grew up in Mokena where she was on the Lincoln-Way Central High School cross-country and track teams. After graduating in 2021, she attended one year of college at the University of Illinois at Chicago. But this year she is transferring to Prince William Sound College in Alaska to study adaptive outdoor recreation. She said her dad inspired her to seek a career in this field. “My dad has participated in adaptive sports my whole life and being around that has created such a sense of joy that I never want that feeling to end,” she explained.

Born in 1969, Bill said his mother thought there was something wrong with him when he couldn’t sit up on his own. Doctors told her Bill was just developing slowly, but she persisted, and Bill was diagnosed with neuroblastoma of the spine when he was eight months old.

He underwent surgery, 18 months of chemotherapy and four weeks of radiation, which saved his life but left him an incomplete paraplegic, which means he is paralyzed from his knee down on his left leg and from his hip down on his right leg.

As a result, Bill was not able to play any organized sports while in grade school or high school. The closest he came was being named a team mascot for a friend’s Little League team.

“They gave me a South Holland Little League hat, and that was the only way I got one,” he recalled.

But what he couldn’t get at school, he received at home from his parents.

Bill’s parents let him play backyard football with friends, where he was always the designated quarterback. And the family would take weekly trips to the Sand Ridge Nature Center in South Holland and frequent fishing trips to a nearby lake in Thornton.

“I’ve been disabled all my life,” Bill said. “But I had a great family, and my parents were always into never letting my disability stand in the way for me. They didn’t want me to be excluded or to use it as an excuse.”

Bill has passed along his love of outdoor activities to his family. Hannah said growing up, she remembers always participating in Forest Preserve District of Will County programs. And in high school, her cross-country team used the Hickory Creek Bikeway for training.

“In the summertime, we’d meet there every day at 7 a.m. and we’d run,” she said. “It was nicer than running around the school or in the neighborhood.”

Moving to Mokena not only provided Bill with the accessible house he needed, but it also provided access to 1,541-acre Hickory Creek Preserve, which is only 10 minutes away and can be reached by bike.

“Being so close to Hickory Creek, we love to come out and take walks and bike rides,” Bill said of his family which, in addition to Hannah, includes his wife, Laura, and children Jack, 13, and Madelyn, 11. “We love the change of seasons and love to participate in different programs that are offered there.”

The family branched out to other Forest Preserve locations as well, including kayaking at Monee Reservoir and Whalon Lake and hiking at Hadley Valley and Messenger Woods Nature Preserve.

“For me, the preserves have always been about family, fun and nature,” Bill said. “I love the peacefulness of it, I love the tranquility. Sometimes we come out walking and we see deer, frogs, snakes and birds. There is so much beauty out here.

“I find it therapeutic,” he added. “We’re always in the hustle and bustle of the city and sometimes you can get lost in the woods and forget where you are.”

Bill uses a hand cycle to travel paved trails, an adaptive mountain bike on natural surface trails and a special wheelchair that can roll through sand or snow, which he took on a recent trip to Hawaii.

“At the end of the month, I’m headed to Colorado and I’m going to mountain bike for a week,” he said. “They will take us up on the ski slopes and have our bikes on top of the mountain and we will ride right down the mountain on them.”

Hannah loves being in nature so much, she decided not to pursue a career in advocacy and law after her first year of college.

‘I realized that I would hate sitting at a desk all day long when I could be outside exploring the outdoors,” she said. “There is so much cool stuff in nature. You can see flowers or a butterfly. I like looking at the small things. It’s exciting being outdoors.”

Bill said while he loves to visit state and national parks, the local preserves offer something that everyone can enjoy.

“You're close to home and you can make a day trip out of it,” he said. “So, you’re not driving three, four, five hours or longer. These are right in your backyard.”

Bill encourages those who have disabilities to enjoy nature and to use the accessible facilities that have been provided.

“You need to get out there and enjoy life,” he said. “In this day and age, there is nothing that you can’t do.”

And Bill encourages outdoor agencies to partner with non-profit agencies to increase accessibility, “for people of all ages and every ability to participate in nature,” he said. “That’s the ultimate goal that I would love to see.”

Hannah, who worked as a camp counselor this summer, hopes to use her love of nature and children and all that she has learned from watching her dad’s adaptive sports outings in her career.

“My dad always has such a positive attitude," she said. "He never lets his disability stop him from anything and he’s always out there on trails or bike rides or the beach, and he’s always climbing and trying new things. My whole life, he’s always made sure that I know that anything is possible and there isn't anything that I can’t do.” 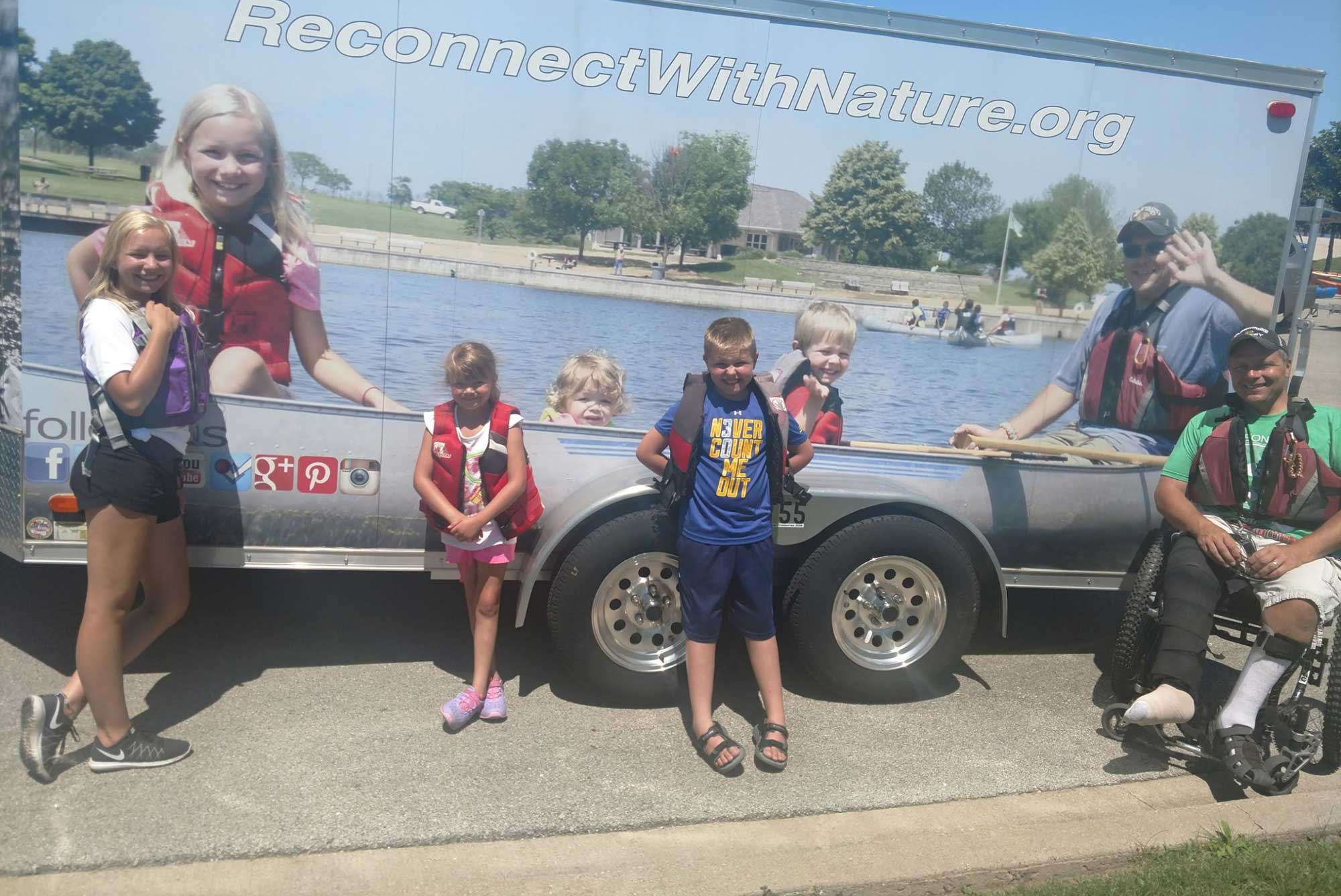 If the Bogdan family looks familiar, you might have seen them on the side of one of the Forest Preserve District’s kayak trailers. The original photo of Bill, Hannah, Jack and Madelyn sitting in a kayak was taken in 2015 at Monee Reservoir and it was used in a photo wrap around the trailer. When the family encountered the trailer adorned with their photo in 2018 at Whalon Lake, another photo was taken of Bill and the kids in front of the trailer

“These pictures demonstrate how much fun the forest preserves offer for families!” Bill said.

If you are interested in attending a Forest Preserve District of Will County program and need an auxiliary aid or service, you can mention this while registering for a program or submit a request online no later than 48 hours before the program.