Something fishy is going on at Four Rivers 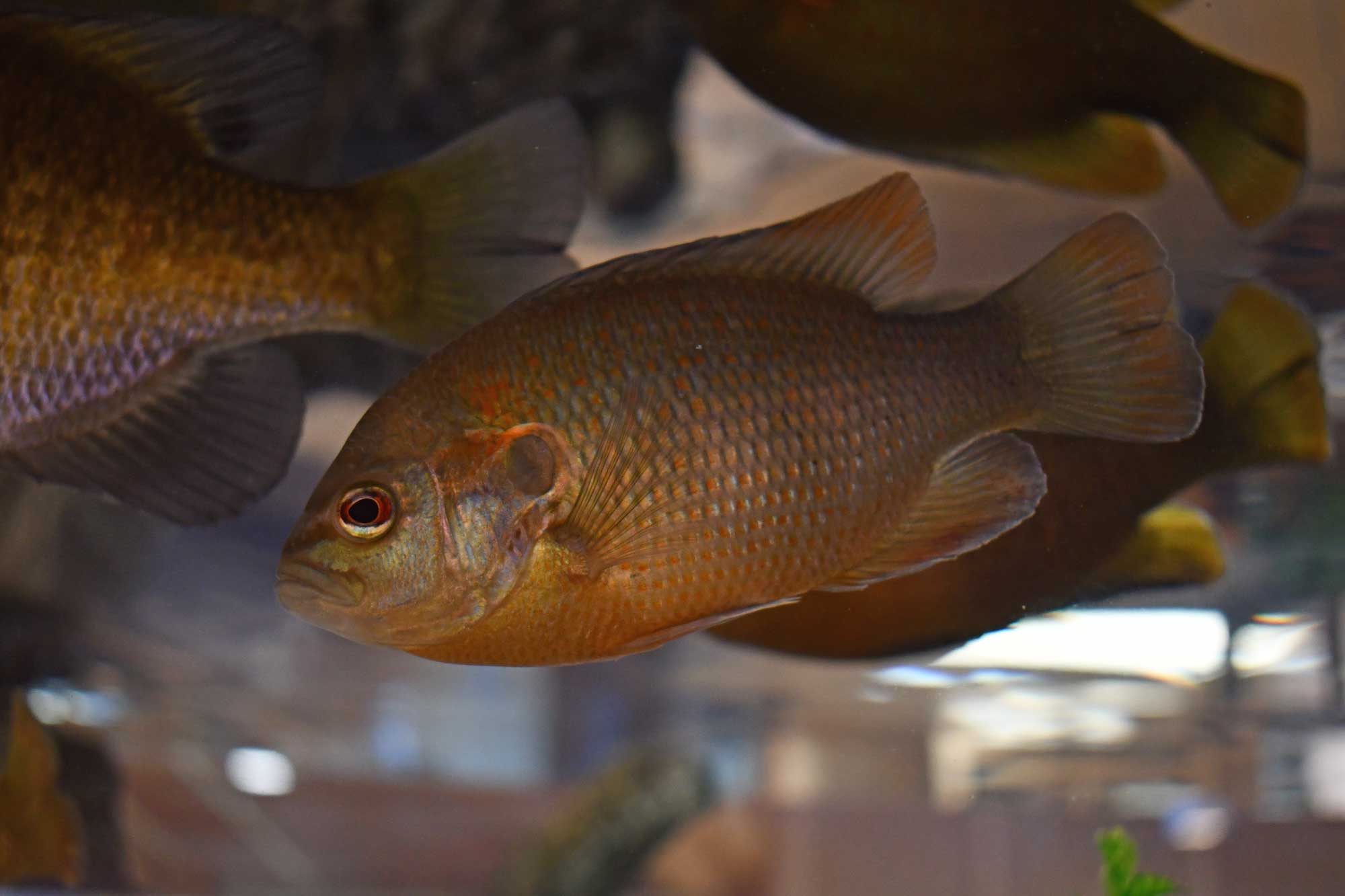 Red-spotted sunfish are in the new aquarium at Four Rivers in Channahon. (Photo by Chad Merda)

The smallest fish in a new 2,000-gallon aquarium at Four Rivers Environmental Education Center has a big story to tell.

As part of the redspotted sunfish recovery program, the Illinois Department of Natural Resources has asked public aquariums to include the fish and to educate the public about its plight.

“Most people have never even heard of the redspotted sunfish,” said Trent Thomas, a streams biologist with IDNR’s division of fisheries. “Having these fish in public aquariums will bring attention to the species and draw attention to the threats it and other vulnerable species face and what needs to be done to protect and/or recover these species.”

After viewing the fish at Four Rivers, Thomas said he hopes people will realize there are things they can do on a personal level to help threatened and endangered fish species.

Jerome Gabriel, Forest Preserve facility supervisor at Four Rivers, said he was happy to add a dozen redspotted sunfish at IDNR's request to the mix of native river fish in the aquarium.

“Our site was recommended, not only because we have this gorgeous 2,000-gallon aquarium, but because we also represent a natural resource region that would have originally supported this fish.”

The redspotted sunfish once lived in the types of waters found around Four Rivers, he explained. But that is no longer the case. Including the redspotted sunfish in the aquarium will help initiate a conversation about the species and its threatened status, Gabriel said.

“We host the fish as an animal ambassador to be able to talk about the impact of industrialization of waterways and the efforts IDNR is making today to reestablish populations of the animal,” he said.

The new aquarium at Four Rivers features around 50 fish including bluegill, crappie, small-mouth bass, walleye and channel catfish. Gabriel would like to add gar and pumpkinseed sunfish to the tank in the months to come.

“The public loves the aquarium, especially kids,” Gabriel said. “We feed the fish three times a week, Mondays (when the building is closed), Wednesdays and Saturdays. And it’s always a highlight to do feedings when there are families in to watch.

“Most families, if they have a fish tank at home, it houses goldfish or beta,” Gabriel added. “Being able to view the large native fish from the area is kind of unusual. And the quantity of fish we have here is something people don’t often get to see.”

The redspotted sunfish is only 6 to 7 inches long and it has horizontal rows of red-orange spots in males and yellow-brown spots in females. The sides of the fish's body are dark olive but its belly is yellow to red-orange.

Since March 2010, a total of 17,257 redspotted sunfish have been released in wildlife areas and preserves around the state and more were stocked in refuge populations. Because of these efforts and those of other organizations, the species was moved from the endangered list to the threatened list in 2020.

In its native habitat, redspotted sunfish inhabit quiet, sluggish, well-vegetated streams, oxbows and backwater lakes, Thomas said. The species is struggling because of the deterioration of water quality, reduction of aquatic vegetation, and draining of swamps and bottomlands.

“These threats include levees that isolate backwater habitats from large rivers, the draining of their preferred habitats for development and agriculture, and invasive species that uproot or consume aquatic vegetation,” he said.

“Every species lost results in higher vulnerability and potential ecosystem collapse,” he said.