It may be off the beaten path, but Laughton Preserve's 430 acres has a rich and colorful history

The 430-acre Laughton Preserve, located on Wallingford Road in Wilton Township, contains remnants of land that present a rich and colorful history.

When the first settlers arrived in Will County in 1830, native Potawatomi had been living in the Great Lakes region for 400 years. The Prairie Potawatomi, as they are known by today’s descendants, “was an autonomous and prosperous group living off the bountiful natural resources of the Great Lakes,” according to the Prairie Band Potawatomi Nation website, www.pbpindiantribe.com.

In 1830, President Andrew Jackson signed into law the Indian Removal Act. Intended largely to move native peoples who still resided in the southeastern states, the Act authorized the president to grant lands west of the Mississippi River to tribes who agreed to give up their homelands.

The Prairie Band website states that “the policy revolved around a dream that the Indian ‘problem’ could be eliminated forever by persuading the eastern Indians to exchange their lands for territory west of the Mississippi. The exchange would leave the area between the Appalachians and the ‘Father of Waters’ free for white exploitation and settlement.”

As part of this goal, the United States government concluded a series of treaties with the Potawatomi that granted in some cases reservations east of the Mississippi where Potawatomi could remain. One of these treaties, signed at Camp Tippecanoe in Indiana in 1832, dealt with lands extending southward from Chicago to the Kankakee River. 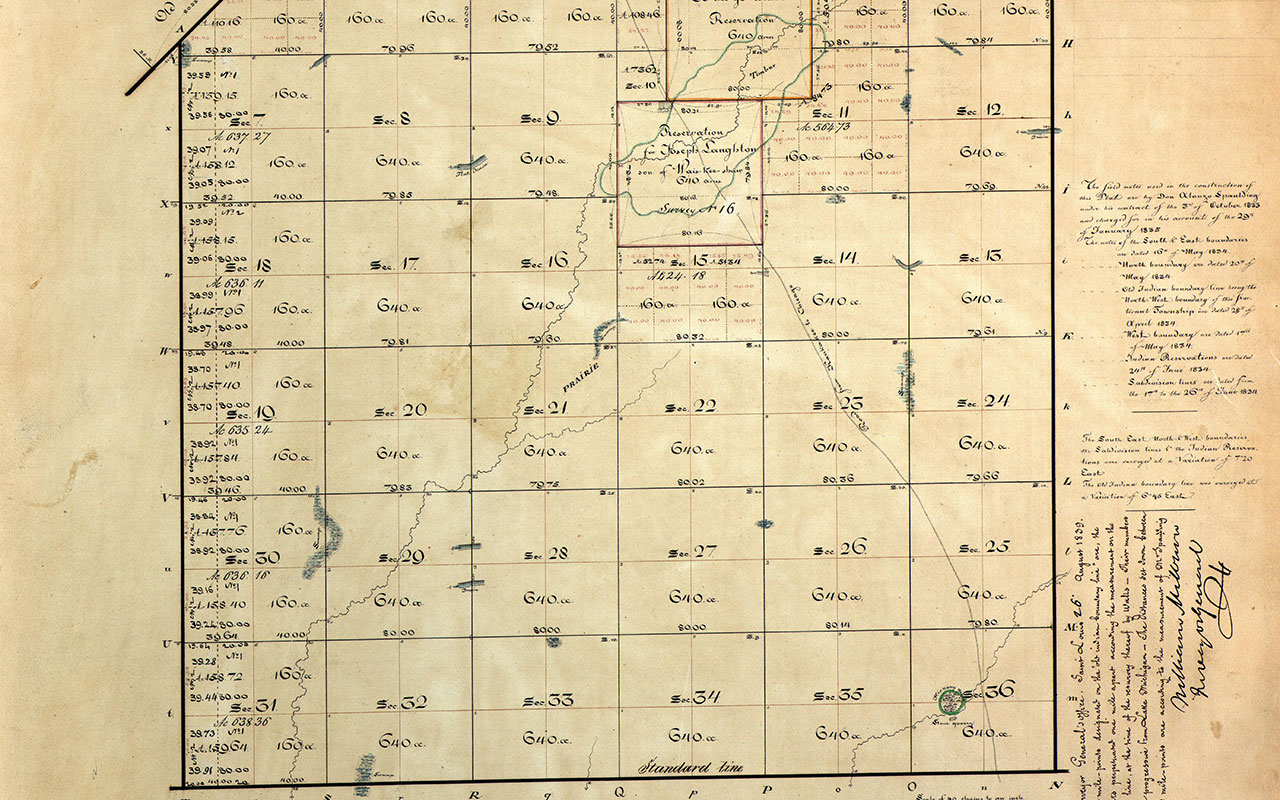 Of the two dozen reservations created by the treaty, one was granted to Joseph Laughton and another to Ce-na-ge-wine. Research by the Southern Illinois University at Carbondale Center for Archaeology Investigations for An Archaeological Survey of the Laughton and Ce-Na-Ge-Wine Reserves, commissioned by the Forest Preserve District of Will County, discovered that Joseph Laughton was the mixed blood son of an Anglo-American fur trader, David Laughton, and a Potawatomi named Wais-ke-shaw, the daughter of a locally famed chief, Shaw-was-nas-see. According to this research, Joseph Laughton was only six years old at the time the reservations were established and, in actuality, the land was granted to his father. Ce-na-ge-wine was the son and successor to Potawatomi tribal leader Senachewine the Elder. Each parcel granted would be located at Twelve Mile Grove, or Na-be-na-qui-nong. This land consisted of a total of 1,280 acres.

Twelve Mile Grove, what is today Wilton Center, was a notable landmark in Will County. According to the History of Wilton Illinois, 1907, “There was no part of Will County that was better known in early times than ‘Twelve Mile Grove’. . . . True there was prairie all around, but that was not thought of. It was at Twelve Mile Grove where everybody in that section lived, and it was there that all went, who went in that direction. It was a famous locality in many respects. It was a large one, covering some square miles in its original state, and furnished lumber and fuel for all who wanted it. In the early days of the grove, it was one of the finest tracts of timber in all northern Illinois . . . in the beauty and size of its black walnuts, oaks and hickories, and they furnished the early settler with all the timber and fuel needed for a year. Then it was a famous hunting ground for deer and wild turkeys, while the prairies abounded in chickens and other small game. It was an Indian reservation and the trail to the Des Plaines timber in the Kankakee River led directly through it, and thus it was a great highway of the natives in their journeys to the south and east, the grove furnishing to them an excellent camping place, in which to erect their tepees and replenish their stock of provisions. A branch of Forked Creek runs through the grove. . .and no better camping place could anywhere be found than on the smooth banks of that stream.”

The village referenced in the Treaty of Tippecanoe, Na-be-na-qui-nong, existed in Twelve Mile Grove at the time of the treaty.

Even though the treaty granted natives rights to Twelve Mile Grove, the Potawatomi voluntarily left four years later, in 1836.

“They simply abandoned their lands here, not because of any encroachments by the whites, nor because of their inability to hold the title to the land. . .but, perhaps, because they did not like the idea of being separated so far from others of their race” who had already moved to new lands west of the Mississippi River, speculates the History of Will County, 1878.

The concept of reservations must have been difficult for the Potawatomi to grasp. According to the Prairie Band website, “During this time of advancing settlement, the Potawatomi people held no real concept of land ownership. Their beliefs taught them that land belonged to all living things alike. However, the U.S. Government, in its first treaties with the Indians, established boundaries for tribal land.”

Having been occupied for many generations of Potawatomi, Twelve Mile Grove contained “many traces of the former occupation” by the native tribes when the first settlers arrived, records the History of Will County, 1878. “Among the most interesting of these, illustrating their methods of sepulcher [burial], were the tombs of three Indians, supposed, from the profusion of their decorations, to be chiefs. The sepulcher. . . consisted of a little pen, built up of small sticks, laid one upon the other, to the height of above four feet, being from four to five feet square. The whole was covered with sticks, weighed down with heavy stones. And therein, on a kind of stool, sat the three ‘poor Loes,’ looking lonesome and ghastly enough. The cracks between the sticks composing the pens were sufficiently wide to admit of inspection, while being too small to allow of their being disturbed by wild animals. In this position, these ghastly remains sat in all of their feathers, beads and jewelry, with the flesh decaying from their bones, for a number of years, till at length a foolish lad, who lived in the neighborhood, upset their bones about the surrounding country.” 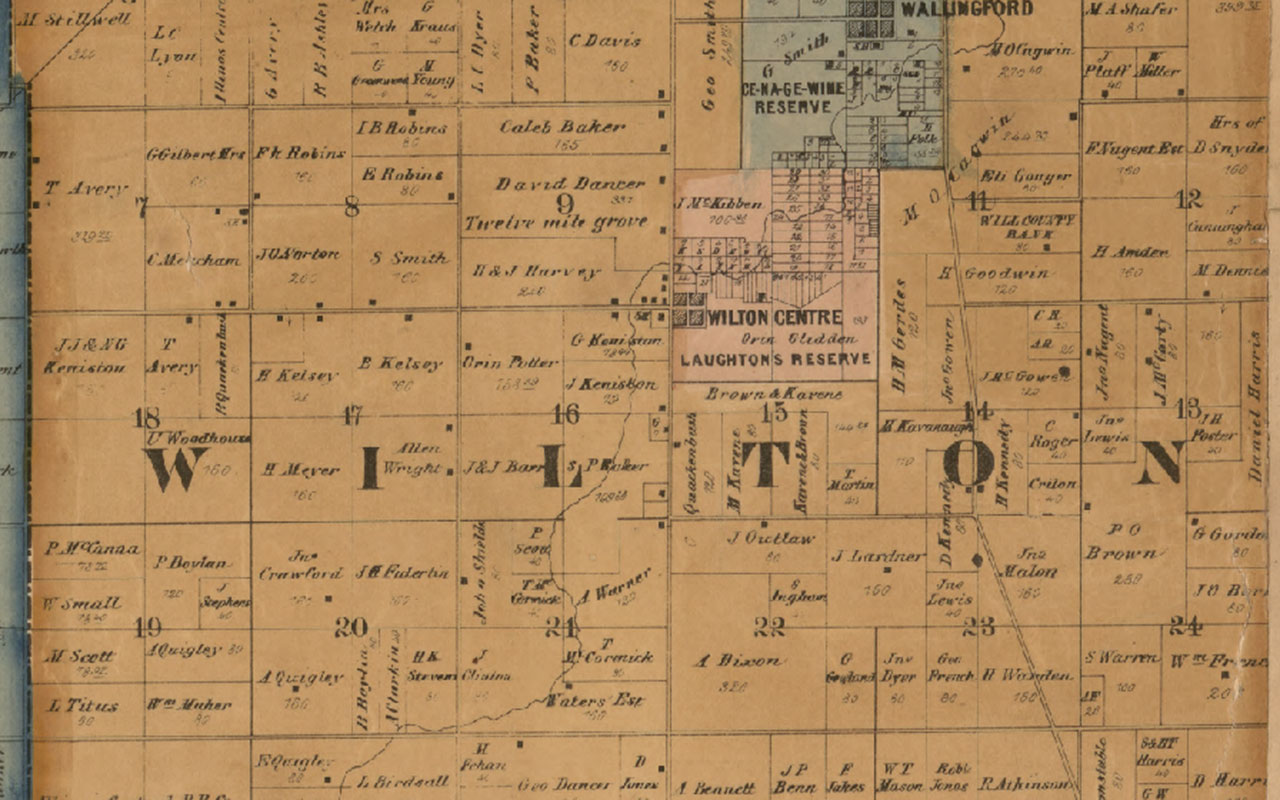 The History of Wilton, Illinois, 1907 also reports on the Potawatomi methods in which small children who had died were entombed. “Another way of disposing of the bodies of small children that had died was to build a sort of nest of sticks up in the crotch of some large tree, some distance from the ground, and there place the body. It was then covered and the covering fastened on with strips of bark. When the first settlers came to the country, those ‘nests’ were often seen in the trees, looking much like large squirrel nests of the present day.”

One of the early settlers at Twelve Mile Grove was a notorious figure, Rueben Putnam, who was known as “Old Put.”

“Putman had a reputation of being a horse thief, a cattle, pig and sheep thief, and a robber of all kinds of goods on which he could lay hands,” according to the History of Will County, 1878. It was widely believed that Old Put had excavated “an underground stable in which he concealed his ill-gotten gains, and in which he accommodated members of a then numerous gang of horse-thieves that infested the country. . . .Suits numerous had been brought against him; indictments had been procured; and all legal measures had been tried to bring him to justice, but always to the defeat of those instituting such proceedings.”

So seven locals “entered into a compact to rid the country of his presence. One day in June, 1853, Old Put was plowing corn in his field, when suddenly, what to him appeared to be an Indian, grappled his arms from behind and held him fast; then another [man]… appeared with a tar-bucket, and [yet] another… came up with a bag of feathers. Quicker than it takes to tell it, two or three more [men] stripped him of his clothing, and a pair of sheep shears [was] applied to his scalp, divesting him of his hair. In four minutes from the time of commencing the operations, Mr. Put presented a striking appearance. So much [so]… that the boys who took part in the work were really struck with fear. He had been covered from head to foot with the tar and feathers; and to add to the Satanic appearance as if having just issued from the ground, they had rolled him in the fresh-plowed dirt. After the work had been completed, he was asked if he understood the meaning of these proceedings, and upon giving an affirmative answer, he was told that he would be allowed just ninety days to settle up his business and get out of the country, and was assured that if he were found in the neighborhood at the end of the period named, the seven had sworn an oath never to rest day or night until he was quartered. At the end of the eighty-seventh day, it was noticed that Put still lingered, as if loath to leave the scene of the drama in which he had taken so prominent a part; but after that date he was a stranger to Twelve-Mile Grove, having suddenly vanished.”

The history of Twelve Mile Grove also includes a short-lived town known as Wallingford. According to An Archeological Survey of the Laughton and Ce-Na-Ge-Wine Reserves, Wallingford was founded at the northeast end of Twelve Mile Grove by settlers in the 1830s and 1840s. “By the 1870s, however, it had become a monument of blasted hopes, consisting only of a little trading point, with a score of houses, a store and a few shops.” The town remained isolated and never experienced the growth that was originally desired.

As more settlers came into adjoining areas, quarrying for limestone occurred in the northwestern portion of Laughton Preserve. The Archeological Survey discovered “Three water-filled limestone quarry pits, two to the north of Forked Creek and one to the south.” While Will County records do not identify the owners or operators of these quarries, a quarry could have been in operation in the early 1850s. A stone schoolhouse that dated to 1850 “was reportedly constructed of stone which was taken from a quarry nearby, the stones being raised and hauled by different parties, who gave their time and labor to the enterprise. Further, a description from 1870 of the location of these quarries indicates that the water-filled quarry pits contained within Laughton Preserve represent the remains of the quarry. 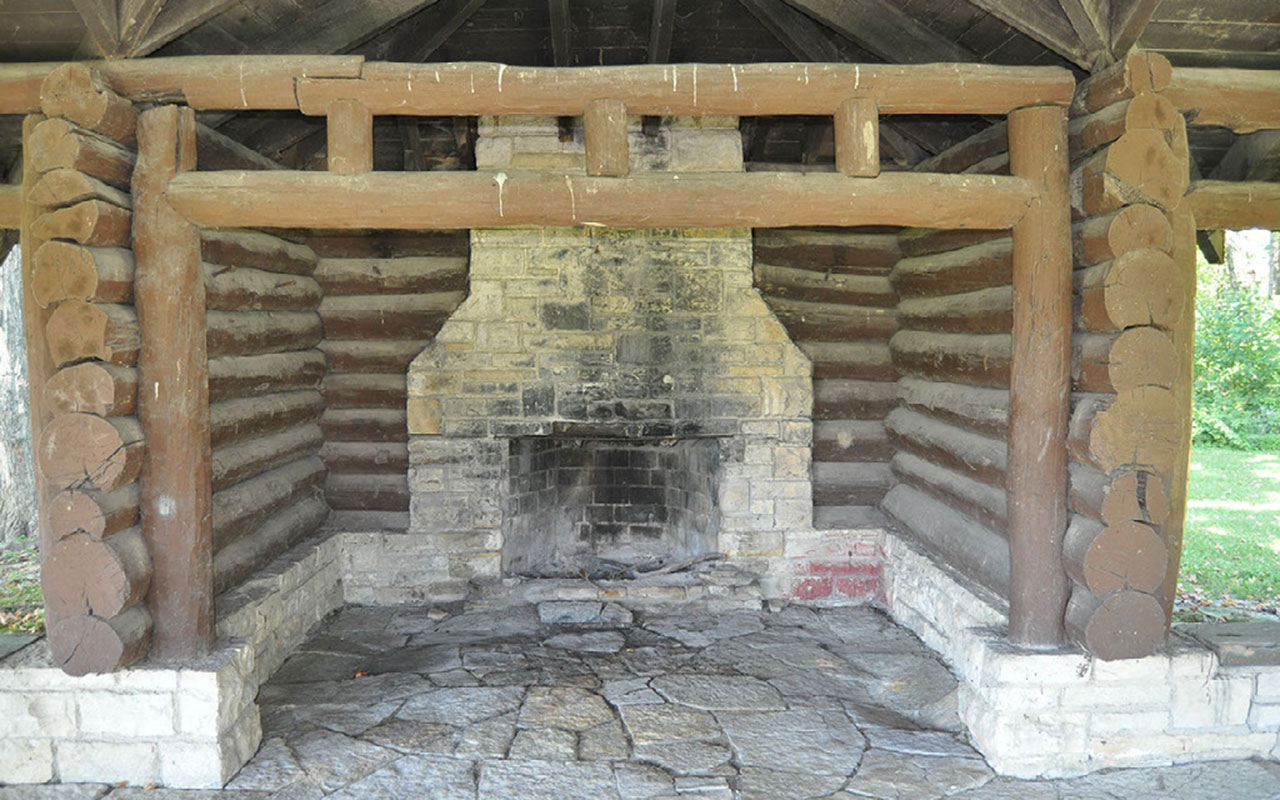 The inside of the preserve's historic picnic shelter, which was built by the Civilian Conservation Corps in the 1930s. (Photo by Glenn P. Knoblock)

The preserve, as it exists today, includes about one-half of the original Laughton reservation. The Forest Preserve District purchased the first parcel of property – 8 acres total – that would be Laughton Preserve in 1931 from the Gerdes family. Gerdes Grove remains the sole access to the preserve, which is now 430 acres in size due to extensive land acquisitions by the Forest Preserve in the 1990s and in 2006.

While remnants of that settlement are long gone, the history of this place lives on as being one of the most remarkable landscapes in the earliest days of Will County.