Forest Preserve police officers never know what might await them on any given workday while patrolling the preserves.

While on the forest beat, they have searched for missing persons, reunited lost or injured pets with their owners, recovered stolen credit cards, arrested criminals, attended a forensic entomology course, changed flat tires and waited with stranded motorists for a tow truck to arrive. Those duties come on top of their everyday police work, which includes making arrests, writing citations and enforcing state laws and local ordinances.

They also have given back to the community by participating in a wide variety of charitable events ranging from Cop on a Rooftop to the Law Enforcement Torch Run.

Those are just a few examples of the challenges and accomplishments Forest Preserve District police officers have tackled day in and day out through the decades.

The department is celebrating its 40th anniversary this month and the unit has evolved and modernized as the District has grown. Forest Preserve police serve a special role of not only assisting and protecting visitors, but also guarding the District’s 22,500 acres and the flora and fauna that live there.

Created out of necessity 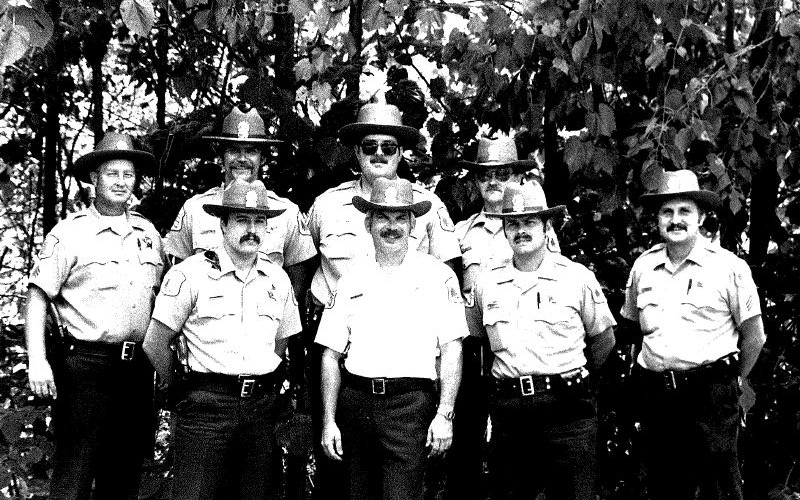 Chief Rich Law and some of the first Forest Preserve Officers

Prior to the creation of the department, a lone Will County Sheriff’s Police deputy was tasked with patrolling the preserves. But as the preserve acreage grew and the county’s population increased, the District needed its own police force so that citizens could continue to visit the preserves with the comfort of knowing officers were available for assistance, said Police Chief Tracy Chapman.

“The Forest Preserve police department was created on April 8, 1981, by the Forest Preserve’s Board of Commissioners out of necessity,” Chapman said. “Over the years we have come a long way. We are in line with our peers with technology, equipment, officer wellness and training. Our officers are dedicated to the protection of preserve visitors. They are also nature lovers who want to preserve these properties to the best of their abilities.”

Here are a few examples of how Forest Preserve police handle the challenges and opportunities of their jobs: 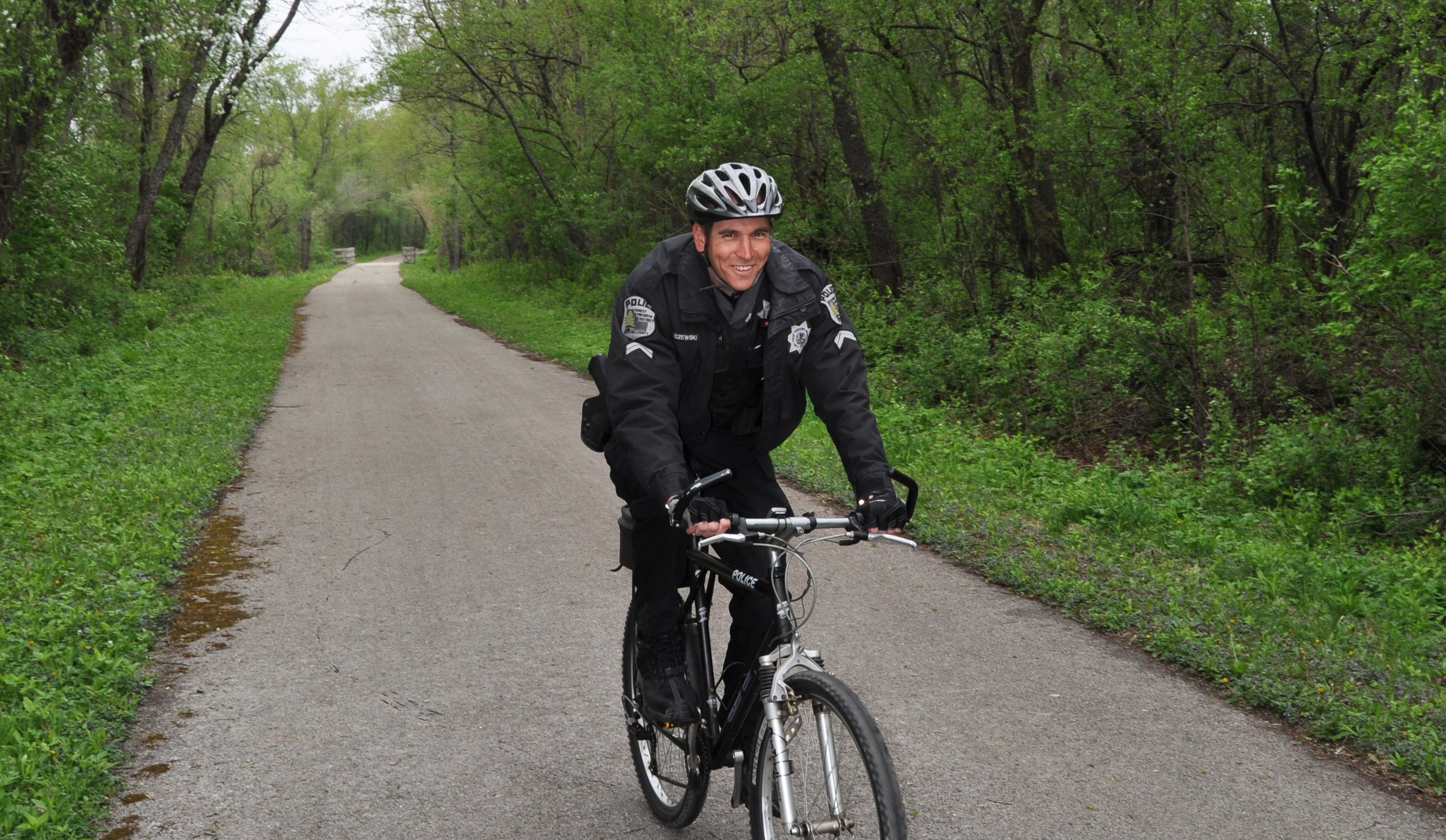 In June 2016, Sgt. Dan Olszewski received a call regarding a missing person who was a possible suicidal subject in Plainfield. Olszewski found the subject on a bridge over Interstate 55.

“As I approached the subject, he was on his cell phone and put one leg over the bridge and told me not to come any closer,” Olszewski wrote in his report. “I ignored him and got next to him and he put his phone down and said to stop or he would jump.”

Fearing for the man’s safety and the motorists below, Olszewski grabbed the subject by his arm and pulled him off the edge.

“He resisted and kept pulling away trying to get back to the edge of the bridge. I kept trying to keep him from lunging over the edge by pulling him toward the ground, but he slipped out of his shirt and got free. At this point I stayed close enough to grab him again if I needed to but decided to try to talk to him since he stopped trying to go over and just stood by the edge.”

Olszewski kept talking to the subject and eventually Olszewski and a sheriff’s deputy, who arrived on the scene, got the man to walk off the bridge. Olszewski retrieved a knife from the man’s pocket and Plainfield police transported him to the hospital for treatment for self-inflicted wounds. 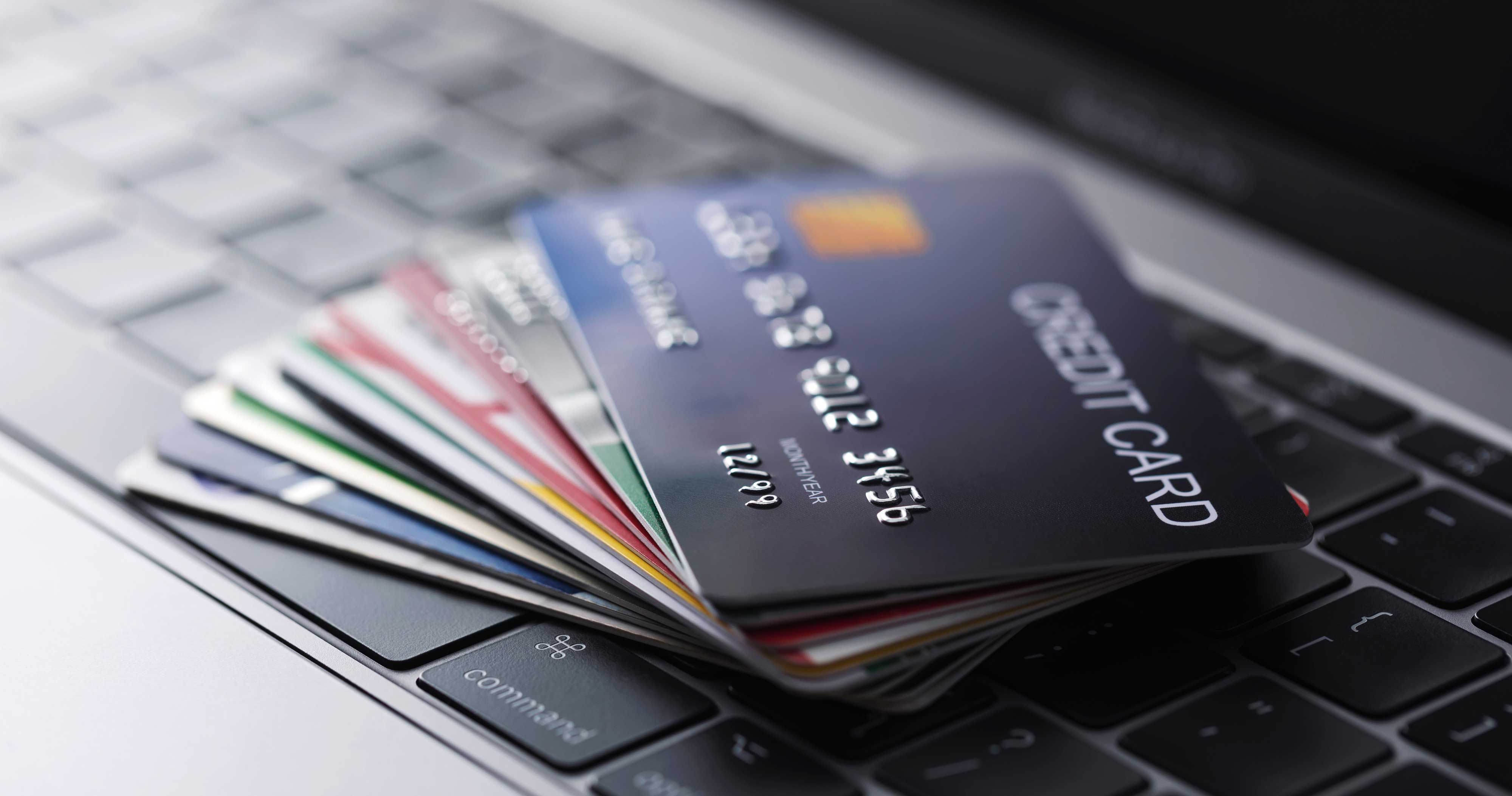 After a series of vehicle burglaries at a Plainfield forest preserve, Forest Preserve Police arrested three people in August 2018 and charged them with the crimes. The suspects were booked into the Will County jail on multiple burglary to motor vehicle charges.

The arrests were made after police received a call from a woman who said someone broke her car window and stole her purse while her vehicle was parked in a preserve. Officers who arrived on the scene advised the victim to call her bank to see if any of her credit cards were being used. One card had been used at a shop in the Louis Joliet Mall. Police responded to the shop, and with the help of Joliet police and mall security the three suspects were apprehended.

In addition to that case, a man was caught after breaking into several vehicles on multiple occasions in Frankfort. Forest Preserve police officers were able to track the thief, arrest him and he was then sentenced to 10 years in prison. 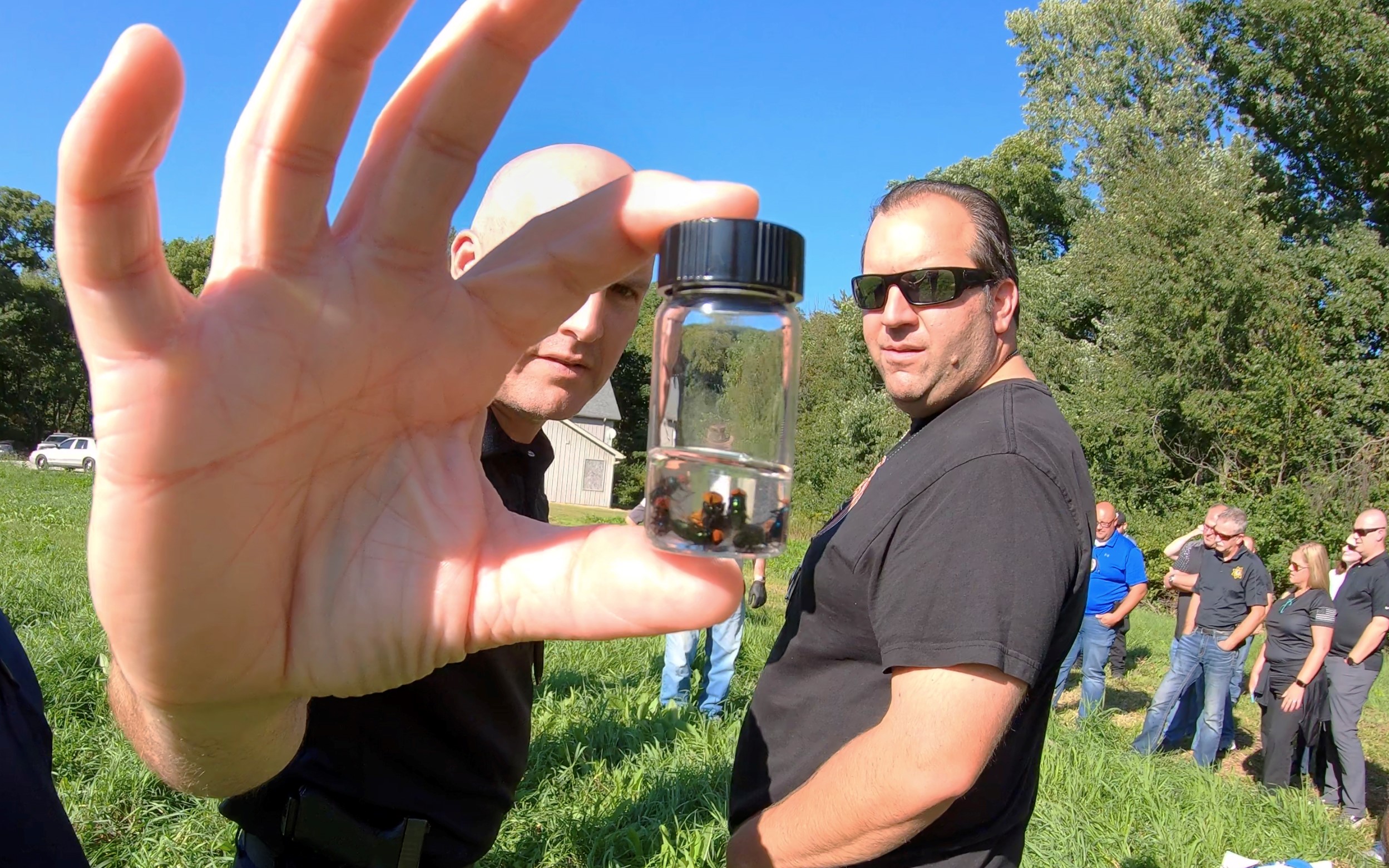 The Forest Preserve’s police department hosted 30 death investigators who scooped, plucked and netted insects from pig carcasses during a forensic entomology workshop at one of the District’s rural preserves in September 2019.

Area law enforcement representatives learned how to estimate the time of a person’s death based on the types of insects and the stages of bug larvae – including maggots – that can be found on corpses.

Pig carcasses in various stages of decomposition were placed in the unimproved preserve for educational purposes in a partnership between the Forest Preserve District and the Tri-River Police Training Region organization. Forest Preserve police contacted local pig farmers who agreed to donate already-deceased specimens for the workshop.

Forest Preserve Police Sgt. Rick Lewandowski said he helped organize the workshop and included the field training opportunity because he believes in the value of forensics, which is the use of science in criminal investigations.

“This type of information is hard to simulate, so it was important for us to make the hands-on experience as realistic as possible,” he said. 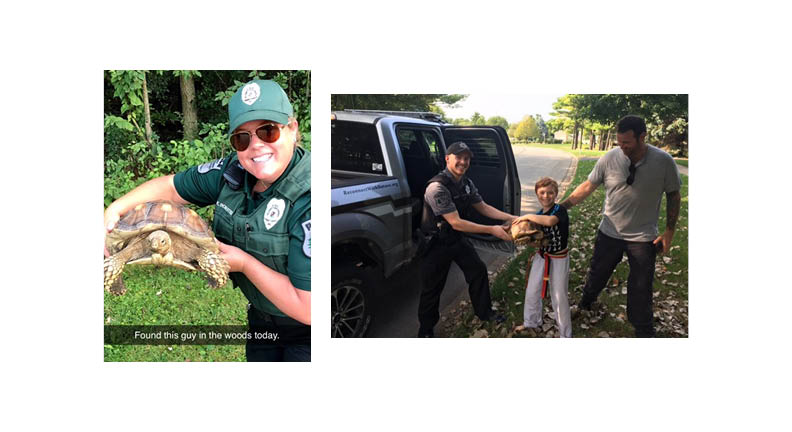 A tortoise that was lost in Hammel Woods was successfully reunited with its Shorewood family after a Forest Preserve community service officer helped solve the missing reptile case in September 2020.

The tortoise was found munching on some grass at Hammel Woods. When the tortoise was discovered and reported to police, community service officer Kelly Robertson posted information about the found creature on her Facebook page. A friend of the missing tortoise’s owner saw the post and linked the two women. Eventually, the tortoise was reunited with his family and Robertson worked on her day off to make sure the tortoise was returned to his home. 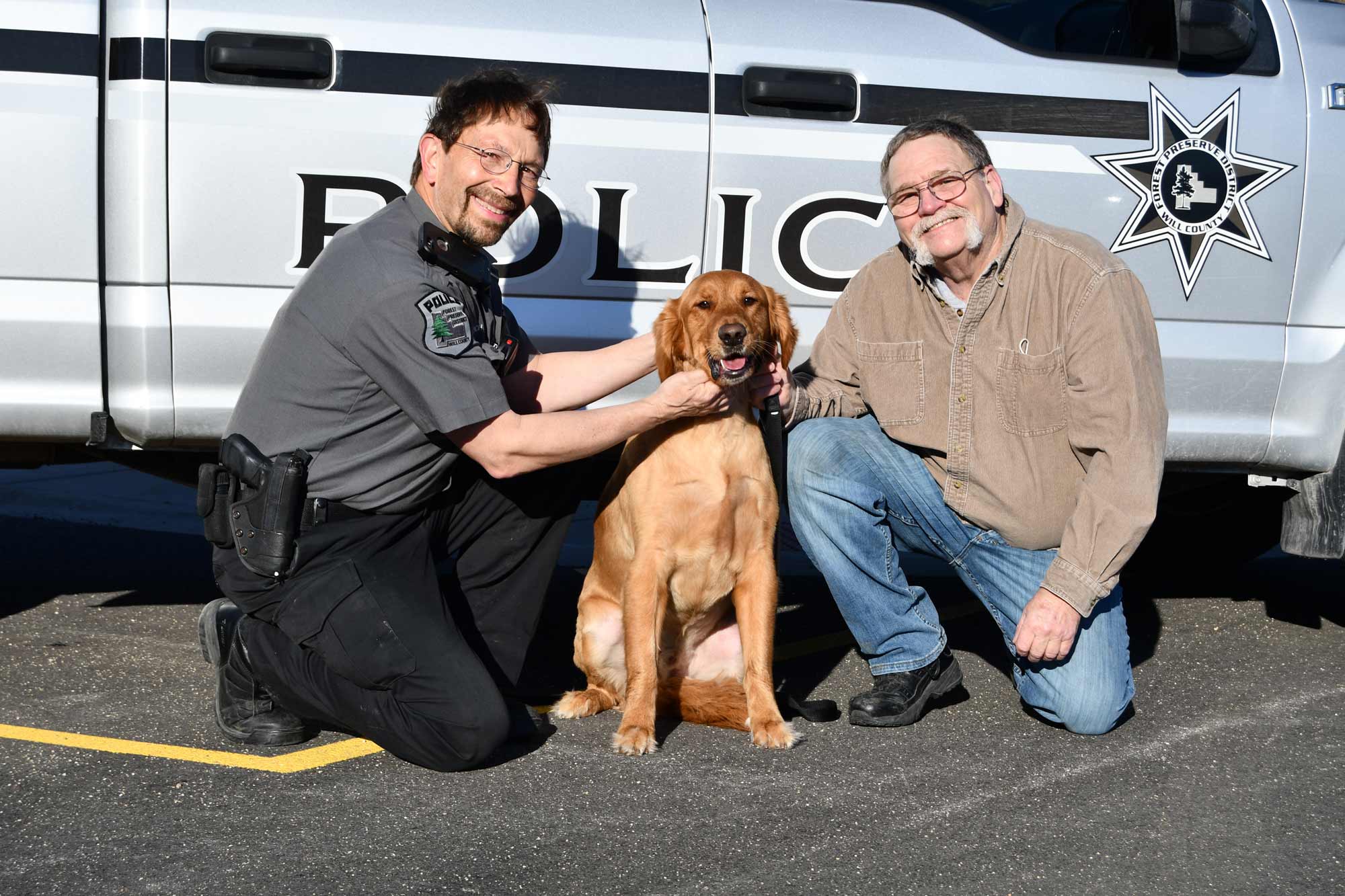 Forest Preserve Officer Dan Rankovich assisted with the rescue of a golden retriever that fell through the ice at Monee Reservoir in March 2021.

The dog’s owner called 911 when his pet Rocco ran out onto the lake’s ice to chase geese and fell through into the frigid water. The first to arrive on the scene was Rankovich, who summoned the Monee fire department once he found out the dog was in the water and not just on top of the ice.

“That guy is just a blessing,” Rocco’s owner, Kim Jones, said of Rankovich. “He coordinated with the fire department and let them know what was happening. And he was on the bank screaming, ‘Rocco keep your head up, keep your head up.’”

Rankovich, a former Mokena police officer, also kept the dog's owner from trying to enter the water in a boat, which could have been dangerous and put Jones in jeopardy. “Officer Dan took charge and he let the fire department know where the dog was at,” Jones said. “Dan was just awesome.”

Four firefighters entered the water in ice rescue suits and Rankovich and others on shore were holding ropes that were tied to the rescuers. After the dog was pulled from the water, firefighters handed the cold canine to Rankovich and he brought Jones the dog. 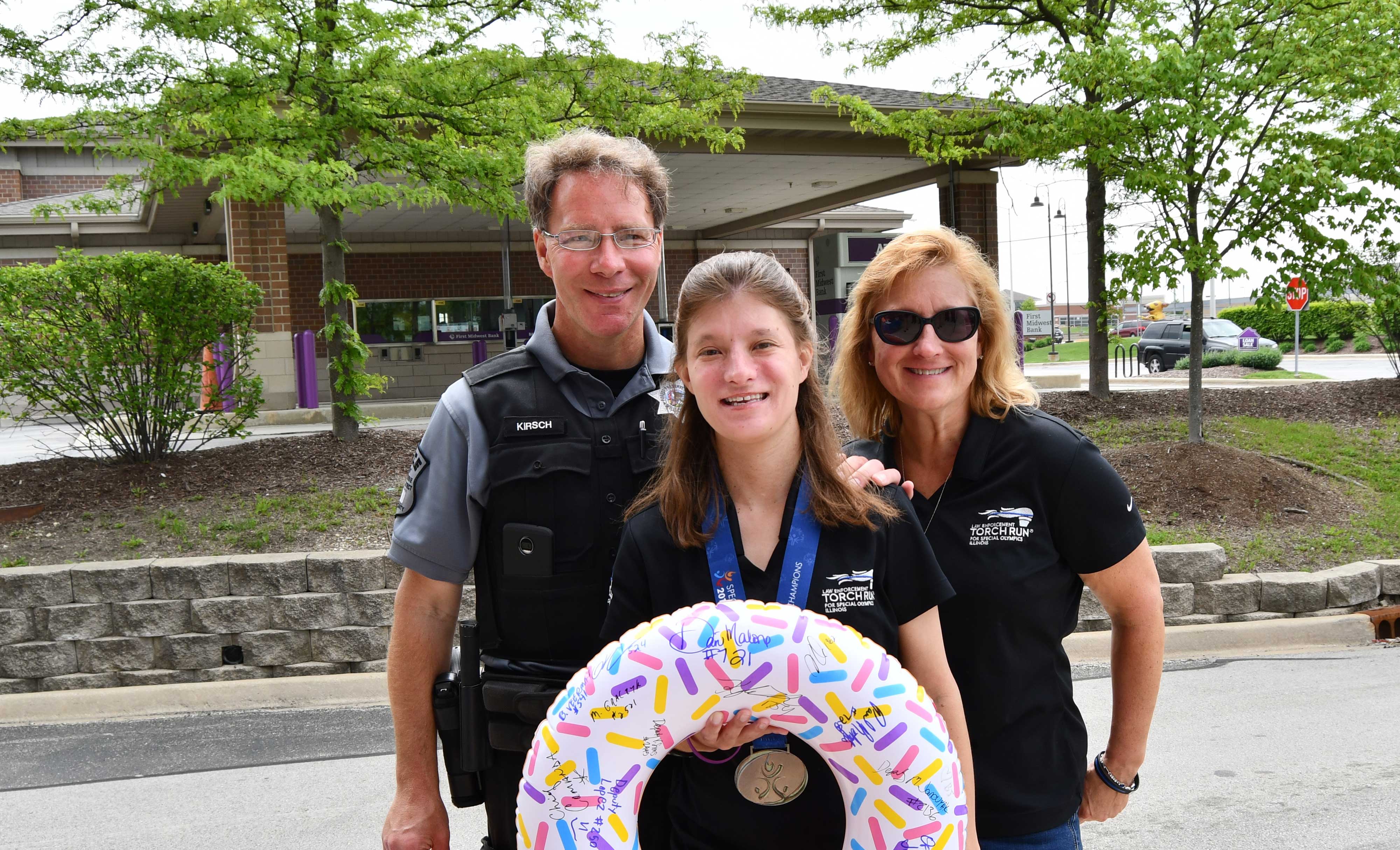 The Forest Preserve’s police department also takes part in Special Olympics of Illinois – Law Enforcement Torch Run, Tip-a-Cop, Polar Plunge, LETR Plane Pull and the National Night Out, which will be held this year on August 3 at Monee Reservoir. The COVID-19 pandemic changed the way officers participated in 2020, and some of the fundraisers were virtual, but the charity work continued.

In the past three years, the department has raised $30,270 for Special Olympics by participating in Torch Run fundraisers.

“As representatives of the Forest Preserve, we take pride in supporting organizations that promote inclusion,” Chapman said. “A huge part of policework is community outreach. We understand the importance of participating in community events and encourage others to do so. Making contact with citizens outside of enforcement actions promotes positive relationships within the community, encourages beneficial partnerships and decreases tensions.”

Officer Steven Kirsch has been a driving force behind the District’s involvement in the Special Olympics fundraisers.

“I've seen firsthand how Special Olympics impacts the Special Olympic athletes by attending, volunteering and officiating at numerous Special Olympic events,” he said. “Seeing the joy on the athletes' faces is my main reason for participating. These activities also are a good way to show the community that peace officers are good hearted people and it's also a good team bonding experience for the law enforcement agencies involved. Plus, it's fun!” 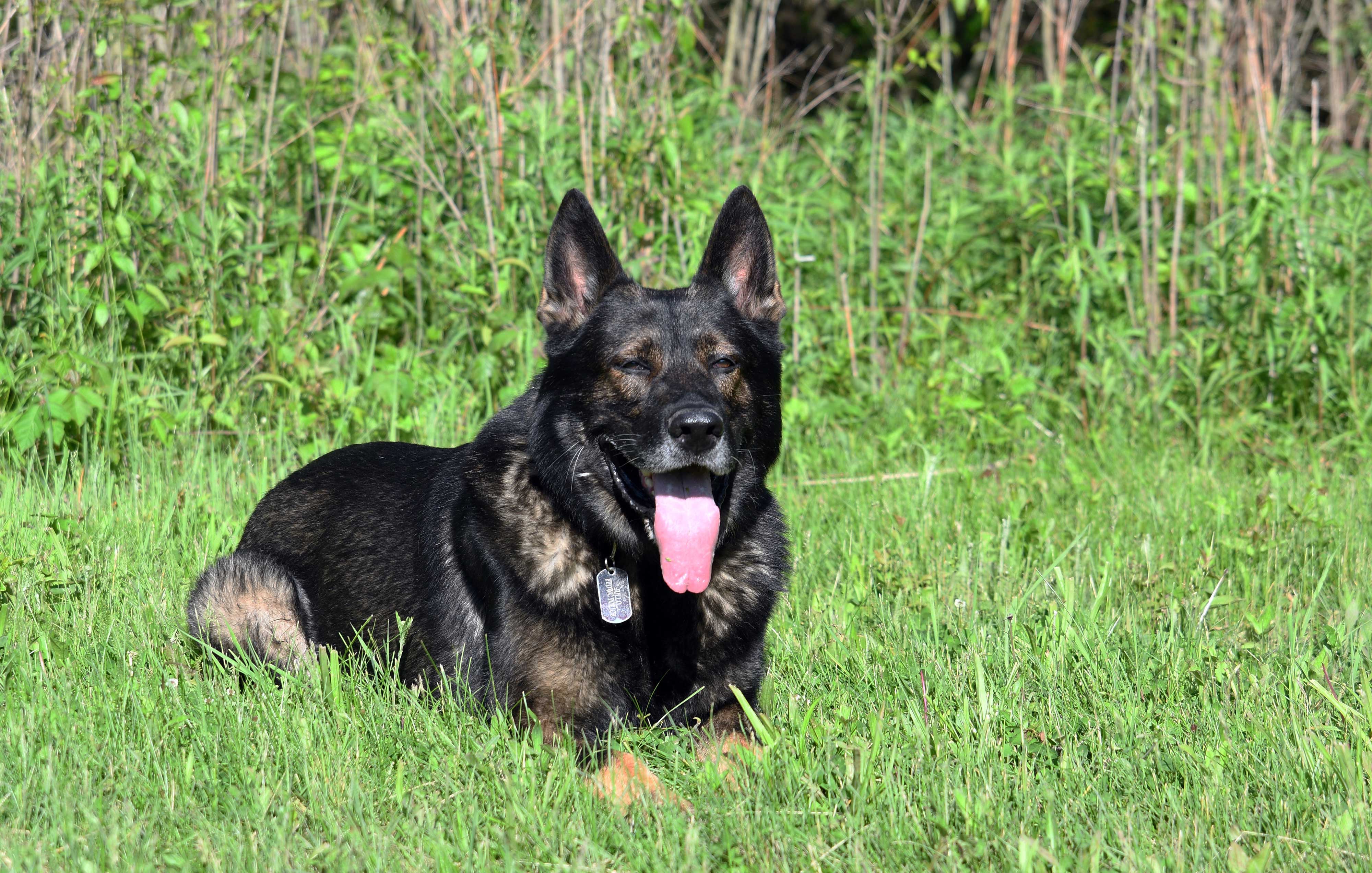 Police K-9 Jullo retired in 2020. He will live out his retirement with his handler, former K-9 officer and Forest Preserve police Sgt. Dean Klier, who took a new position with Plainfield police. (Photo courtesy of Chris Cheng)

In addition to these examples of Forest Preserve police in action, the officers also: Assisted on bank robbery and drug search cases with Forest Preserve K-9s Rosie and Jullo; searched for missing persons including Stacy Peterson and Lisa Stebic; and sent a skull to the Smithsonian to help ID an unsolved suicide from 2008 in Thorn Creek Woods Nature Preserve.

“It’s definitely worthwhile being involved in specialized units,” explained Forest Preserve Police Sgt. Matt Yates. “I’m part of ILEAS (Illinois Law Enforcement Alarm System) region 3C, which is a mutual aid team comprised of officers from all over the state of Illinois. Not every officer is on a specialized unit, so I’m honored to have the opportunity to be a part of something where I can make a difference outside of my normal work routine. The connections I have made with other officers on my unit have helped the Forest Preserve District on multiple occasions when we call for assistance. And the experience I have gained from being on a specialized unit has not only made me a better officer, but a leader when an incident occurs related to my specialty.”

“These accomplishments are all the result of our officers conducting proactive patrols and showing an omnipresence in the preserves,” said Forest Preserve Police Lt. Dave Barrios. “We have a great team of men and women who come to work to help make the forest preserves a safe place to visit.” Forest Preserve police use boats, ATVs, gators, snowmobiles and bicycles to patrol the preserves.

The department also launched the “Eyes, Ears and Cellphone” program, an initiative that encourages preserve users to stay aware of their surroundings, to call 9-1-1 in an emergency and to save the non-emergency phone number – 815.727.6191 – in their cell phone contacts for quick access.

“When you read about all the ways Forest Police officers protect the preserves and their visitors, it’s clear that the Board made the right decision 40 years ago to create this specialized law enforcement unit,” said Cindy Cain, the District’s public information officer.

“The Forest Preserve’s police department is an integral part of the District’s mission to protect preserve visitors and Will County’s natural resources,” Cain added. “And whether it’s a wandering tortoise, a dog fighting for its life in icy waters, a preserve visitor with a flat tire or a serious threat to human life, the police department’s officers respond with a base of knowledge that has been honed for four decades."