The preserve offers breathtaking views, thanks to bluffs that were carved from mining more than 100 years ago

In the early 1800s, Potawatomi Chief Keepataw and his nomad tribe settled in the region around today’s Lemont. This area of the Des Plaines River Valley was “an ideal setting because they had hunting and fishing and the waterways for transportation,” said Susan Donahue, the coordinator of the Lemont Area Historical Society museum, in a My Suburban Life article.

Chief Keepataw was a sub-chief of Chief Yellowhead, leader of the Potawatomi tribe residing in the Kankakee River region. Keepataw’s tribe was friendly with the early settlers and reportedly warned them of inter-tribal wars. Eventually however, the continuing inflow of new inhabitants led the Potawatomi to desert the area by the mid-1800s. Settled in 1836, Lemont was originally known as Keepataw after the Potawatomi chief. While the village’s name changed through the years from Athens to Palmyra before selecting Lemont in 1850, the forest preserve located in that area retains the town’s earliest title, serving as a reminder of the territory’s history.

Visit Keepataw Preserve today and you will be treated to one of the most breathtaking views available in any Will County forest preserve. After a short walk from the parking lot, you arrive at the overlook, placed atop sheer 60-foot-high bluffs, that offers a panoramic view of the Des Plaines River Valley.

“I don’t think that I have ever been more thrilled or enthralled by any one thing as I was by the vast primeval panorama that spread before me,” wrote John J. Schauer of the Will County Historical Society in 1972.

“I would say that this is the only intact and unspoiled segment of the Des Plaines River valley still extant within the boundaries of Will and Cook Counties,” Schauer wrote at the time.

But far off in the distance is an object that catches your eye: a single smokestack from an old kiln rises from the uninhibited vegetation that surrounds it. This remnant is among the few remains of a limestone quarrying and processing operation that worked six different sites along the Des Plaines River from 1889 to 1918. The bluffs of the preserve were literally carved from the mining that took place around the turn of the century. 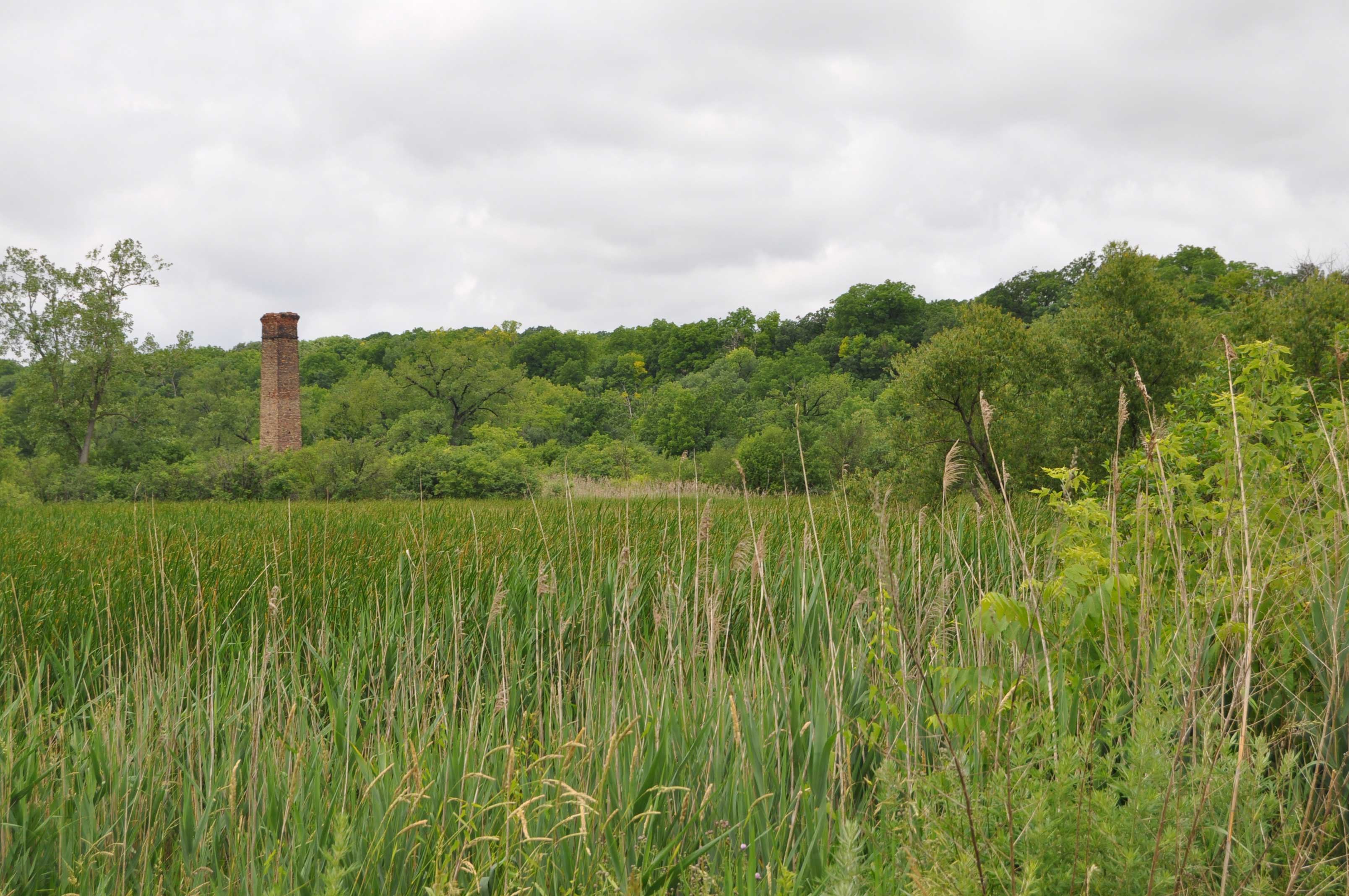 The Keepataw site was part of the vast holdings of the Western Stone Company, “the largest company of its kind in America,” according to Unrivaled Chicago: Containing an Historical Narrative of the Great City's Development and Descriptions of Points of Interest, published in 1896.

The quarrying of limestone throughout the Des Plaines River Valley dates to the 1830s and 1840s when excavation of the I&M Canal between Chicago and LaSalle-Peru revealed extensive outcroppings of dolomite limestone. The formation of this valuable stone is described in the online publication, Architectural Resources in the Lemont Historic District. “Four hundred million years ago, Illinois was submerged under a Silurian sea where the shells of microscopic plants and animals accumulated and eventually formed strata of rock. In the Des Plaines River Valley, expanses of smooth-textured rock of the Sugar Run Dolomite lay just beneath shallow topsoil. Dolomite is a calcium-magnesium carbonate rock with properties very similar to limestone. Generally harder and finer grained than ordinary limestone, its suitability for building was recognized, and it began to be quarried in the 1830s. The excavation required for the building of the I&M Canal, which opened in 1848, uncovered additional stone beds. Local contractors were awakened to the potential richness of high-quality stone that could be so easily removed. Buff white when freshly quarried, dolomite can be polished to a smooth finish and was marketed as ‘Athens Marble’ and ‘Joliet Marble.’”

The popularity of dolomite as a building material grew during the 1850s as the I&M Canal and expansion of railroads facilitated transportation of the stone. “ … Joliet and Lemont, and to a lesser extent, Lockport, (became) prime suppliers of limestone to Chicago,” notes a report titled Historic Documentation Record, Western Stone Company prepared by the Illinois State Toll Highway Authority and written by Karen Poulson. “As local historian Fayette B. Shaw has written, ‘by the beginning of … 1856, there were 8 quarries being worked in and around Joliet, the smallest of which employed 5 men, the largest 48.’”

The Great Chicago Fire of 1871 provided an enormous market for dolomite, to rebuild the city “in a fireproof  manner,” in the words of the Historic Documentation Record.

But this prosperity was not to last. “By the 1890s, other building materials had largely supplanted Joliet/Lemont limestone in construction,” the report notes. “Beginning in the early 1870s, an increasing number of building stones were available in the Chicago market. Among these was the more durable limestone of Bedford, Indiana.”

It was during this period of decline that the Western Stone Company was formed. The six area quarries were acquired and the company formed in 1889. In 1891, Martin Madden joined the firm. Madden “was a product of the Des Plaines Valley quarries,” Poulson writes. “He had begun his career at ten as a water boy in the quarry of Edwin Walker. Over the following eleven years, he rose from that position to general manager and chief draftsman.” He advanced through a variety of positions – financial manager, vice president and general manager – and entered the world of politics as a Chicago City Councilman in 1889.

He rose steadily in Chicago politics as well, chosen as the chairman of the influential Finance Committee in 1893. “The committee chairmanship afforded him a controlling hand in promulgating rules regulating city contracting, railroad grade crossings, and street paving, all of which impacted the business interests of the Western Stone Company,” Poulson writes. 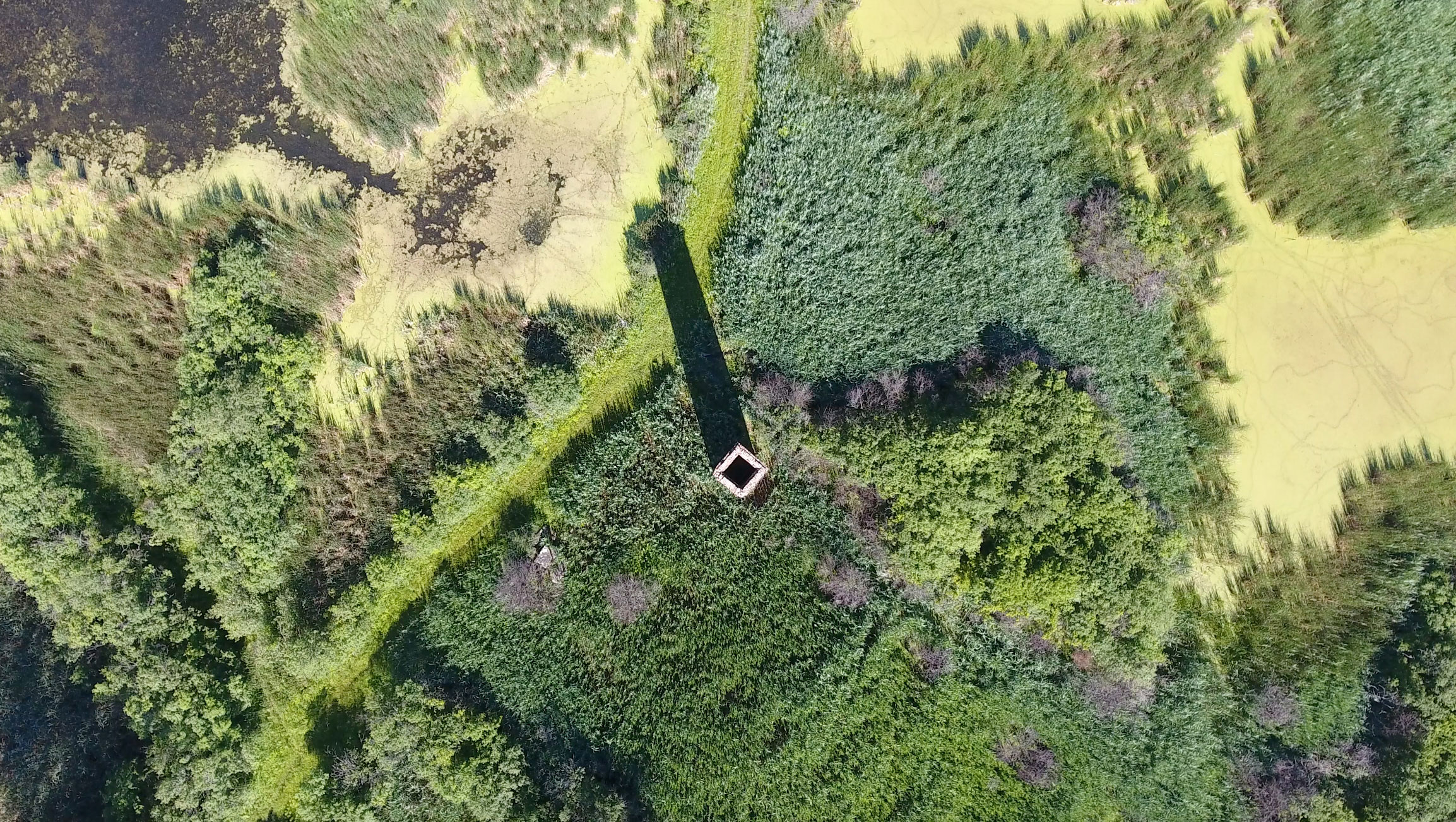 “It was undoubtedly Madden’s political influence, as much as his business experience, that prompted the Western Stone Company directors to seek his entry into their combine,” Poulson surmises. 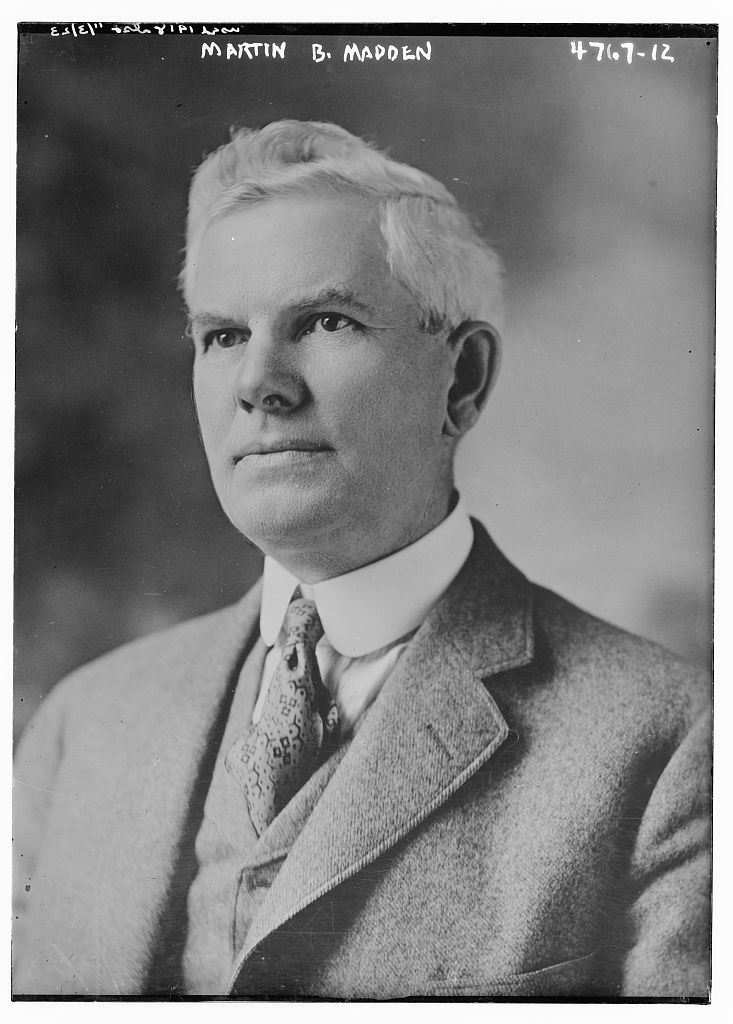 Madden joined the Western Stone Company as vice president and manager and immediately, in 1892, began to mechanize quarrying operations in order to reduce costs.

But, Poulson writes, “his actions were soon overshadowed by the effects of the tremendous depression of 1893.” Western Stone Company stock plummeted from a high of 95 to 50, forcing the Des Plaines River valley quarrying companies to reduce wages from $1.75 per day to $1.50. This incited a “violent strike” that had to be subdued by the militia.

Western Stone stockholders elected Madden as president of the company in 1895. “Madden took the helm of a company employing 2,700 men,” Poulson reports. “Fifty boats and 500 teams of horses serviced its many yards.”

Madden inherited a large debt and immediately set out to cut costs. He spent $108,000 to improve equipment and cut 400 “useless” jobs. He instituted a 7.5 hour workday and added two 15-minute breaks. By the end of 1895, the cost of cutting stone had been reduced from $1.50 to 50 cents for large stones and from 52 to 16 cents for small stones, Paulson writes.

But business continued to languish through the remainder of the 19th century, and the Western Stone Company tried to respond to market conditions “by going extensively into the furnishing of crushed stone” in 1899. This new branch was in full operation by the next year. The company continued struggling in the first decade. By 1910, Western Stone was forced to join with other quarrying firms to form a crushed stone combine, but this was broken by an anti-trust suit the next year.

Meanwhile, in 1905, Madden was elected to the U.S. Congress. Madden devoted more and more time to Washington, and by the time of his formal retirement from Western Stone in 1915, the end of the company was near. The Keepataw site, along with other properties, was sold off in 1918, and in its annual report of 1920, the company stated, according to Poulson, that it “had not actively engaged in operation of its plants for some time.” A Superior court decree formally dissolved the company on February 16, 1925. Throughout the years that followed, the property passed through a number of owners, including Vulcan Materials Company, which reportedly sought to resurrect quarrying operations in the 1960s and 1970s.

Remnants of another sort were discovered during an archeological survey by the Will County Historical Society in 1972. Called the Bluff Site because of its proximity to Bluff Road, this area once contained housing for Western Stone Company employees. Building foundations and artifacts from the period – doll parts, clay marbles, fancy glass, tableware and serving dishes – indicate that these were family dwellings comprising a “job town” from the period 1890-1910.

According to the Historical Society report, these houses were of Swedish construction and were one and one-half story frame structures with a tar paper roof. “The ground floor was a combination living room and kitchen without a partition, and the second, or half-story, was a sleeping loft. The structure would have peaked out at 15 feet in height.”

Since the Forest Preserve District of Will County acquired the 215-acre preserve between 1978 and 1992, Keepataw’s rare ecology has been allowed to flourish.

Robert Farrell, an instructor at Lewis University in 1972, reported that at least five natural springs flow from the sheer bluff. “Ecologically, they are very interesting since they are zones of very high aquatic productivity possessing excellent animal and plant populations in the steams flowing out below the springs. The spring water is free of pollution. These particular springs may represent the only clean surface water in our area.”

The preserve protects a diversity of habitats, including forest, prairie and wetland. Wildlife found at the preserve includes the federally endangered Hine’s emerald dragonfly and other rare species. Keepataw is also home to a variety of plant species, including Robin’s plantain, Ohio horse mint and false penny royal.

Long gone is the industrial quarrying that was the legacy of the Des Plaines River Valley. At Keepataw Preserve, nature has erased nearly all signs of this part of our history. But the smokestack still stands as testament to what was.