From incarceration to recreation

As the City of Joliet and an army of volunteers work to turn the former Joliet Correctional Center into a tourist attraction befitting its “Blues Brothers” and Route 66 heritage, the Forest Preserve District is considering a plan to convert some of the prison property’s open space into a preserve near the shuttered facility.

The preservation plan would include converting two quarries, which were created when workers dug for limestone to build the prison, into recreational ponds. The site, which is located on the east side of the city in the 1100 block of Collins Street, also could include a multiuse trail, an event shelter and a parking lot that would serve the preserve as well as businesses that move into the former women’s prison located adjacent to the open space.

The plan is at its earliest stages, said Ralph Schultz, the Forest Preserve’s chief operating officer. But the idea is exciting because the possible prison preserve could complement other redevelopment proposals that are swirling around the site, and it would provide open space in an urban area that is ripe for a bit of greenery.

“You have to take advantage of an opportunity when it presents itself,” Schultz said. “And if it’s no more than preserving a future opportunity, then that’s what you want to do. In a case like this we have 170 acres, a significant historical site, a site with a story to tell and a site that has an opportunity to serve the community that is underserved with open space and access to nature.” 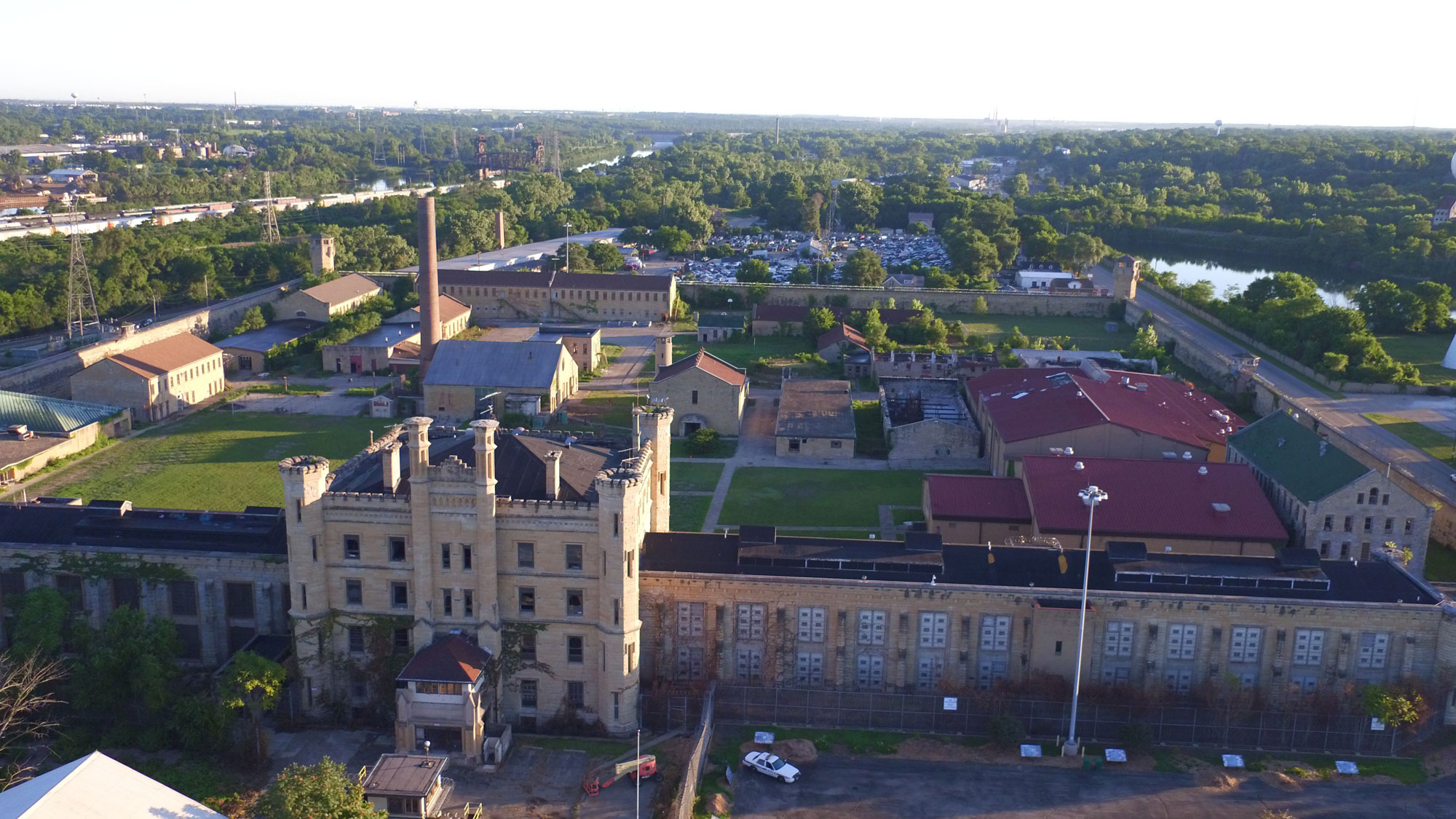 The correctional center, now referred to as the “Old Joliet Prison,” was built in 1858. It housed prisoners and served as an intake center until it closed in 2002. Famous prisoners were housed in the stone structure and numerous films and TV shows were filmed there through the years, adding to the prison complex’s historic luster.

After it was shuttered, the prison sat dormant for 16 years leading to deterioration and vandalism. But the tide turned when late last year the state granted the city a five-year lease to reopen the site for tourism and commercial ventures. Because of the age of the facility and its massive size, it has taken hundreds of volunteers to help clean up the interior of the buildings and prison campus.

In addition to the clean-up activity, the Joliet Area Historical Museum is planning prison tours and has scheduled a “Great Joliet Prison Break-In” fundraiser for August 25. And renovation work is expected to take place at the women’s prison, which is located on the east side of Collins Street, now that the city has approved a one-year lease with Evil Intentions Haunted House, which plans to host events at the site.

The view inside today: 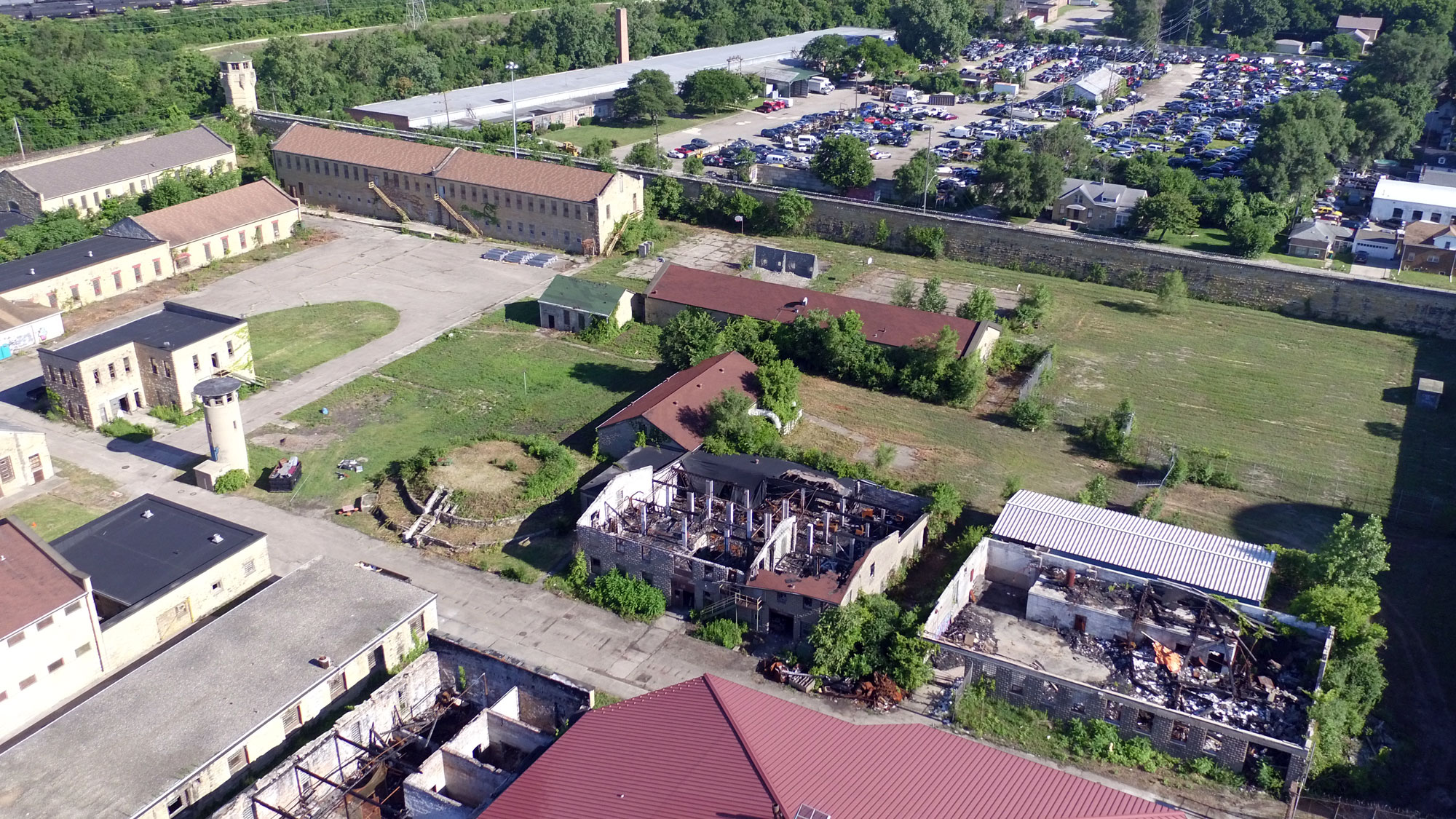 Multiple buildings have been burned by vandals over the years. 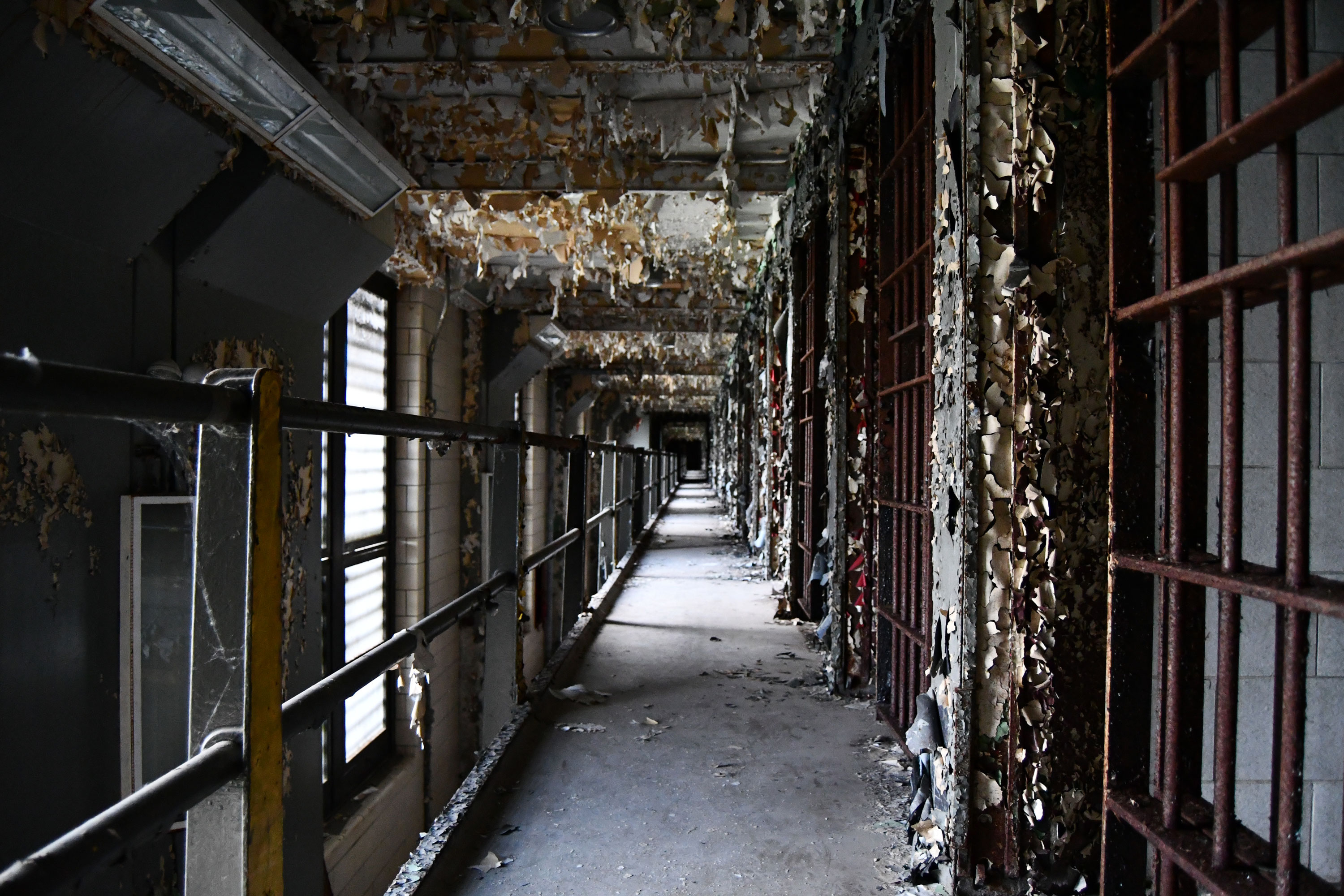 A view down one of the cell blocks. 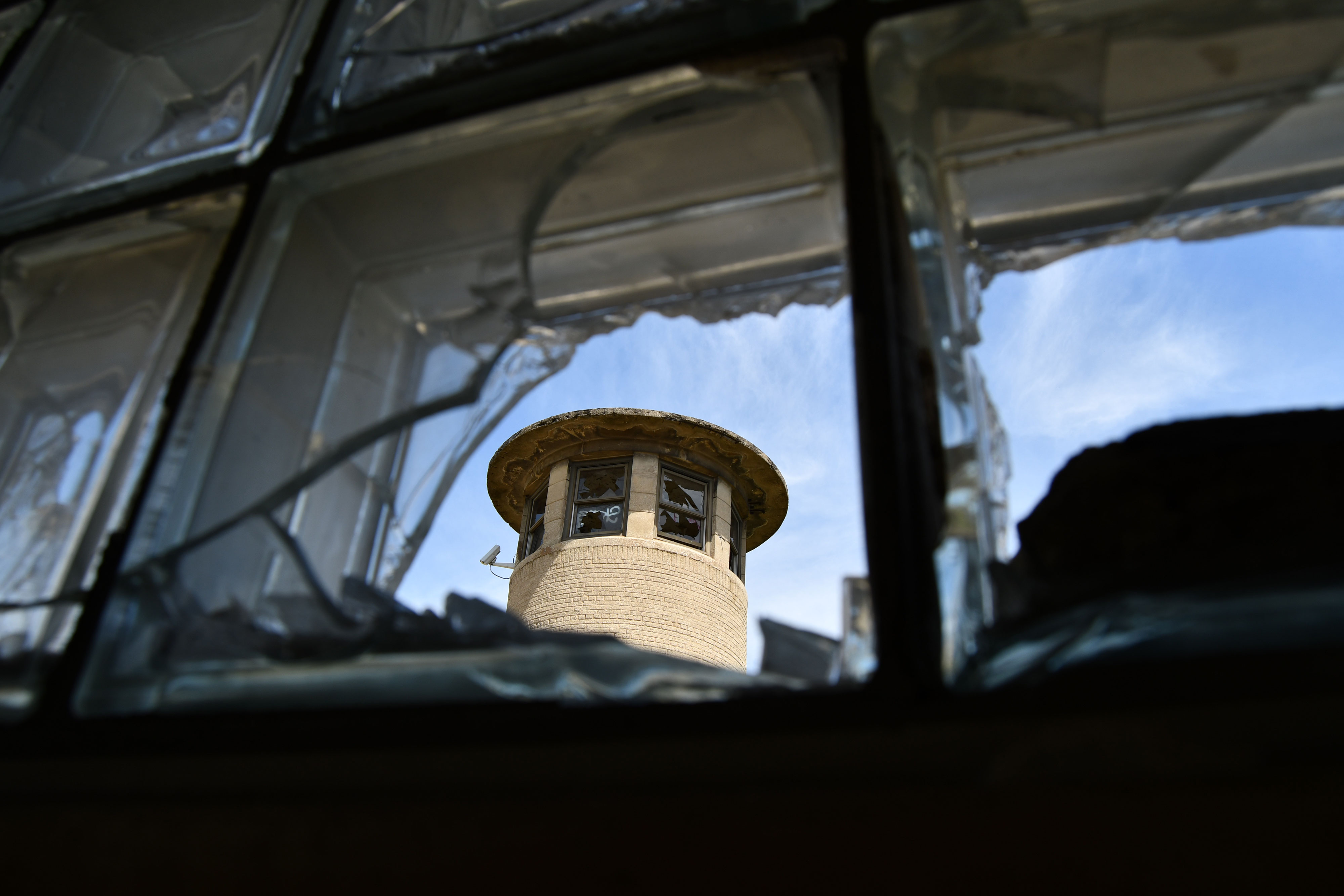 Vandals have had their way with nearly every window in the complex. 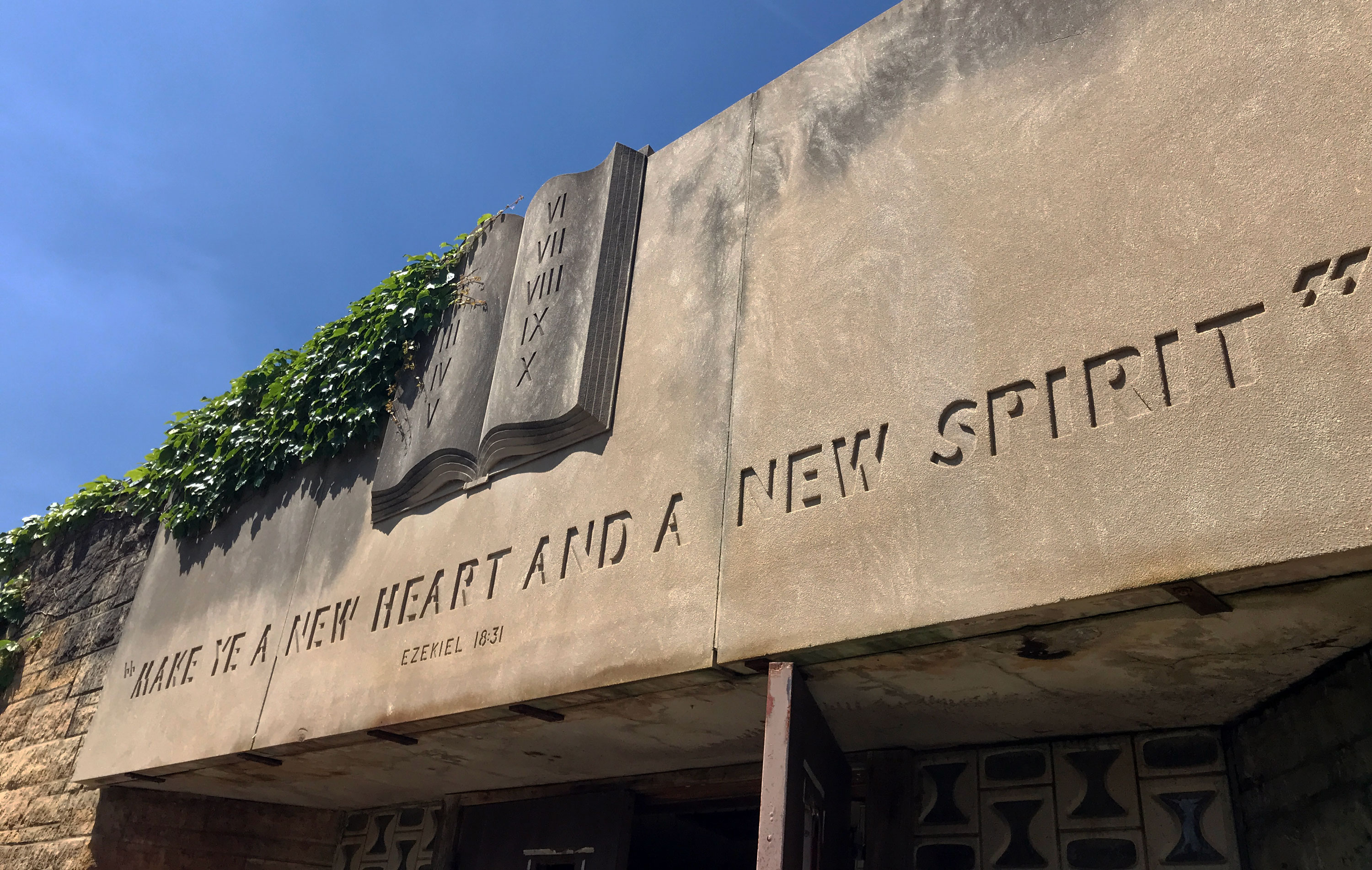 Above the entrance to the church.

Check out this view of one of the exam rooms inside the prison hospital: 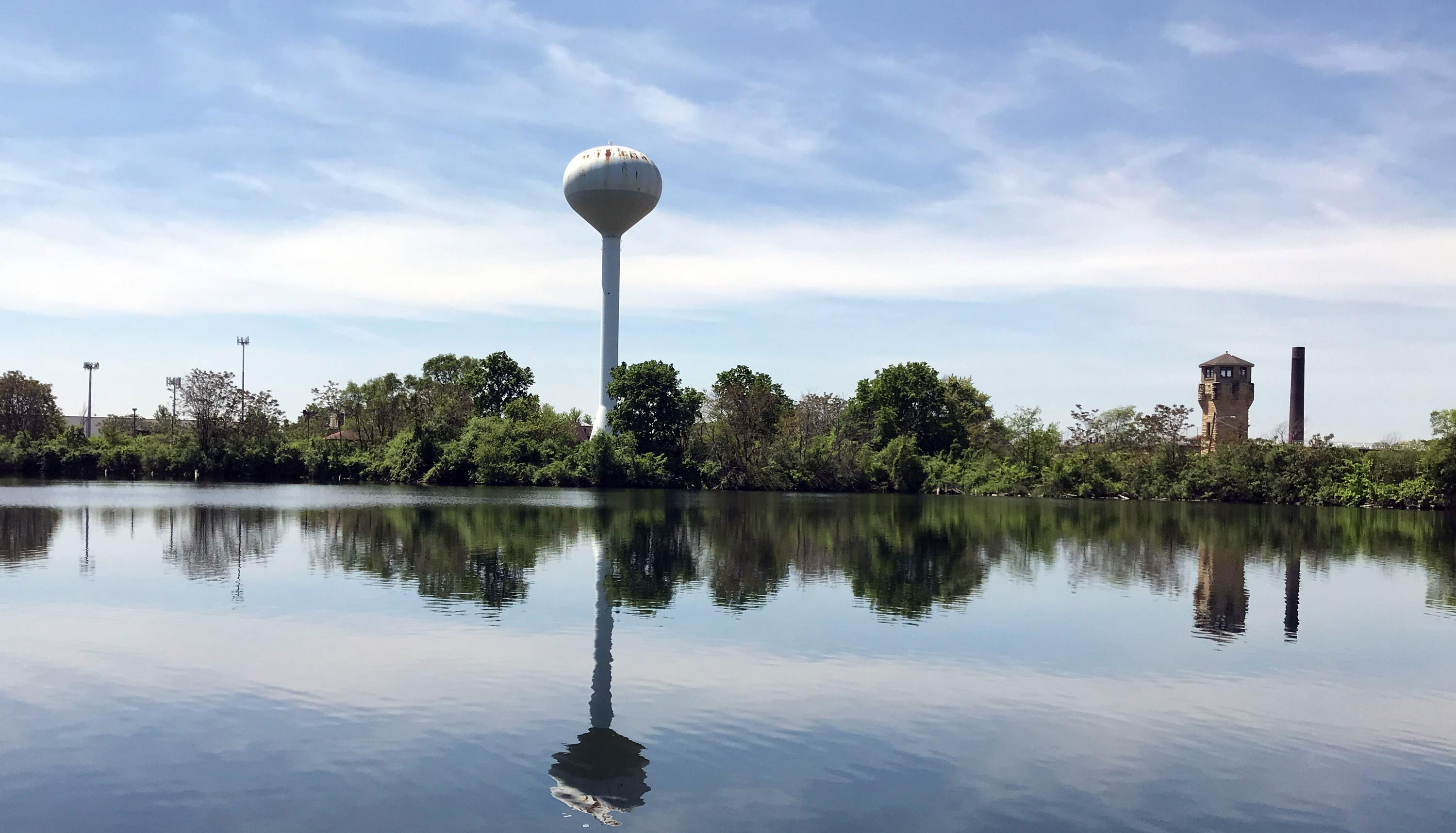 A view from the bank of one of the quarry ponds looking across to the prison site.

The prison property consists of 145 acres on the east side of Collins Street called Prison East, which includes the open space and the women’s prison, and another 25 acres on the west side of the street called Prison West, which is where the Old Joliet Prison is located. The Forest Preserve District is considering working with an estimated 135 acres at Prison East that include 9- and 5-acre quarry ponds and the open space.

Schultz said prison redevelopment partners agree that the 170 acres shouldn’t be left to turn into an eyesore and, instead, should be salvaged as a community asset consisting of a mix of tourism, commercial and recreational opportunities.

But a lot of details have to be worked out with the agencies that are involved in the prison project because it is a collaborative effort with both private and public partners, Schultz explained.

“We recognized early on that the site has its challenges,” he said. “And all of the partnering entities are going to come at it with a different purpose, a different mission and a different goal.” 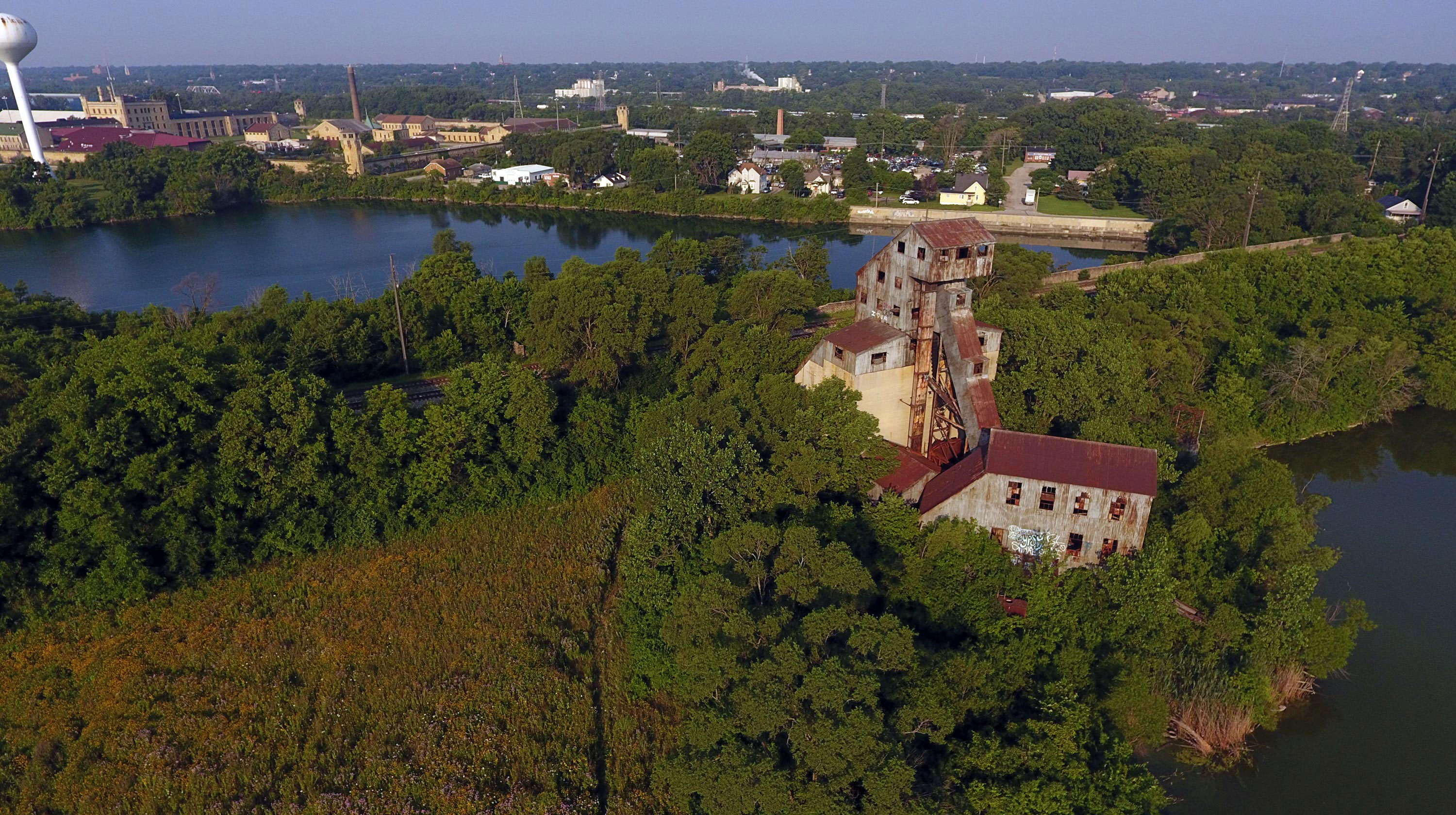 Two former quarry ponds exist on the site, as well as an old rock crusher.

For instance, Schultz said he is talking with city officials about where overflow parking would be located for events that take place at the prison and the businesses that locate in the women’s prison building and how that might positively or negatively impact land available for Forest Preserve development.

Another issue involves access to the land that is to the east of the quarry ponds, on the other side of the Canadian National railroad tracks. These tracks split the parcel into two sections of 110 acres to the northeast and 38 acres to the southwest. It’s possible a tunnel could be bored under the tracks for hikers and bikers, but that is something that would have to be worked out with the railroad, Schultz explained.

One other factor that must be considered is possible environmental contamination left behind from a former firing range. In 2014-2015, the District worked with the Illinois Environmental Protection Agency and Carlson Environmental, which provided pro bono services to craft a report about the extent of soil contamination. Schultz said the Forest Preserve could apply for Brownfield grants from the federal government to remediate the contamination or take other steps during construction to mitigate the soil issues.

A pocket of open space 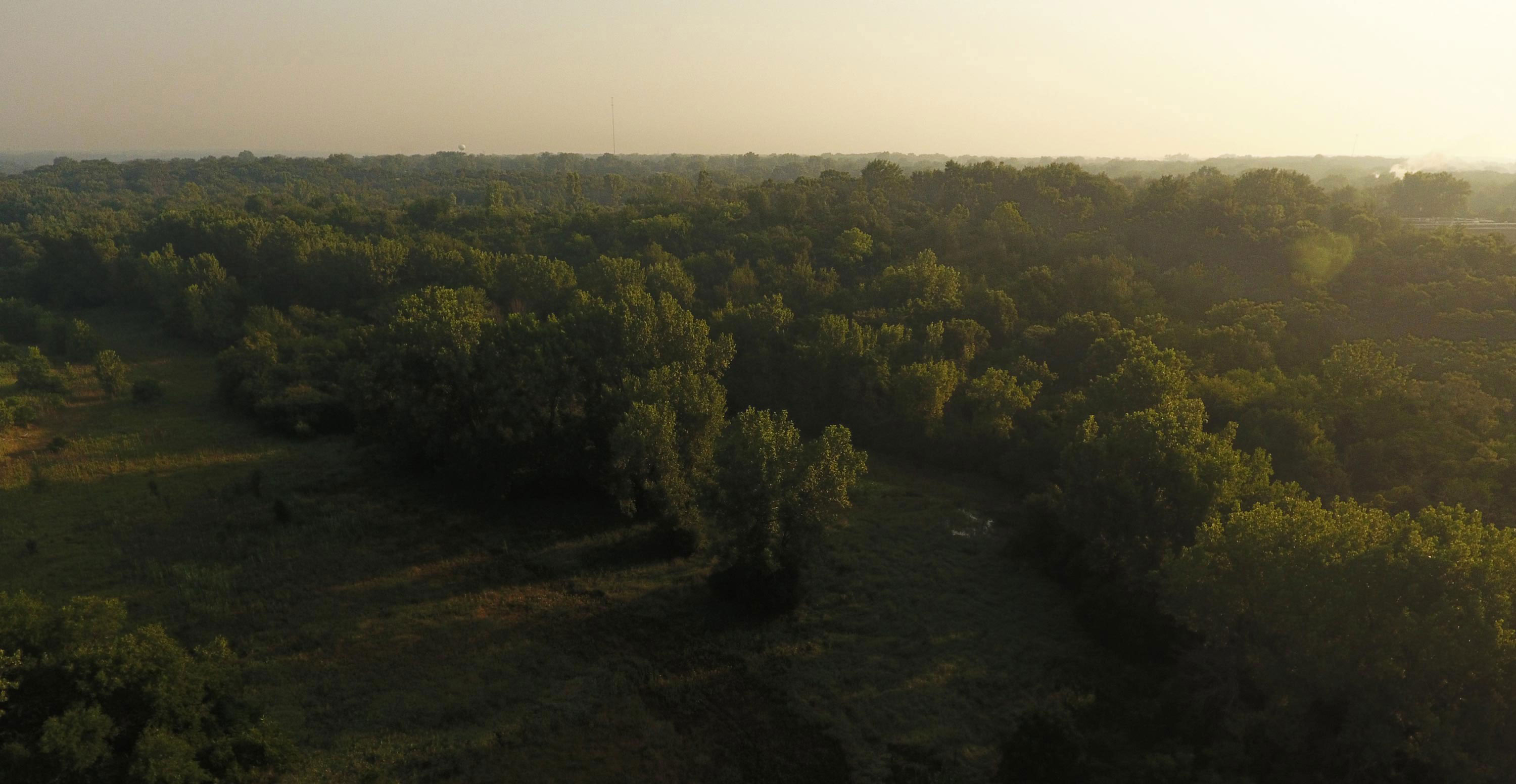 Even with those issues, the District is looking forward to exploring the site’s potential to see what could be done to convert a pocket of open space once dedicated to incarceration into a place for recreation.

While the Forest Preserve is considering participating in the open space component of the prison site plan, nothing would happen until the city acquires ownership of the site and lines up partners to tackle the various elements of redevelopment, Schultz said.

For those who might ask why the Forest Preserve would consider creating a preserve in the shadow of a prison, Schultz said it’s the same reason the District preserved iron manufacturing remnants at Joliet Iron Works Historic Site, farm buildings at Riverview Farmstead Preserve, tombstones nestled in presettlement prairie at Vermont Cemetery Preserve, former railroad paths that were turned into the Wauponsee Glacial Trail and the Old Plank Road Trail, and former quarries at Lake Chaminwood, Rock Run Rookery and Whalon Lake preserves.

“Those are all sites that have been manipulated by us, humans, that we are doing our best to transition and make usable for recreation while preserving the natural flora and fauna,” he said. “It’s about conservation of not only natural resources, but also natural heritage, which involves man’s interaction with nature, as well as nature itself.”