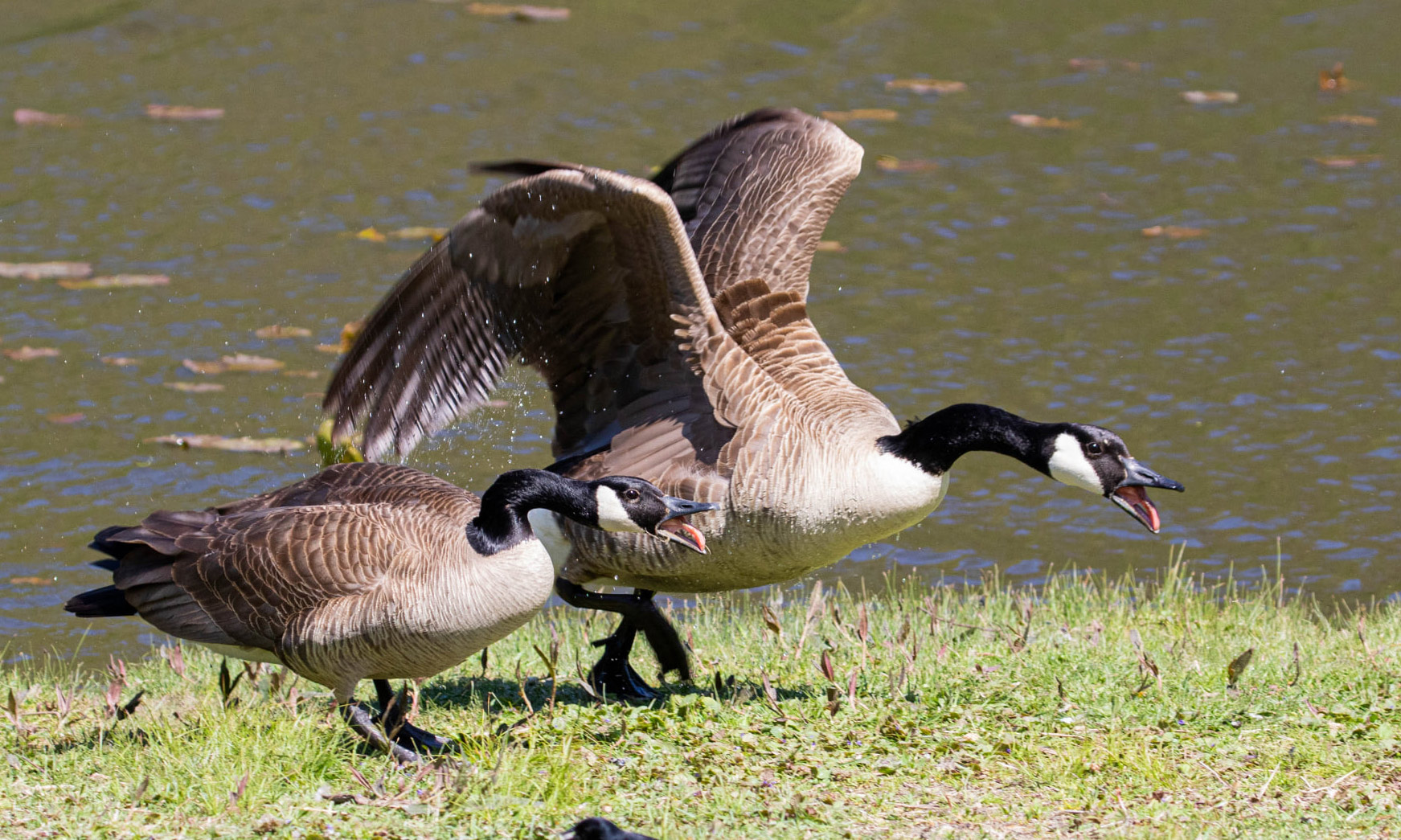 Canada geese are one of the most well-known and widespread birds, but they definitely don't make many favorite lists.

All year long you can find these geese congregating around out waterways — and leaving behind messy evidence of their presence.

Canada geese are a well-known migrant, but we see them all year in northern Illinois. What gives? Well, some Canada geese migrate here from points north, but some geese stay put all year because they have everything they need right here.

Read on to learn more about these noisy neighbors.

They mate for life

We don't think of monogamy as typical in the animal kingdom, but Canada geese are among several species, predominantly birds, that mate for life. At the age of 2 or 3, Canada geese begin to seek a mate through the process of assortative mating, which means they look for a bird that is about the same size as them, according to the Iowa Department of Natural Resources.

Geese can live between 10 years and 25 years, so it's not uncommon for a pair to be together for a decade or longer. If a goose's partner dies, the surviving goose will find a new mate, according to the Iowa natural resources department.

A mated pair of Canada geese will raise one brood each year. The female will lay between two and 10 eggs, which the female incubates while the male keeps a watchful eye on the nest, according to Animal Diversity Web. The goslings will stay with their parents until the spring after they hatch, when they will join a group of other juvenile geese until they are ready to select a mate.

They are efficient flyers

Geese are easily noticeable flying overhead, both because of their honking call and their recognizable V formation. That identifiable formation is actually a rather successful energy-saving strategy. Birds flying in the formation expend far less energy flying than they would flying alone, according to the Peggy Notebaert Nature Museum. In fact, studies have shown that geese flying in their recognizable V formation expend only half as much energy as they would flying alone or in another configuration.

The energy savings is the same phenomenon achieved when jets fly in formation, which uses less fuel than flying singly. When in formation, a bird — or jet — benefits from lift by flying in the updraft created by the birds in front of it.

The bird at the front of the V does not benefit from the energy savings like the other birds do, so the front bird will switch places and allow another bird to take the lead when it gets tired, according to the museum. Canada geese aren't the only birds that fly in V formation. It's common among waterfowl, including many species of ducks, geese, ibises, pelicans and swans.

For a time each year, they can't fly

Flight is an important mechanism for escaping predators for Canada geese and countless other birds, but for a period each summer Canada geese are rendered flightless. Geese and other waterfowl can't fly when they molt their feathers, because unlike other birds, they molt their feathers all at once. Without feathers, they cannot fly, according to the Indiana Department of Natural Resources.

Canada geese typically molt in late June or early July, and they will remain grounded for about a month until their new feathers grow in, Indiana DNR reports. Because they are more vulnerable during their molt, they will move to an area of open water near a reliable food source. This provides them walking access to food and easy access to water, where they can go to escape predators. The open water also provides them a way to monitor their surroundings for predators and other dangers.

Have you heard the old wives' tale that ducks and geese will think the first thing they see after they hatch is their mother? This might seem far-fetched, but it's essentially true.

After hatching, geese and some other birds, including ducks and turkeys, will imprint on their parent, according to the Wildlife Center of Virginia. Imprinting is an important part of their early development because it helps them learn about how they should behave. Essentially, they learn how to be a goose from imprinting on their parents after hatching.

Imprinting happens very soon after birth, so if goslings are not in the care of their parents, they may imprint on their wrong species. Once imprinting occurs, the animal will identify with that species for life, the wildlife center reports. In some cases, newly hatched goslings and other birds will imprint on humans if they are not in the presence of their parents. This process is irreversible and will cause the goslings to identify with humans, rather than with geese, forever. While this may seem like a cute accident, it does not mean the goslings will be friendly or agreeable to human presence. In some cases, their familiarity with humans — or whatever species they imprinted on — may cause them to be aggressive toward them or they may be territorial as they normally would with other geese.

They can be mean, but only when they have to be

Geese have a well-known mean streak, with a reputation for going after anything — or anyone — that gets too close. Really, though, geese aren't necessarily any more aggressive than other birds. Instead, we have more encounters with them because in many areas we live alongside them, USA Today reports.

Their aggressive behavior is for good reason. They are protecting their territory and their family. During nesting season, males in particular can be aggressive as they protect their mate and their eggs. Once the eggs hatch, both males and females will be protective of their goslings, according to the Indiana Department of Natural Resources.

You can avoid an encounter with an aggressive goose by giving them their space. Geese will exhibit defensive behaviors such as honking, hissing, wing flapping and head pumping when they feel threatened, the Indiana DNR reports. If you see these behaviors, steer clear. Walk slowly and give the geese a wide berth.