Nature’s soundtrack changes with the seasons, but birds can be heard at least to some extent all year long. The cacophony of birds is greatest in spring, as they sing out looking for potential mates, but if you listen closely you’ll hear birds despite the season.

When you hear them, though, you might not know who exactly you are hearing. While many have distinct songs and calls, birds can be more challenging to identify by sound than by sight.

A good place to start with learning birds by their songs is our most common birds. After all, these are the birds you probably hear more often, maybe even without realizing it.

As you begin to learn to identify birds by their songs, there will be some trial and error. That's why it's a good idea to have an app on your phone that you can use for reference and comparison. Some highly regarded birding apps that include bird songs and calls are the Audubon Bird Guide, iBird Pro Guide to Birds and Merlin Bird ID. The Merlin Bird ID app even has a feature in which you can record a bird's call or song and the app will try to identify it for you.

RELATED: BIRDING BY EAR CAN BE A REWARDING WAY TO GROW KNOWLEDGE

As you start to listen to birds all around you and then look up their calls online or on an app, you may notice that bird songs and calls are often said to sound like the bird is saying something specific as a mechanism for helping people remember. For example, barred owls are said to say "who cooks for you, who cooks for you all?" while many people say black-capped chickadees sound like they are singing "cheeeeeese-bur-ger." What you hear, though, may be different than these commonly used comparisons, so don't be afraid to create your own handy tricks to remember each bird call.

To get you started with learning bird songs, here are some of the most commonly heard melodies in and around our yards and in the preserves. 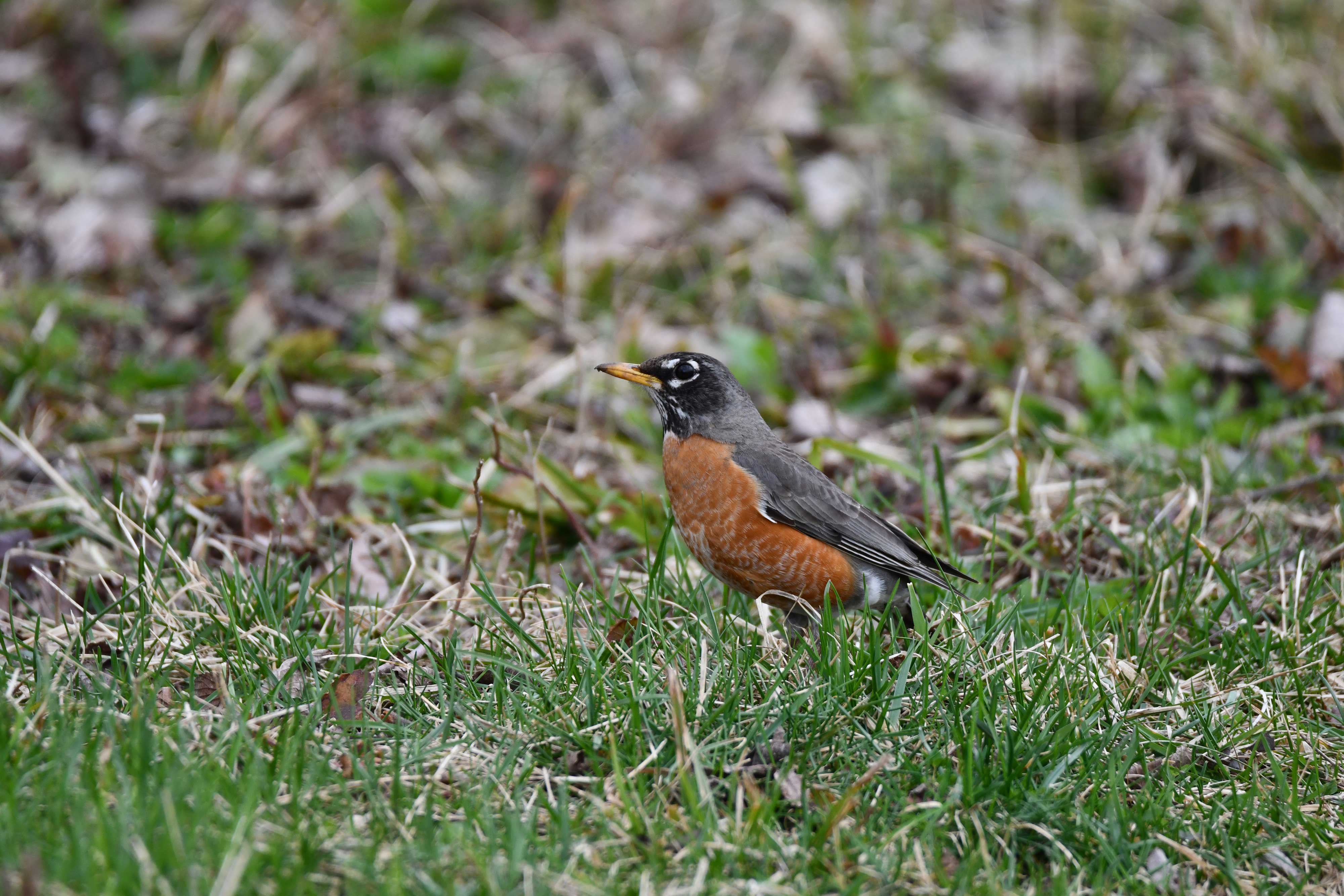 Robins are part of the soundtrack of spring, but you may never have realized that it was the robins whose song you have come to associate with this season. They have a distinct song that sounds like they are saying "cheerio, cheeri-you, cheeri-me," said Bob Bryerton, a program coordinator at the Forest Preserve District's Plum Creek Nature Center. 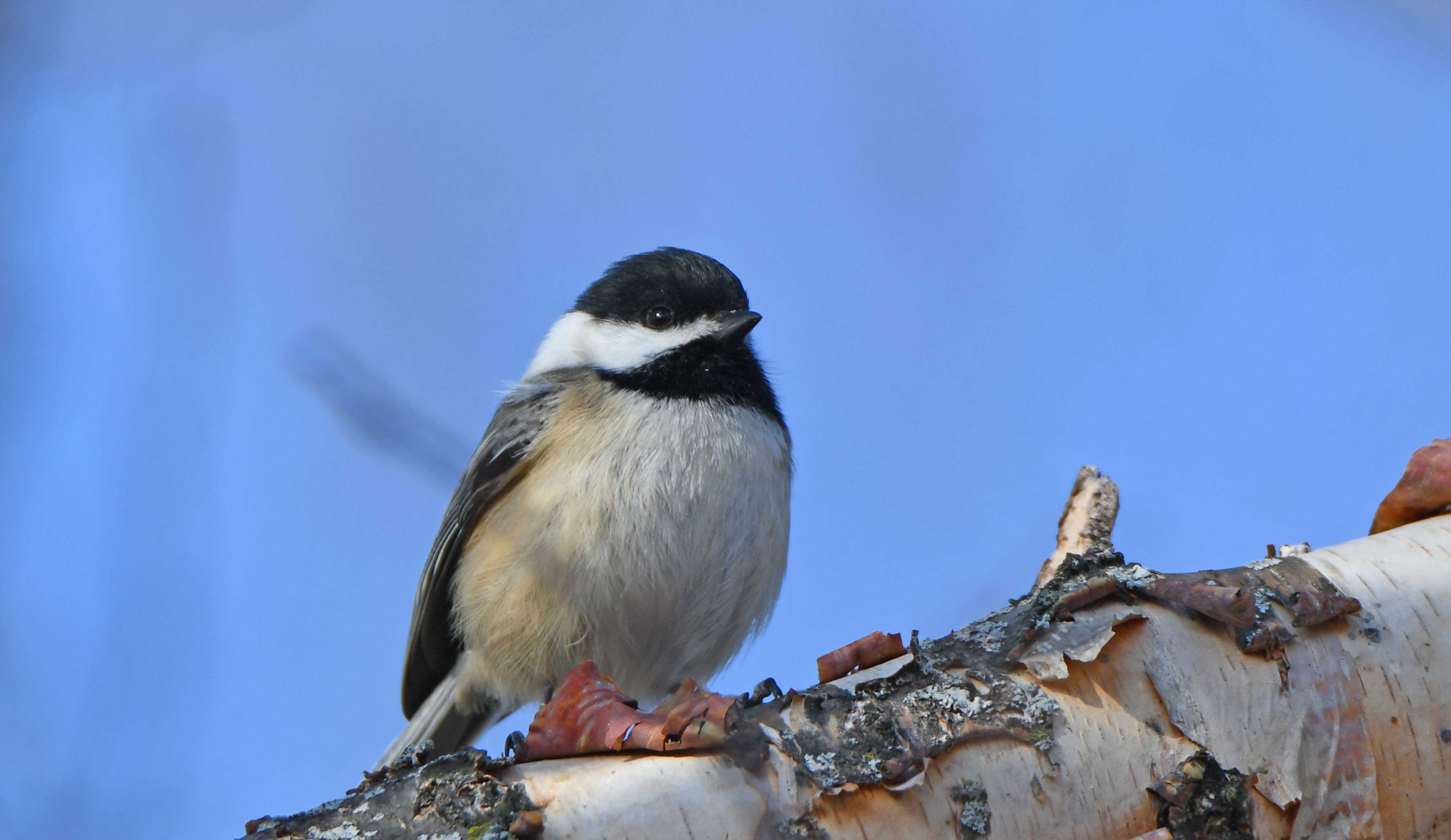 These chickadees have several calls and songs that may be familiar to people. As mentioned above, they have a whistling call that sounds as though they are saying “cheeeeeese-bur-ger," Bryerton said. They also call out their name, “chick-a-dee-dee-dee,” adding more “dee” note at the end if they are alarmed, to help warn other nearby birds.

A chickadee’s song is a very sweet and simple whistle: “fee-bee.” The song is very familiar to that of the eastern phoebe, according to Mass Audubon. Both sing “fee-bee,” but the syllables of the chickadee’s song are more long and drawn out compared to the phoebe. 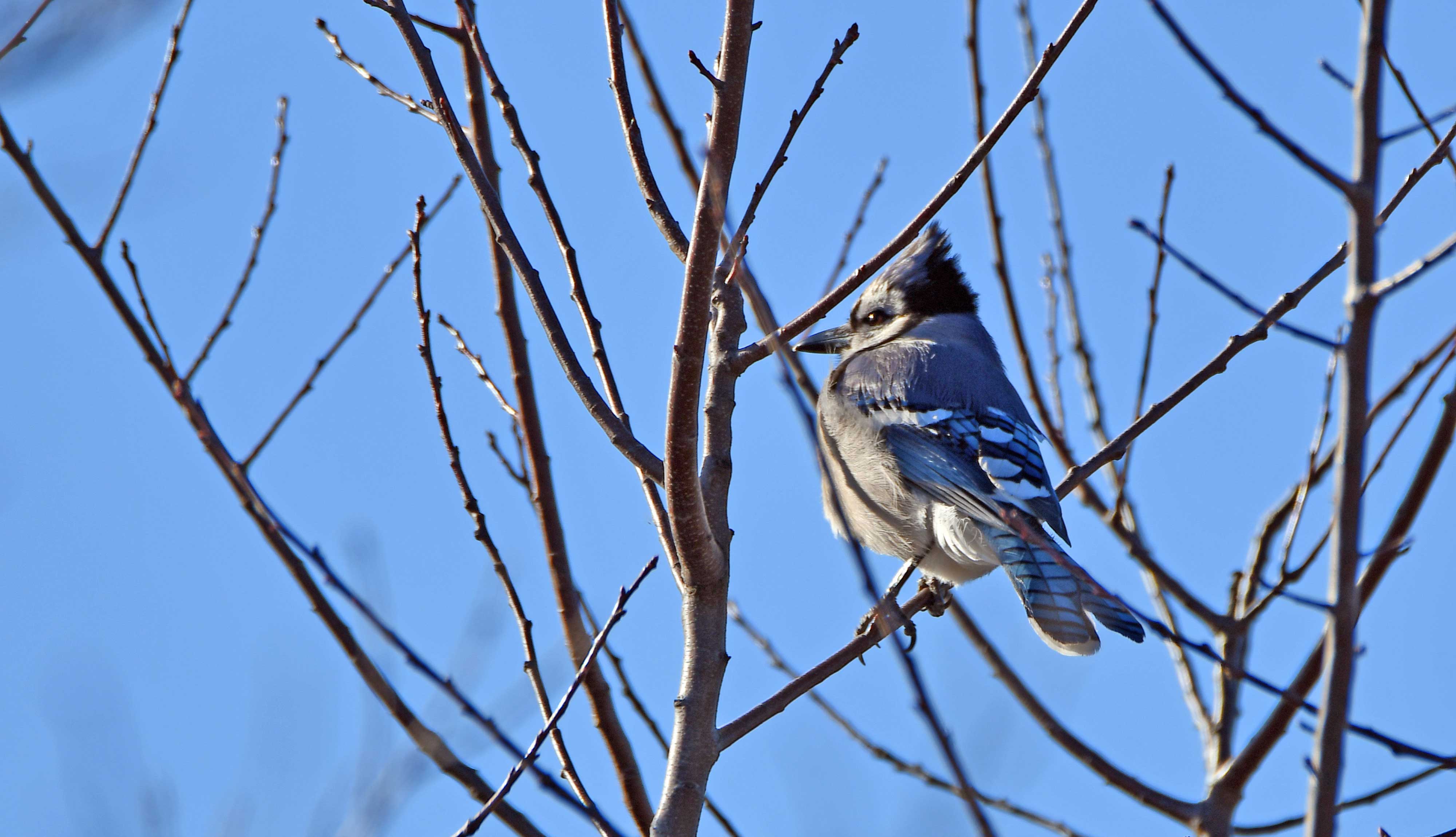 Familiar blue jays are another bird that is said to say its name, screaming out “jay, jay,” Bryerton said, although he added they can also sound like a squeaky gate being opened. Their song, though, is just one of many sounds they make.

One tricky thing about identifying the sounds of a blue jay is that they can mimic other birds, most often red-tailed hawks, Cornell Lab reports. Researchers believe these mimicking calls may be used to communicate with other blue jay or as a decoy to trick other birds into thinking there is a hawk nearby. 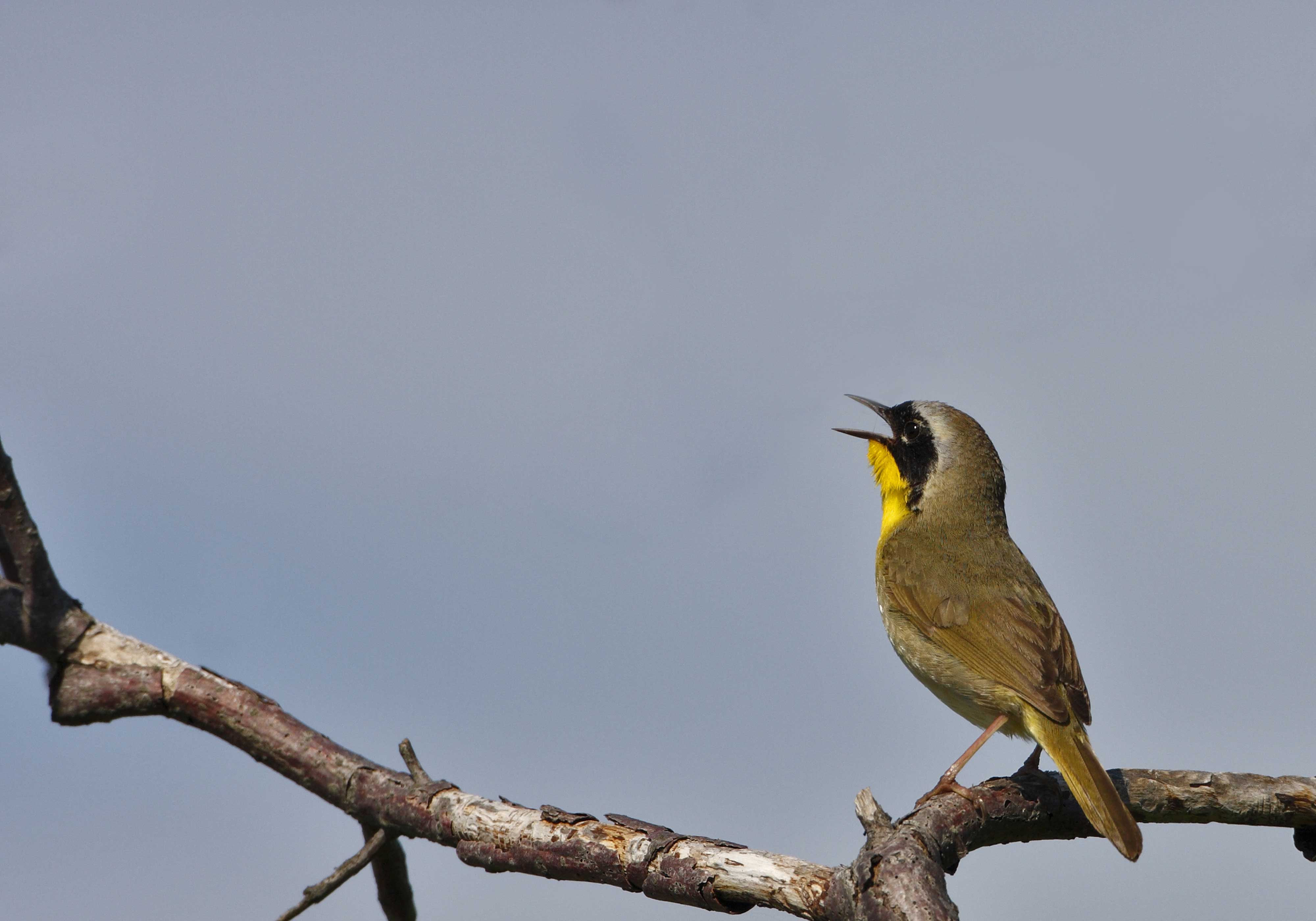 This is a bird that’s more common in the preserves than in our yards, unless you happen to have a yard with thick, brushy shrubs, which is their preferred habitat, Bryerton said. These birds mostly stay hidden in the shrubs, so you are often more likely to hear them calling out “witchity-witchity-witchity” than see them.

Common yellowthroats are frequent singers, with the males averaging about 125 songs an hour and sometimes singing their short song 300 times per hour during the summer, Cornell Lab reports. 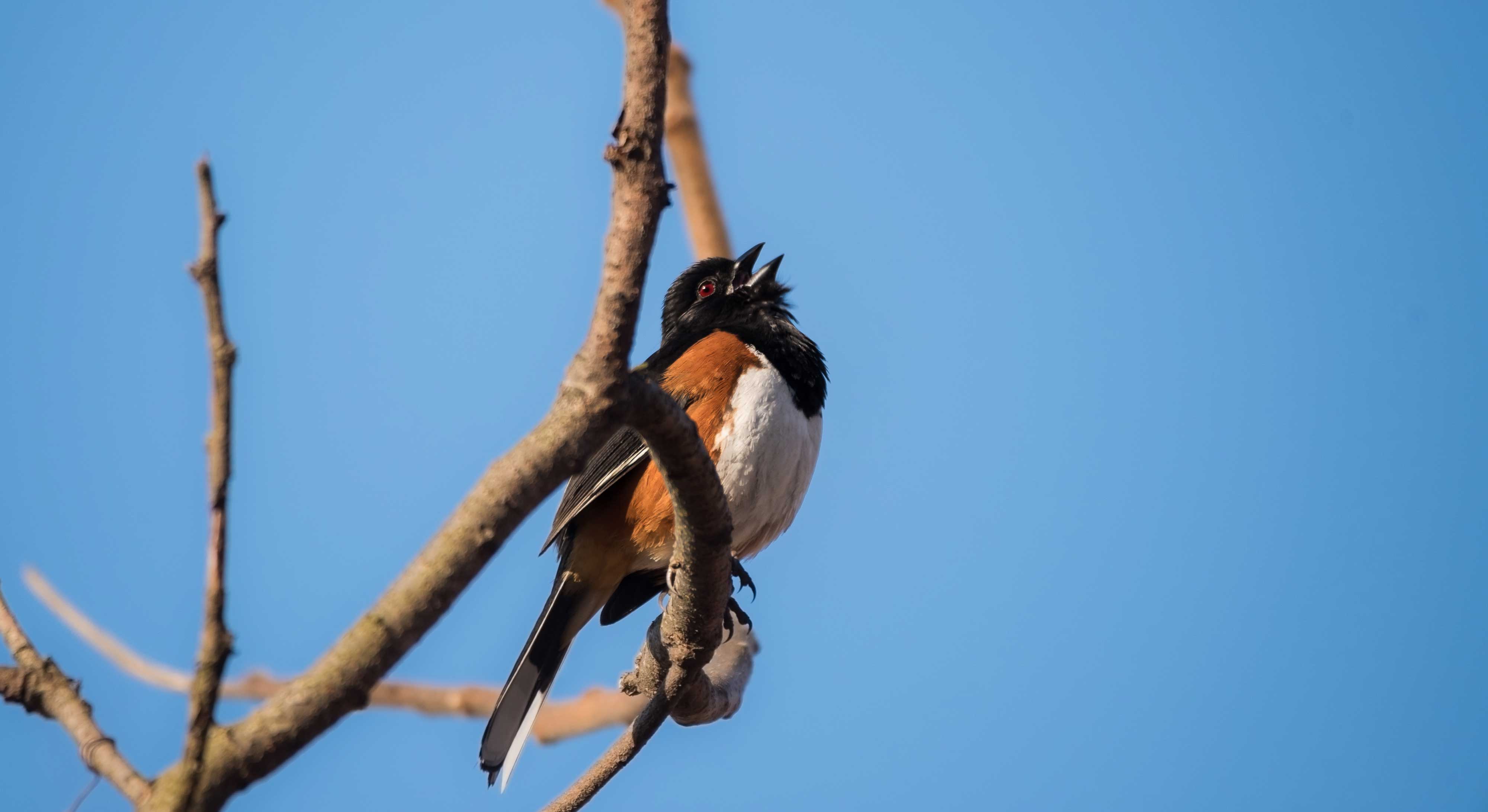 The eastern towhee’s song is easy to recognize because of its distinct melody, as though the males are singing out “drink-your-teeeeea drink-your- teeeeea,” Bryerton said. The first note of the song, the “drink,” sounds metallic, while the last note, the “teeeeeea,” has a distinct trilling quality, according to Cornell Lab.

Towhees aren’t as common in and around our yards as some of these other birds, but they will visit feeders. And if your yard includes dense and shrubby brush and thickets you may have some towhees who have taken up residence. 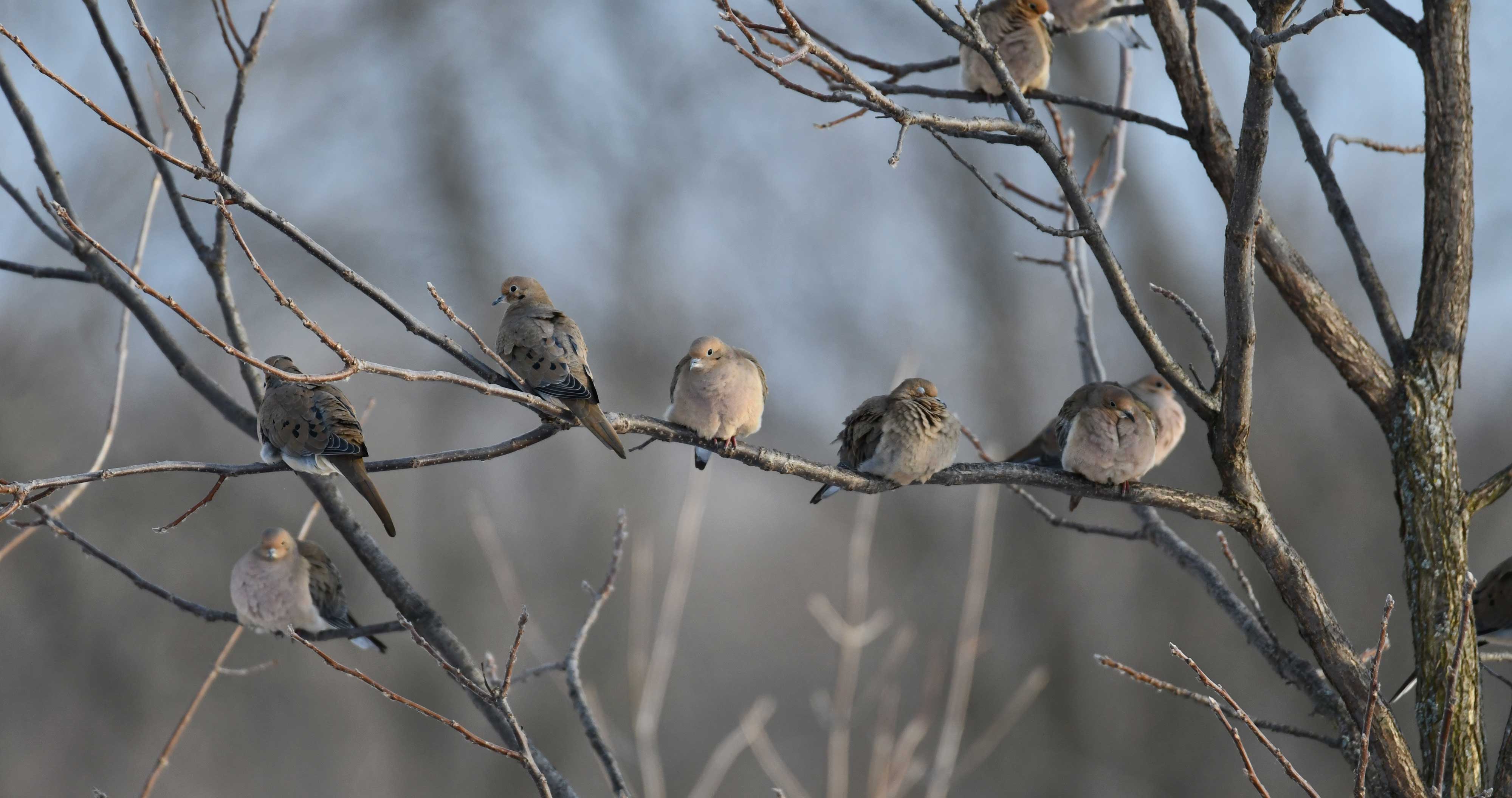 With their low, mournful call, it's no wonder how mourning doves got their name. Their song has a truly somber sound, “coo-OOO-ooo-ooo,” with the second syllable typically with the greatest emphasis, Cornell Lab reports.

The song of the morning dove is often confused with the hooting of an owl, and they do sound somewhat similar. The easiest way to tell if you are hearing a mourning dove or an owl is to consider the time of day. Mourning doves sing during the day, while most owls are nocturnal and hoot at night. 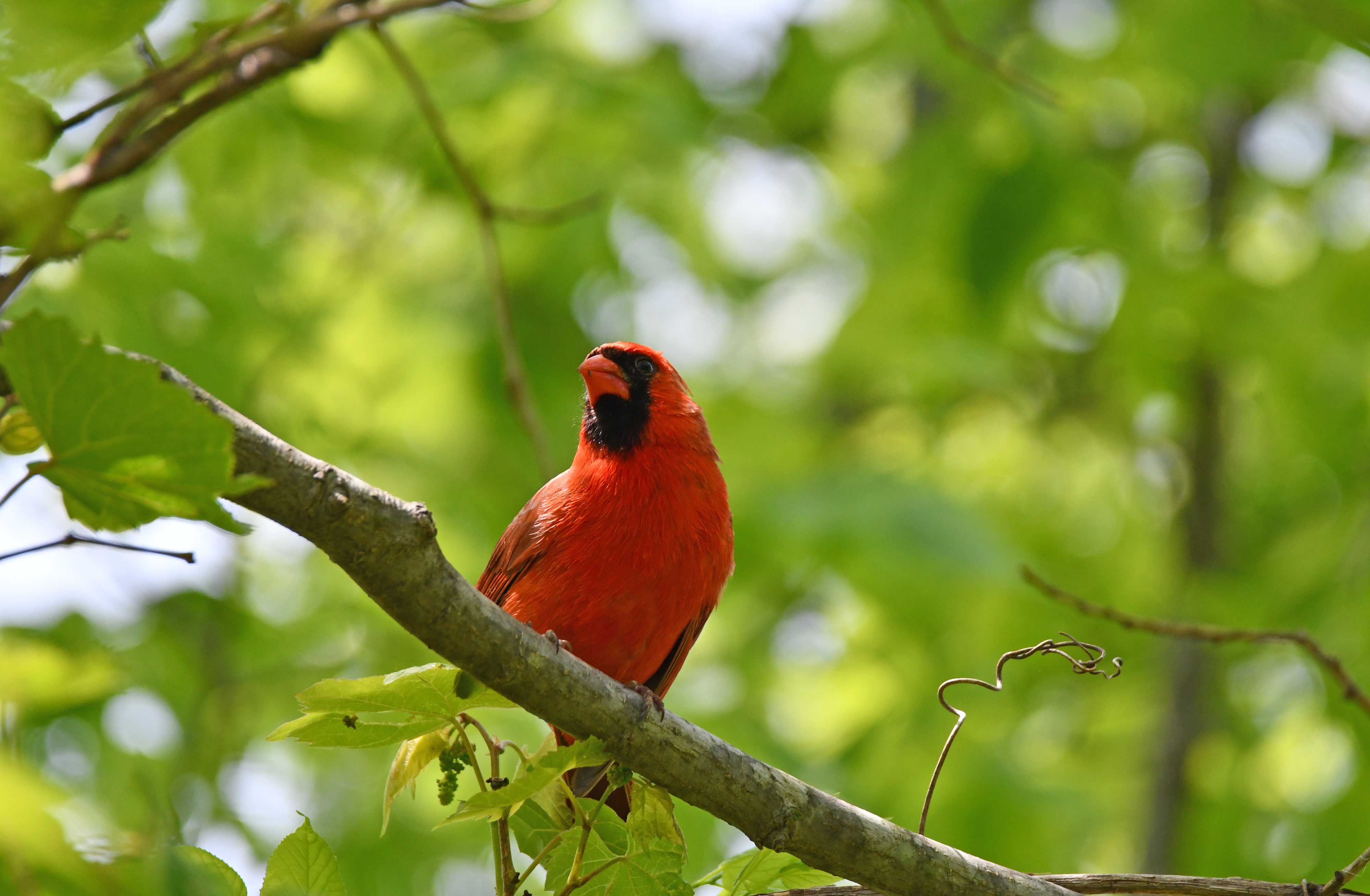 Among songbirds, it’s often only the males that sing. Not so with cardinals, however. Both males and females sing the same song, Cornell Lab reports. While they sing all year long, males sing more frequently in spring and early summer, which coincides with breeding and nesting season for the birds. 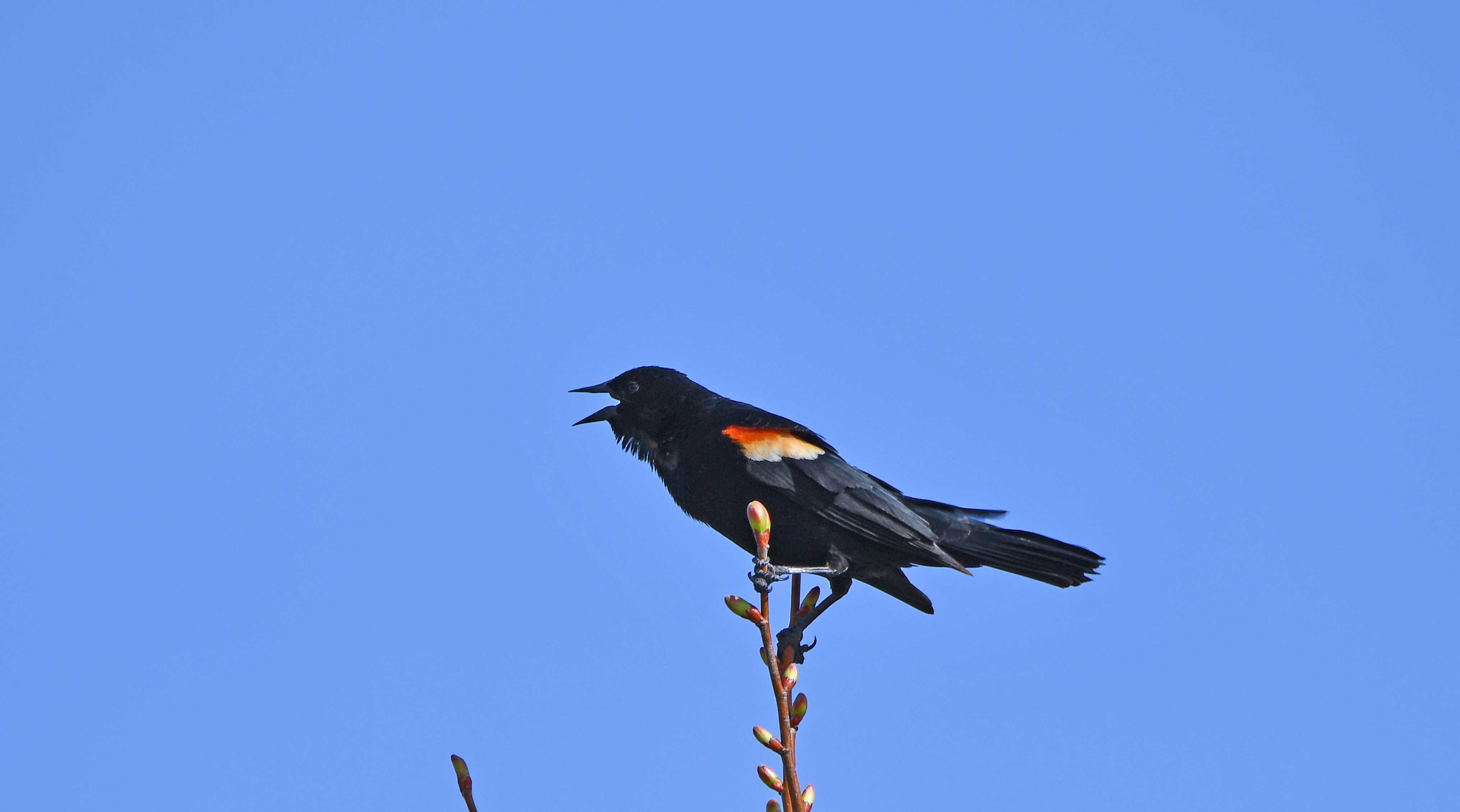 Red-winged blackbirds are another bird we associate with spring because they are one of the first migratory birds to return for the season, with males typically beginning to make music in March. The song of male red-winged blackbirds is familiar to many, with a hearty “conk-la-ree” ringing out across open areas, the Cornell Lab reports.

Males often sing while perched up high, often on vegetation. Females do not sing the same hearty song, but if they are interested in a male they will sing back "chit, chit, chit, chit, chit." Males typically arrive back from their wintering grounds a few weeks ahead of the females so they can establish breeding territories, so it’s common to see and hear the familiar male red-winged blackbirds for a few weeks before females make their presence known. 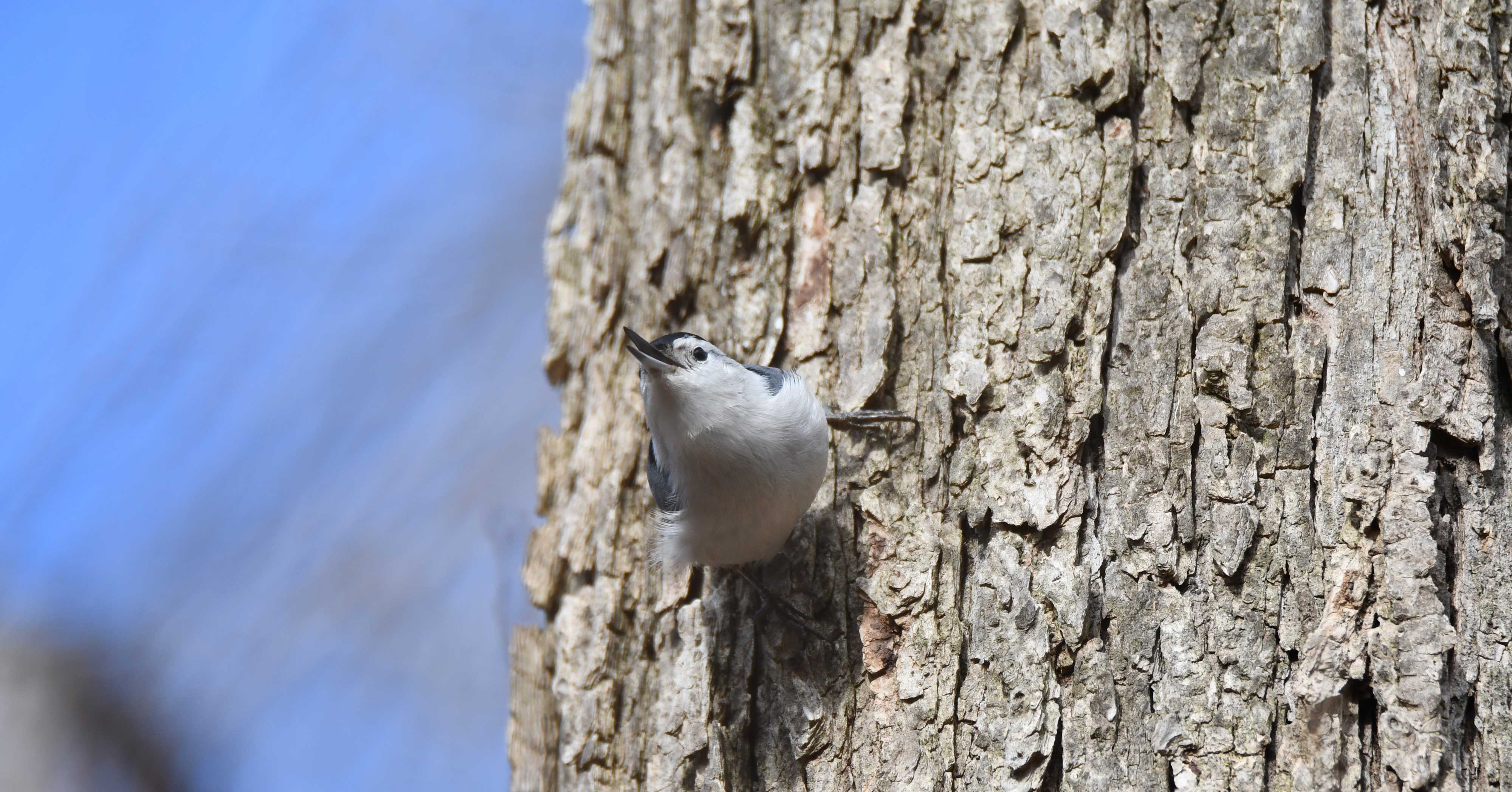 Many common bird songs are heard most in the spring and into summer, but the white-breasted nuthatch gets an early start, beginning to sing in late winter or early spring. Bryerton describes their song as a nasally “yank, yank, yank,” with the song including up to a dozen notes.

The male nuthatches sing their song at two different paces. The faster-paced melody is usually about twice as long as when they sing more slowly, and this is the song that is thought to be used primarily to attract a mate.