The telltale sights — and sounds — that woodpeckers are living nearby 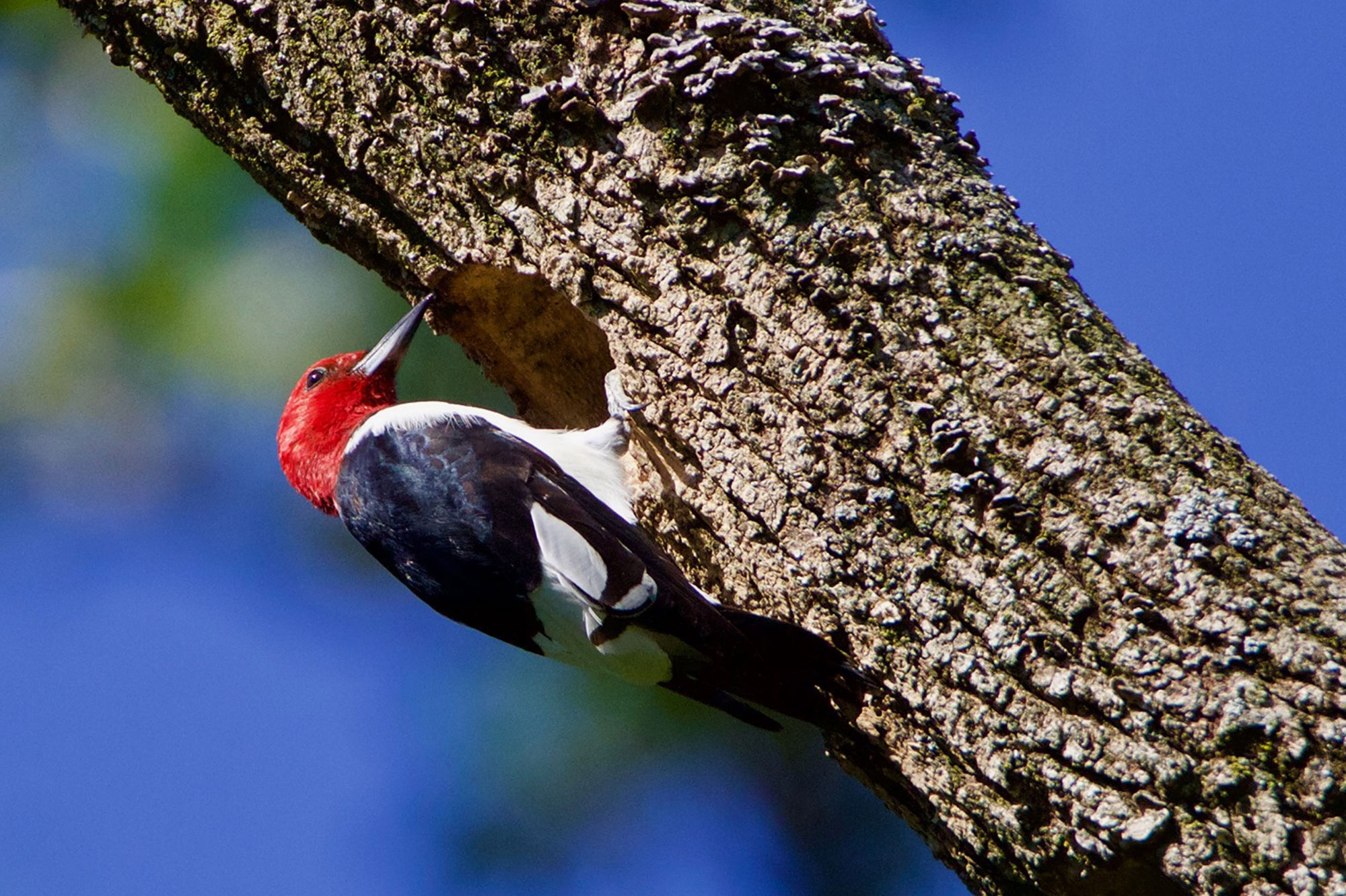 Stumbling across a tree with a distinct hole in it can beg the question of where it came from. Some holes are hollows, which naturally form as the tree grows. Others have clear signs that they were created by wildlife, often insects and birds — particularly woodpeckers.

Woodpeckers are nature's carpenters, drilling on and into trees with their sharp bills. These birds drill for three reasons: to make holes for nesting and roosting; to look for food; and to communicate with other birds, whether to mark their territory or attract a mate, according to the U.S. Fish and Wildlife Service.

At this time of year, when the trees are bare, woodpecker holes are more visible. In early spring, woodpeckers will begin ramping up the noise making all in the name of finding a mate. This quick, rhythmic pecking, called drumming, is often heard in spring, the Fish and Wildlife Service reports. Spring is also breeding season for woodpeckers, so they are often seen making nesting and roosting holes, according to Wildlife Illinois.

That's not to say you won't see a woodpecker this winter. Quite the opposite, in fact. Illinois is home to seven different woodpecker species: the downy, hairy, red-bellied, red-headed and pileated woodpeckers, the northern flicker and the yellow-bellied sapsucker. Most of these are year-round residents of northern Illinois and breed here, although the yellow-bellied sapsucker is only in our area in the spring and fall during its migrations between the southern United States and Mexico.

RELATED READING: WOODPECKERS, THE BIRDS OF ALL SEASONS

At McKinley Woods and Four Rivers Environmental Education Center, the most commonly seen and heard woodpeckers are the downy and the red-bellied woodpeckers, said interpretive naturalist Kelli Parke. The same is true at Plum Creek Nature Center, where these woodpeckers also visit the bird feeders, and elsewhere throughout the preserves. The others are less commonly seen, particularly the pileated woodpecker, but they leave visual proof that they are living in the forest.

For the most part, the bigger the woodpecker, the bigger the hole it makes. The largest woodpecker in Illinois is the pileated, and it is an impressive sight, with its bright red crest on its head. These birds make oval holes for nesting or rectangular holes in search of carpenter ants, their preferred food, according to the Cornell Lab of Ornithology.

Because woodpeckers nest in cavities in trees, their nests aren't as susceptible to storm damage or being attacked by predators. They are, however, vulnerable to trees being cut down. To protect against disrupting a woodpecker nest, it's best to wait until after spring to cut down trees.

The holes woodpeckers make for nesting can be used year after year, but they aren't always used by woodpeckers. Other birds often take over old woodpecker nests, both for nesting and shelter, Parke said.

While the size of a woodpecker hole often correlates to the size of the bird that made it, that isn't necessarily true of the volume of their drumming and drilling. Downy woodpeckers, for example, have a loud drumming sound that belies their small size, because of how it reverberates through the air.

Woodpeckers were built for all this drumming and drilling. Their bills are strong and sharp like a chisel, which allows them to drill into wood, according to the Cornell Lab. They also have strong neck muscles and thick skulls to protect themselves from injury from the repeated drilling motion.

Even a woodpecker's feet are specially designed to enable them to grasp onto trees and other wood structures. While most songbirds have four toes — three forward facing and one that faces backward — woodpeckers have what is called a zygodactyl foot, with two forward-facing toes and one backward facing.