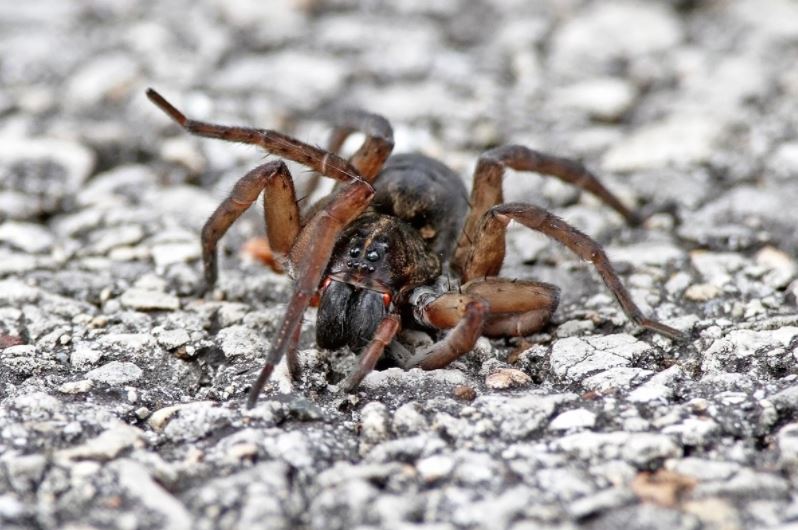 That big, hairy spider you saw is probably a wolf spider. They are among the most common types of spiders in the world, with between 2,000 and 3,000 known species, including at least 47 in Illinois, according to the Illinois Natural History Survey.

If you're afraid of spiders, wolf spiders probably set your heart to racing. With their big, hairy appearance, they are admittedly a little scary looking. They are harmless, though. Wolf spiders are not aggressive toward humans, although they will bite if provoked, according to the Missouri Department of Conservation. However, their bites are not dangerous to humans.

One of the things wolf spiders are most known for is carrying their babies around on their backs. The mothers carry the eggs around in a sac wrapped in silk. Once the eggs mature, she rips open the sack to help the babies emerge, according to the University of Michigan's Animal Diversity Web. Once they hatch, the babies — which can number more than 100 — climb on her back and hitch a ride until they are old enough to survive on their own.

Here's some more information about these spiders.

Wolf spiders belong to the Lycosidae family of spiders, which has given rise to their common name. "Lycos" is the root word for wolf in Greek, the Illinois Natural History Survey reports. They are thought to be named for their hunting technique, which involves stalking and chasing their prey like a wolf.

With thousands of species of wolf spiders, there is some variation in their appearances, although they do share many common features. Wolf spiders can range in color from black to gray to brown, and they usually have stripes that run lengthwise.

Wolf spiders have two body parts: a celphalothorax, which is their head and thorax, and an abdomen. Like all spiders, wolf spiders have eight legs, and like most spiders, they have eight eyes, Animal Diversity Web reports. Wolf spiders have dark-colored eyes arranged in three rows: a row of four eyes and two rows of two eyes. The two eyes in the middle row are much bigger than the other eyes.

Wolf spiders have long legs that help them move quickly across the ground. Adding to their imposing appearance are their fang-like mouthparts, called chelicerae, the natural history survey reports. Their size can vary from about 1/2 inch to 2 inches long.

Female wolf spiders are typically larger than the males, and they usually live longer too. Male wolf spiders live about a year, while females can live for several years.

Wolf spiders are ground dwellers, and they are often found under rocks and logs, at the base of plants and in leaf litter, according to the natural history survey. Their coloring often serves as good camouflage. Some wolf spiders build burrows in the ground, while others take shelter under tree bark and other structures on the ground.

Wolf spiders mostly eat insects that live on the ground as well as small spiders. When they catch an insect, they make it easier to eat by either mashing it up into a ball or injecting it with venom to paralyze it and liquify its internal organs, according to National Geographic.

Like many spiders, wolf spiders have a pivotal role in the ecosystem, serving as both predator and prey. They hunt their habitat for insects and smaller spiders, the natural history survey reports. They also serve as a food supply for many other animals, including rodents and other small mammals, birds, reptiles and amphibians.