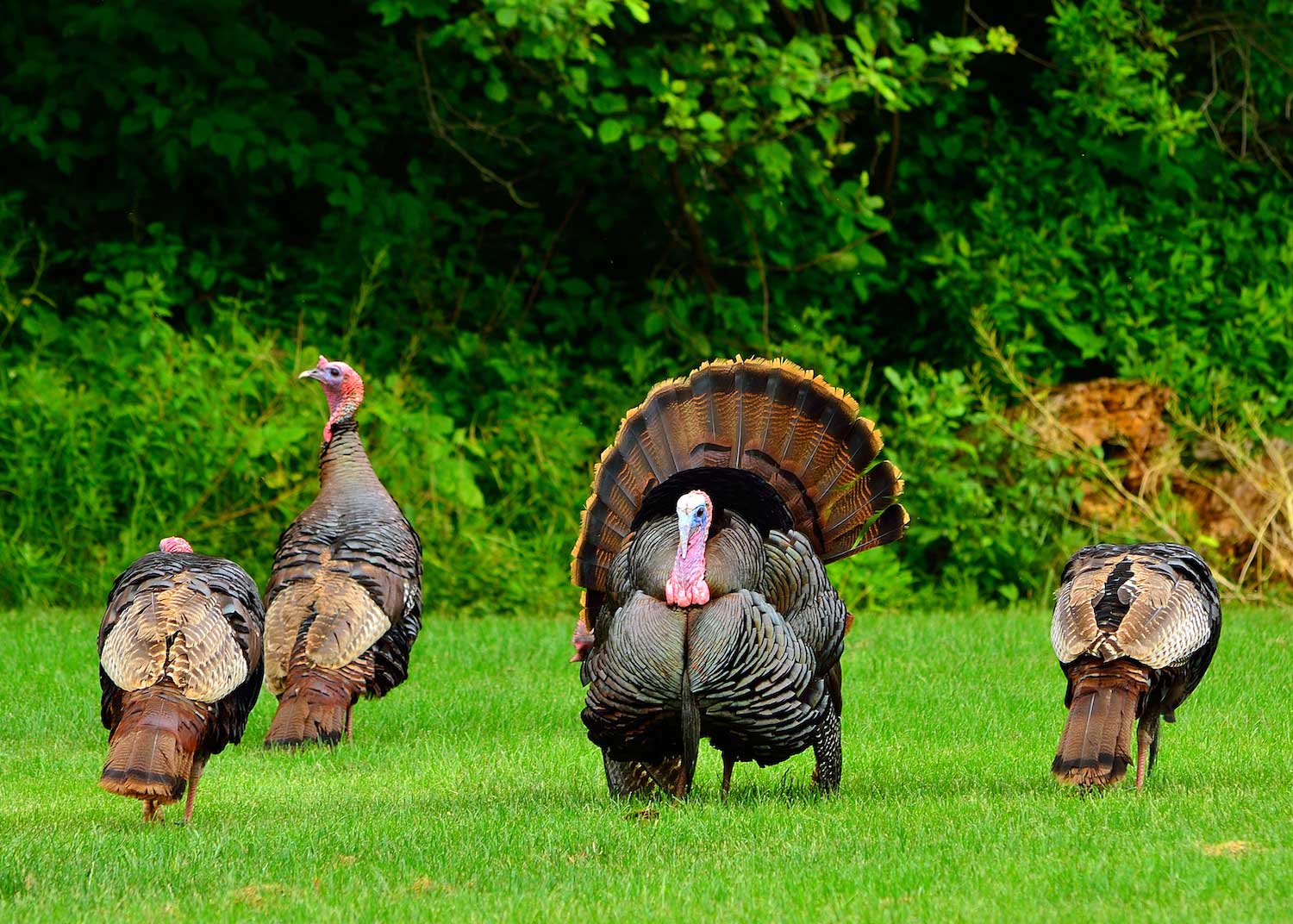 Turkeys aren't just for Thanksgiving feasts. They are also part of our local fauna, with wild turkeys populating woodlands all around us.

Read on for five more interesting facts about wild turkeys. And here's a bonus fact to whet your appetite: Turkey probably wasn't on the menu at the first Thanksgiving, because they weren't commonly eaten at that time. Duck and goose were likely served, and venison certainly was, brought by the Native Wampanoag people who joined Pilgrims for the meal, NPR reports.

They can fly — and pretty well, too

When we think about what makes birds unique, the capability of flight quickly comes to mind. But of course, we can also think of a few birds that can't fly. Penguins and ostriches, to name just a few. These flightless birds are usually large and cumbersome, and the wild turkey certainly fits the bill. However, wild turkeys can fly, and fairly well, all things considered.

Wild turkeys can fly at speeds of up to 40 mph to 50 mph, but only for short distances, National Geographic reports. They usually limit their flight to distances of about 100 yards or less, which is enough to get the bird to safety if under threat of a predator. They also fly up into trees to roost for the night.

Flight isn't their only mode of transit. Wild turkeys can also swim when necessary, and they can run at a clip of as much as 12 mph.

They don't all gobble

The gobbling call of a wild turkey is about as distinctive as any bird song, but only male turkeys gobble. For these toms, gobbling is the equivalent of a rooster crowing, used both to attract a female mate and to respond to other males, according to The Cornell Lab of Ornithology. Gobbling is common from the treetops where turkeys roost, because the sound carries better from the higher elevation.

The gobble may be the most well-known — and quite possibly only — wild turkey sound most people know about, but they actually use many different vocalizations. Both males and females cackle while flying down from their roosts, and they also give off a purring call while walking around. In addition, they may yelp to call their flock back together after it has dispersed. When they're lost, young turkeys will give off a series of whistles to get the attention of nearby turkeys.

We're lucky to have them

Turkeys never seem to be in short supply, especially around Thanksgiving, but the wild turkeys that roam our lands were once nearly extinct. Wild turkeys were abundant centuries ago but were on the brink of extinction by the early 1900s, when an estimated 200,000 remained in the United States, according to the U.S. Fish and Wildlife Service. In Illinois, wild turkeys were eliminated from the state by 1910 because of habitat loss and overhunting, Wildlife Illinois reports.

In Illinois and elsewhere, breeding and reintroduction programs along with conservation measures were used to help grow the wild turkey population. By 1973, their population was estimated at 1.5 million nationwide, National Geographic reports. Today, about 7 million birds live across the country. Because of successful reintroduction efforts, wild turkeys live in every county of Illinois today, Wildlife Illinois reports.

They have a lot of feathers

It probably doesn't come as much of a surprise that, as a general rule, big birds have more feathers than small birds, but when quantifying those feathers the numbers can be impressive. Wild turkeys generally have between 5,000 and 6,000 feathers, according to The Spruce. Compare that to our smallest birds, hummingbirds, which typically have between 1,000 and 1,500 feathers.

Many, but not all, of a wild turkey's feathers are iridescent, contributing to their shiny, colorful appearance. And among male turkeys, their feathers include 18 tail feathers that they can arrange in a fan. The tail feather display is part of the wild turkeys' strut, which they use to impress females as part of the courting ritual, according to the National Wild Turkey Federation.

They could have been our national bird ... maybe

We all know the bald eagle is our national bird, an instantly recognizable symbol of patriotism. But rumor has it American statesman Benjamin Franklin would have much preferred the wild turkey to the bald eagle for this title.

While this may be more of a tall tale, Franklin did, in fact, have a more favorable opinion of the turkey compared to the eagle, writing in a letter to his daughter that the wild turkey is “a much more respectable bird, and withal a true original native of America. ... He is besides, though a little vain & silly, a bird of courage,” according to The Franklin Institute. He was not as glowing in his praise of the bald eagle, instead writing, “Bald eagle ... is a bird of bad moral character. He does not get his living honestly…[he] is too lazy to fish for himself.”

Despite his obvious preference for the wild turkey, there's no evidence that he ever suggested the wild turkey supplant the bald eagle as our national bird and national emblem. In fact, he was a part of the committee, along with Thomas Jefferson, that selected the bald eagle as the national symbol, and at times he used the eagle as an emblem. It is thought that Franklin knew his letter would be published in national newspapers and he used it as an opportunity to caution against creating aristocratic institutions, National Geographic reports.