Seen a bird looking a little worse for the wear? It's probably molting 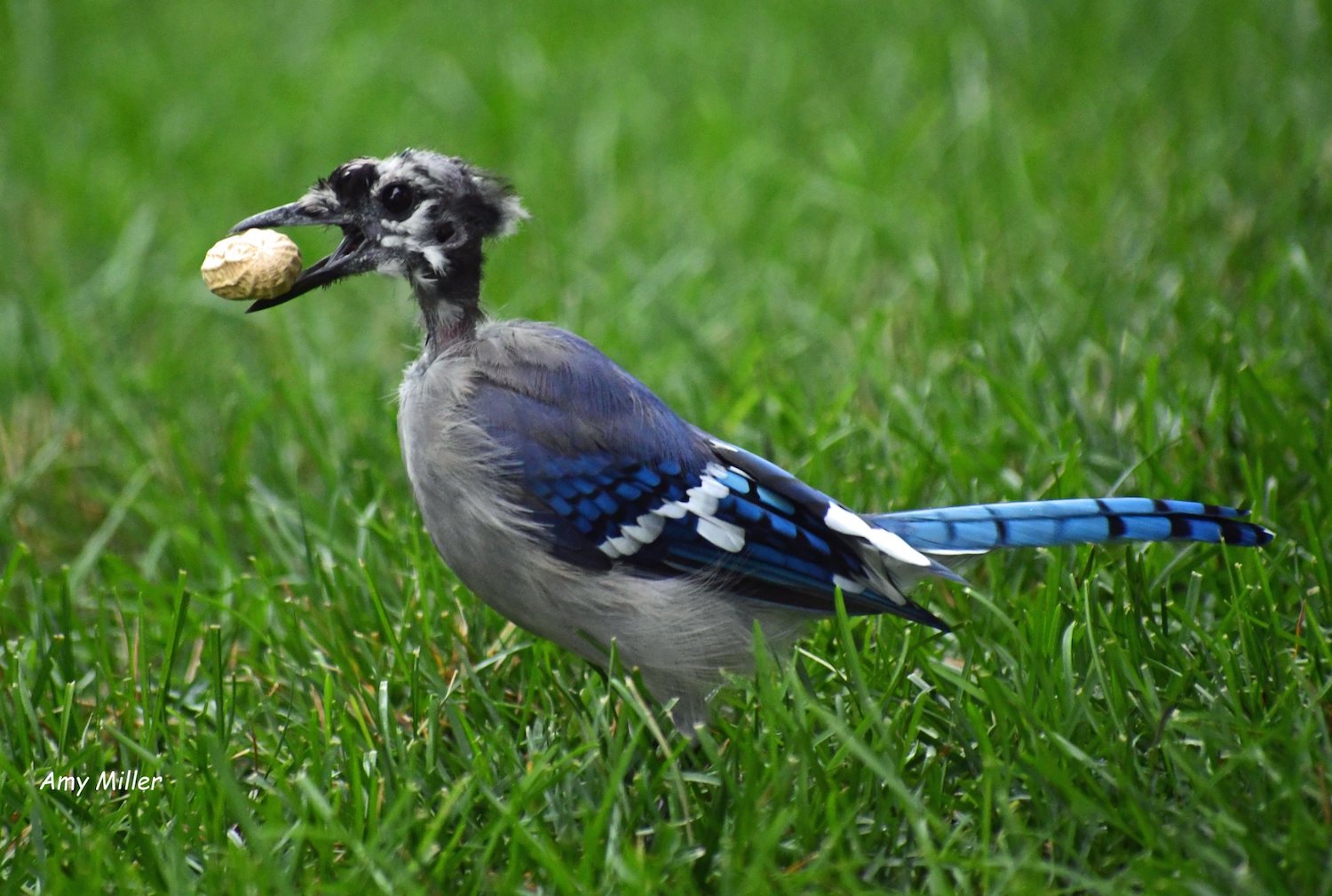 This blue jay is just fine; it's just in the middle of molting. (Photo courtesy of Amy Miller)

If you've seen a bird looking a little worse for the wear or maybe just a little out of sorts for its species, there's a good chance it's molting season for that particular bird.

Feathers are unique — and universal — to birds. All birds have feathers, and no other animals do. But their feathers don't last forever, so they have to be replaced, which is done through the process of molting.

Like our hair and fingernails, feathers are made of keratin. They get damaged from flying, normal wear and tear, parasites and exposure to the sun. Feathers aren't living tissue, though, so they can't heal themselves when they get damaged, according to the Cornell Lab of Ornithology. Instead, birds molt to grow a new set of healthy, undamaged feathers.

Some birds undergo complete molts, when all their feathers are replaced at once, but usually when we see birds molting they are undergoing a partial molt, replacing just some of their feathers, like their flight feathers or body feathers, the Cornell Lab reports. Either way, birds can look a little sickly when they are molting, or at the very least like they're having a bad hair day. But the look is just temporary; they will be back to their usual stylish selves soon.

When it comes to molting, timing is everything. Molting requires a lot of a bird's energy, as do breeding and nesting and migration. Because of this, birds ensure they don't overlap these energy-zapping processes, according to the National Audubon Society. For songbirds in North America, late summer is peak molting season because it's after breeding season and before their fall migration. Even some of our non-migratory birds, like blue jays and cardinals, will be seen mid-molt during this time of year. Some species, like tree swallows, will start their southern migration then stop over midtrip to complete their molt before continuing on their journey.

Because feathers are essential for flight, molting can affect the flying ability of some birds, according to Zoo Atlanta. Take Canada geese and many other geese, ducks and waterfowl. They typically molt their flight feathers all at once, meaning they can't fly for a few weeks until the new feathers grow in. Ducks and geese usually stick close to the water so they can escape predators during this time. Other birds rendered flightless during molting will often stay in wooded or shrubby areas to stay safe from predators.

While most molting is done to replace worn and damaged feathers, some songbirds molt twice a year, a complete molt and a partial molt. Early in the year, in late winter or early spring, they undergo a partial molt to change into their breeding plumages, Cornell Lab reports. This is why male American goldfinches are a drab brown in the winter and an eye-catching golden yellow in spring and summer and male scarlet tanagers are olive green in winter before molting into their scarlet red breeding plumage. In late summer, these birds go through a complete molt, replacing all their feathers with their duller winter plumage.

A few bird species undergo two complete molts each year. These birds, including bobolinks and marsh wrens, tend to experience more damage to their feathers because they move through a lot of dense brush and abrasive vegetation, Cornell Lab reports. Marsh wrens experience two full molts but do no change appearance throughout the year, while male bobolinks will change from the winter plumage to breeding plumage and back with each molt.

For some species, young birds will molt several times, changing appearance with each molt until they reach their adult plumage. A classic example of this is bald eagles. Juvenile eagles are almost entirely dark brown. They molt several times as juveniles, finally achieving their trademark black and white plumage after five years, according to Journey North. Once they reach maturity, they only molt their flight feathers, usually once a year.