Why is this great horned owl white? 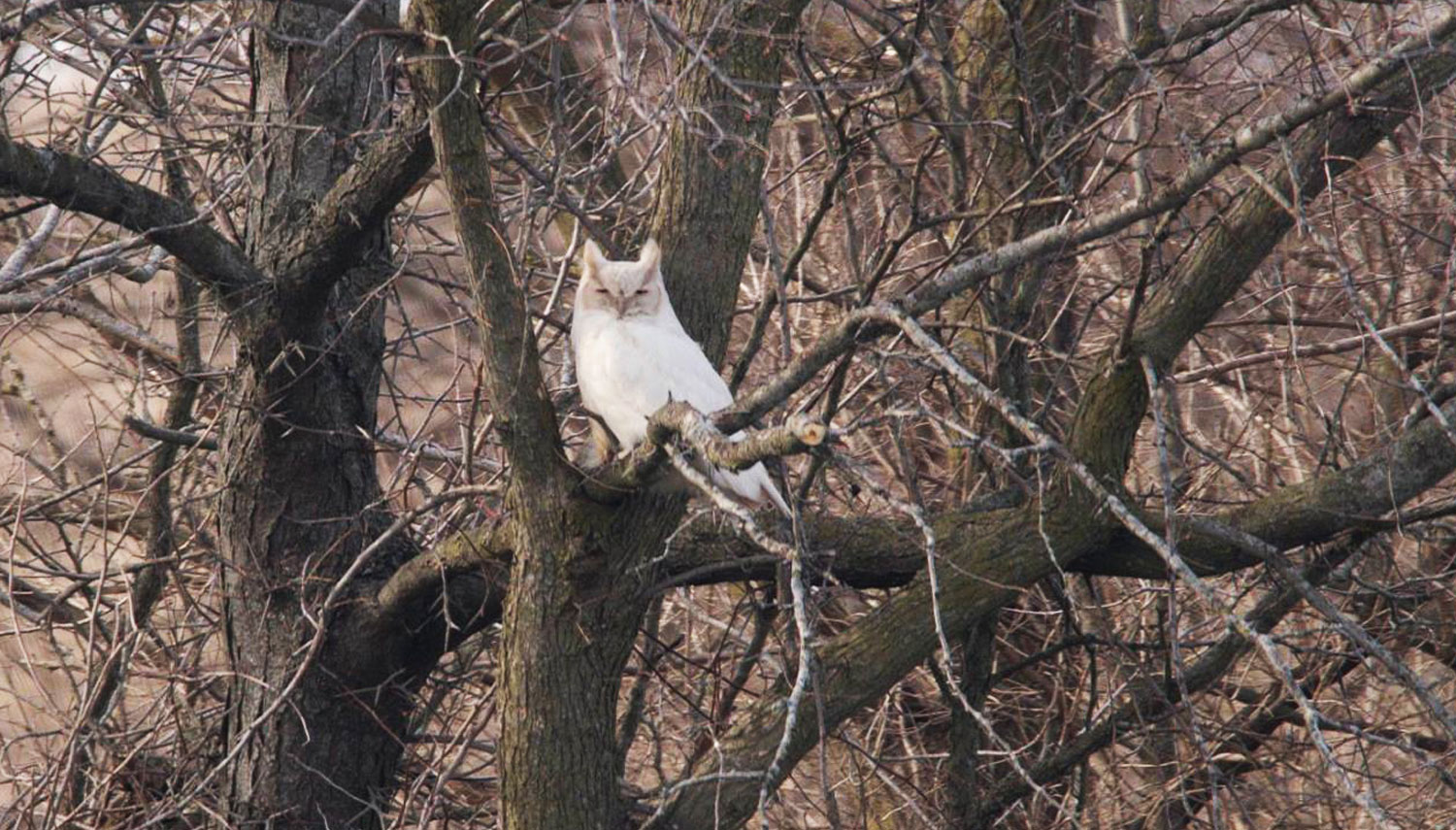 White birds are fairly common in the wild, with some swans, egrets, gulls and even owls known for their snow-colored plumage. But what about white birds that should be a distinctly different color, such as a white cardinal, hawk or great horned owl?

A white great horned owl has been generating some buzz lately in Will County, capturing the attention of birders who are surprised at its white plumage. (The Forest Preserve District does not reveal locations of nests, owls or other sensitive species to avoid them being disturbed by the public).

While unusual, a white great horned owl — or any other bird, for that matter — isn't unheard of. The white plumage is due to a condition called albinism, which is a group of genetic disorders where there is little or no production of the pigment melanin in a bird's feathers. Albinism occurs because of a genetic mutation, and it can result in an animal having a complete lack of or minimal to moderate pigmentation.

The pattern of the animal is usually visible, but appears all white or very faded in color. In birds, this usually affects the feathers, and they can appear white. Individual birds that are affected can have white patches or can be all white. They can show a pattern or have some color but often appear to be bleached out or faded.

While there are potential non-genetic causes for color anomalies, albinism is genetic in nature and is caused by a problem with an enzyme called tyrosinase, which then prevents or restricts the production of melanin.

The white great horned owl has been spotted near the same location at least since last winter, said Joel Craig, a Forest Preserve District volunteer and member of the Will County Audubon Society.

"I had a feeling we’d see it again this year, and sure enough we have, in the same general vicinity," Craig said.

The white great horned owl has all the usual characteristics and features of its species, except for its off-white plumage, Craig said. It still has the easily identifiable horn-like ear tufts that give the owls their name, making it easy to distinguish from the snowy owls we sometimes see in this area in the winter. The owl is also more of an off-white color, rather than the pure white plumage snowy owls are mostly known for.

While the great horned owl generating buzz here is all white save for some more traditional color patterns on its face, albinism can occur to degrees. Some birds are entirely white, but in some cases, only patches of a bird's feathers lack pigment, according to Project FeederWatch. These birds will have patches of all-white feathers, while others appear normal.

Bob Bryerton, an interpretive naturalist for the Forest Preserve District, said albinism is rare in birds. Birds with albinism may have pink eyes, but this is not necessarily the case in all instances.

Both Craig and Bryerton have seen a red-tailed hawk called "Whitey," who spent several years living in the area near Four Rivers Environmental Education Center in Channahon. 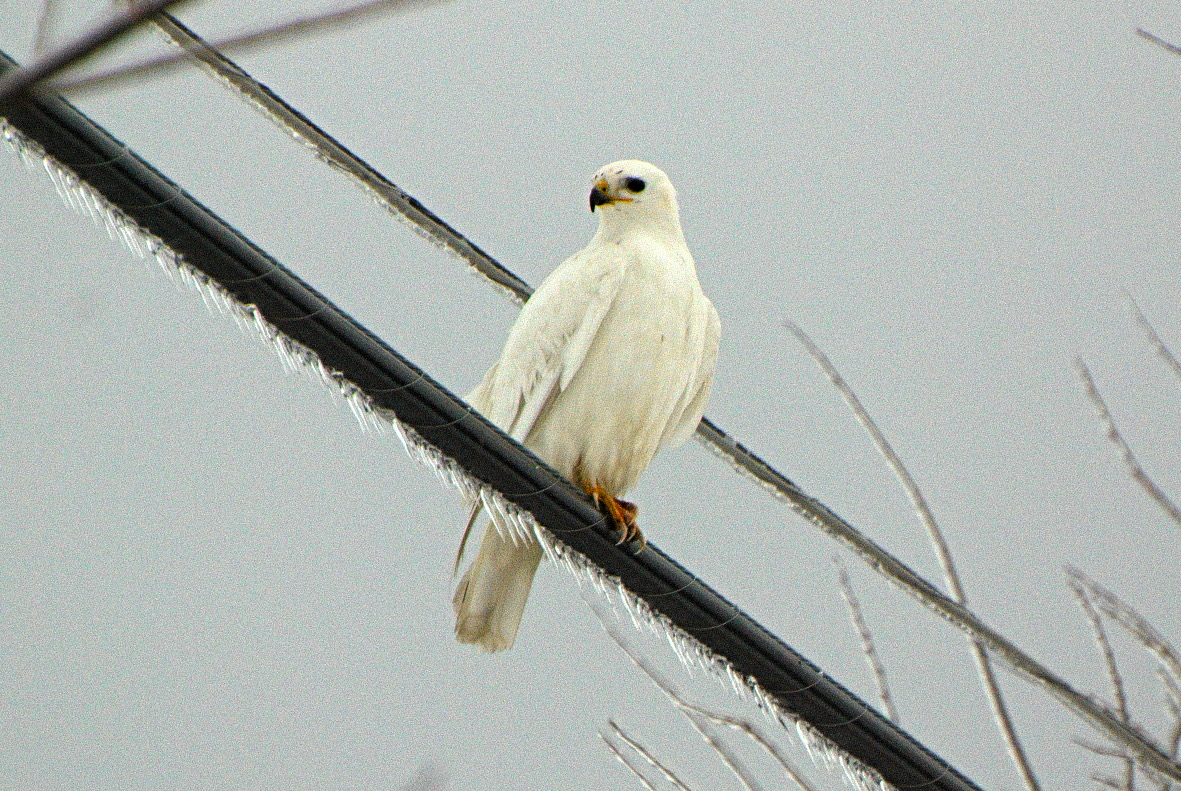 Albinism is not limited to the bird world. It can affect species from all across the animal kingdom, including mammals, reptiles and amphibians. A deer with albinism, for example, may have all-white fur but a dark-colored nose and eyes. And just like birds, other animals with albinism may be only partially white, with some parts of their bodies retaining normal coloring. This is typically referred to as "piebald."

The color patterns that result may affect the animal's survival.

"Because these birds can be all white, it is thought that they are more easily targeted by predators since they will stand out and the natural camouflage pattern is lost," Bryerton said.

Research has shown that some predators in the animal kingdom hunt by looking for movement and shapes, and in these cases albinism may not cause a bird to stand out as much as they do to us. However, Bryerton said, it still seems as though this lack of coloring would be a disadvantage when all the other birds around it are able to blend in.

Albinism does affect birds in a few others ways as well. First, melanin is an important part of a bird's feathers. Without the pigment, feathers wear out more quickly and affect a bird's ability to fly.

"Weak or worn feathers are also not as good for insulation and don’t absorb heat as well, so they could affect the birds ability to survive in cold weather," Bryerton said.

Colored plumage also plays an important role in courtship for some bird species, he said. Without the colored feathers traditional to their species, these birds may not be able to attract a mate or may only attract a mate that is less fit.

Although albinism may put some birds at a disadvantage, Bryerton said many birds are able to survive with the condition. Whitey, the red-railed hawk at Four Rivers, and the great horned owl have both been seen in the area over an extended period.

"The hawk we saw at (Four Rivers) was there for several years and as far as we know, nested somewhere in the area," he said. "It appears the great horned owl is nesting as well, so while it may pose some extra challenges, these birds seem to be up to the challenge."

Editor's Note: This article has been updated since it was originally published.