What's the difference: Frog vs. toad 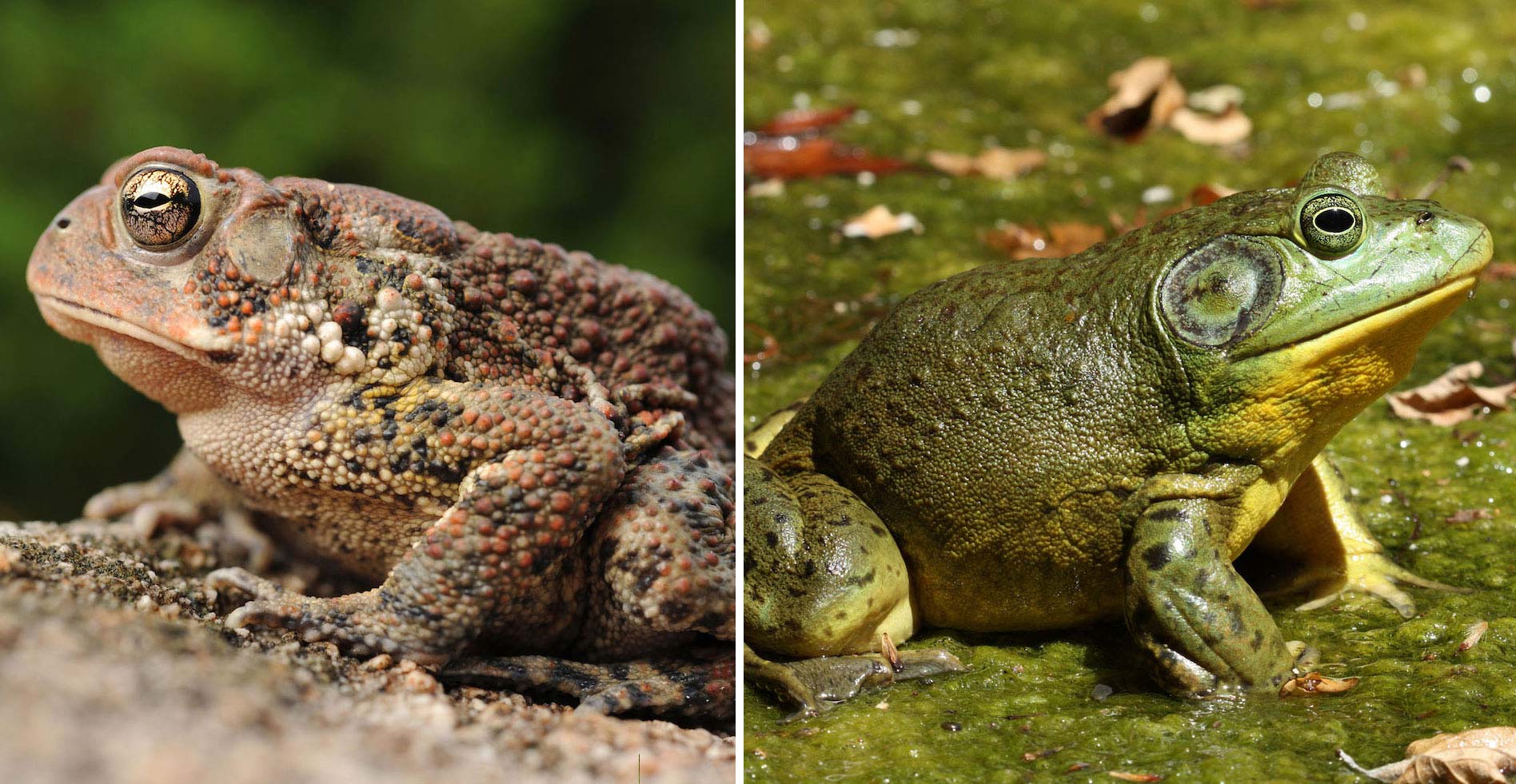 Don't know the difference between a frog and a toad? You aren't alone. While frogs and toads are both amphibians, they are separate families of animals. And while they are similar in many ways, they do have differences, although they are not always clear cut.

Let's dive into their similarities and differences, starting with this fun but confusing fact: All toads are frogs, but not all frogs are toads, according to Penn State University. Basically, toad is a classification of frog. And here's another fun fact: There's no scientific distinction between a toad and a frog, according to the University of Michigan's Animal Diversity Web.

Confused yet? Who could blame you?

In terms of scientific classification, both frogs and toads belong to the order Anura, which means "without a tail," according to Penn State University. Within the order Anura are several families of animals, including Ranidae, which are referred to as true frogs, and Bufonidae, which are referred to as true toads. Other families of frogs and toads exist — for example, tree frogs are a different family of frogs than true frogs — but these are smaller groupings of species, and some are specific to certain regions of the world.

While many frogs and toads look similar, there are some differences. For example, frogs typically have long, strong hind legs that aid them in leaping, while toads have shorter hind legs more suitable for walking than hopping, according to Wildlife Preservation Canada. The difference in their legs also leads to a behavioral difference when approached by humans. Frogs will usually use their long, strong legs to leap into the water when approached, while toads are more likely to sit still and wait it out. If toads do jump away, their jumps are shorter than frogs'.

Another difference in their appearance is their eyes. Frogs usually have big, bulging eyes, while toads' eyes are more subtle in appearance.

One of the biggest physical differences between frogs and toads is their skin. While frogs have smooth or slimy skin that is moist, toads have thicker, bumpy skin that is usually dry. The differences in their skin are because of their typical environments. Frogs spend more time in the water or are usually very close to water while on land, so their skin stays moist. Toads, on the other hand, spend more time on land and travel further from water, Wildlife Preservation Canada reports. Unless you live very near water, you're more likely to see toads in your yard because they travel farther from water.

A big difference between frogs and toads is that all toads are poisonous, while frogs are not. Toads have parotoid glands behind their eyes that secrete toxins. These toxins permeate their skin, so you can come into contact with them if you pick them up, according to the Conserve Wildlife Federation of New Jersey. Most of the toxins are mild to humans, but you should always wash your hands thoroughly with soap and water after handling a toad.

Both frogs and toads lay their eggs in water, but you might be able to tell them apart by the egg arrangement. Frog eggs are usually one mass or cluster, while toad eggs are usually arranged in a chain.

And both frogs and toads are indicators of a healthy ecosystem, according to Wildlife Preservation Canada. They can't live in polluted habitats and are sensitive to changes in their environment, so the presence of frogs or toads is a sign the habitat is healthy, while a sudden change in their presence can indicate the area has become polluted or is otherwise unbalanced.

Another similarity is that both frogs and toads are widespread across the world, although they don't live everywhere. Frogs live on every continent except Antarctica, while toads live all across the world with the exception of the polar regions, Australia, Polynesia and Madagascar, according to Wildlife Preservation Canada.