What you need to know about invasive and destructive spongy moths 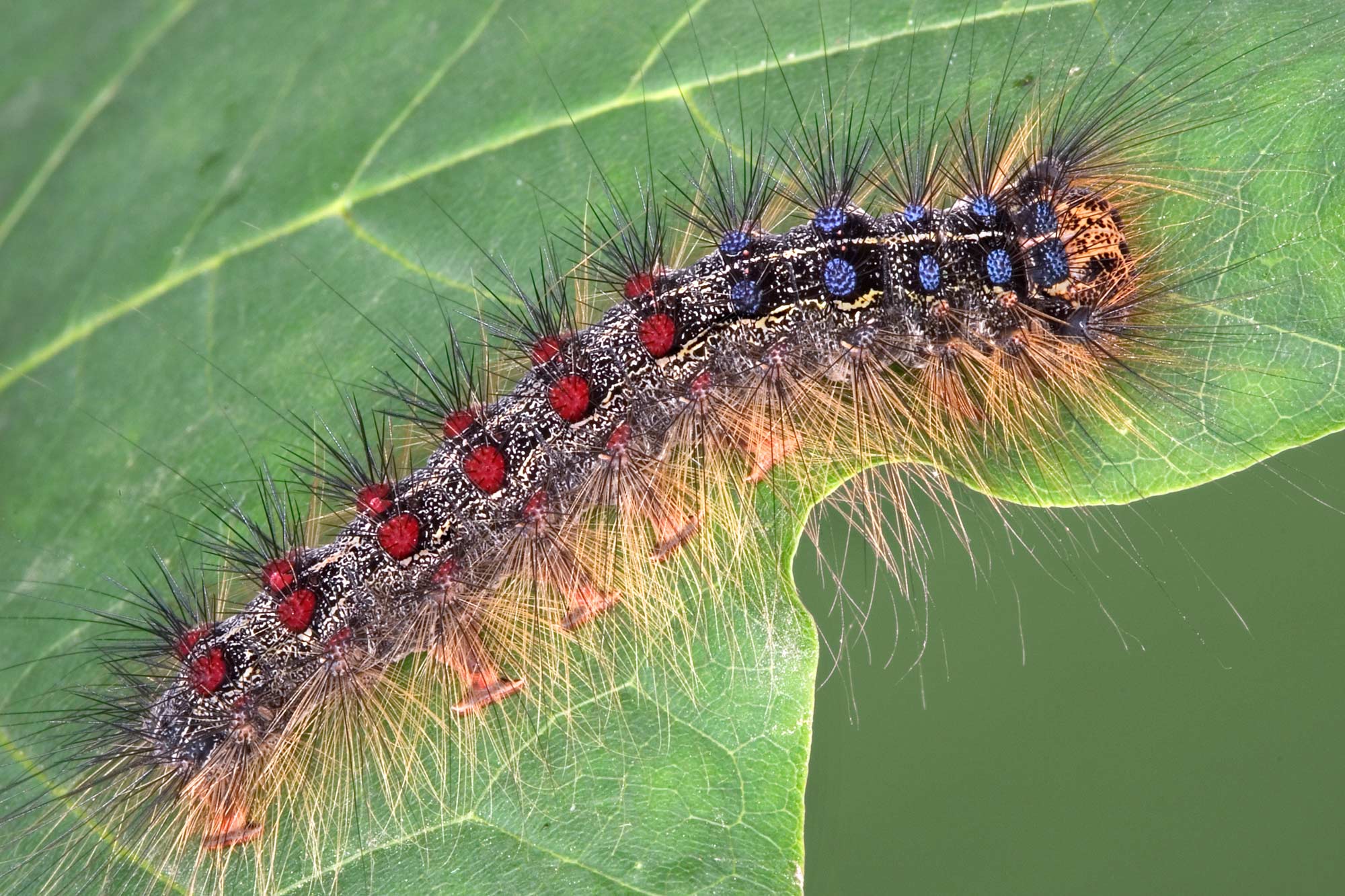 Spongy moth caterpillars eat the leaves of many kinds of trees and shrubs, but they prefer oak trees. (Photo via Shutterstock)

Moths and butterflies — and the caterpillars that proceed them — are often prized finds in people's yards, a treasured sight and proof that their yards are healthy and bountiful. But some caterpillars' munching is destructive, doing harm to local habitats. Such is the case with the spongy moth caterpillar, an invasive species that can damage and destroy trees.

These moths are one of the most well-known invasive species in many parts of the United States, but their common name was recently changed to spongy moth because the original common name included an offensive racial slur, Smithsonian Magazine reports.

The invasion of spongy moth caterpillars started about 130 years ago in Boston and around New England, according to the U.S. Forest Service. Today, the invasion stretches from North Carolina to Minnesota, with some hotspots in Illinois.

Spongy moths are voracious eaters, and their big appetites cause problems for local trees. They can feed on 500 different kinds of trees and shrubs, but they prefer oak trees, according to the department of agriculture.

Their caterpillar stage lasts seven to 10 weeks, during which time they eat the leaves on the trees they are on. One single caterpillar can consume 11 square feet of vegetation during its life, and the presence of many caterpillars can have a significant effect, the department of agriculture reports. If a tree loses more than 50 percent of its foliage to the caterpillars for more than two consecutive years, it can be severely weakened and could die.

These insects overwinter in the egg stage, and the caterpillars hatch from mid-April to mid-May, when temperatures are at least 60 degrees Fahrenheit. They then feed on vegetation through May and June as they grow and mature.

In late June or early July, the mature caterpillars consume vegetation until their pupal stage, during which they transform into moths. The moths typically emerge from their pupal case after a week or two. Female moths, which are whitish in color with a dark-colored V on their forewings, cannot fly, according to the University of Wisconsin Extension. The males, which have large antennae and are a mottled brown or gray in color, can fly, but do so only in the afternoon, not at night as many other moths do. Spongy moths do not eat. They live for about a week, with the sole purpose of reproducing and laying the eggs of the next generation.

Several counties in northern Illinois, including Will County, are under quarantine to help control the spread of the spongy moth. Lake County was the first Illinois county put under quarantine, in 2000. Cook, DuPage and McHenry counties were added in 2007. Will County was added in 2017, along with Kane, Kendall and LaSalle counties, according to the Illinois Department of Agriculture.

The quarantine means firewood and nursery plants from the affected counties must be inspected and certified, and nurseries and nursery dealers must treat their property and stock for spongy moths, reports the department of agriculture. In addition, people leaving the counties under quarantine must have all their outdoor equipment inspected.

As part of efforts to control the spread of these moths, the Illinois Department of Agriculture conducts an annual treatment application program of infested sites, including some in Will County. The program is funded by the state's agriculture department in conjunction with the U.S. Forest Service and the Slow the Spread Foundation.

Through the control measures, affected sites in Illinois are treated in one of two ways: with a pheromone or with a bacteria called Bacillus thuringiensis var. kurstaki, or BtK. The pheromone works by confusing the male caterpillars to prevent them from breeding, while BtK affects their digestive system and causes a fatal bacterial infection, according to the department of agriculture. Both applications are applied aerially, either by helicopter or airplane.