What's the difference?: Mouse vs. rat 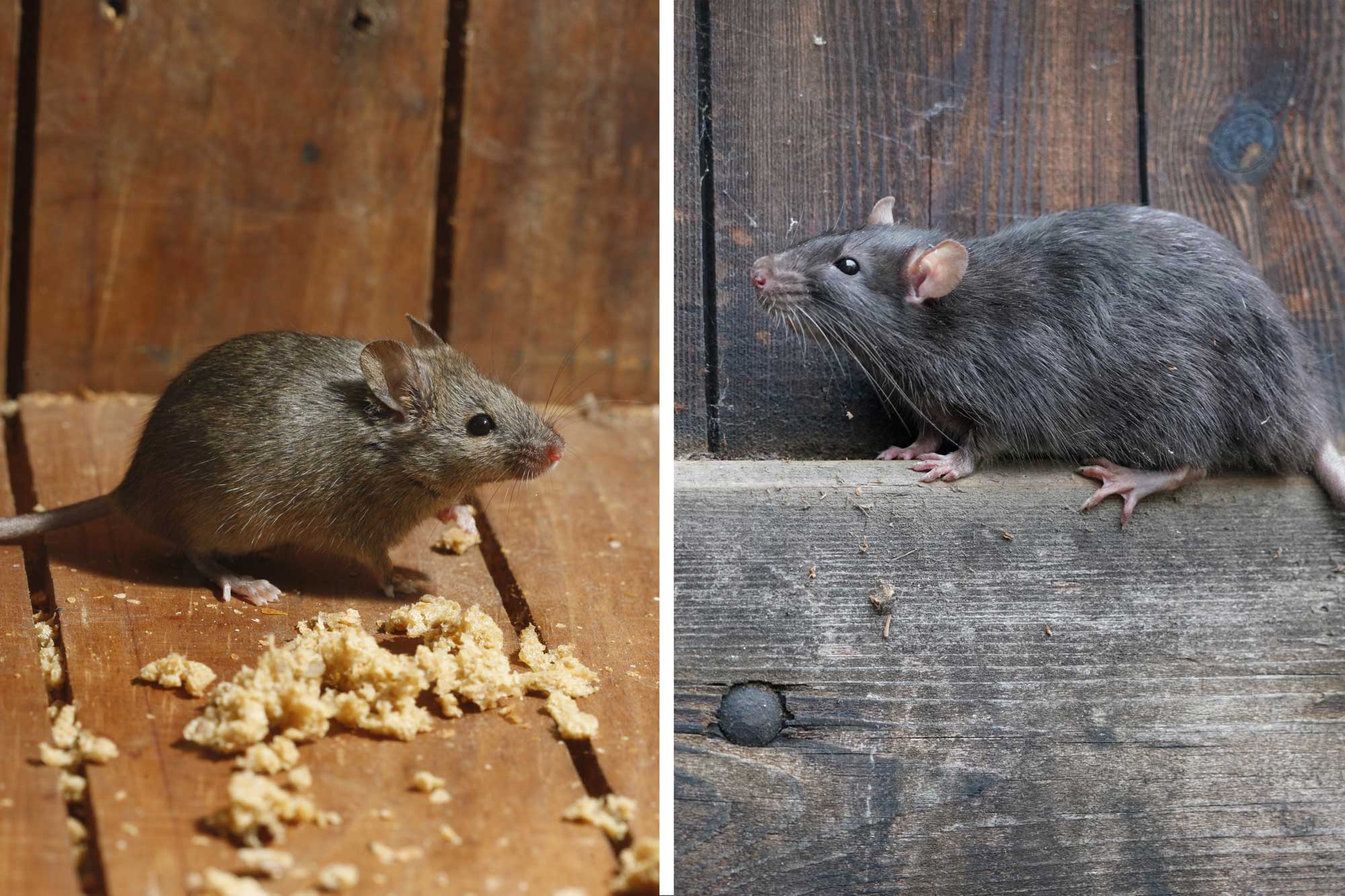 A house mouse (left) and a Norway rat. (Photos via Shutterstock)

Unless you happen to keep them as pets, probably your only thought if you see a mouse or rat in your home is how to get it out. And while we may lump mice and rats together as nuisance animals, they are distinctly different animals — and not all mice and rats are nuisance animals that invade our homes.

The mice and rats many people are most familiar with because they do sometimes make their way inside our homes and other buildings are house mice and Norway rats, or brown rats, according to Wildlife Illinois. These species were introduced from Europe and are not native to the United States. Illinois is also home to other mice and rat species that are native to the area, including the deer mouse, white-footed mouse and eastern woodrats, among some others that are less common.

The eastern woodrat is state endangered and only found in seven counties in the southern part of Illinois, while the deer mouse and white-footed mouse are common across the state, Wildlife Illinois reports. Because they are native, all three are beneficial to the ecosystem, and they all serve as an important food source for animals higher up the food chain, including coyotes, foxes, hawks and owls.

One main difference between mice and rats generally is that rats are quite a bit larger than mice, Treehugger reports. This is true of house mice and Norway rats. House mice are typically between 5 inches and 7 inches long, including the length of their tails. Norway rats can be up to three times as long, between 12 inches and 18 inches long including their tail length.

Our native mice and rat species fit this mold as well. Eastern woodrats are similar in size to Norway rats, Wildlife Illinois reports. Similarly, white-footed mice and deer mice are about the same size as house mice, with both generally between 6 1/2 inches and 7 inches long.

White-footed mice and deer mice can be hard to distinguish from one another because they are similar in size and appearance, according to Wildlife Illinois. They both have grayish-brown or reddish-brown fur with large ears and large black eyes. One difference between them is that white-footed mice tend to look larger because they have longer tails, usually about half the length of their bodies. Deer mice tails are usually closer to one-third of their body length, sometimes longer.

Another key distinction between mice and rats generally is the shape of their snout. Mice tend to have pointier, more triangular-shaped noses, while rat noses tend to be flatter and more blunt, according to Treehugger. And while rat tails are usually long and hairless, many mice species have at least some short hair on their tails, with variations among species.

Our nuisance mice and rats can be found almost anywhere there are buildings to invade, but rats are more common in urban, city settings. House mice typically live in agricultural fields and open areas. Our native mice species have different preferred habitats, with deer mice commonly found in open areas like pastures and fields and white-footed mice most often living in forest edges, according to Wildlife Illinois. Neither is as prolific at entering our homes and buildings as the house mouse, but white-footed mice will sometimes seek shelter in homes near wooded areas.

All our local mice and rats, including the non-native species, eat a varied diet of both animal and plant matter, including insects, seeds, nuts and fruits. When they become nuisance pets in our homes, mice and rats will eat virtually any food they can easily get to, including accessible human and pet foods.

Mice and rats can pass diseases to humans. Rats, deer mice and white-footed mice can be carriers of hantavirus, which can be spread to humans by breathing in dust contaminated with feces, saliva or urine from infected rodents, according to the Illinois Department of Public Health. The deer mouse is the main source of hantavirus in the United States, and the virus is most likely to occur in rural areas where the mouse lives. Mice and rats can also be carriers of leptospirosis, salmonellosis and tularemia, and rats are also carriers of the bubonic plague, but the disease is not found naturally in Illinois and is not common in the United States.

Deer mice, house mice, white-footed mice and Norway rats are not protected by the Illinois Wildlife Code and may be removed without a permit from your property. Trapping is an effective means of controlling mice in a home or building, and it is the preferred method when only a few rodents are present, the IDPH reports. When rodents have infested a home of building, consulting with a professional exterminator is advised.