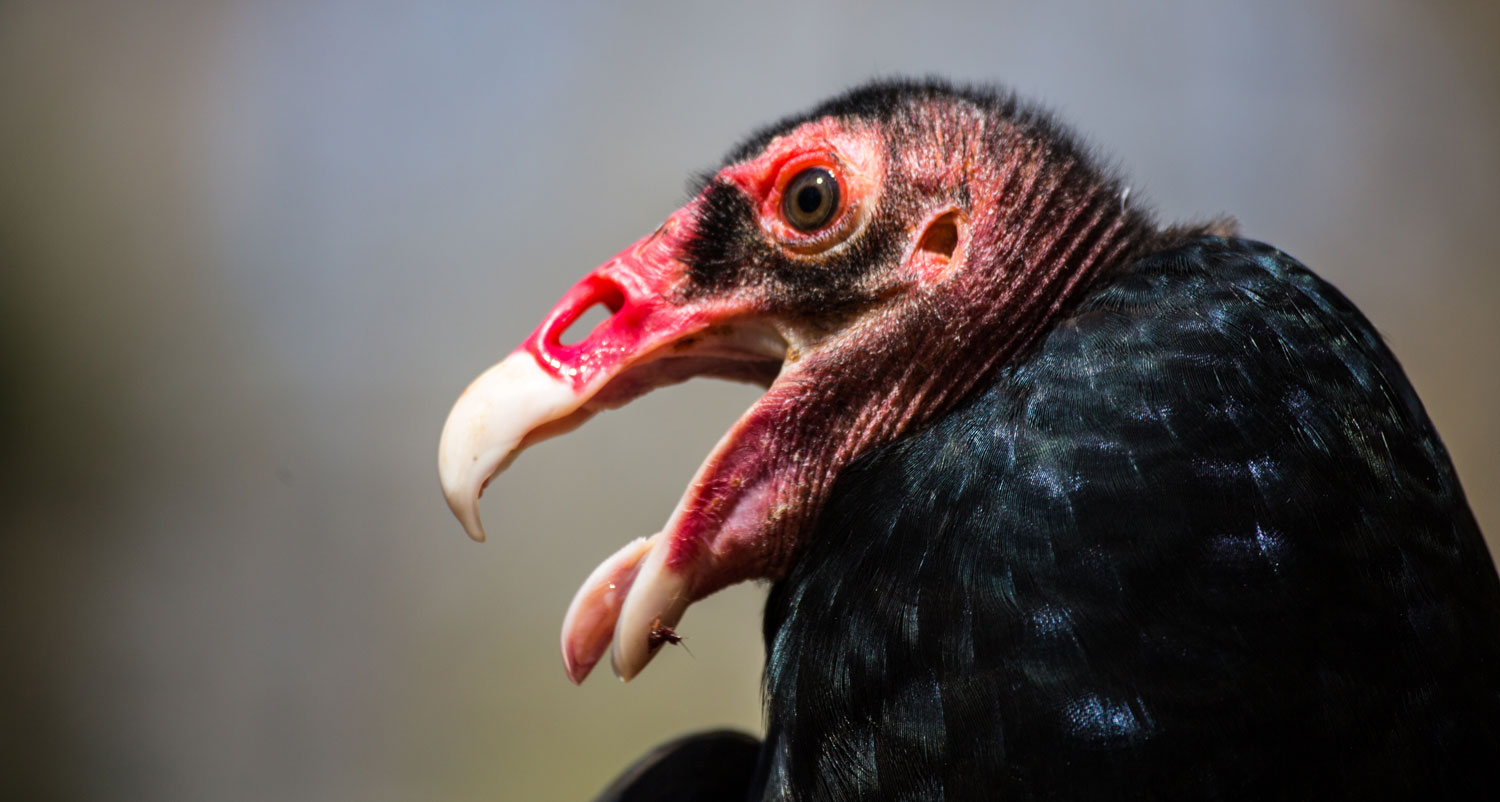 Large birds soaring overhead are a common sight, but how do you know if you're seeing a hawk or a vulture or even an eagle? In the case of a turkey vulture, their less-than-impressive soaring ability can be a tell-tale sign.

Turkey vultures are commonly seen soaring overhead, but they appear less agile and graceful than most raptors, looking a little unsteady in the air. They often appear to be teetering or wobbly in flight, and they frequently tilt from side to side, according to the Cornell Lab of Ornithology.

And there's one more unique trait that separates turkey vulture's from other raptors — and even most species in the animal kingdom. Turkey vultures have an unusual way of keeping potential predators and threats at bay: They vomit on them. And they have good range, too. They can heave their stomach contents as far as 10 feet!

Here's some more information about these fascinating, if a little disgusting, birds.

These birds got their names because of their resemblance to wild turkeys. Both birds have bald red heads and dark plumage, although wild turkeys are much bigger than turkey vultures and don't soar high in the air in flight.

Turkey vultures are also sometimes called buzzards. In the United States, the terms vulture and buzzard are used interchangeably. However, elsewhere in the world, buzzards and vultures refer to separate species. The United States is home to just two vultures — the turkey vulture and the black vulture — and no buzzards, but there are actually 23 kinds of vultures and 26 different buzzards living across the world, according to The Spruce.

In flight, turkey vultures can be easily identified because their wings are elevated slightly in a V position rather than extended horizontally from their bodies, according to the Cornell Lab of Ornithology. At a distance they look black, but their feathers are actually dark brown. Their bald heads are red, with a pale, almost white bill, and their feet and legs are pinkish.

Buzzards are big for a raptor; only condors and eagles are larger, according to the Cornell Lab of Ornithology. Their wingspans range from about 5 1/2 feet to 6 feet. They stand about 2 1/2 feet tall, and they weigh between 2 pounds and 4 pounds.

The bald, red heads on these birds serve a purpose; they allow the birds to stick their heads all the way into an animal carcass without pieces of flesh getting stuck on their feathers, according to Audubon California.

Turkey vultures can be found all across the United States. In northern Illinois, they are migratory, so we often see them during the summer, but not as often in the winter because they travel south to their wintering grounds, according to the Illinois Department of Natural Resources.

We often see these birds along roadsides or soaring high above open lands, and they are not very selective about their habitat, preferring open grass and farmland as well as more forested areas. However, they are less common in densely forested areas, according to the National Audubon Society.

These raptors eat carrion, or animal carcasses, almost exclusively, according to the Cornell Lab. They only very rarely eat live prey and also occasionally eat decaying plant matter. They like fresh meat, and they prefer to eat mammal carcasses, but will also eat dead birds, reptiles, amphibians and fish.

While birds do not typically have a good sense of smell, turkey vultures are an exception. Their good sense of smell helps them find food, but most often they find food by soaring overhead and watching the ground for the activity of other animals that scavenge for carrion.

Turkey vultures are like nature's janitors. They rid our woodlands, grasslands and roadsides of dead animals. People often believe that turkey vultures, like other raptors, are a threat to living animals. This isn't the case, however, as they only rarely even eat live prey and do not hunt livestock or our pets, according to the Missouri Department of Conservation.