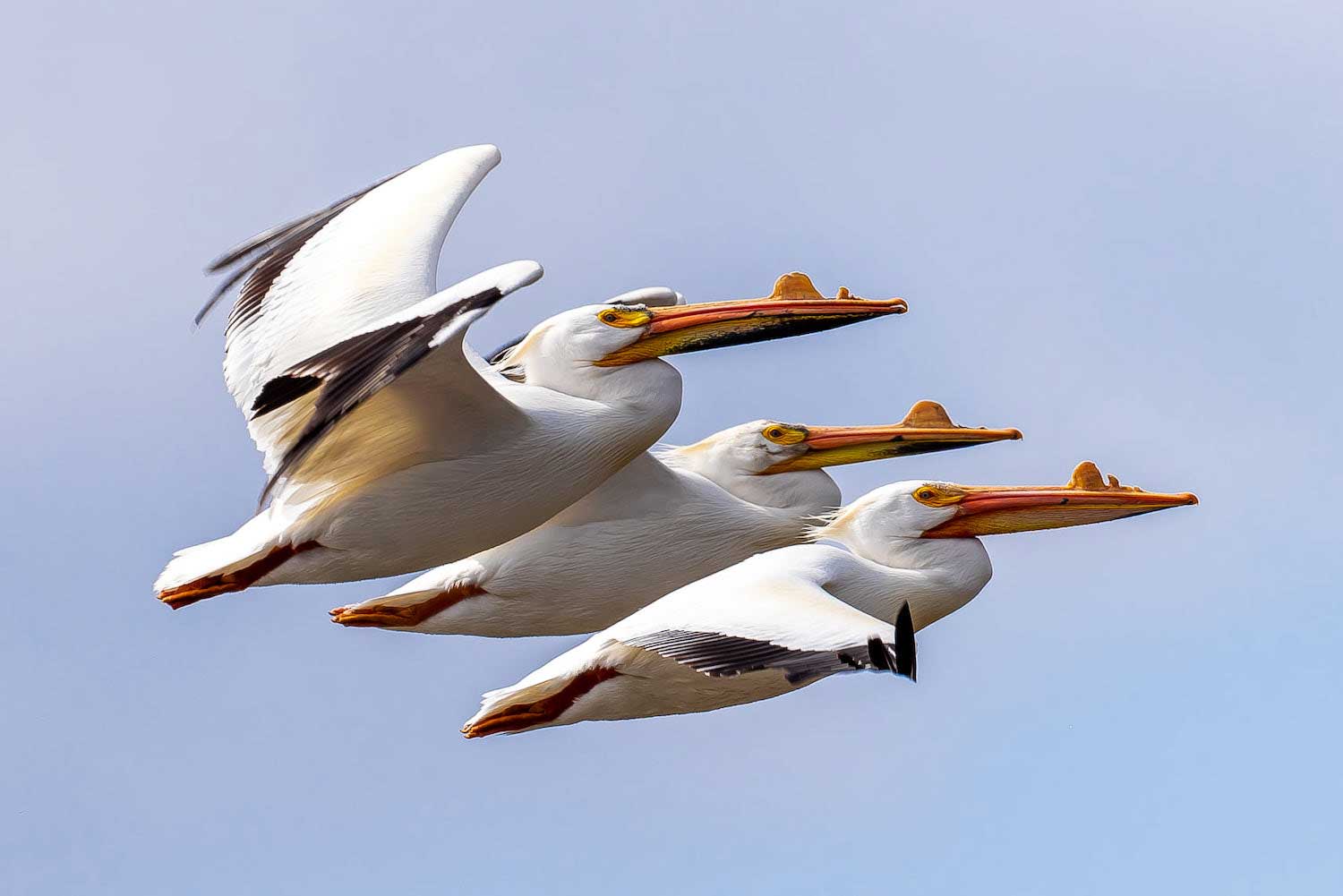 Good news for avid birders — the pelicans are back around Four Rivers Environmental Education Center in Channahon, having been spotted on the DuPage River and other local waterways this week.

The pelicans that pass through Will County each fall and then again in the spring are American white pelicans, one of the largest birds in North America, according to the Cornell Lab of Ornithology. These large white birds are clunky and awkward on land, but are good swimmers and graceful flyers. In flight is where they reveal a secret as well: The pelicans appear all white on land or in water, but in flight reveal jet-black feathers on their wingtips that starkly contrast their otherwise-white plumage.

In the fall, the pelicans pass through on their way from their breeding grounds in the Dakotas and Canada to their wintering grounds along the Gulf of Mexico. They usually arrive sometime in September, and this year they were just about on their usual schedule, with about 50 pelicans being spotted in the last days of August. They'll stick around until sometime in November, then we won't see them again until about mid-March, when they stop over on their return trip to their breeding grounds.

The number of pelicans seen locally can vary throughout their stopover periods, and, as with all wildlife, there's no guarantees they'll be present at any given time. One of the places where they frequently congregate and can be seen with regularity is McKinley Woods — Kerry Sheridan Grove in Channahon. A few other places in the preserves where you might glimpse these big birds include Rock Run Rookery Preserve in Joliet and Lake Renwick Preserve in Plainfield. At Lake Renwick, you can sometimes spot them from Copley Nature Park, where they'll tuck themselves behind the islands to protect themselves from the wind, said Jess McQuown, an interpretive naturalist at Four Rivers. Away from the preserves, another pelican hot spot is along Front Street by the boat launch in Channahon.

Many people aren't aware pelicans make regular appearances in Will County, because the American white pelicans are the lesser-known cousins of brown pelicans, which live along the ocean and gulf coasts in the southern United States. The American white and brown pelicans are among about a half-dozen pelican species in the world, all of which have the long bill and throat pouch for which they are known, National Geographic reports.

Unlike brown pelicans, which dive into the water for food, American white pelicans eat from the water's surface. They dip their bills into the water to catch fish and other aquatic animals, sometimes upending themselves into the water like dabbling ducks do, Cornell Lab reports.