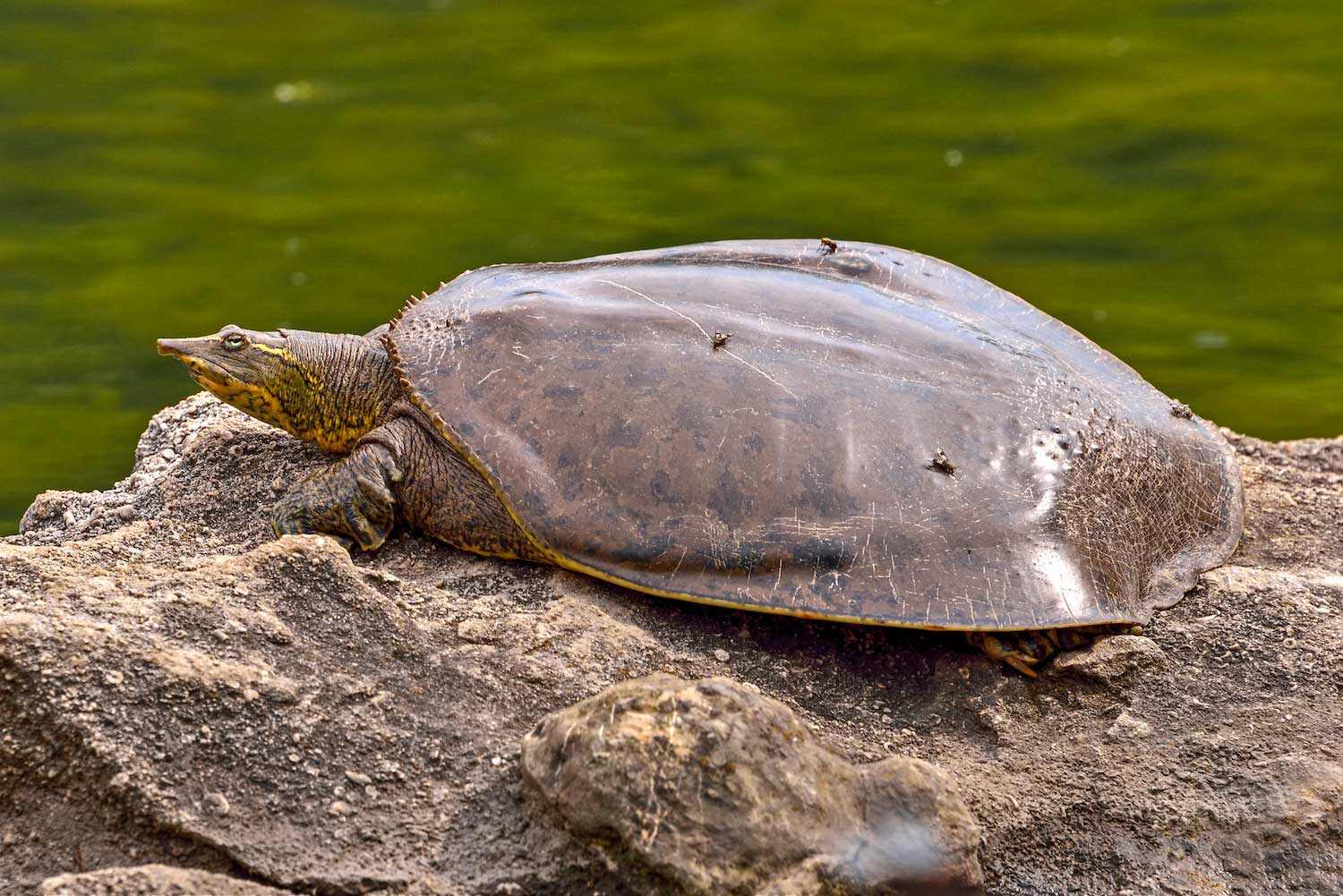 A hard shell is a turtle's most well-known feature, but not all turtles are so lucky as to have a protective shell to retreat into when danger nears. Softshell turtles don't get nearly as much protection from their shells, but they survive and thrive despite this.

The eastern spiny softshell turtle is one of two softshell turtles in Illinois, and it is the more widespread of the two. The other, the smooth softshell turtle, is an endangered species in Illinois, according to the Illinois Natural History Survey. Because of their soft shells, these turtles are more vulnerable to predators. As a result, they are more aggressive than many turtle species and will scratch and bite if disturbed.

They spend most of their time in the water, foraging, floating around or buried in the muddy or sandy bottoms of the waters they inhabit, although they do come out of the water to bask in the sun from time to time, according to the Illinois Natural History Survey. Like most turtles in the United States, spiny softshell turtles are dormant in the colder part of the year. They will dig themselves into the mud or sand at the bottom of the water and lie dormant, usually from about October to April.

Learn more about what makes these turtles unique.

Spiny softshell turtles are very similar in appearance to another softshell turtle, the smooth softshell turtle. The main physical difference between the two species is the presence of small spines along the front edge of the carapace that spiny turtles have but smooth turtles do not.

Eastern spiny softshell turtles aren't as large as snapping turtles, but they are one of the biggest freshwater turtles in the United States, the National Wildlife Federation reports. Their soft, rubbery shells are their most noteworthy feature. A softshell turtle's carapace is circular rather than oblong. Females are usually about twice as big as the males, with female shells measuring between 7 inches and 19 inches long compared with 5 inches to 10 inches for males. Another noteworthy feature on these turtles is their nose, which is long and similar in appearance to a pig's.

Out of the water, softshell turtles have a flat appearance, while other turtles are more domed. This has led to the nicknames flapjacks and pancake turtles, the Illinois Natural History Survey reports. Their bodies are tan or olive green and usually have small black spots or speckles all over them. They have webbed feet to help them swim and move easily through the water.

These turtles are native to North America, living in parts of both the United States and Canada. They are found mostly in the east-central United States, with their range extending from western New York to as far east as the Rocky Mountain region, according to the U.S. Geological Survey.

Spiny softshell turtles can live in a variety of aquatic habitats, but need a well-oxygenated water source, according to Animal Diversity Web. They are typically found in lakes, rivers and streams, and they prefer open areas with little to no vegetation.

These turtles are carnivores, feasting on all manner of aquatic creatures. Their main food sources are crayfish, aquatic insects and, to a lesser extent, small fish, but they also eat mollusks and amphibians, Animal Diversity Web reports.

Spiny softshell turtles don't eat aquatic vegetation, but they do rely on it while they forage for food. They typically move along the bottom of the water, sticking their heads into pockets of vegetation to catch prey hiding inside. They will also stick their long snouts under rocks and other objects to find food, according to the Illinois Natural History Survey.

Spiny softshell turtles are important to the ecosystem because of their role as predators. Because they prey on crustaceans and aquatic insects as well as fish, they help keep these population under control in their habitat, according to Animal Diversity Web.