Time to slow your roll: Turtles are on the move for nesting season 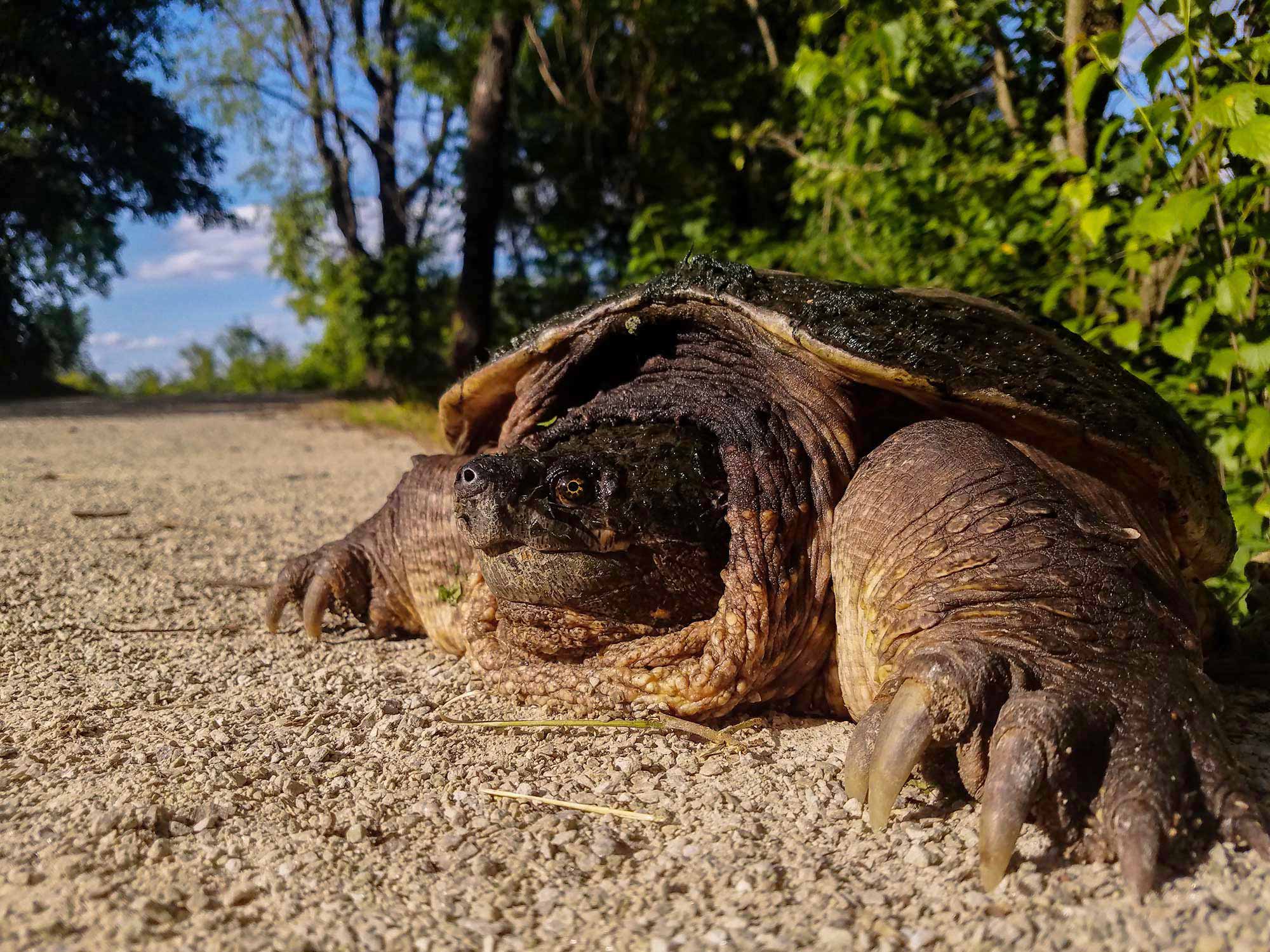 Spring brings with it a flurry of activity among wildlife, and turtles are no exception. In fact, turtle mating season is just around the corner, with many turtles laying eggs between mid-May and early July.

While turtles spend much of their lives in water, right about now is when we start seeing turtles on land. That's because all turtles must nest on land, and this time of year is when they begin scouting out nesting locations. They may also come onto land to forage for food and search for a mate, said Becky Blankenship, wildlife ecologist for the Forest Preserve District. In a week or two, they'll head onto dry land again, making their way to nests to lay eggs.

Any permanent bodies of water will have turtles living in them. That means most all of the forest preserves have turtles within them, and they can be found in and around many homes and neighborhoods as well. At this time of year, turtle nests can often be seen along the trails at the preserves. The nests are typically flask-shaped holes, which the females scoop out of the soft ground with their back feet, according to the Illinois Department of Natural Resources.

Most of the 17 turtle species in Illinois lay oval-shaped eggs, but snapping turtles and softshell turtles lay spherical eggs, IDNR reports. Small turtles like the spotted turtle may only lay three to five eggs, but larger species, like snappers, can lay as many as 40 eggs in their nests.

Because turtle nesting season is nearly upon us, drivers should be mindful when driving on roadways near waterways, where turtles are often a common sight.

@willcoforests Turtles are on the move and here’s a step-by-step process of how to help it safely get where it’s going. Be careful with those snapping turtles! #turtlesoftiktok #turtlecrossing #snappingturtle #snappingturtles #matingseason #HowTo #trailadventure #hikingadventures #hiking #hikingtiktok #herpetology ♬ Lazy Sunday - Official Sound Studio

This time of year can be a dangerous time for turtles, particularly turtles that cross our roads. They are famously slow, and our cars are not. In fact, being hit by cars is a significant mortality risk for turtles, IDNR reports.

During this time of year, it's a good idea to keep your eyes peeled for turtles on area roads. Slow down and safely go around the turtle if you see one.

If at all possible, allow the turtle to cross the road on its own. If it's safe for you to move the turtle and safest for the turtle to be removed from a high-traffic area, pick it up by both sides of the shell, just behind the front legs.

Many turtles will pull their legs and heads in when picked up, but if they don't they may be able to kick at you, the Turtle Rescue League advises. When carrying a turtle, keep it low to the ground to prevent a big fall if it kicks loose or you drop it.

One important tip when moving a turtle off a roadway: Always move it in the direction it was traveling, even if it seems to be moving away from the water source where it lives, Blankenship said. Turtles know where they are going, and if you place it in a spot opposite from the direction it was headed, it will try to cross the road once again.

A word of caution for good Samaritans who move turtles out of harm's way: They may scratch or bite, and they will likely urinate on you, IDNR reports. Wear gloves and long sleeves if you have any available. If you have a towel or a floor mat in your car, you can place the turtle on the mat and drag it across the road — again, in the direction it was heading.

You should never pick up a turtle by its tail, because it can injure the animal. And always wash your hands with soap and hot water after handling a turtle to protect yourself from salmonella, Blankenship advises.

Snapping turtles and softshell turtles are both aggressive, so they are best left alone. Softshell turtles don't like to be handled, and they have long necks that can easily reach around and bite their handlers.

If you must pick up a snapping turtle, here's a video from the Toronto Zoo outlining the proper steps to take.