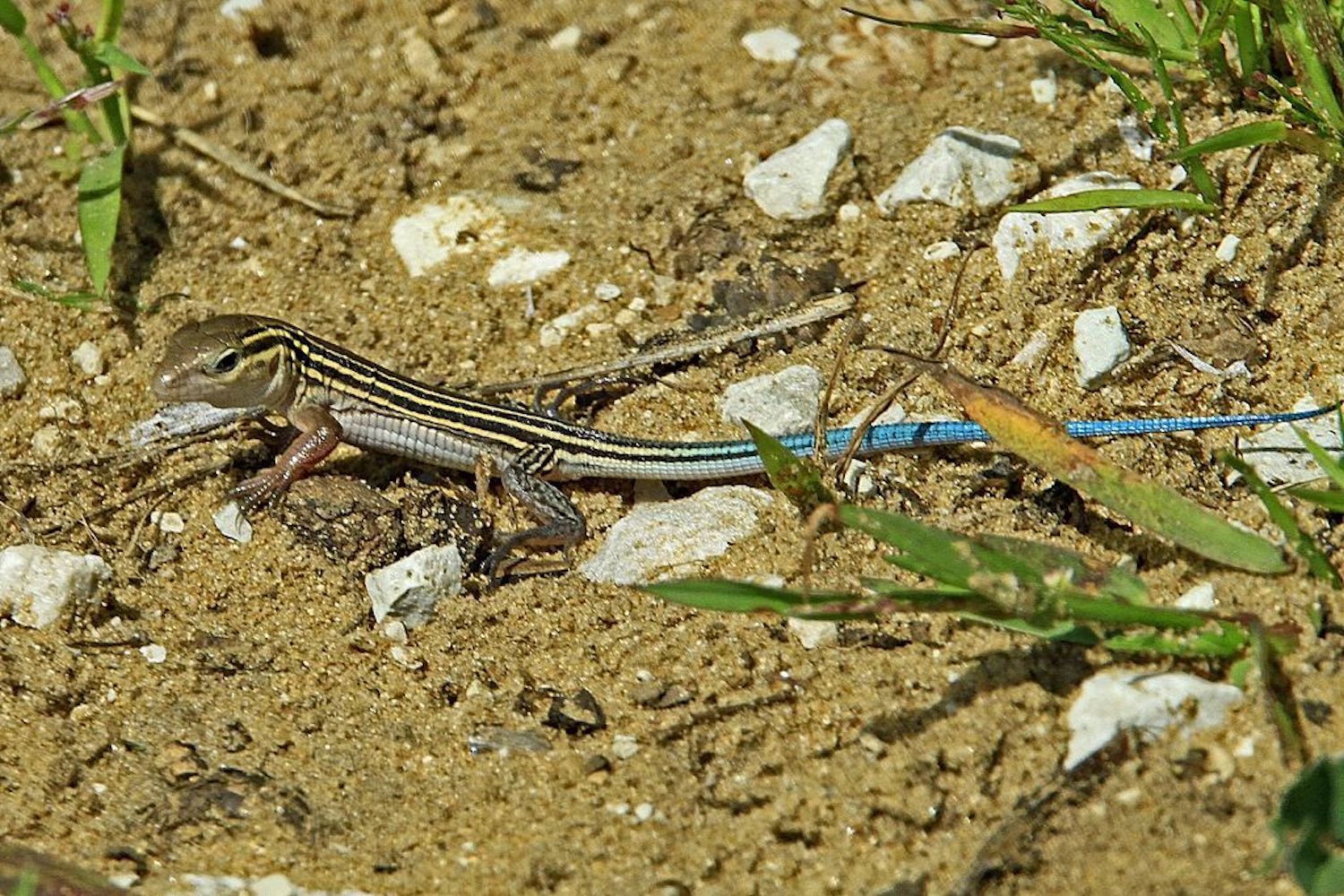 If you think about the reptiles that live around our homes and neighborhoods, some snake species probably come to mind. And probably turtles, too. But lizards?

Six-lined racerunners are most active in the morning, when they hunt for food. Later in the day, they spend their time basking in the sun, according to the Animal Diversity Web. At night and during times of bad weather they typically burrow into the ground.

Six-lined racerunners have long tails, which helps them evade potential predators. If a predator catches them by the tail, they can break it off as a means of escaping, Animal Diversity Web reports. However, without their tails, the lizards aren't as fast and agile on their feet.

Read on to learn more about these lined lizards.

It will come as no surprise that six-lined racerunners do, in fact, have six lines running down their bodies, according to Animal Diversity Web. The lines are usually light in color, and they run from the backs of their necks to the ends of their tails. Their scientific name, Aspidoscelis sexlineatus, also refers to these lines, with "sex" meaning six and "linea" meaning line in Latin.

Six-lined racerunners have thin bodies, and it’s not a stretch to say they are almost all tail. They can be between 6 inches and 10 inches long, but their tails account for about 70% of their total body length, according to Animal Diversity Web.

They are mostly dark in color, ranging from black to dark brown or green, and their namesake stripes stand out because they are much lighter in color, usually yellow, yellowish-green or white. Like all reptiles, these racerunners have scales, but they aren’t shiny in appearance. Instead, they appear to have velvet-like skin, Animal Diversity Web reports.

Young racerunners are only about an inch long when they hatch, and they have blue tails and bright green stripes. As adults, males have a blue throat during mating season.

These lizards mostly live in open areas like savannas, prairies, fields and open woodlands, IDNR reports. In Illinois, the racerunner lives in areas along the Illinois and Mississippi rivers as well as in the far southeastern counties of the state. In Will County, we typically see racerunners in the sandy soil preserves in the southern part of the county, including Braidwood Dunes and Savanna Nature Preserve. The lizards are more common in the southern part of the state than the sandy, hilly prairies in northern Illinois, Illinois Natural History Survey reports.

They prefer sunny areas with dry soils and little vegetation. Their range outside Illinois includes most of the central and southeastern United States, according to Animal Diversity Web.

Six-lined racerunners are opportunistic eaters, feasting on what's available as they forage for food, but they mainly eat insects along with arthropods and mollusks, Animal Diversity Web reports. Common food items for these lizards include ants, beetle larva and spiders. Adults eat a lot of grasshoppers, while the young lizards prefer cicadas. These lizards use their tongues to find food, flicking them over and over to find and assess potential prey through chemical signals they receive.

Like many animals, six-lined racerunners are hunted by other animals, including some mammals, birds, snakes and other lizards, according to the Missouri Department of Conservation. Because they primarily eat insects, they can help control the populations of certain species in habitats where they reside.