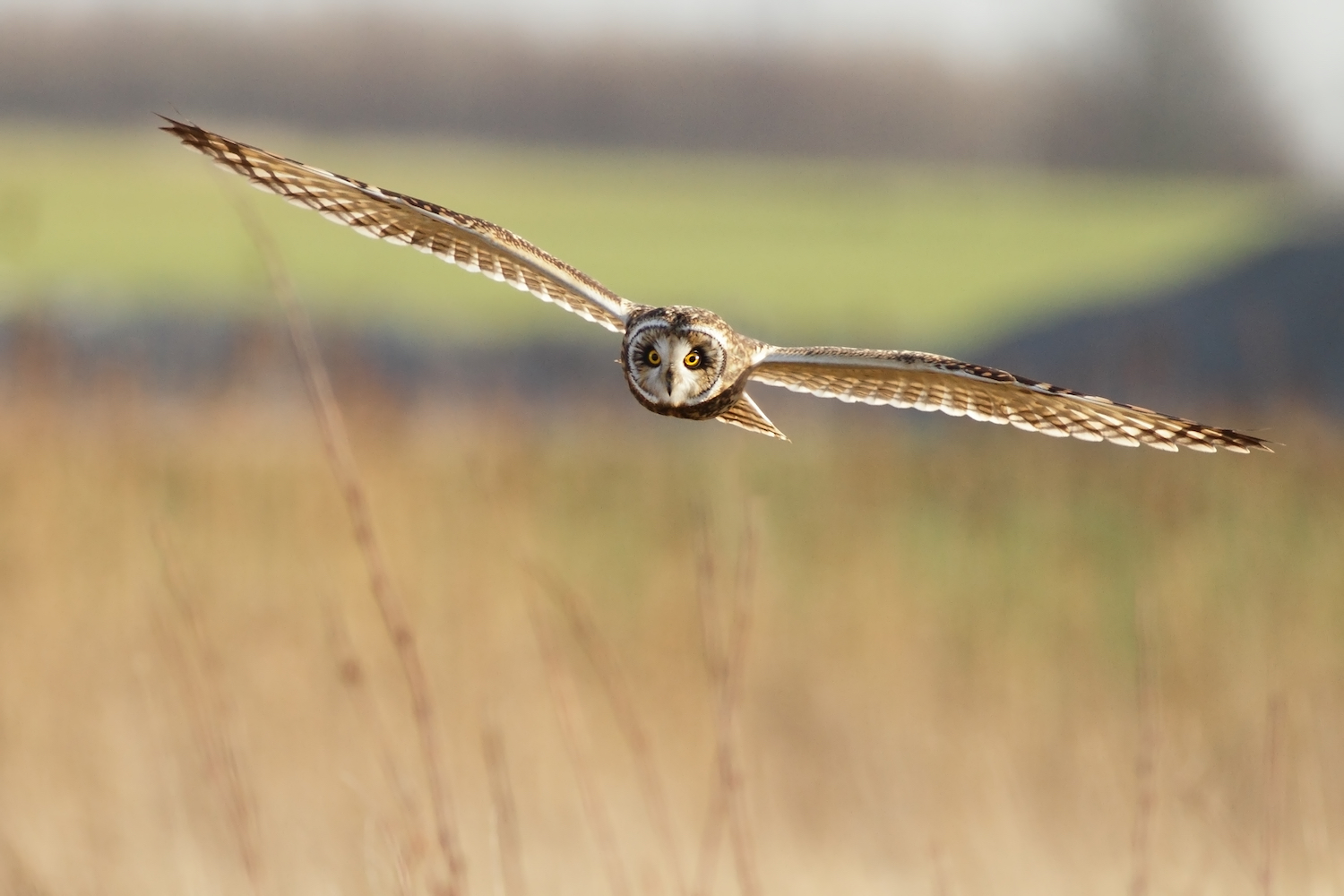 Owls are celebrated by many for a variety of reasons: their elusive nature, the thrill of their hooting calls and a round-faced appearance that many are drawn to for its uniqueness among birds.

Short-eared owls, one of the eight owls found in Will County, stand in contrast to some of the other owl species we have here because their behaviors are different than that of other owls. Short-eared owls, for example, aren't mysterious creatures of the night. Instead, they are crepuscular, most active at dusk and dawn, the National Park Service reports.

And while these owls do hoot, particularly males during courtship, they aren't usually very vocal, outside of barking or screaming when protecting their nests and nestlings, according to the Cornell Lab of Ornithology.

Short-eared owls are endangered in Illinois and are listed as endangered or threatened in most of the Great Lakes states. Their populations have suffered across the Great Lakes region because of the loss of their habitat, primarily open marshland and grassland, Animal Diversity Web reports.

These owls are named for their ears, which aren't really ears at all. Short-eared owls have small tufts over their eyes, but they are so small they are difficult to see, according to the Cornell Lab of Ornithology. These tufts are common among owls, and many owls' common names are related to their tufts. Great horned owls, for example, have ear tufts that look like horns. And long-eared owls, the closest relative of short-eared owls, have much larger and prominent ear tufts, giving rise to their common name.

Other names for the short-eared owl include grass owl, marsh owl and prairie owl, the National Park Service reports. All three of these nicknames are a nod to their preferred habitat, which is different than that of most other owls.

Short-eared owls are considered medium-sized owls, smaller than the great horned owl but larger than the eastern screech owl. Females are slightly larger than males, typically standing about 15 inches tall, while males are about 14 1/2 inches tall, according to the Owl Research Institute. Females usually weigh between 10 ounces and 17 ounces, and males weigh between 7 ounces and 16 ounces. Their wingspans range from between 33 inches and 40 inches.

These owls have large, dark heads with flat, lighter-colored faces, according to the Illinois Department of Natural Resources. They are mostly brown, with streaking on their breasts. They have yellow eyes and black beaks. Males and females can be differentiated in flight because the males have white or buff underparts while the females have rust-colored or tawny underparts.

Short-eared owls are one of the most widespread owl species in the world, living on every continent except Australia and Antarctica, the Owl Research Institute reports. They live all across the continental United States as well as Alaska, Canada and parts of Mexico. In many areas, they are migratory, with their breeding grounds in the northern reaches of the U.S. and all of Canada and their wintering grounds in much of the United States and northern Mexico. Northern Illinois is part of a narrow band of the United States that includes the Great Lakes region and parts of the upper plains and Pacific Northwest where short-eared owls are year-round residents and populations do not migrate.

Unlike most owls, which prefer wooded areas, these owls typically live in and around open areas, Animal Diversity Web reports. They prefer to live near marshes and bogs. Because of their hunting habits, they favor flat, grassy areas that support sizable rodent populations. They also nest on the ground, creating a bowl-shaped cavity that they line with feathers and grasses.

Like most owls, short-eared owls are carnivorous, and their food of choice is small rodents like voles and mice, Cornell Lab reports. They also eat larger rodents and mammals, including shrews, rabbits, pocket gophers, bats, rats, weasels and muskrats, as well as birds.

Short-eared owls are an important part of the ecosystem because they help control the populations of many animals, particularly rodents, considered nuisances by humans, according to Animal Diversity Web. In some areas, rodent populations reach levels where the plague becomes a concern. Short-eared owls will often move into these territories because of the plentiful food supply.