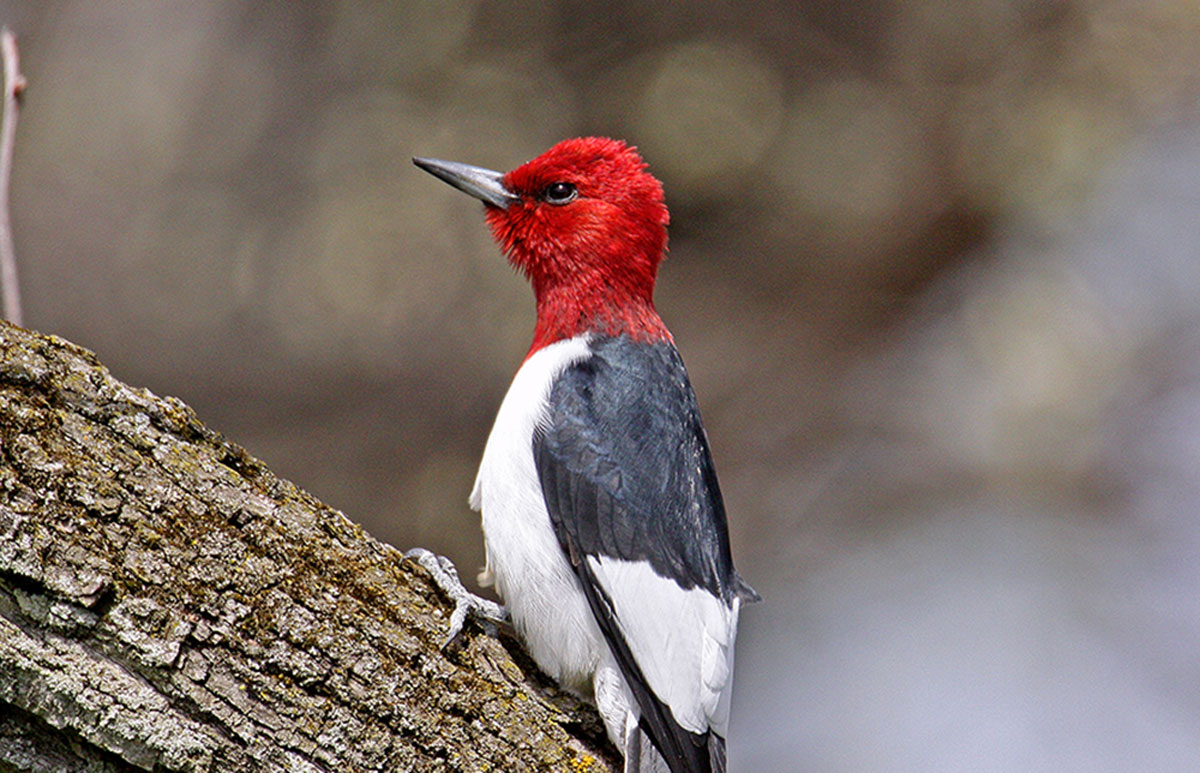 The sound of a woodpecker pecking can be both intriguing and infuriating. This rhythmic pecking, called drumming, is an easy way to know woodpeckers are nearby, but the noise can sometimes, quite simply, be an annoyance.

Red-headed woodpeckers are one of seven woodpeckers that live in Illinois. And like all woodpeckers, they peck into dead wood, forming cavities for nesting and shelter and looking for food. This pecking ability is also helpful for mating, with males drumming on wooden and metal surfaces to both attract females and mark their territory, the University of Illinois Extention reports.

Red-headed woodpeckers are one of the few bird species in which the males and females are nearly impossible to distinguish in the field because they are virtually identical, according to the Cornell Lab of Ornithology Birds of North America.

The red-headed woodpecker was once common in the eastern United States, but its population has been declining for many years, the Audubon Society reports. Reasons for the decline are not fully known, but likely include loss of nesting sites and competiton for nesting sites.

Here's a closer look at this bird.

Quite obviously, the red-headed woodpecker gets its name from its physical appearance. However, only the adult birds have the bright crimson heads for which they are known, according to the Cornell Lab. Young red-headed woodpeckers aren't red at all. Instead, they have brown heads which don't turn fully red until they are about 2 years old.

Red-headed woodpeckers are easily recognizable by their appearance: bright red head, all-white belly and black wings with large white patches that appear like a wide, white stripe along their backs. Among woodpeckers, they are a medium-sized species. For comparison's sake, they are larger than a robin but smaller than a crow, according to the Cornell Lab.

These woodpeckers stand between 7 1/2 and 9 inches tall and have a wingspan of about 16 1/2 inches. Males and females are the same size, in addition to having identical apperances.

Red-headed woodpeckers live throughout much of the eastern and central United States, but are not found in the West. They prefer open land such as groves, orchards or farmland and generally avoid heavy forests, according to the Audubon Society.

These birds nest in cavities, often in dead tree trunks or limbs, the Cornell Lab reports. They can build their own cavities, but also use existing ones. They are known to defend their territory, destroying nests or removing eggs from nests of birds.

In northern Illinois and much of the eastern United States, red-headed woodpeckers are seen all year. Some stay in their habitat all year, while others migrate for winter, but only short distances, according to the Audubon Society.

Fossils of red-headed woodpeckers dating back 2 million years — to the Pleistocene age — have been found in Illinois, Florida and Virginia, the Cornell Lab reports.

Red-headed woodpeckers are true omnivores and are the most omnivorous of the woodpecker species, according to the Audubon Society. They eat a variety of spiders and insects, which they can catch in the air, and on ocassion eggs and small rodents. They also eat seeds, nuts, berries, fruit and tree bark.

In the winter, these birds are known to sometimes visit bird feeders, including suet feeders, the Cornell Lab reports. They are one of four North American woodpecker species to store their food and the only species known to hide their food under wood and bark. They even sometimes hide insects like grasshoppers while they are still alive, but pack them so tightly into cracks and crevices in wood that they can't escape. 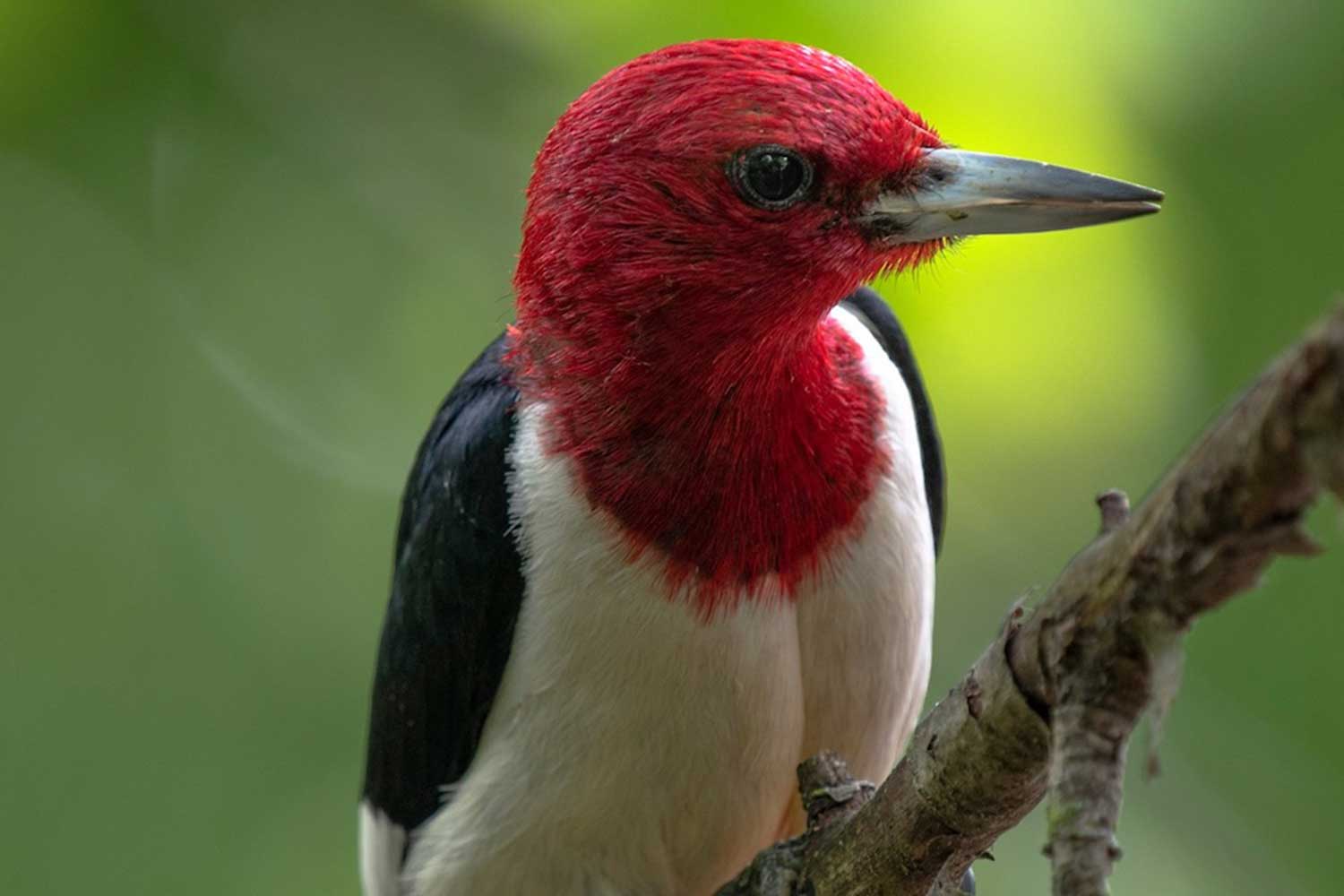 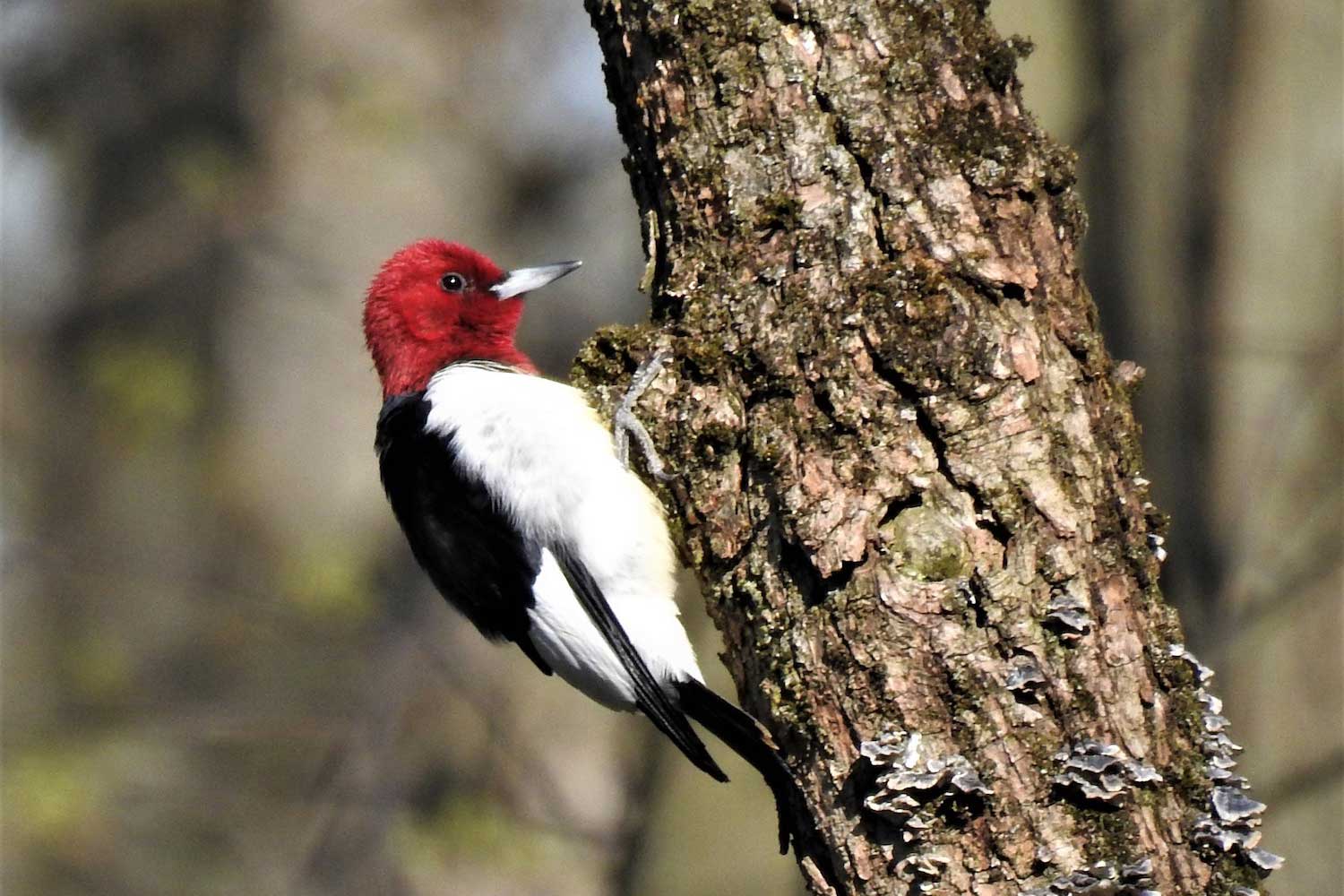 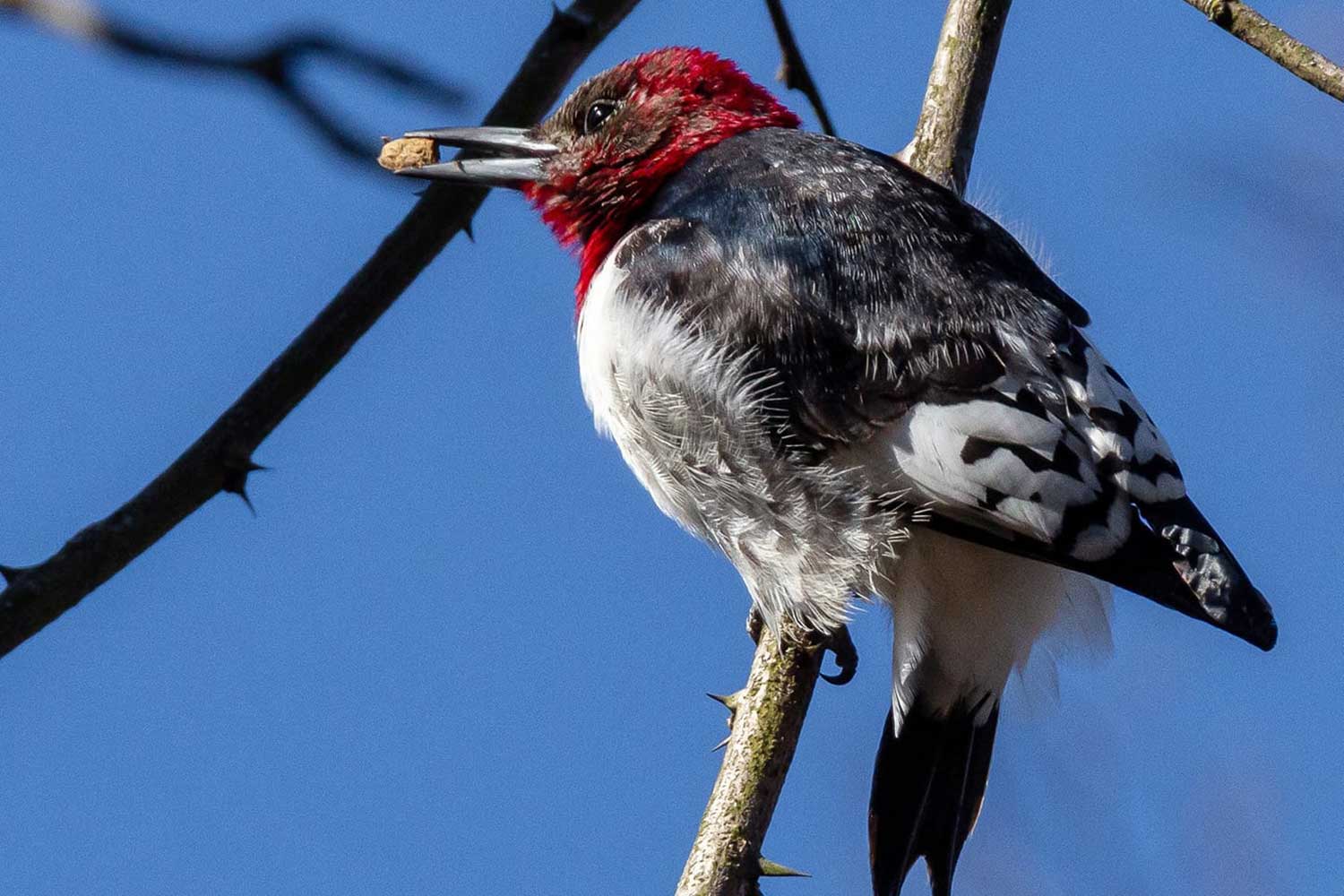 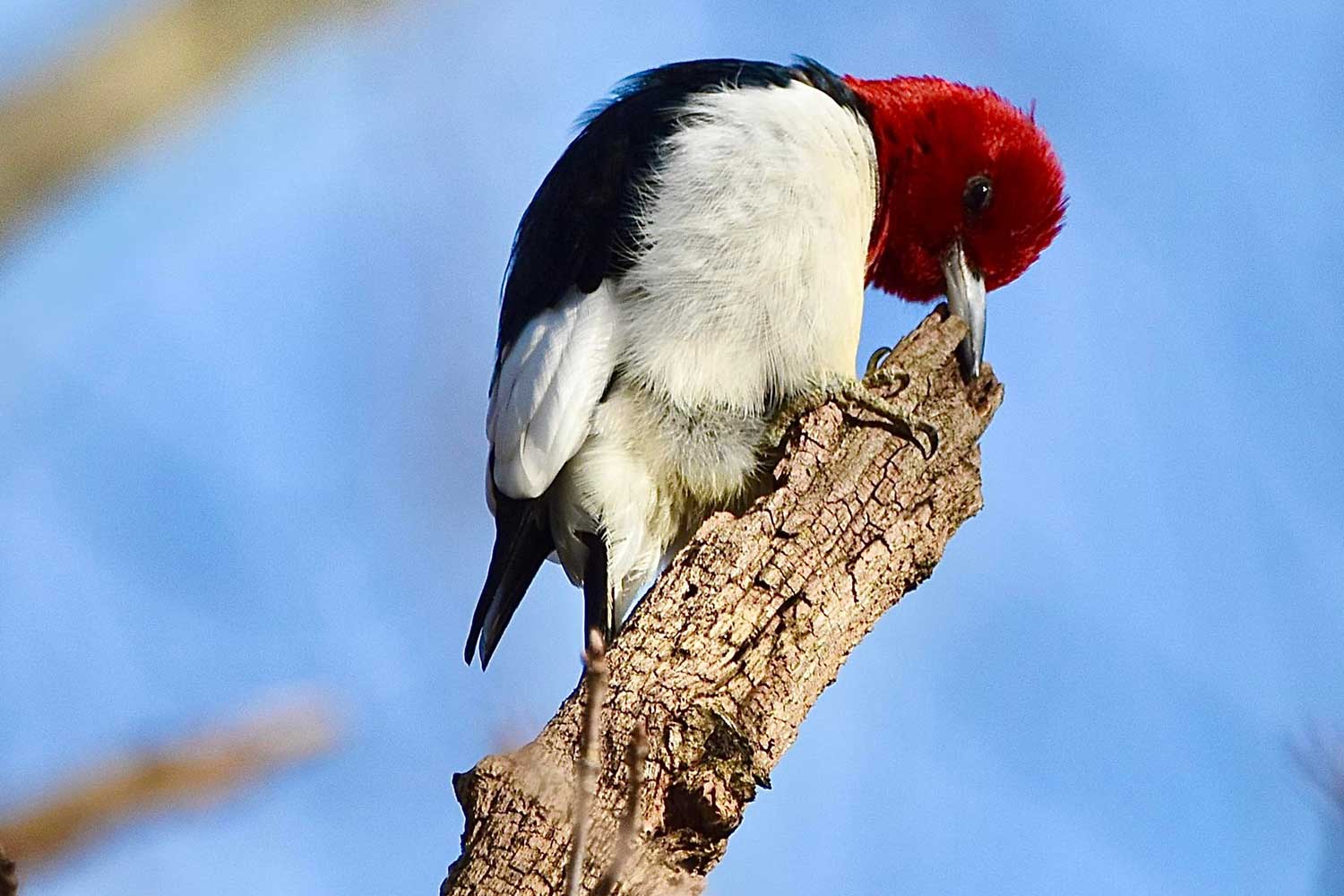 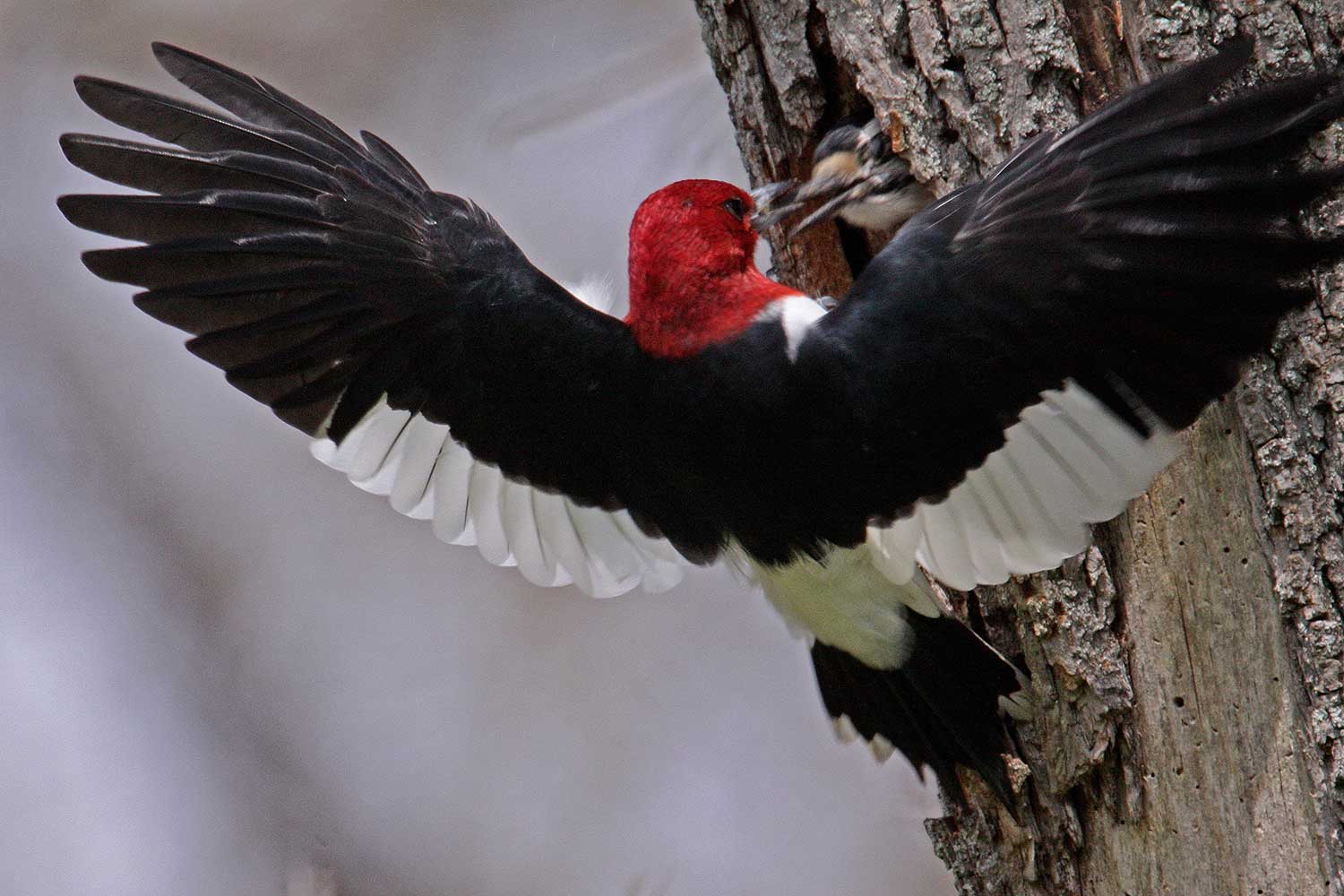 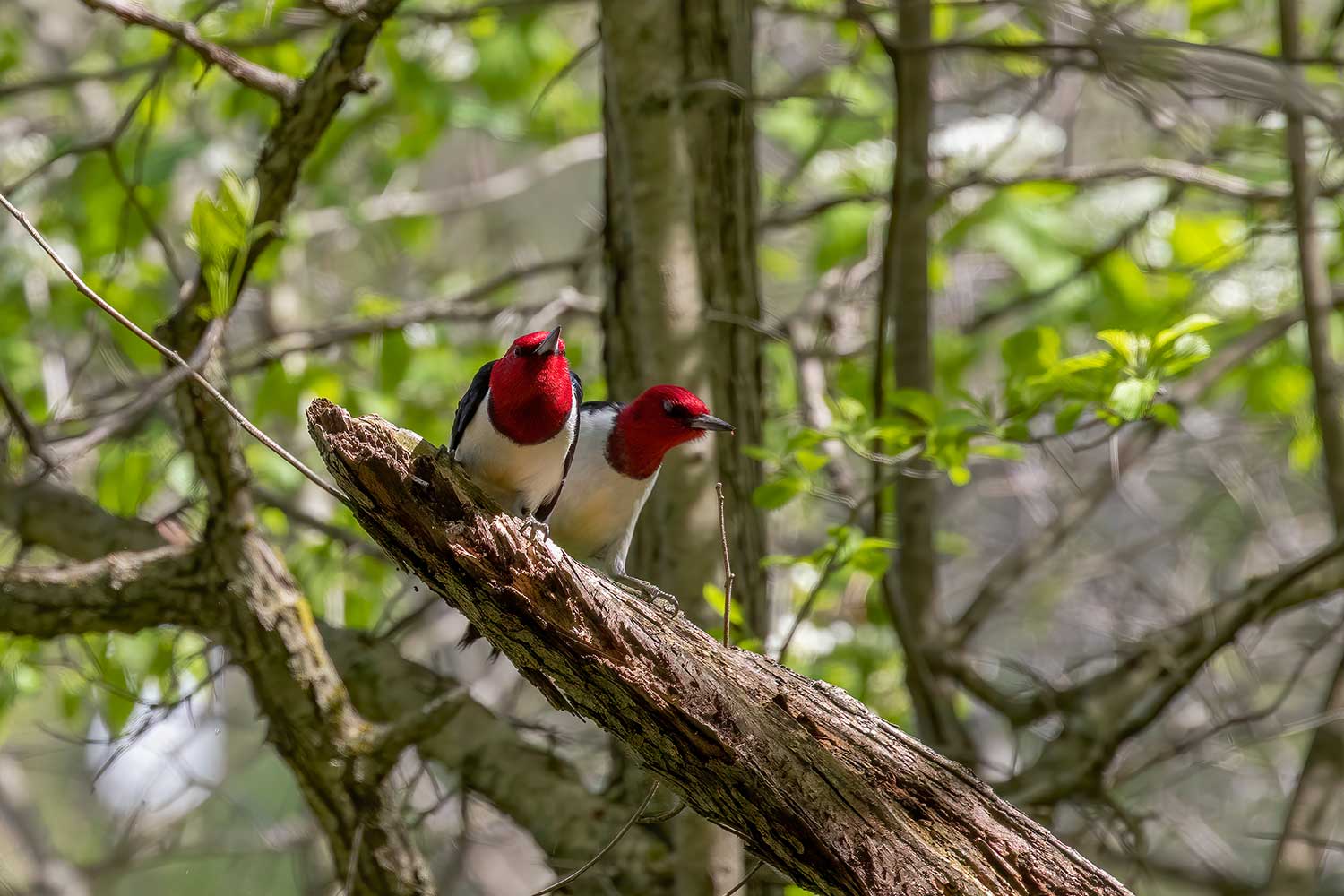 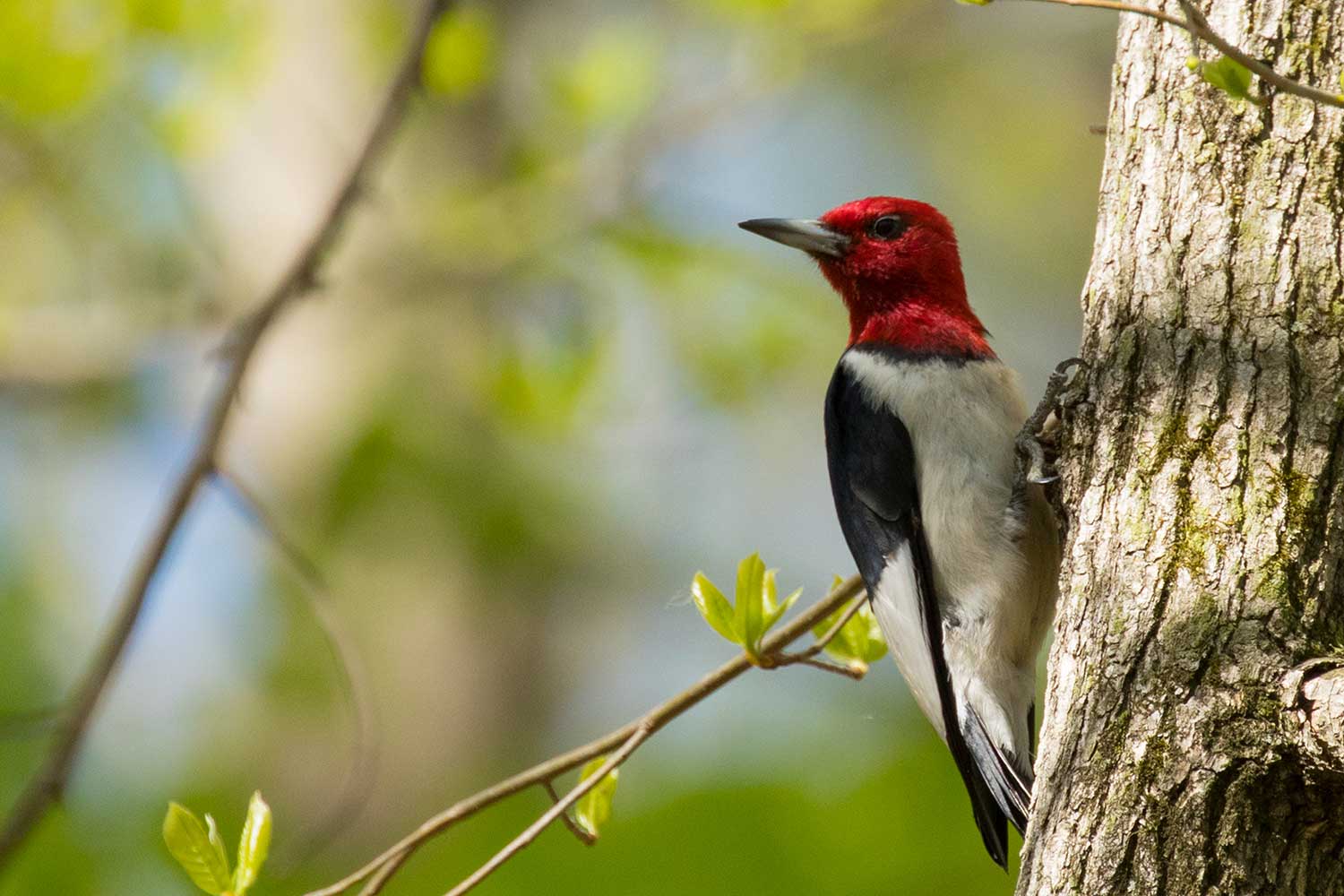