Snakes in the water? Don't worry; they're not after you 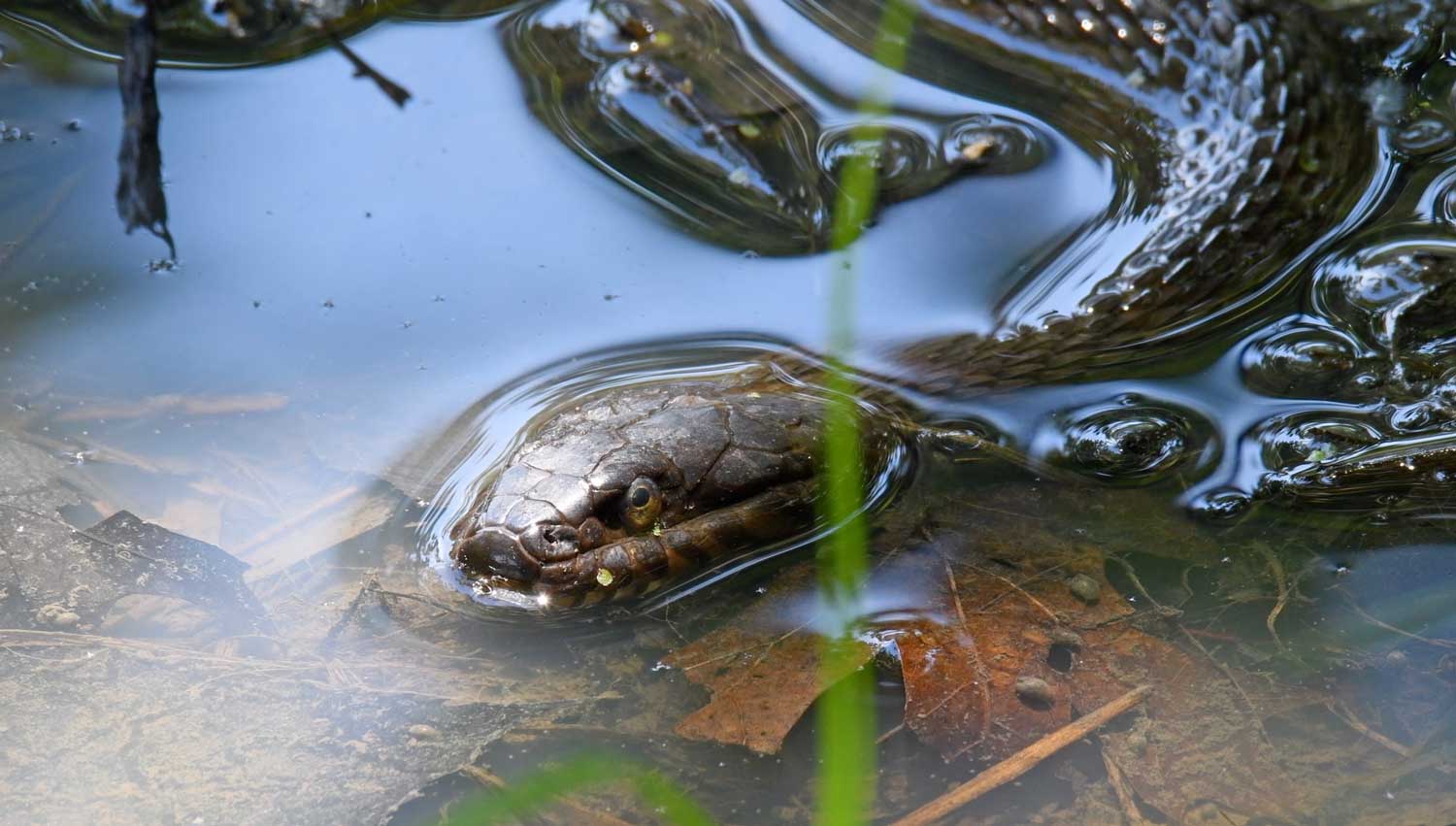 A northern water snake hanging out in the water. (Photo by Chad Merda)

The idea of a water snake gives many people pause, but northern water snakes are a common snake in Illinois, and they cause people no harm.

Despite rumors and misinformation to the contrary, northern water snakes are not venomous. However, they are often mistaken for venomous copperhead or cottonmouth snakes because of their appearance, according to the National Wildlife Federation. While not dangerous to humans, northern water snakes will flatten their bodies and bite when they are disturbed or agitated, but their bite is not poisonous.

In the spring and fall, these snakes are most active during the day, according to the Illinois Department of Natural Resources. During the summer, they are nocturnal. They can be found in a variety of aquatic habitats in Illinois.

Northern water snakes are named for their habitat and geographic range. They are also sometimes referred to as common water snakes or banded water snakes, according to the Missouri Department of Conservation.

These snakes are one of several water snakes that live in Illinois, but it is one of the most common, according to the Illinois Department of Natural Resources. A similar species, the midland water snake, is actually a subspecies of the northern water snake. The two species interbreed, creating snakes that show traits of both species.

The northern water snake is a medium-sized snake, generally between 2 feet and 4 feet long, and females are usually larger than males. These snakes are dark-colored, ranging from brown to reddish-brown to gray, and their bellies are cream-colored or yellow, the Missouri Department of Conservation reports. They have distinct bands, or stripes on their backs, that can be black, gray, dark brown or reddish-brown in color. These bands taper into blotches further away from their heads.

As their name suggests, northern water snakes live in aquatic habitats, including rivers, streams, lakes, ponds and marshes. They prefer open areas where they can bask in the sun, and they mostly seek out bodies of water that are mostly still, according to the University of Michigan.

These snakes do not stay in water exclusively, although they are never too far from an aquatic environment. They often bask in the sun on rocks and branches near water or over water.

Northern water snakes are scavengers, eating animals both dead and alive, according to the University of Michigan. Their diet primarily consists of aquatic animals, including fish, frogs and tadpoles, turtles, leeches, crayfish and large insects, but they also eat birds, small mammals such as mice and even other snakes.

These water snakes are not constrictors, like boas and pythons. Instead, they swallow their prey while it is alive. Northern water snakes have been known to herd fish and tadpoles to the edges of the water, where they can easily eat them one at a time.

Like most animals, they play an important role in keeping nature in check.