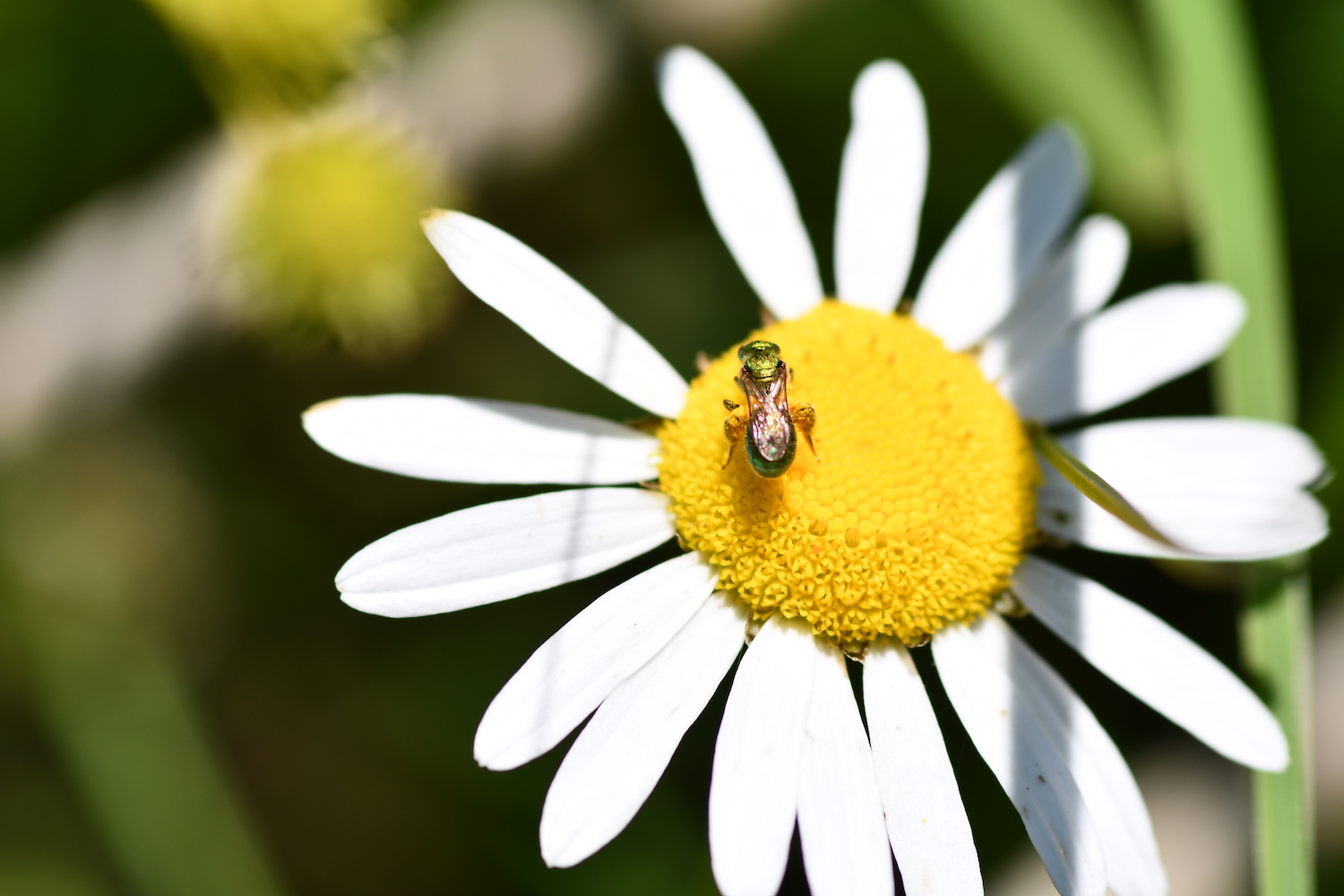 A sweat bee on a flower. (Photo by Glenn P. Knoblock)

When it comes to stinging insects, sweat bees are perhaps the least imposing of all, due to their small size and non-aggressive nature.

Sweat bees are capable of stinging, but because they aren't aggressive, stings usually only happen if they are swatted at or you make accidental contact with them, according to the Maryland Department of Natural Resources. And their stings are more mild than that of other bees and stinging insects, not causing such severe pain and irritation.

They are called sweat bees for the reason you would probably expect: They are attracted to our perspiration, which they drink, the Maryland Department of Natural Resources reports. Their proclivity for landing on us to drink our sweat is why most people are familiar with sweat bees, but what we call sweat bees are not actually just one species of bee.

Sweat bees, also called halictid bees, are actually a large group of bees, with more than 500 species in North America, according to the Missouri Department of Conservation. Sweat bees are slender and small, typically between one-quarter and three-quarters of an inch long. Many lack the trademark yellow-and-black markings of bees like honeybees and many bumblebees. Instead, sweat bees have a variable appearance depending on the particular species. They can be metallic or non-metallic, and most are black or brown, but they can have markings in red, yellow or green. Sometimes the marking are bands like those seen on honeybees.

Like other bees, sweat bees do important work as pollinators, particularly for many different kinds of wildflowers and crops, including alfalfa, apples, stone fruits and sunflowers, the Maryland Department of Natural Resources reports.

Halictid bees are among the smallest bees that are able to engage in buzz pollination, the Missouri conservation department reports. Buzz pollination occurs when a bee grabs the anther (the part of the plant responsible for producing and dispersing pollen) from a flower, curls its abdomen around the anther and uses its wing muscles to cause vibration, in turn causing the anther to release its pollen. Honeybees are not capable of buzz pollination, so many plants are reliant on native bees like sweat bees, bumble bees, carpenter bees, mason bees and leafcutting bees.

Because sweat bees don't always look like other bees we are familiar with, they are sometimes confused with an insect that does: the hover fly. Many hover flies, which are similar in size to sweat bees, feature the black and yellow bands we recognize from honeybees and other bees, but they aren't bees at all, according to the Purdue Extension.

Further adding to the confusion is that hover flies, which are also called flower flies or syrphid flies, also frequently visit flowers for nectar and pollen, according to the University of Wisconsin Horticulture Division of Extension. These flies are excellent aviators, much better than bees. They are able to hover over a flower until just the right moment before dropping down for a quick meal.

If you can get a good look at the insect, one easy way to tell the difference between a hover fly and a sweat bee or an insect capable of stinging is the old adage "two wings fun, four wings run." Like all flies, hover flies have just two wings, while bees and other stinging insects have four.

Like sweat bees and many other insects, hover flies are also important pollinators, according to the University of Illinois Extension. In addition, in their larvae form they are an important predator of common garden pests such as aphids.