Nature curiosity: When does a bird need help? 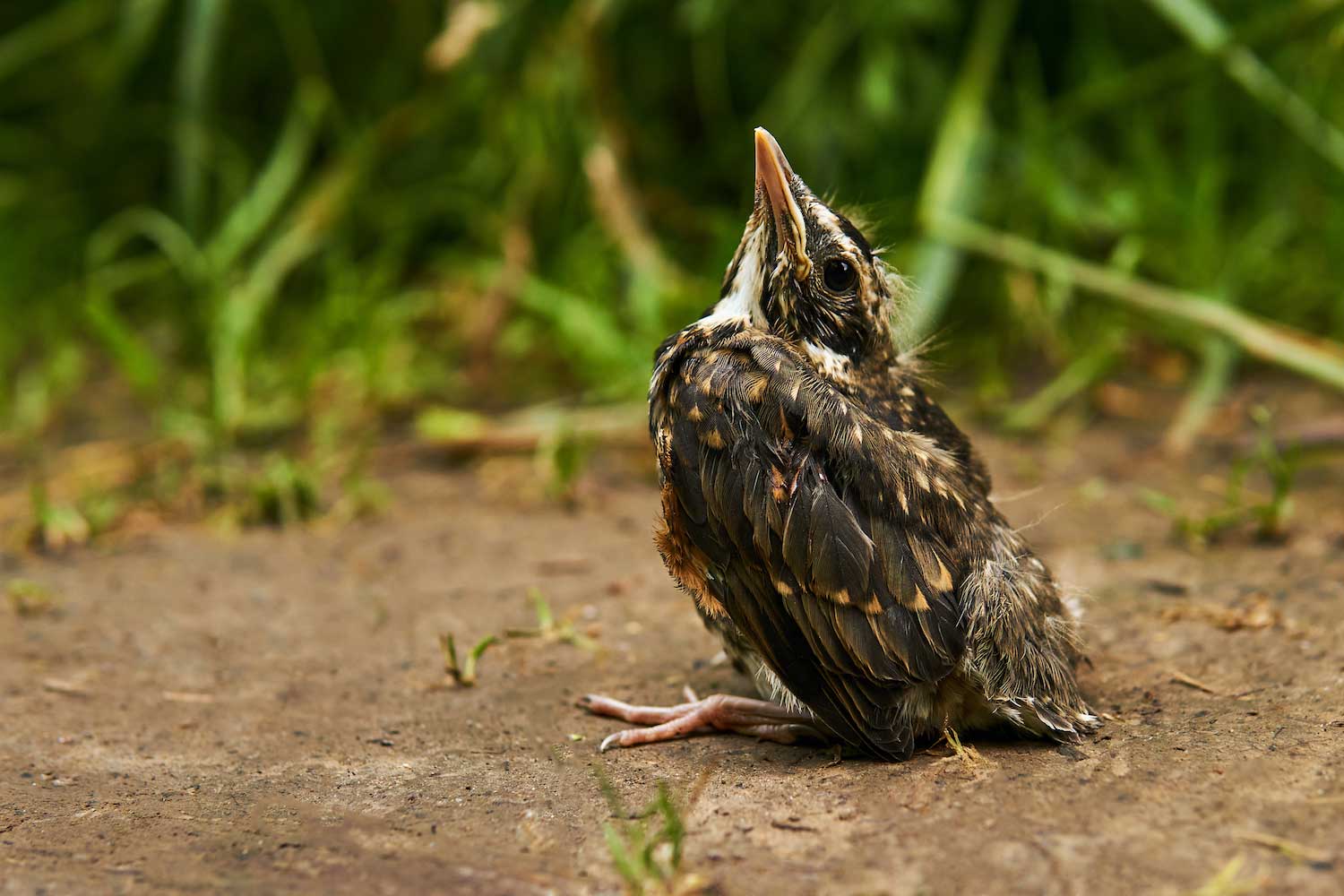 It’s a question that comes up often: I found a bird that might be injured, so what should I do? The answer depends on many factors, including the age and type of bird, but in many cases the best course of action is contacting a licensed wildlife rehabilitator who can help the animal.

In many cases, it’s young birds that people come across and are worried for their well-being. For these young birds, whether to intervene depends on just how young the bird is.

Very young birds, called nestlings, need intervention if they are found outside of their nests. These birds can’t yet fly and require regular care from their parents, according to the Cornell Lab of Ornithology. How can you tell if a baby bird is a nestling? They typically have very few feathers, and they are unable to walk or grip your finger tightly.

Nestlings sometimes fall out of their nests, so there’s a good chance if you find one its nest is nearby. Look around to see if you can find it, and if you do, gently scoop up the nestling and place it in its nest. And don’t worry; there’s no truth to the rumor that mother birds will abandon their babies if they’ve been touched by humans, according to the National Audubon Society.

MYTH BUSTER: MOTHER BIRDS WON’T REJECT THEIR BABIES IF YOU TOUCH THEM

Most commonly, the young birds people find on the ground are fledglings, not nestlings. These birds are a few weeks older than nestlings and are busy learning how to be a bird, so it’s normal to encounter them on the ground, the Audubon Society reports.

The first sign that the bird is a fledging will be the presence of feathers. Fledglings will also be able to hop around on the ground and may flap their wings, but they can’t quite fly just yet, according to the Audubon Society.

Even though they seem all alone, fledglings don’t need your help. They have left the nest as a normal part of their development, and their parents may be nearby keeping a watchful eye on them, according to the Cornell Lab. In most cases, if you try to return a fledgling to its nest, it will simply hop out again because it has moved past the nesting stage of its development.

More rarely, you may come across a fledgling on the ground that is hurt or sick, and these birds may need intervention. Signs of this include wet feathers; the presence of flies, which could be a sign of an open wound; and an inability to walk or hop on the ground.

For adult birds, injuries are often apparent. For example, a bird with a drooping wing needs help, as do birds that cannot stand or look lame while trying to walk on the ground, according to the Tufts Wildlife Clinic. A bird is also likely injured if it doesn’t fly away when you approach.

A bird that’s sick or hurt may also sit quietly with its eyes closed, and in many cases they may fluff their feathers so they look puffier than usual, although this is normal in winter, according to Wildlife Illinois. They may also have difficulty breathing or have trouble keeping their heads erect. For waterfowl like ducks and geese, they may not be able to swim properly.

A common cause of injury in birds is window strikes. These incidents kill hundreds of millions of birds each year, but many can survive these impacts. When they do, though, they may be stunned, causing them to appear injured or even dead, according to the National Audubon Society.

If you encounter a bird that you think may have flown into a window, check its status by very gently moving its legs, the Audubon Society advises. Rigor sets in very quickly in birds, within minutes of death, so if its legs don’t move, it’s dead. If the legs do move, it’s alive, although it may be unconscious.

If you find a bird that displays signs of being sick or injured, be it a young bird or an adult, contact a local wildlife rehabilitator, Wildlife Illinois advises. You can find a list of rehabilitators who have permits from the Illinois Department of Natural Resources online.

In the meantime, if you can safely move the bird to a safe place, put it in a box with a lid, but make sure to add some holes to the lid. When picking it up, move slowly and gently, approaching from behind if possible, to avoid startling it. Place the container in a dark, quiet place — a garage would work well.

If the bird was injured in a window strike, after about 15 minutes, try bringing the box outside and removing the lid to see if it will fly off, the Cornell Lab of Ornithology advises. If it doesn’t, bring it back to the dark, quiet place and allow it to rest longer. Continue trying to release it every so often. If it hasn’t recovered enough to fly away after a few hours, contact a licensed wildlife rehabilitator.

When handling birds, make sure to always wear gloves, the Tufts Wildlife Clinic advises. You can also try to use a net to keep the bird from trying to leave the area. Do not give the bird any food or water, because this can make it sick or kill it. Do not handle the bird, and make sure to keep pets and children away from it. Remember that contact with humans or other animals will be very stressful for the bird, which is already ailing.

If it is cold, try to warm it by placing the box on a heating pad covered by a blanket, the clinic advises. You can also wrap warm water bottle in a towel and place it in the box, making sure it cannot roll on the bird.

If you find an injured raptor, including hawks, eagle and owls, or wading bird, like herons and egrets, do not attempt to handle or catch the bird because it could injure you, Wildlife Illinois advises. Instead, contact a wildlife rehabilitator that is trained to handle and care for the bird.

And remember that it is illegal to handle a migratory bird without a permit. When you come across an injured bird, do not intervene in any other way than to transport it to a licensed rehabilitator, the Cornell Lab advises.