Nature curiosity: How do birds survive with broken beaks? 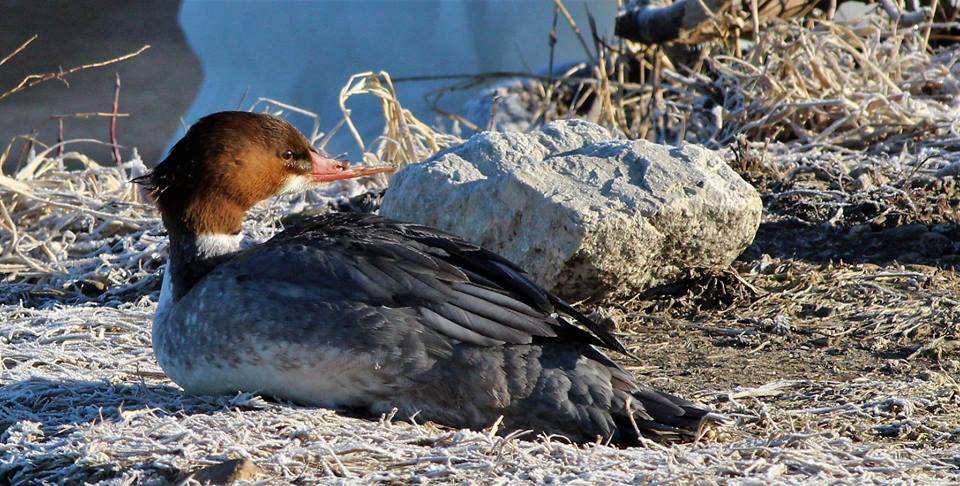 A female common merganser with a broken beak. (Photo courtesy of Kathy Bobal)

A bird's beak is one of its most important features, used for eating, drinking, hunting and even, in some species, attracting mates or warning off potential predators or competitors.

Beaks and bills come in many shapes and sizes, often influenced by a bird's diet or behaviors. Seed-eating birds, for example, have short, pointed beaks that help them crack open seeds. Birds that catch and kill their prey, including hawks, eagles and owls, often have a hook-shaped bill. Birds that dive into the water to catch fish, like pelicans and some other waterfowl, have long, slender bills they can use for scooping.

Beak injuries are common among birds, according to the National Aviary. But for birds in the wild, a broken or chipped beak can be a matter of life or death, especially if the injury affects the way a bird hunts or eats.

In the wild, beak injuries are often caused by trauma, possibly from a collision with a window, being hit by a car or even falling from a nest, said Molly Craig, director of animal care at the Fox Valley Wildlife Center in Elburn.

Injuries from building collisions are more common in our area during the peak migration times in the spring and fall, said Dr. Laura Meals, a veterinarian for the Willowbrook Wildlife Center in Glen Ellyn.

"(Building collisions are) common in young birds who are doing their first migration and those that have underlying illness or who are debilitated," Meals said.

Beak abnormalities can also occur from attacks by other wildlife or as the result of metabolic and genetic diseases and birth defects.

For example, birds can suffer from a condition called scissorbeak, which is a misalignment of the top and bottom beaks, Craig said, adding this is one of the beak conditions they see most often. Scissorbeak can develop because of an injury, but it can also be genetic.

Whether a bird can survive a beak injury depends on several factors. First, the severity of the injury is key.

"Depending on the nature of the injury, it can sometimes self-correct," Craig said, giving the example of a misaligned beak caused by swelling, which often resolves on its own.

A fractured beak, however, can be much more serious. Some of the cases Craig has seen have been easily treated, but others not so much. Whether the birds can ever be released into the wild varies from case to case.

"In the case of a fractured beak, viability for release depends heavily on the location of the break," she said. "A break near the tip of the beak can often be corrected with some trimming and time. In more severe cases, we may coordinate with one of our veterinarians to adhere the beak back together."

A general rule of thumb for beak injuries is that the closer the break is to the tip of the beak, the better the chance it will heal, Meals said.

In many cases, wildlife rehabbers and veterinarians are able to make splints — often with everyday items like paper clips, cotton swabs and tongue depressors — to bridge the fractured segments of a bird's beak, Meals said.

Because birds' beaks are rich in nerves and blood vessels, working with a veterinarian is often required to properly treat the injury, Craig said.

Of course, not all birds that suffer beak injuries make it to an animal rehab facility for treatment. In these cases, the birds will either learn how to survive with the broken beak or, if that's not possible, succumb to the injury.

Craig said the Fox Valley Wildlife Center takes in thousands of animals every year, but only a couple of these cases involve beak injuries. When these types of injuries occur, one of the key considerations is whether the birds will be able to feed themselves.

"In particularly severe cases where the beak cannot be corrected, we assess their ability to self-feed with the injury," she said. "This will be much more difficult for a seed-eating bird as compared to a bird with a softer diet based on plants or insects."

Birds that are able to feed themselves after an injury are candidates for being released into the wild, Craig said. In some cases, however, a bird may require regular maintenance after its injury even though it is able to feed itself.

"Two of our resident songbirds, a rose-breasted grosbeak and an American robin, both have beak deformities that require monthly trimming but are able to self-feed without issue," she said.

At the Willowbrook Wildlife Center, Meals said she often will assess an injured bird over a period of several weeks to monitor their progress and determine whether it can safely be released back into the wild.

"During this time, I will watch them eat and monitor their weight," she said. "If they are successful, I will move them into a larger space that simulates their natural environment. If they continue to thrive, I will release them back into the wild."

In more severe cases, where the bird will not be able to feed itself because of the injury, Craig said they would likely opt to humanely euthanize it.

If you find a bird with a broken beak, Craig said she suggests contacting a wildlife rehabilitation facility as soon as possible for treatment and to alleviate any suffering. Both the Fox Valley Wildlife Center and the Willowbrook Wildlife Center accept injured wildlife from the suburban area.