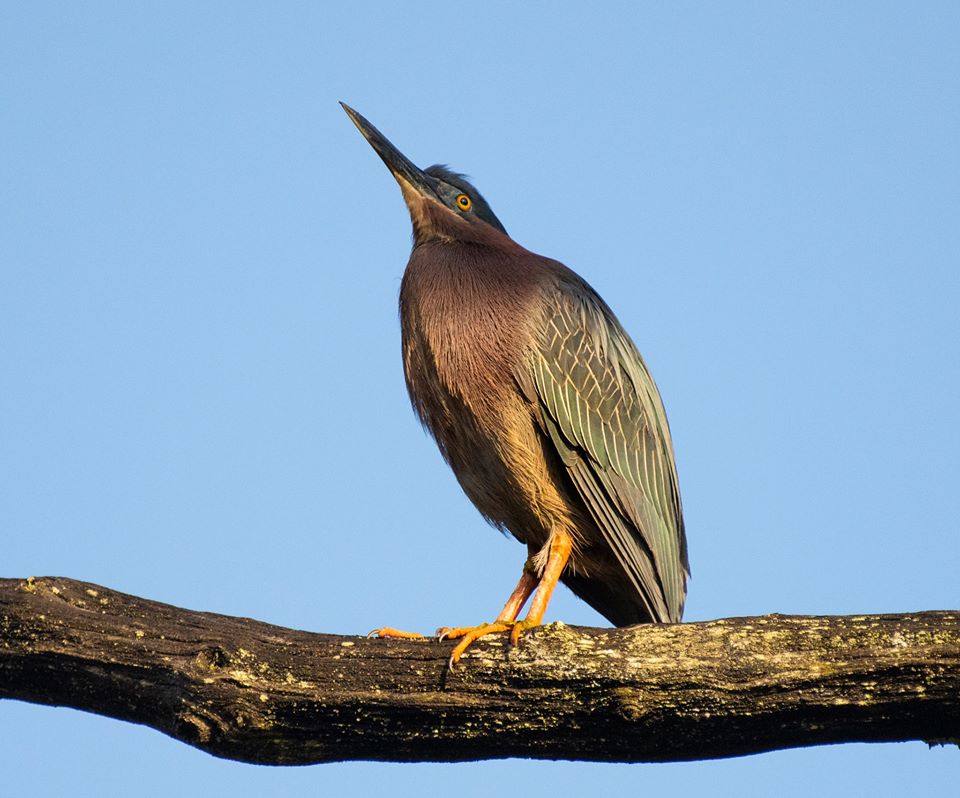 A green heron. (Photo courtesy of Sandra Rust via Will County Wildlife)

Green herons aren't as widely seen — or celebrated — as the stately great blue heron, but they are among the herons that populate the waterways of Illinois. These birds are common, although not as easily visible as some birds because of their mostly dark plumage and their preferred habitat.

Green herons are unique among avians because they are one of a few birds in the world known to use tools, according to the Cornell Lab of Ornithology. They do this by creating lures from objects they find, such as feathers or bread crumbs, to catch fish.

The green heron is named for its color, although its green plumage isn't always readily apparent, according to the National Audubon Society. The birds have green feathers on their backs, but they are iridescent so they can look black or dark blue unless seen up close or in the right light.

By heron standards, green herons are small with stocky builds, about the same size as a crow. Because of their hollow bones, they only weigh about a half-pound. They have short, orange or orangish-yellow legs, according to the Cornell Lab. They have dark crown feathers that are sometimes displayed as a crest, and their bills are long and sharp.

At a distance, green herons don't look green at all, but seen from up close, their backs reveal dark green feathers. Their wings are gray, and they have chestnut or brown breasts. Their necks have white streaks or stripes.

Green herons live near water, but they prefer water surrounded by forests or stands of trees. They are a common sight along lakes, ponds, swamps and marshes, Cornell Lab reports. They nest in trees near the water, sometimes in branches that hang over the water. They live near both fresh water sources and salt water, so they are also common along coastal inlands and estuaries.

These birds live across much of the United States as well as parts of Mexico and Canada. While common along both the Pacific and Atlantic coasts, green herons are not typically found in western states that aren't along the coast, according to Cornell Lab. Most of the green herons in the United States are migratory. The birds that live in the middle of the country migrate both east to Florida and the Gulf Coast and west to Mexico and Central America.

Green herons predominantly eat fish, particularly small fish like minnows and sunfish. In urban areas, they will even eat goldfish from people's ponds, according to the University of Michigan Animal Diversity Web. While fish are their main staple, they have a varied diet. They also eat a variety of insects, aquatic invertebrates and even snakes, lizards, frogs, toads and rodents.

They hunt for food at all hours of the day, typically by standing at the water's edge and stalking their prey. They will stand in one spot for a long time before moving on. Less often, they hunt while slowly walking along the edge of the water or by diving down from a perched position. Because they have large, heavy bills, they are able to catch large prey relative to their size.

Greens herons are an important part of the ecosystems and food chains where they live because they are predators of many species of small fish and aquatic invertebrates, the Animal Diversity Web reports, which helps to keep their populations in check. They are not commonly preyed upon, although some larger birds of prey will hunt green herons. Their eggs and nestlings are also sometimes hunted by snakes, raccoons and some birds.