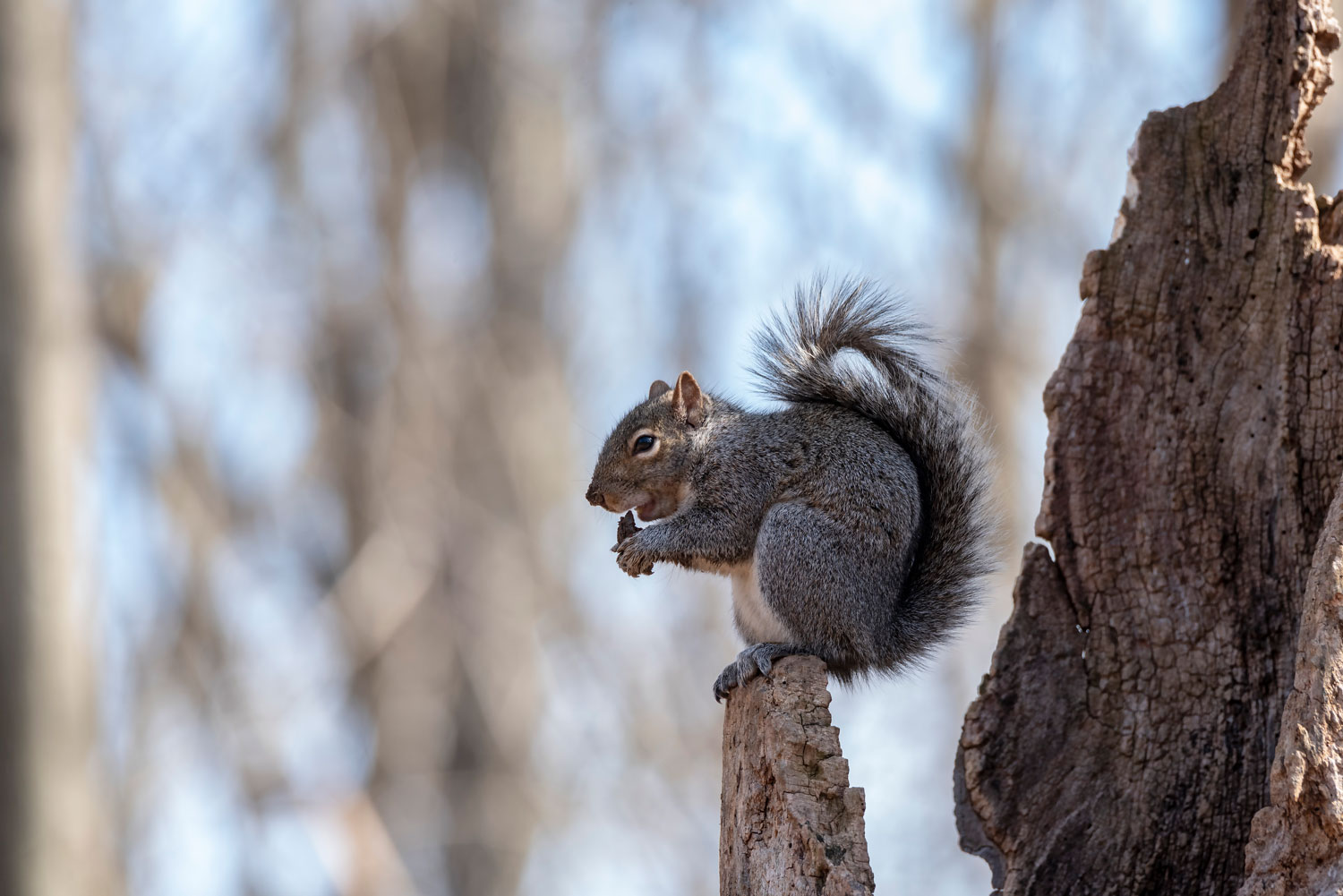 An eastern gray squirrel perched on a tree. (Photo by Chris Cheng)

With winter fully upon us, your yard and the local parks and outdoor areas may seem a little quieter and emptier than they were a few months ago. But one animal that hasn't migrated south or tucked itself away for winter is the eastern gray squirrel.

These squirrels and the others that live in Will County don't hibernate, so they are a common sight all year, according to Wildlife Illinois. They may stay in their nests on the coldest or snowy days, but they won't stay hidden away too long.

Squirrels are agile, as evidenced by their ability to quickly scurry up and down trees and even across power lines. They can run at speeds of up to 20 mph, and quickness is important because it is one of their few defenses against predators.

Learn more about these squirrelly critters below.

Eastern gray squirrels are named for their geographic range as well as their physical appearance. They live primarily in the eastern United States and Canada, although their range does extend just west of the Mississippi River, according to the University of Michigan's Animal Diversity Web. Their fur is almost entirely gray or grayish-brown except for white fur on their underbellies, around their eyes and the tips of the backs of their ears.

The word squirrel itself is Greek in origin, having been derived from the word "skiouros," according to Merriam-Webster. In Greek, "skia" means "shadow" and "oura" means tail. The term squirrel was spelled in a variety of ways for many years, but the common spelling we use today has been the accepted spelling since the 17th century.

They have long, bushy tails that can be between 6 inches to 10 inches long, more than a third of their total body length. And like all rodents, a squirrel's top two and bottom two teeth are always growing, according to National Geographic. Their constant gnawing on nuts and other foods helps keep them from becoming too large.

Eastern gray squirrels live across Illinois and the eastern United States and Canada. They prefer woods and forested areas, especially those with an understory rife with vegetation, according to Animal Diversity Web.

Their populations are highest in woods and forests with trees such as oaks and walnuts that produce nuts that last through the winter months. However, these squirrels are also a common sight in cities, even in urban areas that do not have a high density of the trees they prefer, according to the Illinois Department of Natural Resources.

Squirrels often nest in the cavities of trees, but they also build nests, called dreys, in tree branches. They use sticks, twigs, dry leaves and grasses to build their dreys.

Eastern gray squirrels are known for their love of nuts, but their diet is much more varied than that. In addition to nuts, they also feast on the buds, leaves, fruits and berries from a variety of trees, including oak, hickory, pecan, walnut and beech trees, according to Animal Diversity Web. They also eat fungi and herbaceous plants, and in agricultural areas, crops such as corn and wheat are an important part of their diet, especially in winter. In the summer, they often eat insects, particularly juvenile squirrels, and they've also been known to eat bones, bird eggs and frogs.

Nuts are the most well-known of their food sources because squirrels horde nuts, burying them in holes in the ground. But while they're good at hiding the nuts, they aren't as good at finding them, or at least remembering where they buried them. Studies have shown that squirrels fail to dig up 74 percent of the nuts they bury. That may be bad news for them, but it's good news for us, as those forgotten nuts often sprout new trees.

Gray squirrels and other squirrels play an important role in their habitat because their seed- and nut-storing behavior leads to new tree and plant growth from some of the foods left buried, according to Animal Diversity Web. These plants, in turn, then provide food and shelter for squirrels and other animals.

Squirrels are also an important food source for a variety of mammals and birds, including coyotes, foxes, red-tailed hawks and owls. In addition, they help control the population of animals they eat.