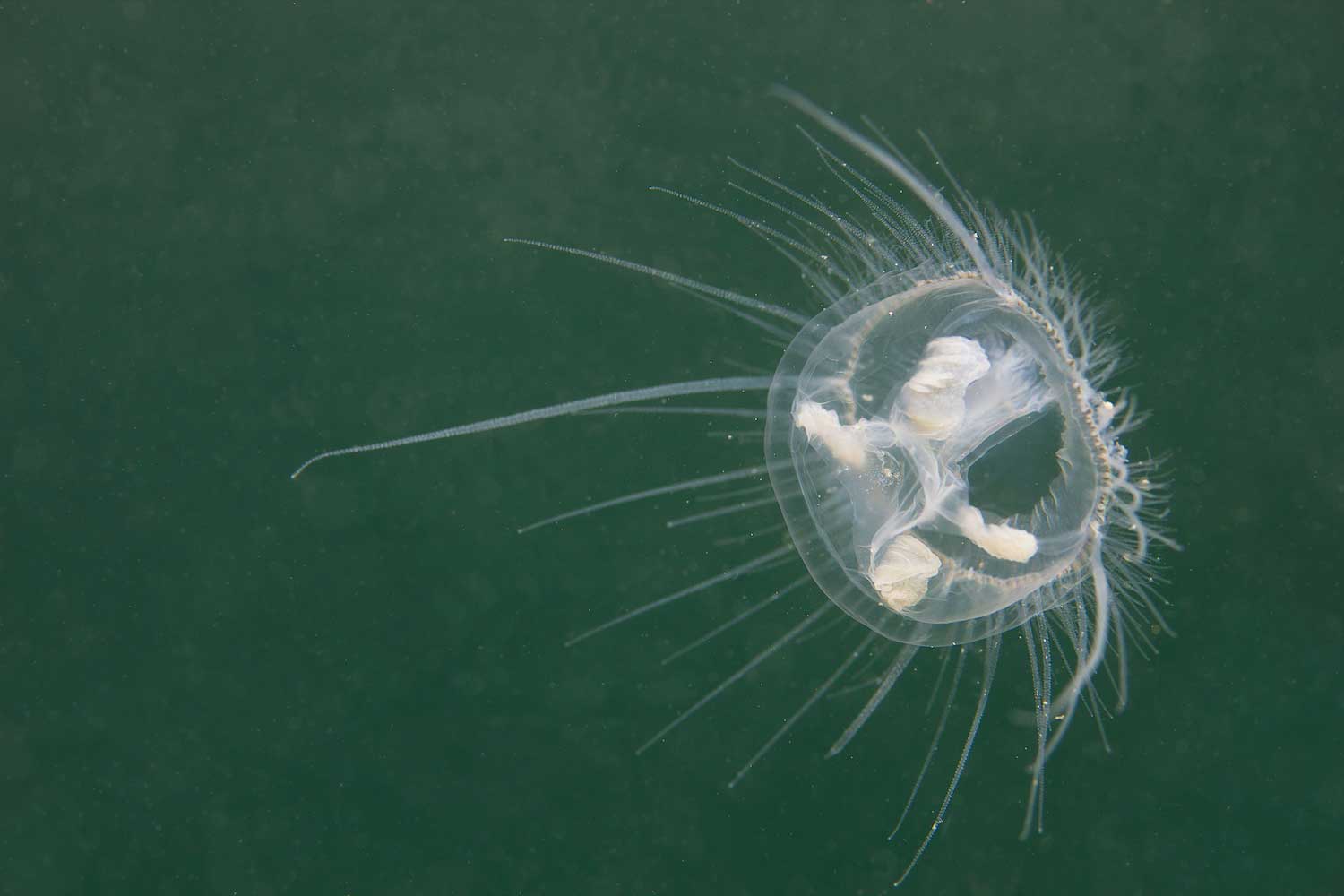 A freshwater jellyfish. (Photo via Shutterstock)

Jellyfish in Illinois? Freshwater jellyfish do exist, and they are sometimes found in the lakes and ponds in Illinois and beyond, although they aren't a common sight.

Only one species of freshwater jellyfish lives in the United States, Craspedacusta sowerbyi, or the peach blossom fish. These jellies are native to the Yangtze River valley in China, but today are found across much of the world, according to the Illinois Department of Natural Resources.

Now that you know there might be jellyfish in our local waterways, your first question is probably whether they can sting. They do have stinging cells that they use to catch the tiny zooplankton they eat, but there haven't been any reports of humans being stung by them, according to the Indiana Department of Natural Resources. They pose no risk to humans because of their small size.

These jellyfish are little, only about the size of a penny. They are typically transparent, although they may sometimes appear to be tinged with colors like green, blue, gray, tan or white, according to the Missouri Department of Conservation. At times, they also may appear to have four opaque spots within their bodies. These are the gonads used for reproduction.

When you think of jellyfish, long, dangling tentacles probably come to mind. Freshwater jellies do have tentacles, as many as 500 lining the edge of their umbrella-shaped bodies, but most are very short. They do have four longer tentacles, however, equidistant from one another on the outer edge of their bodies, according to the U.S. Geological Survey.

Freshwater jellyfish prefer still water without a current, so they are most common in ponds, lakes, quarries and backwaters, and they also are most prevalent in good, clean water, Ordinary reports. If the water source dries up, they can go dormant until the environment is wet again.

The jellyfish go through a three-part life cycle. They start as eggs, which then become tiny polyps. The tiny polyps attach themselves to hard surfaces, often forming colonies, according to the Pennsylvania Sea Grant. Because the juvenile polyps are so small, they aren't usually even noticeable. In their adult phase, called medusas, freshwater jellyfish resemble the jellies we think of in our oceans, although much smaller. (They're only about the size of a penny, remember.)

The jellyfish remain in the polyp stage for long periods, only forming into the adult medusas when conditions are suitable, the sea grant reports. When conditions are unfavorable, such as when no food is available or the water is too cold, the polyps will form a mass called a resting body and remain in this state until conditions improve.

In Illinois, medusas are typically found floating around near the water's surface when water temperatures reach about 80 degrees Fahrenheit, IDNR reports. Because warm water is needed for the polyp to develop into a medusa, they are usually seen in August and September.

Although these jellyfish aren't native to the United States, their presence in the aquatic habitats where they are found does not appear to harm native species or the ecosystem, the Missouri Department of Conservation reports.