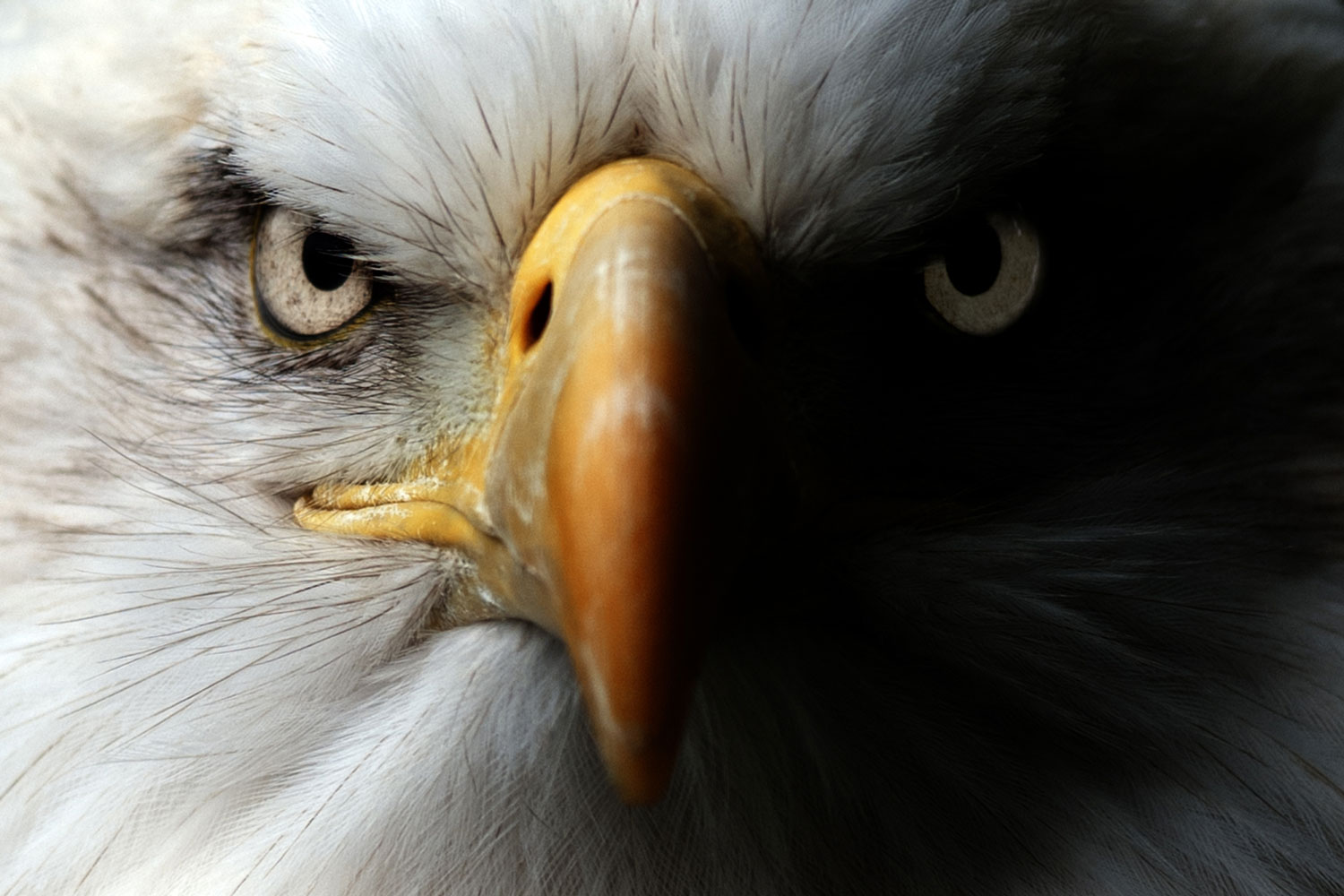 Bald eagles are one of America’s most majestic creatures, serving as the national emblem of the United States since 1782.

Once endangered, the bald eagle is now flourishing across the United States and was removed from the U.S. list of threatened and endangered species in 2007, according to the U.S. Fish and Wildlife Service.

Here’s some offbeat facts about bald eagles that you probably didn’t already know.

Bald eagles are one of the most iconic symbols of America, but that wouldn’t be the case if founding father Benjamin Franklin had his way, the Cornell Lab of Ornithology reports.

Franklin preferred a more morally sound choice such as the wild turkey. “For my own part, I wish the Bald Eagle had not been chosen the Representative of our Country. He is a bird of bad moral character. He does not get his living honestly,” Franklin wrote in 1784.

As Franklin eluded to in his writing, bald eagles are somewhat of a bully in the bird world. They sometimes steal fish and prey from other birds, including osprey, the Audubon Society reports. Mammals – including human fishermen – can also be victims of eagles, which will swoop in to steal a prized catch.

In addition, bald eagles are scavengers, feasting on carrion and even picking food from dumpsters or from the waste sites at fish-processing facilities.

Bald eagles really do have an eagle eye

Eagles have exceptional vision, thanks to a few special features. First, unlike humans, they have both monocular and binocular vision, so they can use their eyes independently or together, depending on what they are trying to see. They can also look ahead and to the side at the same time, according to the National Eagle Center.

Eagles see in color, and can view a greater range of color than humans. They can also see ultraviolet light, which aids in hunting because they can see the UV-absorbent urine of their prey.

And finally, eagles can also see with their eyes closed, so to speak. Bald eagles have two sets of eyelids, and one, called a nictitating membrane, is see through. These eyelids help with blinking and move horizontally across the eyes, keeping them moist and clean, the National Eagle Center reports.

Their calls are less-than-impressive

Bald eagles may be regal, majestic birds, but their calls don’t exactly match their stature and appearance. Instead, they have a weak call, mainly consisting of high-pitched whistling and piping sounds, according to the Cornell Lab.

LISTEN TO THEIR CALL

In fact, the bald eagle’s call is so unimpressive that movie editors have dubbed over it with a more impressive bird’s sounds, that of the red-tailed hawk, NPR reports.

The red-tailed hawk has a loud and piercing call, that seems more suited to the bald eagle, so movie editors have opted to match the sound to the physical image the bird projects.

They aren’t always so easy to identify

If you’re lucky enough to see a bald eagle perched atop a tree or another high structure, you probably won’t have any trouble identifying it by its “bald,” white head. In flight, however, these birds can be more difficult to distinguish from other raptors, including turkey vultures and hawks. The easiest way to identify a bald eagle in flight is by its wings, the Cornell Lab reports. While many raptors fly with their wings pointed down toward the ground, bald eagles extend them straight from their bodies, giving them a flat appearance in flight.

Immature bald eagles can also be difficult to identify, because they do not yet have the iconic white heads and white tail feathers of adults. Instead, they have dark heads and tails for about the first five years, with varying amounts of mottling until their adult plumage fully comes in. The immature eagles also have dark brown eyes that turn to a light yellow as they age. 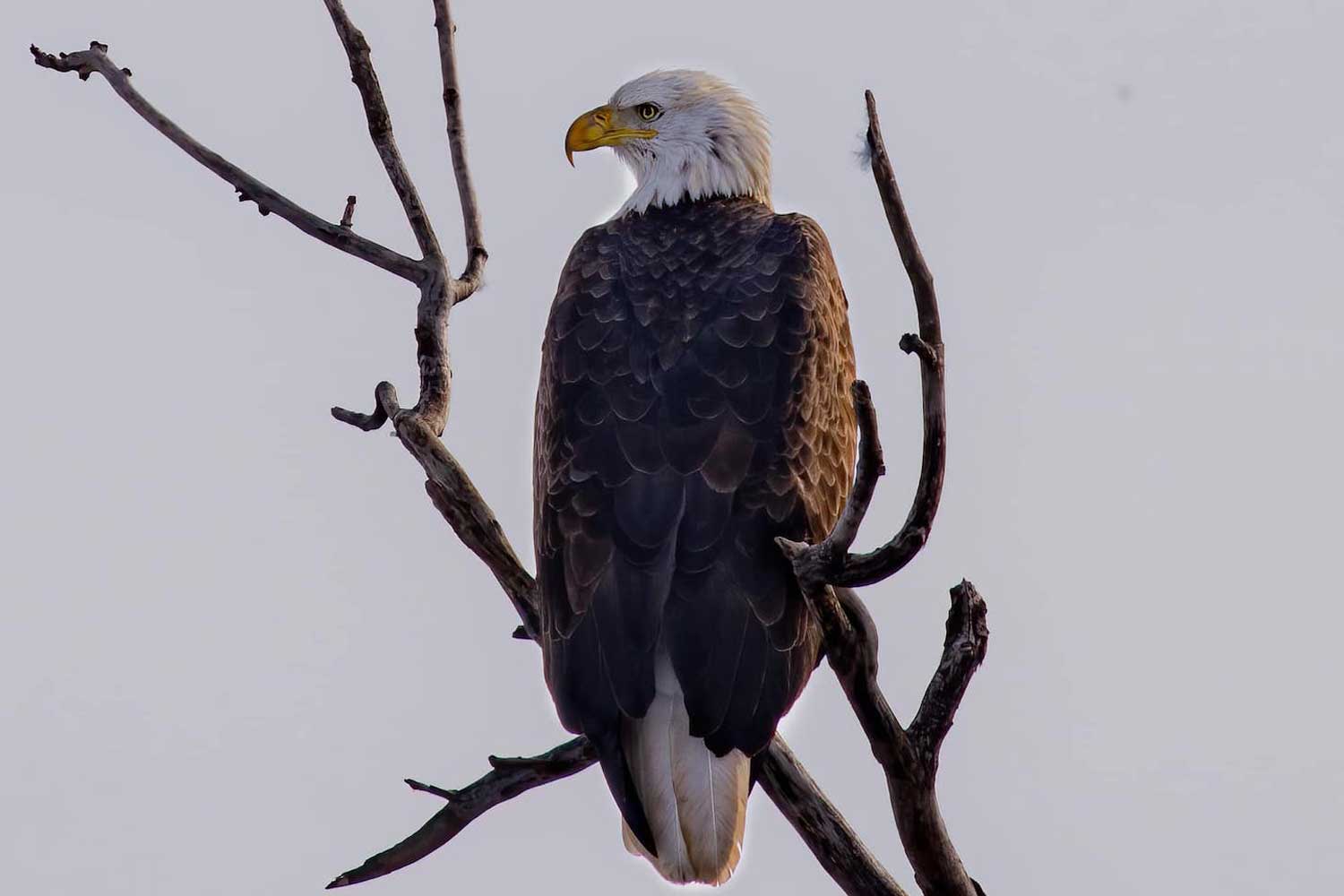 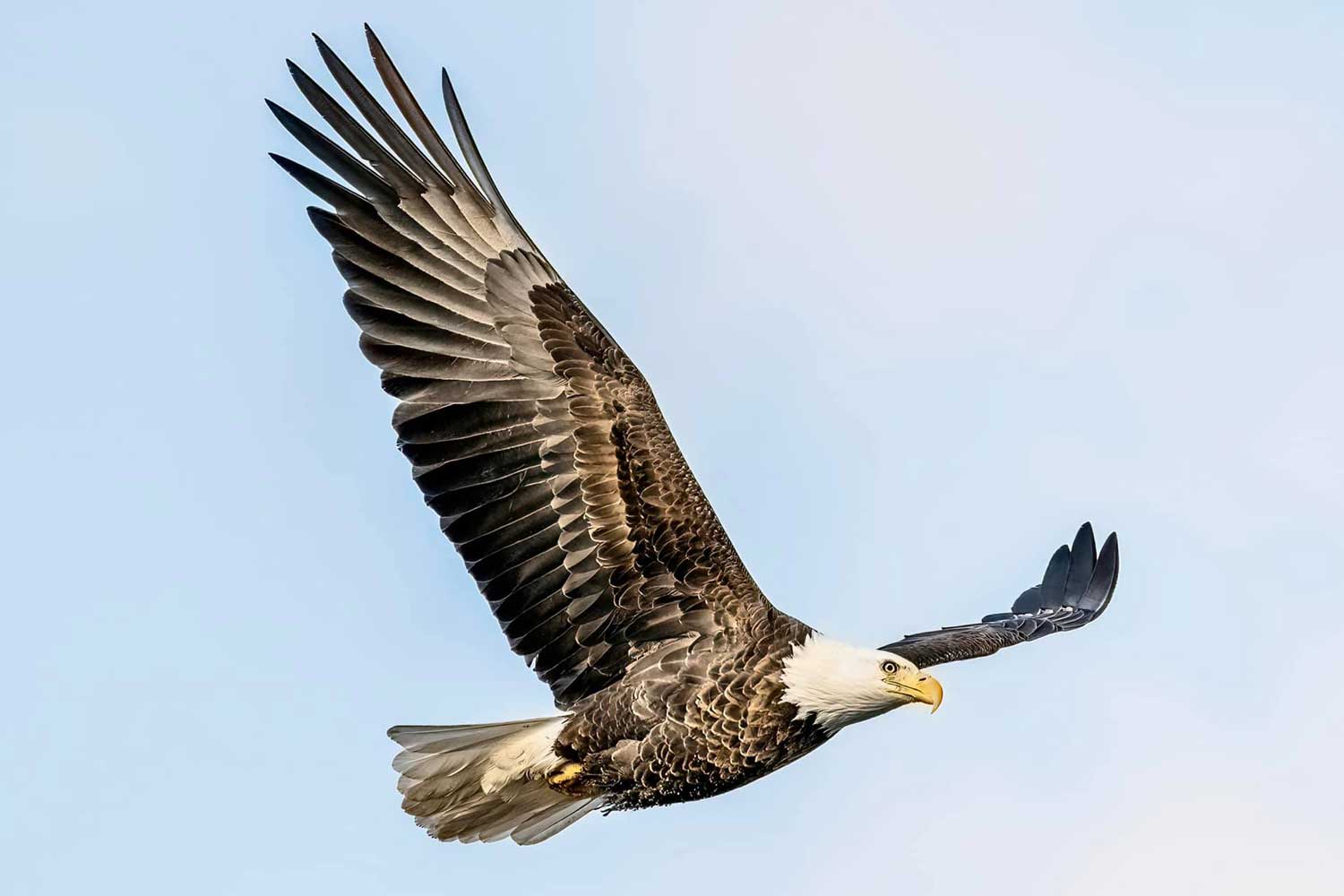 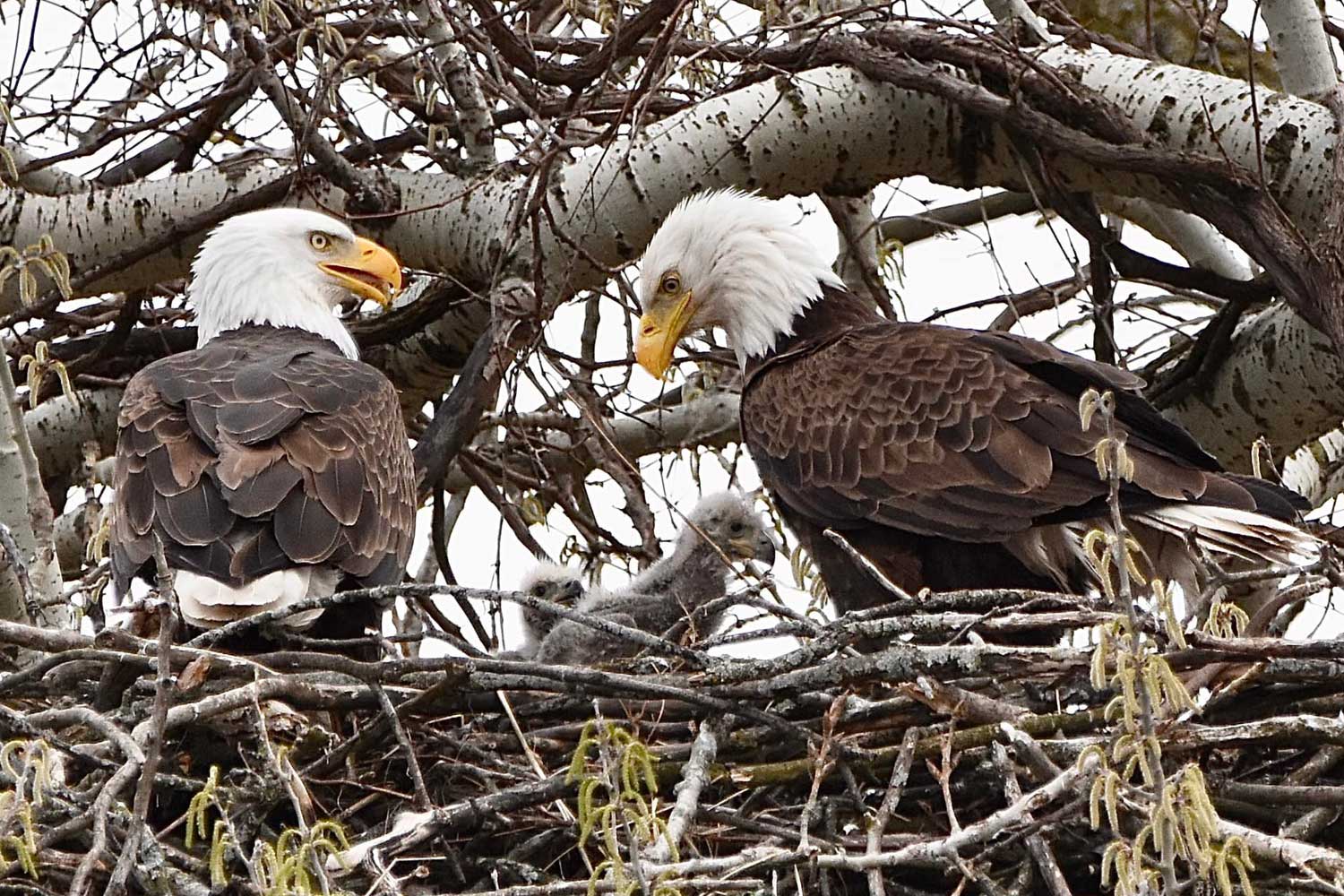 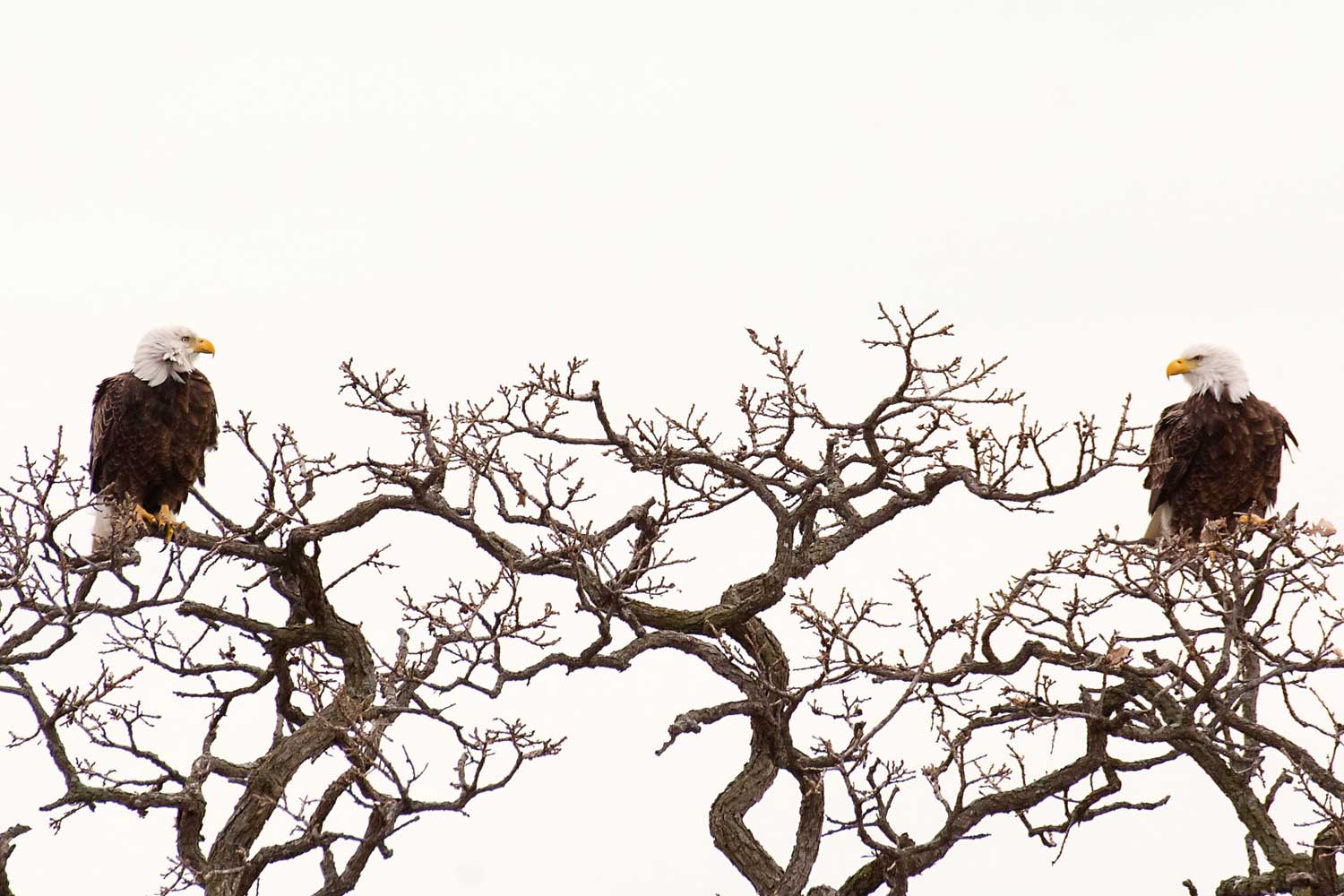 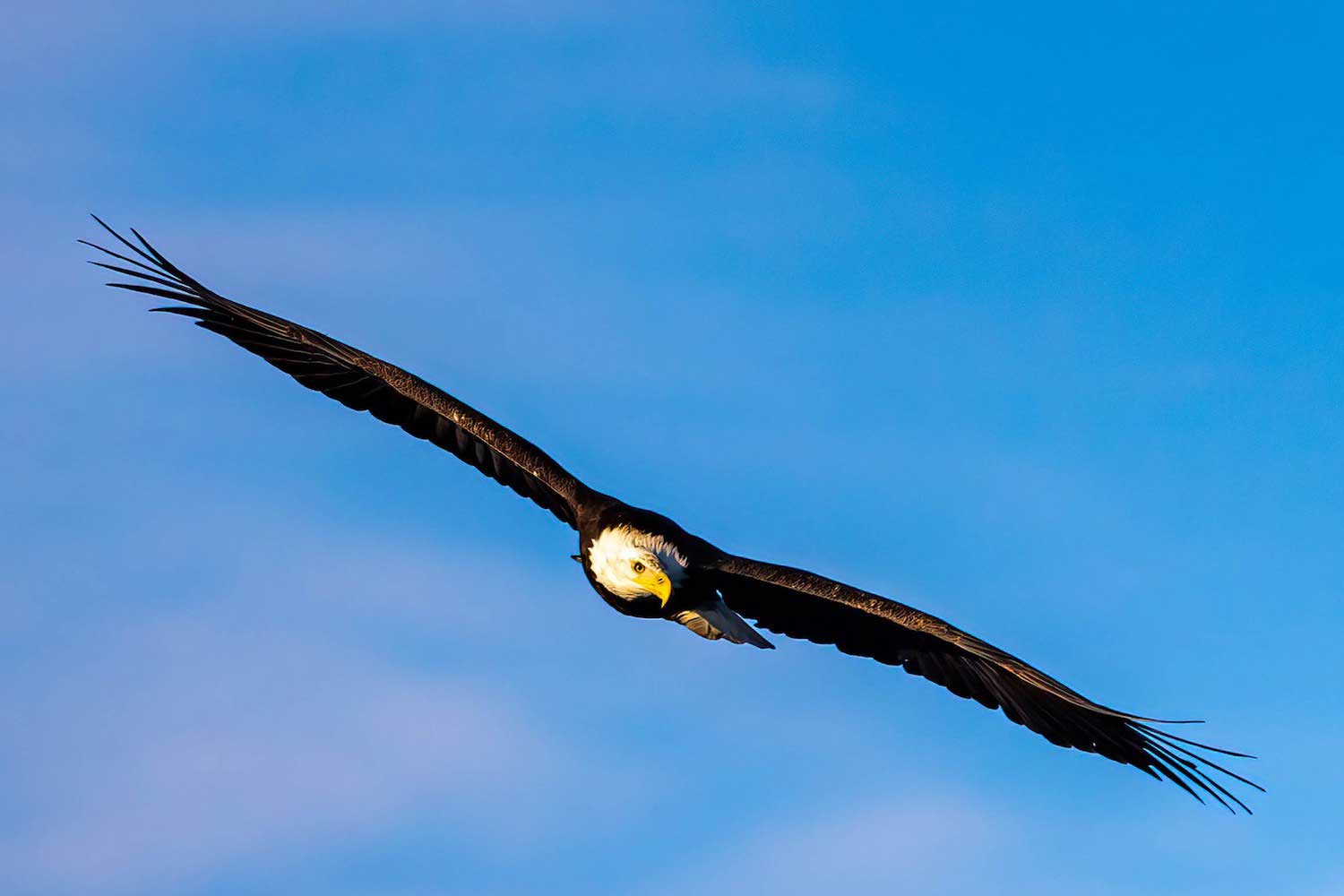 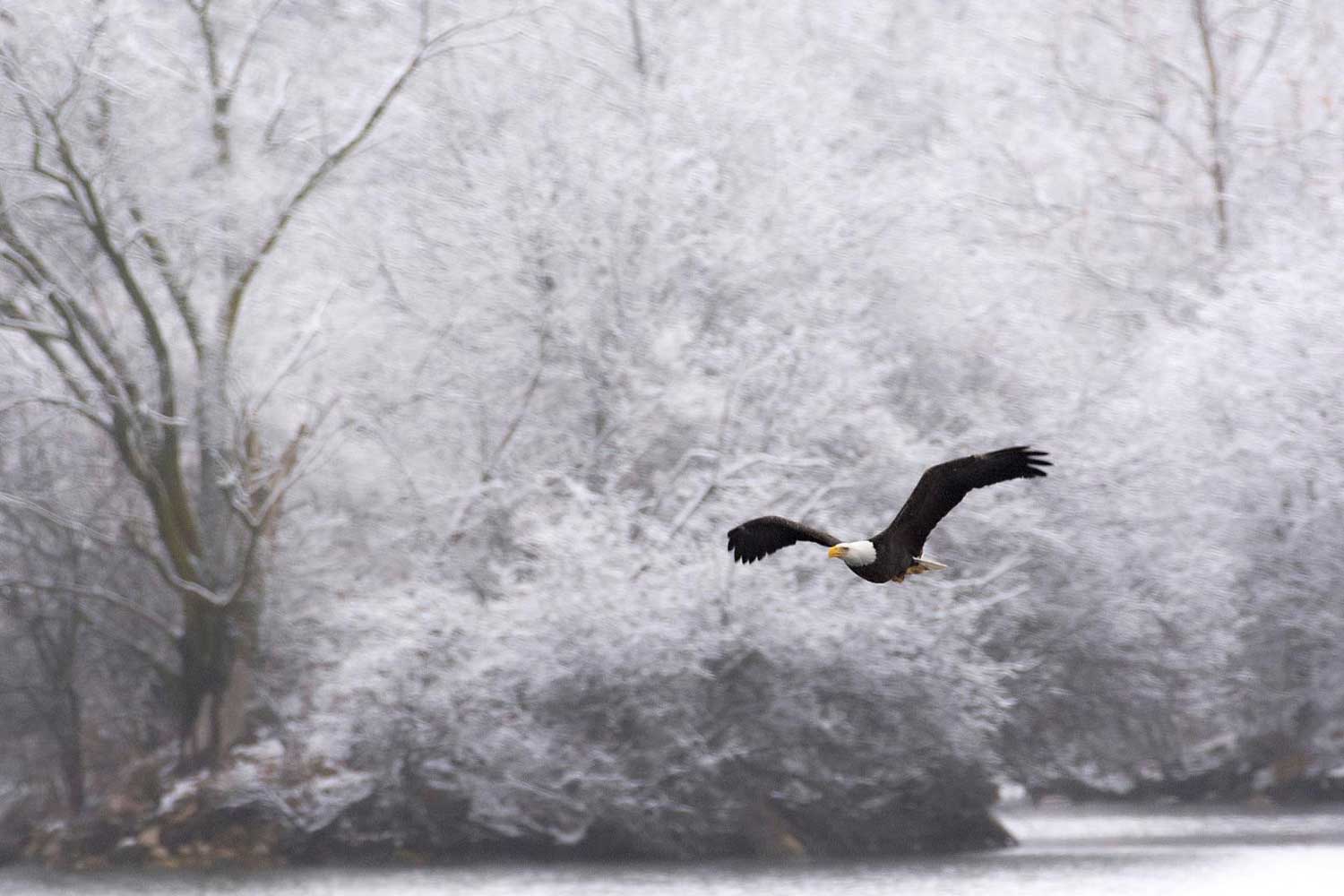 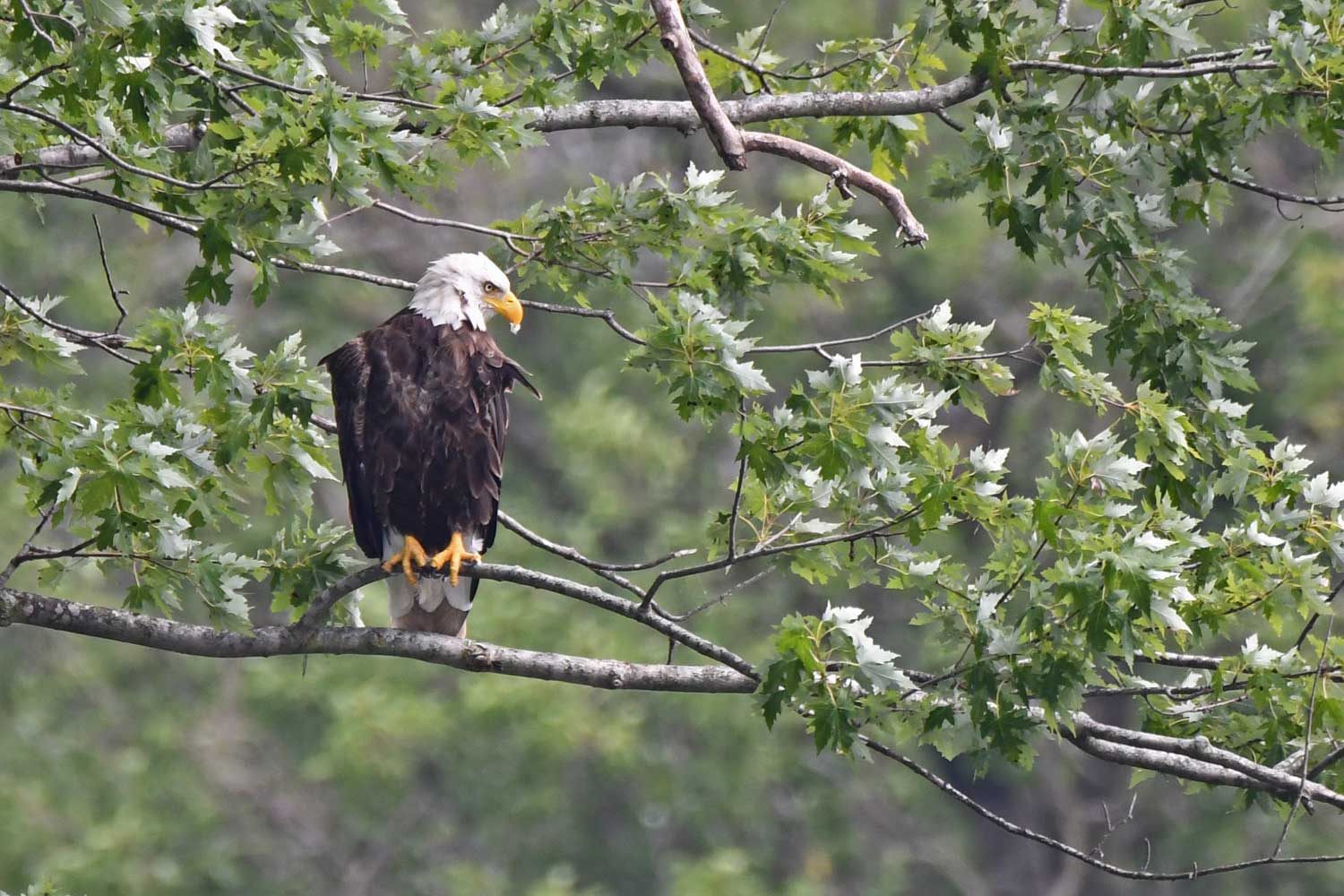 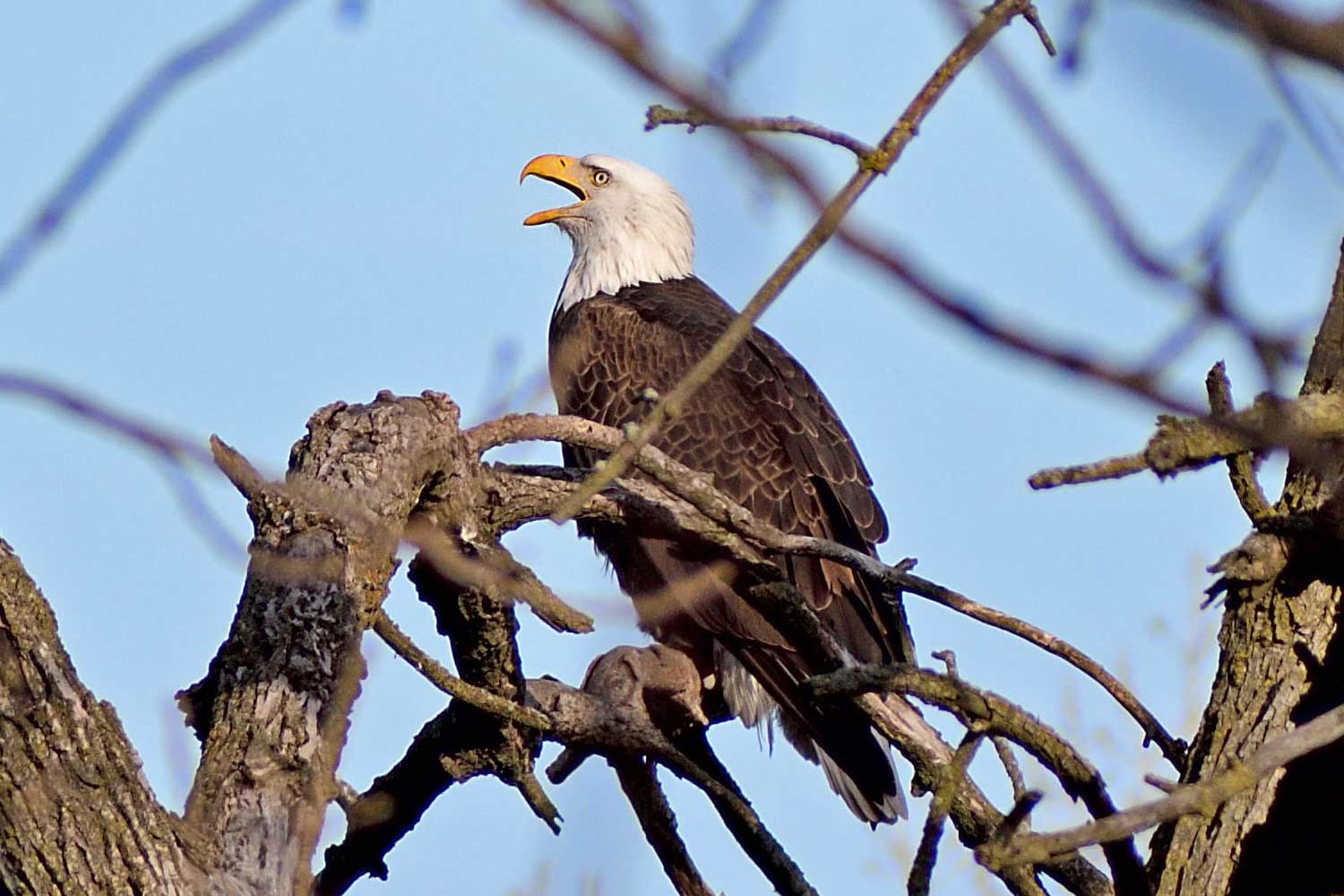 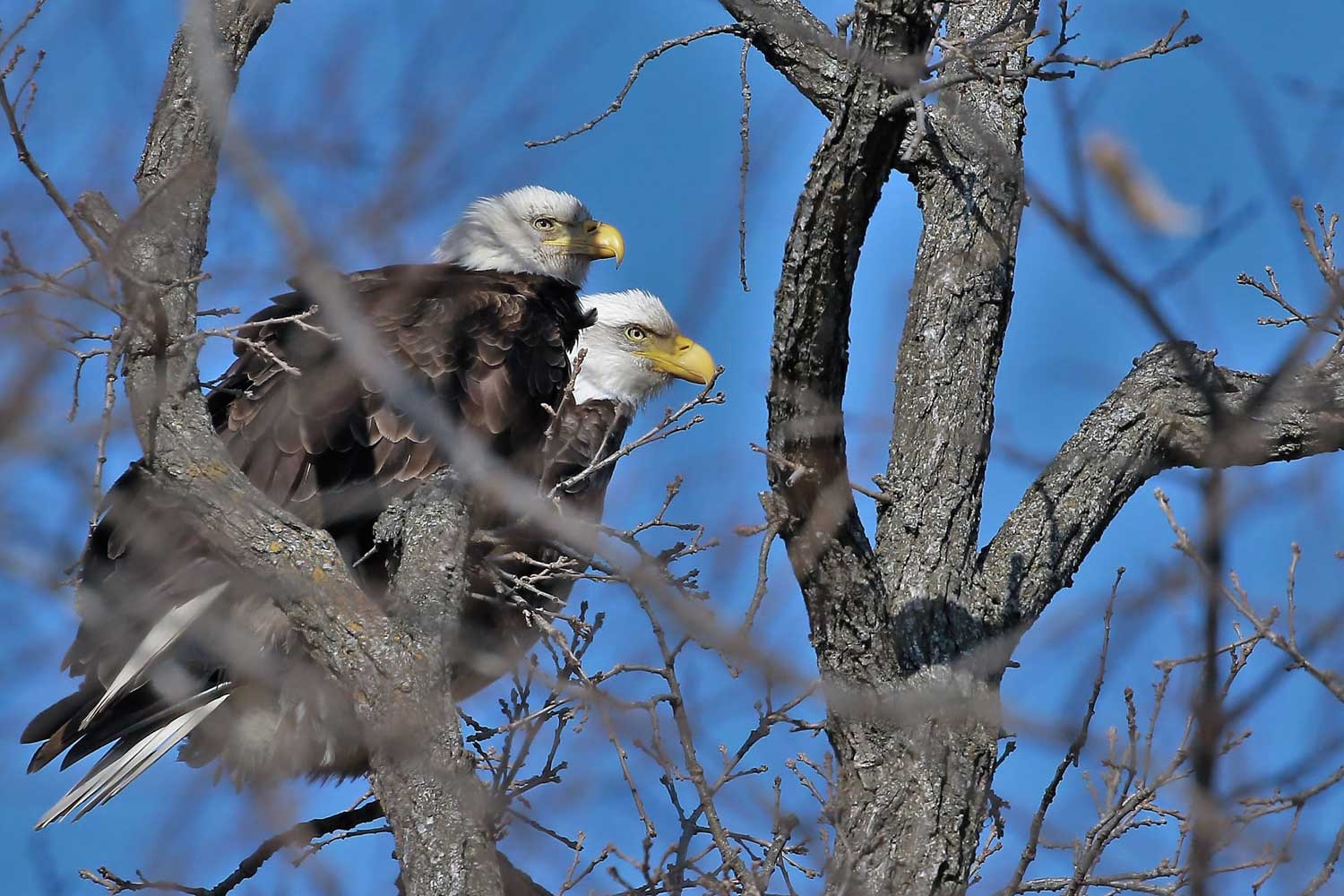