Five things about those shy and inquisitive white-tailed deer 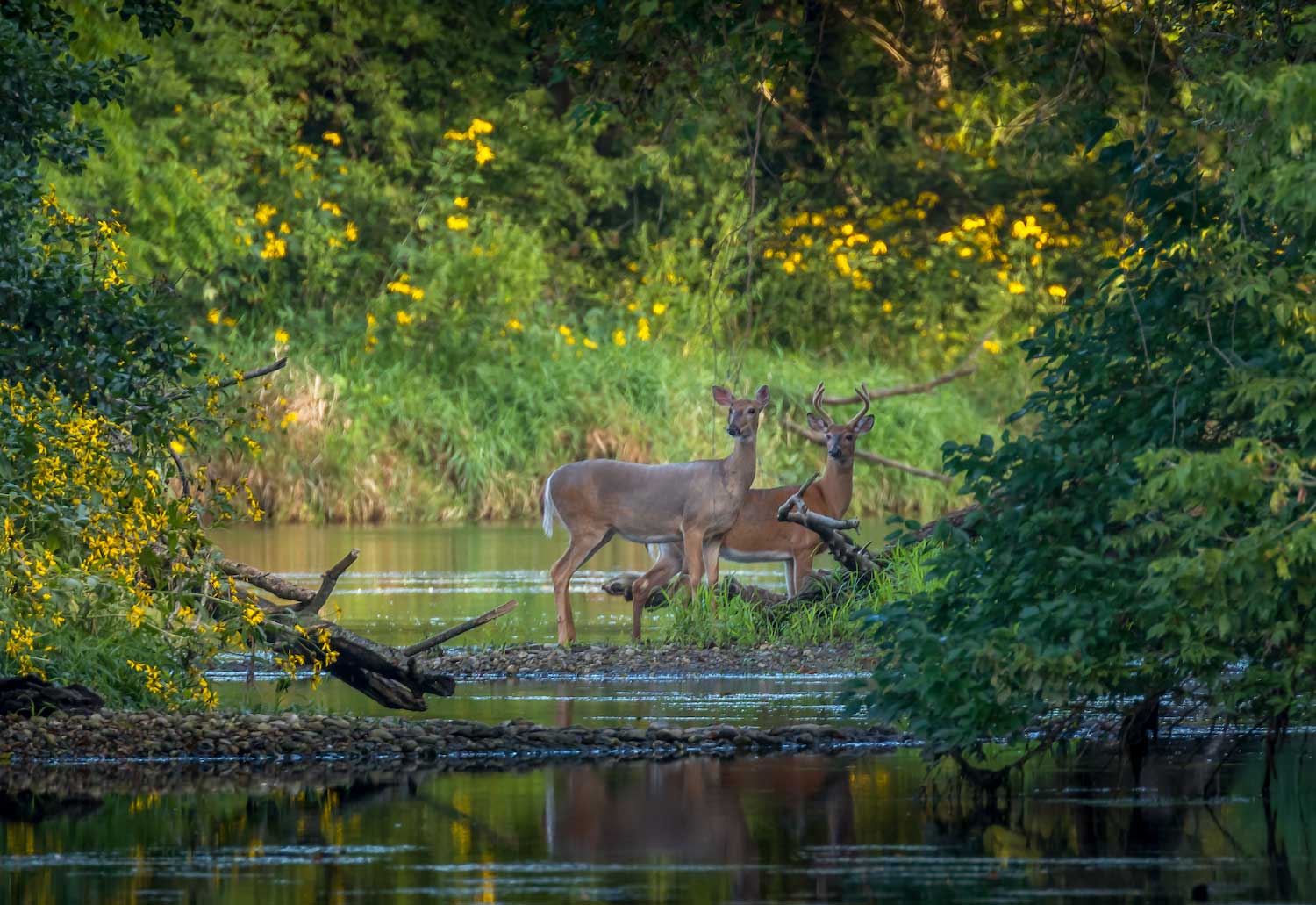 White-tailed deer are curious and shy creatures, aware of your presence and keeping a watchful eye as they graze. They are common in the forested and open landscapes all across Illinois, but that hasn't always been the case.

In the early 1900s, deer were a rare sight in Illinois, so much so that the Illinois State Museum had to look to Wisconsin to find specimens for a museum exhibit. Deer populations suffered for several reasons, including land use changes and the lack of hunting regulations. Lawmakers enacted laws to outlaw hunting, and over the course of several decades the population recovered. In 1957, a deer hunting season was established, a practice that continues today.

Read on to learn more about these curious creatures.

They are small compared to their relatives

White-tailed deer are just about the largest animals we see here in northern Illinois, but by deer standards they are quite small. In fact, they are the smallest member of the deer family, called Cervidae, that live in North America, National Geographic reports.

White-tailed deer typically stand between 2 feet and 4 feet tall at the shoulder, are 2 1/2 feet to 8 feet long and weigh between 90 pounds and 300 pounds, according to the Missouri Department of Conservation. Their white-bottomed tails can be 4 inches to 14 inches long. Males, called bucks, are larger than females, called does.

How do they compare to other cervids in North America, like elk, moose and caribou, also known as reindeer? Moose are the largest of the bunch, standing 3 1/2 feet to 5 feet tall at the shoulder and weighing in at as much as 1,800 pounds. Elk are smaller than moose but still considerably larger than a white-tailed deer, standing 4 feet to 5 feet tall and weighing between 500 pounds and 700 pounds, according to the Rocky Mountain Elk Foundation. Caribou stand between 3 feet and 5 feet tall at the shoulder and typically weigh between 175 pounds and 400 pounds.

They have some impressive skills

Deer are known for their quiet, peaceful nature, but they are pretty skilled at traversing the land. They can run at speeds of up to 30 mph and jump as high as 8 feet. Plus they are good swimmers and will enter the water to evade a predator, according to Animal Diversity Web.

Their speed and agility help them get away from predators, and they can also rely on keen vision and hearing to help them detect predators nearby. Although deer are mostly solitary, they are often seen grazing in groups. When a deer senses danger, they are able to signal to other deer by flashing the white on the underside of their tail.

Deer are known to use the same routes to traverse their home range over and over, sometimes creating visible pathways along their commonly traveled routes. Although they prefer traveling the same paths, they are quite the opposite when it comes to finding a place to bed down. They will not pick a resting spot that they have ever used previously, Animal Diversity Web reports.

The only animals that grow antlers are deer and others in the Cervidae family, and they are pretty much universal. All but one cervid species, the Chinese water deer, grow antlers, but in almost all cases only males grow them. The only exception to this is caribou, also known as reindeer. Both male and female reindeer grow antlers, according to Animal Diversity Web.

Antlers are made of bone, but they grow very quickly. They're actually one of the fastest-growing tissues in the animal kingdom. The antlers on a white-tailed deer can grow by as much as a quarter-inch a day, and larger cervids have even more impressive stats. An elk's antlers can grow 1 inch a day!

Antlers are similar to horns like those grown by bighorn sheep, pronghorn and bison, among others. Antlers are bony structures that grow as an extension of the animal's skull, while horns are partially bony and also covered by a sheath made of specialized follicles similar to human fingernails, according to the National Park Service. Most animals with horns do not shed them each year, although pronghorn are an exception to this.

Fawns have spots for an important reason

Most people are quite familiar with the white dotted appearance of fawns, and it turns out those spots play a very important role in protecting them. Their spots mimic the dappled sunlight that hits the forest floors where their mothers hide them away for safekeeping, according to Wildlife Illinois. This helps them avoid detection by their mammal predators, many of which do not see in color.

Fawns can stand and even run slowly just a few hours after they are born, but their mothers will leave them for stretches of up to four hours until they are strong enough to keep up with them, according to the Wildlife Center of Virginia. Does usually hide their fawns away in tall grass or bushes. In addition to their spots, they avoid detection by potential predators because they are born with virtually no scent.

If you find a fawn alone, leave it be, Wildlife Illinois advises. Its mother is likely alive and well nearby and knows where her fawn is and will return soon. Signs a fawn has been injured or orphaned and requires intervention include obvious signs of injury, being cold and wet or covered in fly eggs, constant crying and lying on its side or appearing weak.

Bambi is a white-tailed deer, but he wasn't supposed to be

Bambi may be a fictional deer, but he's based on a real one. The movie "Bambi" was based on a European novel called "Bambi, A Life in the Woods" by author Felix Salten, according to the New England Historical Society. In the book, Bambi was a roe deer, a species of deer native to Europe.

When Walt Disney obtained the rights to the book to create the now classic animated film, he wanted Bambi to be a deer that people from the United States would recognize, so he chose a mule deer from California to be the model for the character, the historical society reports. However, animator Maurice "Jake" Day told Disney that the white-tailed deer and the forests of his home state of Maine were a better choice. Disney was receptive to the idea if Day could prove it.

To that end, Day traveled to the Mount Katahdin area of Maine with a camera and a list from Disney of things to photograph. Day and a friend then spent months shooting thousands of photographs at all hours of the day, according to the historical society. In the end, Bambi and Faline — another deer character in the movie — were based on white-tailed deer, and two 4-month-old fawns were transported from Maine to California by train to serve as the models for the characters.