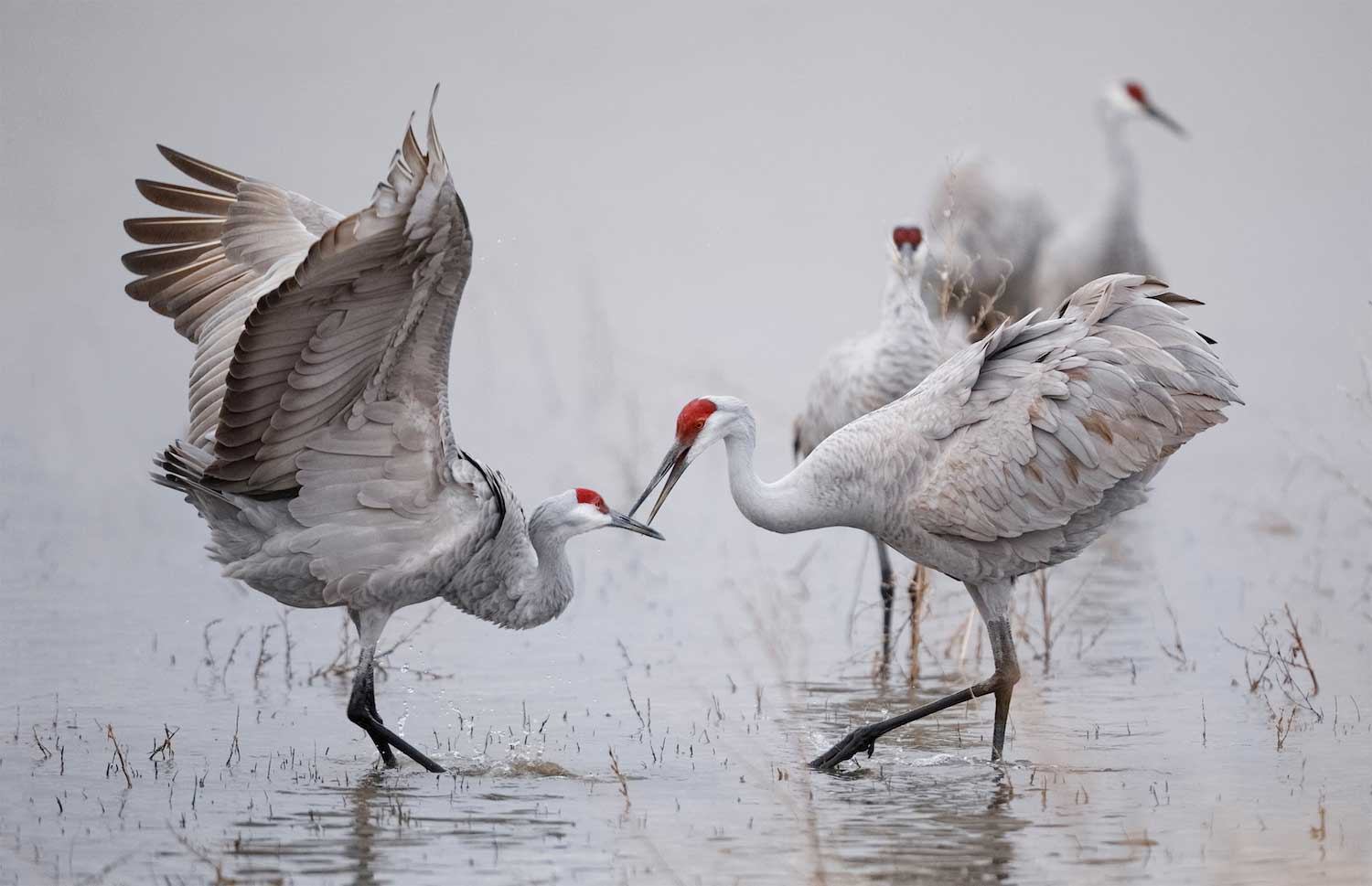 Sandhill cranes are the supermodels of the bird world, tall, elegant and eye-catching with their gray plumage and crimson eye patches.

These gangly cranes stand 3 feet to 4 feet tall on long legs, and their wingspan can be greater than 5 feet, according to the National Wildlife Federation. They spend most of their time in shallow wetlands like marshes and river basins. They are omnivores, eating what is convenient, including plants, grains, small mammals, amphibians, reptiles and invertebrates.

Sandhill cranes are one of 15 crane species in the world, and they are the most numerous and widespread, according to The Nature Conservancy. The only other crane species found in North America is the whooping crane, which is endangered.

In Illinois, sandhill cranes are mostly seen during their spring and fall migrations, although some birds do breed in northern Illinois, according to Wildlife Illinois. Their spring migration usually brings them through Illinois between mid-February and mid-April, and they pass through again on their way south between mid-September and mid-November.

They make quite a racket

It's often said that you can usually hear sandhill cranes flying overhead before you see them, and once you know the sound they make, you aren't likely to confuse it for anything else. Their call is unique, said to sound like trumpeting or bugling coming from overhead, and they owe their loud call to their anatomy.

Sandhill cranes have long tracheas that form a coil in their sternum, according to the Cornell Lab of Ornithology. Because of the coil shape, the call they emit has a low pitch. The low, loud call can be heard from as far as 2 1/2 miles away, so you may have to strain your eyes while trying to catch a glimpse of them flying overhead.

These noisy cranes make their trumpeting call both in flight and while on land, and the trumpeting call isn't their only sound. They have at least 18 vocalizations, including honks, purrs and trills, that they use to communicate with their flocks and their mates. They even have been seen making snoring sounds while roosting, according to The Nature Conservancy.

They gather in huge flocks

It's not unusual to see large flocks of sandhill cranes passing overhead each spring and fall during their migration season, but on the ground these flocks can be massive, and nowhere more so than an 80-mile segment of the Platte River in Nebraska. There, more than 80% of all the sandhill cranes on Earth — numbering in the hundreds of thousands — gather each spring as they make their way north to their breeding grounds, according to Smithsonian Magazine.

The sandhill cranes arrive and leave Nebraska in three waves from mid-February to mid-April, with each group of birds spending about a month along the river, the Smithsonian reports. While there, they eat grain from agricultural fields to fuel them for the rest of their journey, with most cranes traveling to their breeding grounds in Canada.

Closer to home you can see the spectacle of these huge flocks of cranes each fall at Jasper-Pulaski Fish and Wildlife Area in Medaryville, Indiana, about 100 miles east of Will County. At Jasper-Pulsaki, sandhill cranes congregate from October to December each year, feeding in the shallow marshes during a stopover on their journey south. The large flocks at Jasper-Pulaski aren't as enormous as those in Nebraska, but at times, the population of cranes can number almost 30,000.

Sandhill cranes are among the oldest birds on Earth, with fossils of these large birds dating back millions of years. These birds have changed very little over time and likely look very similar to how they did millions of years ago. A sandhill crane fossil dating back 2.5 million years has been found in Florida, and a fossil from a very closely related bird, the crowned crane, that dates back 10 million years has been found in Nebraska, according to the National Audubon Society.

So old are sandhill cranes and related cranes that they are considered one of the most successful life forms on Earth, according to Smithsonian Magazine. They have outlasted more than 99% of all species that have ever existed, millions and millions of animals in all.

Even the migratory patterns of these birds have likely changed very little in thousands of years, the Audubon Society reports. One of the most significant spots in their migrations is the segment of the Platte River in Nebraska where they gather each spring, and it's thought that they have been staging there on the migrations for more than 10,000 years, according to the Audubon Society.

They can really bust a move

Birds aren't exactly known for their moves, but sandhill cranes can perform elaborate dance routines when the time is right. When is the time right? When the cranes are trying to attract a mate. These birds mate for life, and they chose their lifelong partner based on their dance moves, according to the Cornell Lab.

The dance routine starts with a male trying to catch the attention of a female. Once they have each other's attention, they bow to each other, the Nature Conservancy reports. After bowing, the dancing begins, with the cranes outstretching their wings, leaping in the air and pumping their heads. Although the dance ritual is associated with attracting a mate, the cranes perform it all year, and once one couple starts dancing, others in the flock will as well.

They can survive on their own very quickly

Young sandhill cranes, called colts, are capable of leaving the nest only eight hours after they hatch, according to Cornell Lab. They are also able to run and even swim soon after hatching. Although they are capable of meeting their needs on their own so soon, juvenile sandhill cranes usually stay with their parents for nine to 10 months and leave the family group the spring after hatching.

Mated pairs of sandhill cranes build their nests together, using grasses, cattails and other vegetation to build a mounded nest on the ground. The female cranes almost always lay two eggs, and the female is most often the one to stand guard and incubate the nest, Cornell Lab reports. Although sandhills almost always lay a pair of eggs, only one colt usually survives to fledging season.