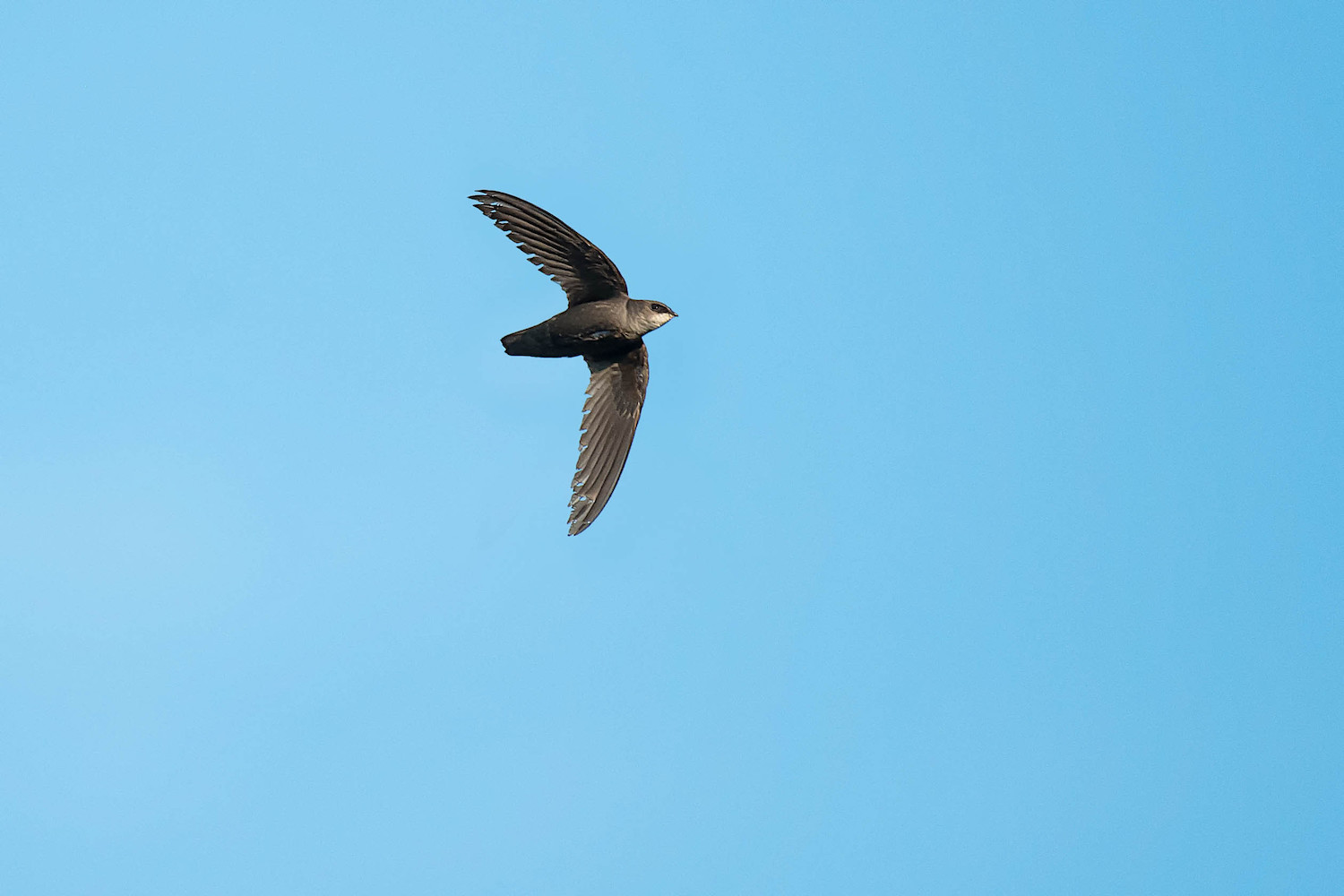 Talk about a bird with an appropriate name. Not only do chimney swifts prefer to nest in chimneys, they are also a sooty gray color — like you might find in a well-used chimney.

Chimney swifts are almost always seen in flight, and during their migrations it can be quite a sight to see hundreds or even thousands of the birds congregating together in roosting spots, according to the Cornell Lab of Ornithology.

They are one of four types of swifts in the United States, but they are the only swift in the eastern United States, Birds & Blooms reports. In flight, they reveal their thick, cylindrical bodies, earning them the nickname “flying cigars.”

They are small birds, only a little larger than a sparrow. They are dark gray or grayish-brown in color, and their throat patch is usually lighter in color, Cornell Lab reports. They have round heads and short necks, and their bills are short and stubby. Males and females have the same plumage.

Because they nest in chimneys and other similar structures, they are most common in populated urban and suburban communities, Cornell Lab reports. Even in their southern wintering grounds in South America they will look for chimneys or similar vertical structures for roosting.

Read on to learn more about these flying cigars.

They can really fly

Flight isn’t exactly unique among birds. It’s certainly not universal, but the vast majority of birds can fly. Chimney swifts take it to the next level, though. They are almost always flying and are among the most aerial of all birds, according to the American Bird Conservancy.

Chimney swifts are always in flight except when they are nesting and roosting overnight, Cornell Lab reports. They are so adapted to flight that they eat and drink and even bathe while flying. Eating is simple enough; they snatch insects out of the air as they move along. Bathing in flight requires some maneuvering, however. To do this, they dip down to the water’s surface, slap the water with their bodies and then bounce to shake the water from their feathers.

Because they are almost always flying, they can travel long distances — up to 500 miles a day, The Wildlife Center of Virginia reports. They are also precise fliers, able to execute complicated maneuvers while on the hunt for insects to eat. They are aided in flight by their long wingtips, a feature they share with hummingbirds.

And they can really eat, too

Chimney swifts catch their prey in flight, snatching insects from mid-air, but how often they do this is even more impressive than their ability to do it. These birds can eat as many as 12,000 insects in a single day, according to The Wildlife Center of Virginia.

Chimney swifts feed over many different types of habitats, including grasslands, forests, marshes and even urban and suburban neighborhoods, Cornell Lab reports. In flight, the swifts grab insects with their bills. Their primary catches include flies, bees, ants, beetles and fleas.

Because they catch their prey in flight, they prefer to focus on swarms, where they can catch many insects at once, according to the National Audubon Society. While they mainly eat insects, they may also eat spiders and berries. They can also eat at rest, picking insects or other food items off of trees.

We know that chimney swifts spend almost all their time in flight, but even when they are at rest they don’t perch like other birds. They actually aren’t able to perch like many other birds do, according to the Cornell Lab.
Instead, in those rare moments when chimney swifts aren’t flying, they cling to vertical surfaces like walls and trees. They are able to do this because of the unique structure of their toes, nails and tail feathers, according to The Wildlife Center of Virginia.

Sometimes, young chimney swifts fall down from their nests, and because they nest in chimneys it’s not uncommon to find them in fireplaces. When this happens, you can simply place them back on the chimney wall and they will be able to cling onto it and climb back up, according to the South Plains Wildlife Rehabilitation Clinic.

They hide their nests away

Many birds construct their nests in the branches of trees, while others rely on the ground to serve as a safe spot for nesting. Chimney swifts prefer to construct their nests in more out of the way locations. Chimneys are obviously the preferred spot, but they’ll also nest in outhouses, barns, sheds, garages, even tree cavities, according to the Cornell Lab.

But how do you get a nest to stick to the wall of a chimney or another structure? Chimney swifts do it with their saliva. They weave twigs and other plant material into a loose, saucer-shaped nest, then they stick everything together with their glue-like saliva.

Both the male and female work together work together to build the nest, then the female lays three to five solid white eggs that are incubated for about a week before hatching, according to The Virginia Wildlife Center. Nestlings and hatchlings can be noisy as they call out for food, but after about 30 days they are ready to leave the nest and survive on their own.

We don’t see as many as we used to

The chimney swift population is in steep decline in the United States, although the reason for it is different than it is for many other birds. While many bird species face population declines because of habitat loss, pollution and climate change, among other factors, chimney swift numbers are falling for a very specific reason: They don’t make chimneys like they used to.

The chimney swift population thrived after European settlement in the United States because of the addition of homes and buildings with chimneys to the landscape, the Cornell Lab reports. Prior to that, the birds nested in caves, hollow trees and similar structures. Today, though, chimneys are designed to be more narrow, and many are capped. This means the swifts have lost access to many readily accessible nesting locations.

In the United States, the population of the birds has dropped by about 53%, and in Canada it’s dropped 90%, according to the National Audubon Society. Their global population today is estimated to be about 15 million. In addition to a lack of nesting locations, the chimney swift population is also affected by human disturbance at nesting locations, climate change and decline in prey populations.