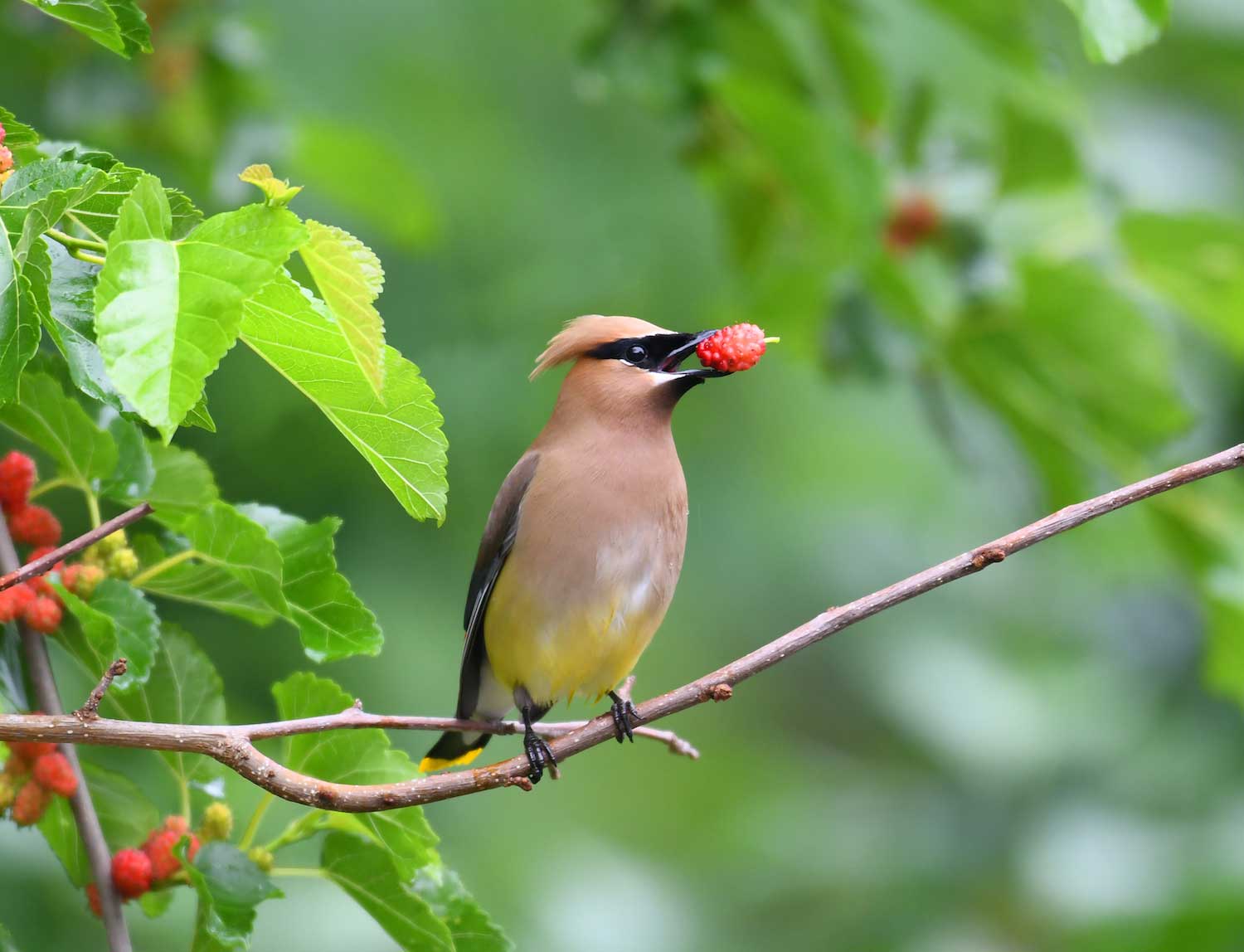 Drunk birds haphazardly flying through the sky isn't a common sight, but it does happen from time to time, and when it does it's likely to be an inebriated cedar waxwings.

These birds live in Illinois year-round, and their diet mainly consists of fruit, along with insects in the warmer months. They can exist on fruit alone for months at a time, according to the Cornell Lab of Ornithology. They eat fruit by plucking it off a branch or stem and then swallowing it whole.

Normally a diet of fruit poses no problems for cedar waxwings, which feast on berries of all kinds, most commonly cedar berries, but also mulberries, serviceberries and strawberries, among others, the Cornell Lab reports. However, sometimes they come across overripe berries that have begun to ferment and produce alcohol. Eating enough of these berries can cause the birds to become intoxicated and can even be fatal if they eat too many.

Luckily the problem of drunk cedar waxwings is a rare one, and we're more likely to take notice of these bird because of their unique appearance. Once you've seen a cedar waxwing, you're unlikely to confuse it with anything else.

Cedar waxwings have light brown heads that gradually change to gray on the wings and back, the Cornell Lab reports. They have lemon yellow bellies and a black, bandit-like mask on their faces. Their tails are gray with bright yellow tips, and they have waxy red tips on their wing feathers for which they are named. Males and females look the same except that males usually have a darker chin than females.

It turns out that what the birds eat can affect some of the bright coloring on these birds. While most have bright yellow tail tips, in the 1960s waxwings with orange tail tips began to be observed. Scientists were able to determine that this unusual coloration was the result of a diet high in fruit from honeysuckle, an invasive species that is not normally part of the birds' diet, according to the National Wildlife Federation.

Cedar waxwings are strikingly similar in appearance to Bohemian waxwings. The latter are scarcely seen in Illinois, although their ranges do overlap in some places. The main differences in appearance between the two types of waxwings are that Bohemian waxwings' bellies are gray instead of yellow and the underside of their tails is a warm peach or cinnamon color instead of white, Cornell Lab reports.

Cedar waxwings birds mostly live in forests, particularly in wooded areas near streams. They've become more common in residential areas as ornamental berry bushes, shrubs and trees have been added to landscapes, according to Cornell Lab. In winter, especially, it's common to see them near fruit-bearing plants. And in fall and winter they sometimes gather in large flocks near these plants, making them hard to miss.

Waxwings are very social birds, and they are able to communicate with other birds with both sounds and physical behaviors, the wildlife federation reports. They even sometimes nest in groups, with a cluster of about a dozen nests constructed together in a general area.

The birds reach maturity at about a year old, at which time they begin to look for a mate. Courtship starts with a male performing a dance and offering a gift, like a piece of fruit, an insect or flower petals, to a potential mate, according to the wildlife federation. If the female is interested, she will pass this gift back and forth with the male a few times before eating it.

Once paired, the two waxwings will be monogamous for the entire breeding season. The female will build the nest, and once the eggs have been laid she will incubate them while the male stays nearby and brings her food and watches for predators.

The eggs will hatch after a few weeks, and both the parents will feed the nestlings until they are old enough to leave the nest between 14 and 18 days after hatching, according to the National Audubon Society. Once the hatchlings leave the nest, they form their own flocks to live with.