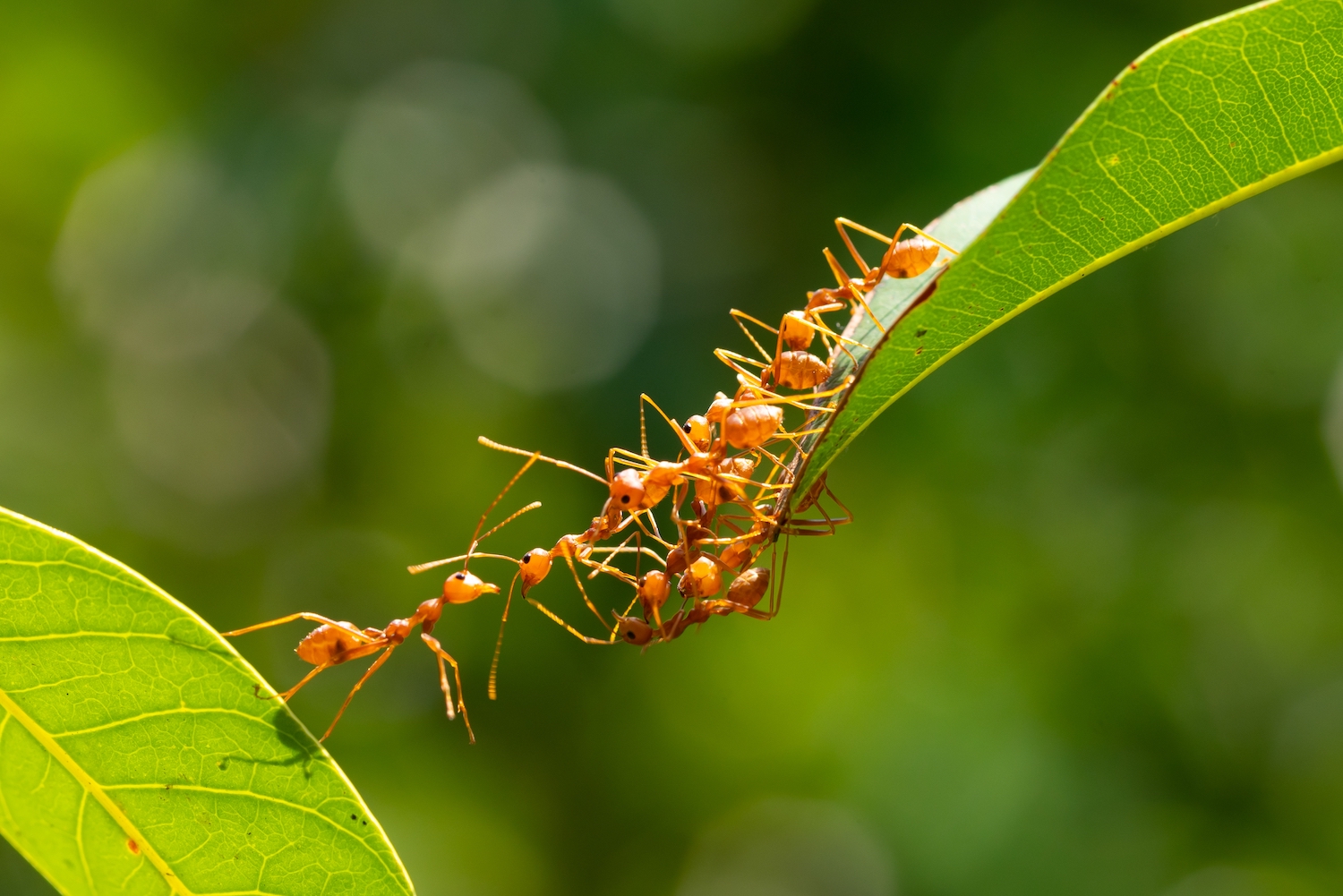 Ants have a reputation for being hard workers. They are seemingly always busy, marching here, there and everywhere, and they seem impossibly strong, like the body builders of the insect world. Their reputation isn't all positive, however. Ants have been known to ruin a good picnic or send us scattering when hordes of them move through an area.

Whether you admire them for their work ethic or admonish them for ruining your time outdoors, they are essential. For starters, they keep the soil healthy by aerating it with all their activity, according to the Missouri Department of Conservation. They also decompose wood and other organic matter in soil. Some plants rely on ants to disperse their seeds, and, of course, many other creatures rely on ants as a regular food source.

There's more than you can fathom

If the ants go marching two by two (hurrah, hurrah), the world's population of ants would make for one very long line. It's obviously difficult to get an exact headcount on the world's ant population, but scientists have made an educated guess, and the number is going to astound you — if you can even wrap your head around it. The world's estimated ant population is 20 quadrillion, a number that looks like this: 20,000,000,000,000,000, or a 20 with 15 zeros, according to the New York Times.

Compare that to the Earth's human population, which is projected to surpass 8 billion in 2022, and that gives you about 2.5 million ants for every one person. And while one ant may be just a teeny, tiny thing, the collective weight of all the ants on Earth is about the same as the weight of two Pyramids of Giza, the New York Times reports.

Even the number of species of ants in the world is impressive, with more than 10,000 different kinds of ants populating every part of the world except Antarctica, according to National Geographic. The greatest diversity of ants is in tropical rainforests, where ants can constitute as many as half of all the insects in the ecosystem.

They really do have super strength

You've probably seen a cartoon of an army of ants carrying away a picnic's worth of food on their backs. While you don't need to worry about that happening at your next al fresco meal, ants do possess superior strength. In fact, they can lift between 3,400 times and 5,000 times their body weight, according to a study published in Science Daily. The key to this seemingly supernatural strength is their neck joints. Researchers were able to create a centrifuge to replicate the force of increasing weight on the ants' neck joints, examining how much pressure they could withstand with the aid of CT scanning technology.

Ants can also thank their tiny size for their strength. Because they are so small and lightweight, their muscles don't have to provide their bodies much support. That means they can instead use their muscles to help lift, according to the study. If ants were larger than they are, they wouldn't be as strong because they would have to rely on their muscles to support their own body weight.

Think humans are the only farming animals on Earth? Think again. Ants have been cultivating crops and livestock for longer than humans have even existed, Treehugger reports. Ants honed their farming skills more than 50 million years ago. Humans, on the other hand, have only been farming for about 12,000 years.

So what exactly do ants farm? More than 200 species of ants farm fungus, according to Treehugger. They create gardens of fungi using grass and dead insects to help fertilize their crops. Some species of ants even use pesticides to prevent parasites from harming their fungus crop. They do this by growing bacteria that produce antibiotics with antifungal properties.

Many ant species specialize in raising livestock, often aphids. They are partial to aphids because of the honeydew they secrete, Treehugger reports. Their farm operation is quite thorough. They control the aphids with a chemical on their feet that prevents their wings from growing, and they protect them from predators and take care of their eggs. When a queen ant leaves her home colony to start a new colony, she will often bring aphid eggs with her to establish her own aphid farm.

Their colonies can be massive — and crowded

Most ants live in colonies, and their colonies, also called formicaries, are like sprawling insect metropolises. The largest ant colony ever discovered stretched more than 3,700 miles wide, according to National Geographic Kids. This supercolony, found in Argentina in 2000, was actually 33 different ant population that had merged into one massive colony with billions of worker ants and millions of nests.

Most ant colonies don't stretch on for thousands of miles, but they can be big and crowded. As many as 8 million ants can live in a colony, according to the San Diego Zoo. That's similar to the population of the United States' largest city, New York, which has a population of 8.8 million people, according to the 2020 U.S. Census. An ant colony typically consists of a queen, whose only job is to lay eggs, along with many, many female workers and sometimes a small number of male ants.

Within a colony, workers can change jobs frequently, and they aren't always busy doing their assigned work, the San Diego Zoo reports. Some workers feed the queen, while others may be responsible for moving eggs into chambers in the nest where they will hatch and mature into larvae. Some workers are tasked with keeping the colony clean and removing the bodies of dead ants, and many ant species also have workers called soldiers, or majors, that defend the nest.

They communicate without talking

Ants are able to say a lot without saying anything at all. Instead of verbal communication, they use pheromones to communicate with other ants in the colonies, according to the San Diego Zoo. The pheromones are released from specialized glands on their bodies, and each pheromone has a special message. Other ants "read" these messages using their antennae.

Pheromones can be used to direct other workers to a food source or alert them to a predator or danger. When ants die, they produce a scent that alerts workers to remove their bodies from the nest, helping keep it clean and healthy, the zoo reports. They can also use scent to determine the rank and social order of other ants in the colony.

And while ants certainly don't talk, there are some ants that use sound to communicate, just like crickets and grasshoppers do. Ants in the Myrmica genus have a spike on their abdomen that they can pluck with their legs, which creates a sound, Treehugger reports. Ants don't have ears, but they can "hear" these sounds by sensing the vibrations in their legs and antennae.