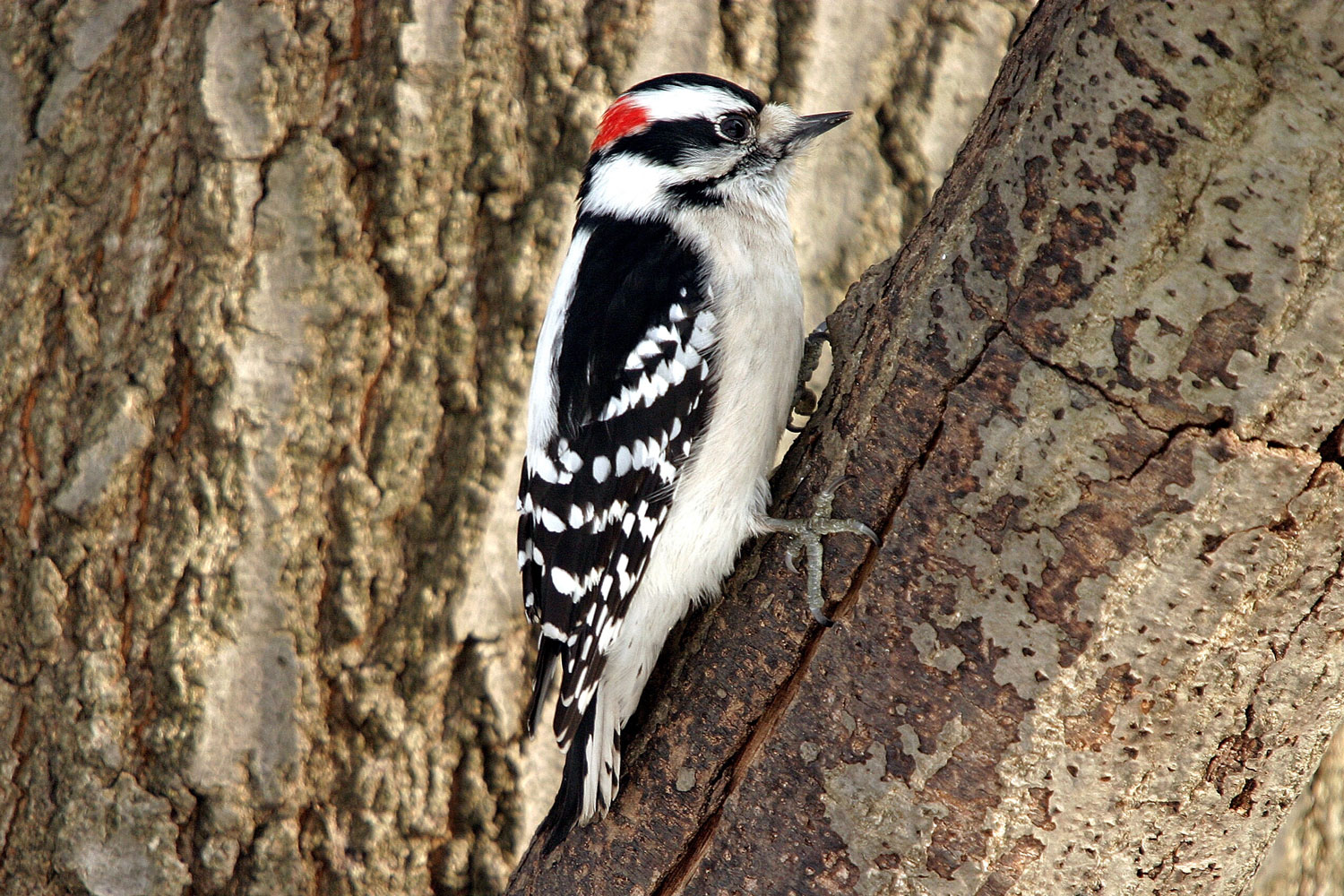 Illinois is home to seven woodpecker species, and the smallest of these is the downy woodpecker.

Like all woodpeckers, downies peck at trees for a variety of reasons. They build their nests by excavating cavities in trees, and they also look for food by pecking at trees, according to the U.S. Fish and Wildlife Service. It's also how they communicate, using a rapid-fire pecking technique called drumming both to attract a mate and mark their territory.

In the winter, downy woodpeckers can be seen among mixed flocks of birds, often with nuthatches and chickadees. They rely on the other species in these flocks to help them find food and keep them safe from predators, according to the Cornell Lab of Ornithology.

Read on to learn more about downy woodpeckers.

These birds are quite small in size, smaller than a robin but bigger than a sparrow, according to the Cornell Lab. They are mostly black and white, with black and white striped heads, black and white checked wings and a white stripe down their otherwise black backs. You can tell the difference between males and females because only the males have a small red patch of feathers on the backs of their heads.

Downies typically weigh less than 1 ounce, and they are between about 5 1/2 and 6 1/2 inches long, Cornell Lab reports. Their wingspan ranges between about 10 inches and 12 inches.

Downy woodpeckers live across most of the United States, except for the southern portions of California, Arizona, New Mexico and Texas. Most populations of downies don't migrate, but some in the northern end of their range may travel south in the winter, according to the National Audubon Society. In Illinois, these woodpeckers are year-round residents.

These woodpeckers prefer open woodlands areas, especially those near streams and deciduous forests. They are also frequent visitors to and residents of orchards, city parks and urban and suburban habitats, Cornell Lab reports.

Downy woodpeckers are primarily insect eaters, feasting on ants, caterpillars and beetle larvae that they find in tree bark, the Cornell Lab reports. They also eat plant matter, which consists of about 25 percent of their diet. Among the plants they are at acorns, berries and grains.

They are the woodpeckers most likely to visit bird feeders. Their favorite feeder food is suet, but they will also eat black oil sunflower seeds, peanuts, chunky peanut butter and millet.

As insect eaters, downies help control the population of many insect species, according to the Missouri Department of Conservation. And because they eat a lot of insect larvae from trees, they help keep trees and forests healthy. Their nesting cavities are also used by other birds as a safe haven and nesting site for birds that don't make their own tree cavities for nests.

Some of the insects they eat are agricultural pests, such as apple borers, bark beetles, corn earworms and tent caterpillars, according to the Cornell Lab. This helps control the population of these pests, providing a valuable service to farmers and other growers.