Don't feed the wildlife? What about the birds? 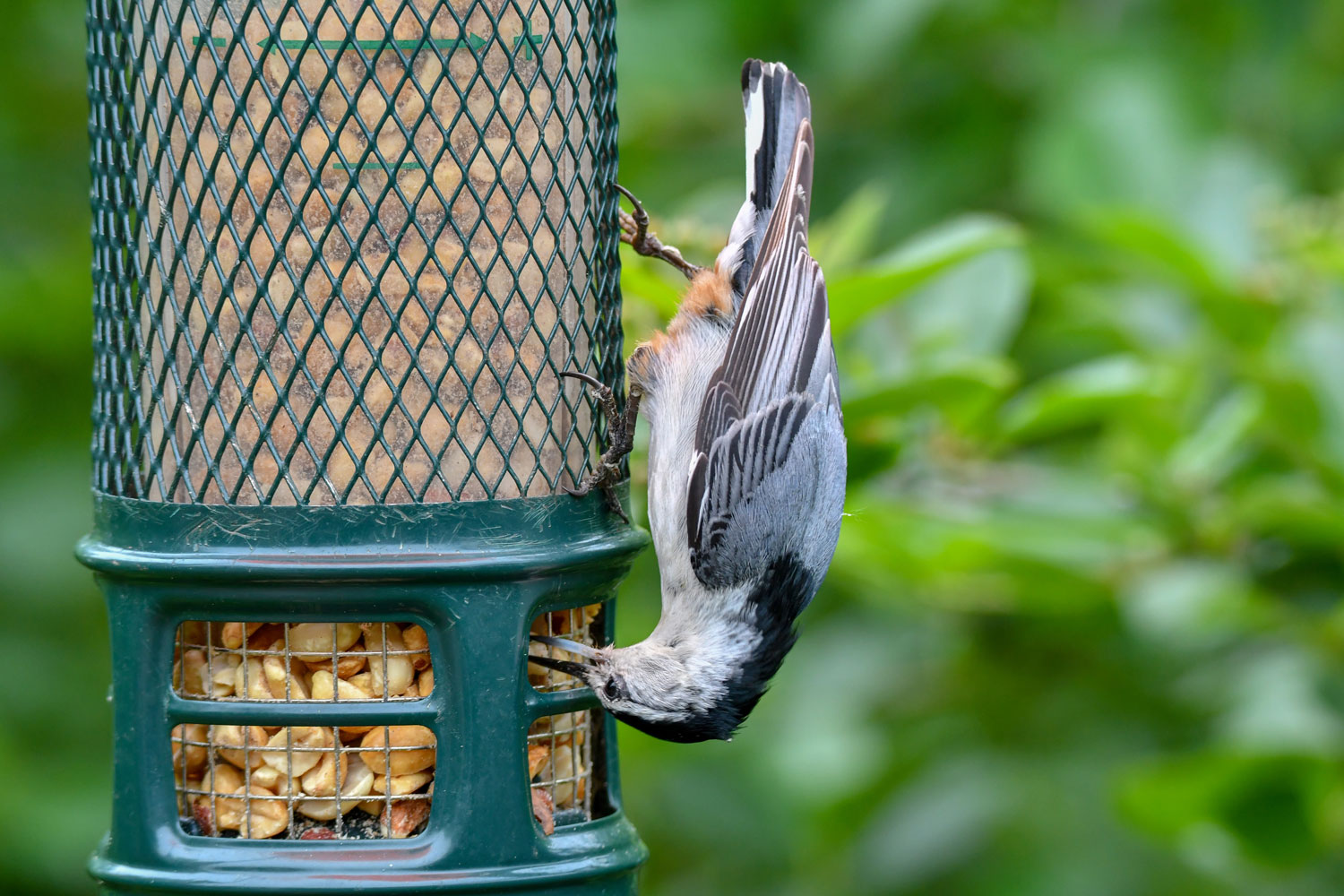 A white-breasted nuthatch eats from a feeder at Plum Creek Nature Center. (Photo by Chris Cheng)

You've seen the signs before, dotting the landscape at parks, zoos, campgrounds and other outdoor recreation sites. "Don't feed the wildlife," they implore.

These signs are intended to protect the well-being of both wildlife and people, because feeding wildlife isn't safe for either, for several reasons. One of the primary reasons we shouldn't feed animals is because the food we offer isn't good for them, according to the Wildlife Land Trust. Continuous consumption of these foods can cause health problems for the animals.

Feeding wild animals also puts them at risk for injuries and disease, because it can cause overcrowding and too much competition for the limited supply of food, the land trust reports.

In addition, feeding wild animals can cause them to become habituated to humans. They become familiar with us and the spaces we inhabit and can learn to beg for food, which can pose a safety risk.

Situations like these, where wild animals become overly familiar with and comfortable around humans, is among the top reasons many places prohibit feeding wildlife, be it in a public place or in your own backyard. In Illinois, it is illegal to feed deer, but state law does not prohibit feeding other wildlife, according to the University of Illinois Extension. However, some municipalities across the state have enacted their own ordinances prohibiting residents from feeding wild animals.

However, these ordinances typically include one big exception: feeding wild birds from bird feeders. But why do we treat birds differently than other wildlife?

Essentially, it's because feeding birds from bird feeders does not alter their behavior or diet in a way that causes them to become dependent on humans, said Bob Bryerton, an interpretive naturalist at the Forest Preserve District's Plum Creek Nature Center.

Most birds get the majority of the food they eat in the wild, although more than 100 birds that live in North America supplement their natural diet with birdseed, suet, fruits and nectar stocked in bird feeders, according to the National Audubon Society.

Food from bird feeders helps birds most in winter, when other food sources are scarce. In addition, some birds, including ruby-throated hummingbirds and Baltimore orioles, eat from feeders during their annual spring and fall migrations.

Leaving food out for birds during their migration periods can be beneficial, giving them a way to fuel up during their long trips north and south, Bryerton said. At Plum Creek Nature Center, Baltimore orioles and indigo buntings visit at the feeders in early spring, when food sources are still limited but their energy needs are high. However, later in the season, they aren’t seen at the feeders as much because they are more easily able to find food in their typical habitat.

In the case of the orioles and indigo buntings, their bright colors make them easy to spot at feeders, Bryerton said. So once they are able to find food in an area with better cover, it's a safer choice for the birds because it helps protect them from predators.

When you keep your feeders stocked, you’re helping birds augment their regular diet. Take it away, and they won’t starve. And the food we feed them — nuts, seeds, berries, suet — are healthy foods, many of them part of their regular diet, Bryerton said. That’s not the case when you throw bread or food scraps out for raccoons, squirrels and other mammals.

And because mammals such as raccoons, deer or even squirrels can quickly learn people are providing food, they often become too concentrated in an area, which is unhealthy for the ecosystem. But birds are a different story, Bryerton explained.

“Birds are extremely mobile,” he said. “They don’t get stuck in one spot.”

Birds, too, can more easily find new food sources than mammals that become reliant on people for food.

“If you take bird seed away, they don’t seem to suffer like other animals do,” Bryerton said.

Feeding wildlife can cause animals to spread diseases — and not just to other wildlife. For example, raccoons are related to cats. If you are feeding raccoons, they will quickly learn you are a good supply for food and will start hanging around your yard and house, including areas where your cats may spend time outdoors, Bryerton said. This opens up the possibility for them to pass diseases to your cats.

And don’t think feeding the raccoons and squirrels ends there, either, Bryerton said. Where animals go, so do predators. So if you’ve got a bevy of small mammals hanging around your house looking for food, you may also end of up with a coyote problem, because they need to eat too.

The bottom line is, feeding wildlife other than birds causes them to become comfortable with and reliant on humans. Birds are always a little skittish, wary of anything and everything in their space. That’s not so with other wildlife, like deer, raccoons and squirrels, Bryerton said.