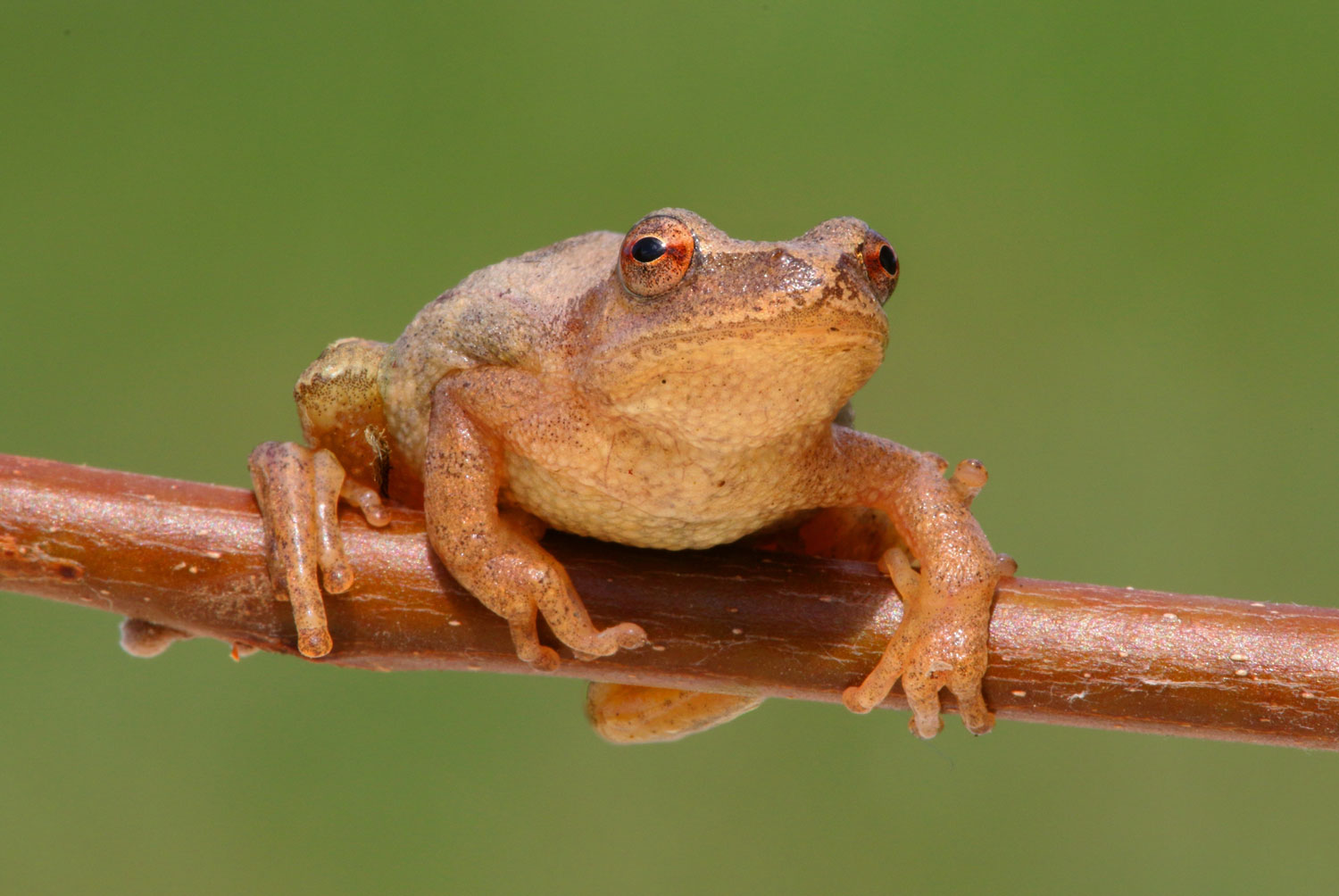 A spring peeper. (Photo via Shutterstock)

In some places, the sound of spring peepers calling out in the night is as much a sign of spring as the sight of a robin.

These frogs are heard far more often than they are seen. Their call sounds like a chorus of bells, and for some it serves as a sure sign of spring's arrival, according to National Geographic.

Male spring peepers call out in search of a female mate soon after hibernation ends, according to the University of Michigan's Animal Diversity Web. In some cases, hundreds of spring peepers can populate ponds and other waterways, so their shrill "peep-peep-peep" nighttime call echoes far and wide. The males with the loudest and fastest calls have the best chance of attracting a mate.

Like almost all frogs, spring peepers lay eggs in water and the offspring hatch as tadpoles. The process by which the tadpoles become frogs, called metamorphosis, takes between 45 and 90 days for spring peepers.

In northern Illinois, the chorus of peeps from these frogs typically begins in early spring, sometimes starting in March but more often in April and early May. The calls are most often heard on warm, wet nights, the Animal Diversity Web reports.

The spring peeper is named for its call, National Geographic reports. Individually, the frogs make a high-pitched peeping sound, but collectively the peeps sound like a chorus of bells. Their scientific name, Pseudacris crucifer, is a reference to the X-shaped marking on its back.

Spring peepers are small frogs, typically measuring between three-quarters of an inch long and one and one-quarter of an inch long, according to the Animal Diversity Web. They weigh less than 5 grams, which is what a quarter weighs. Compare that to the American bullfrog, which can be more than 8 inches long and weighs more than 1 pound.

Most often, spring peepers are a shade of green or brown, although they can be more yellowish or red in color. Their bellies are white or cream-colored, and they have markings across their backs in the shape of an X. The X is usually dark in color. It can be very faint on some frogs, but it's always visible. They have disks on their fingers and toes that help them climb trees and other structures.

These frogs can be found all across Illinois, according to the Illinois Department of Natural Resources. Their native range includes most of the eastern United States, extending as far south as Texas and Florida's mainland and north into southern Canada.

Spring peepers are woodland frogs, but they must live near water because that is where the females lay their eggs, according to the Missouri Department of Conservation. They breed in ponds, ditches, swamps and freshwater pools, preferring waters without fish. After breeding, they retreat to the wooded areas surrounding the water.

Spring peepers are insectivores, eating all manner of flies, beetles, ants and spiders. While some frogs and other animals prefer certain types of insects, this isn't the case with spring peepers, according to the Animal Diversity Web. They simply eat the insects that are available to them.

Spring peepers mainly eat insects, which helps keep these populations from getting out of control, the Animal Diversity Web reports. These frogs are also preyed upon by some animals, especially in their larval stage, so they serve as an important food source in some habitats.

In addition, amphibians have permeable skin that makes them very vulnerable to toxins and other pollutants in their environment. Because of this, the presence of frogs and other amphibians is viewed as an indication that the habitat is clean and healthy.