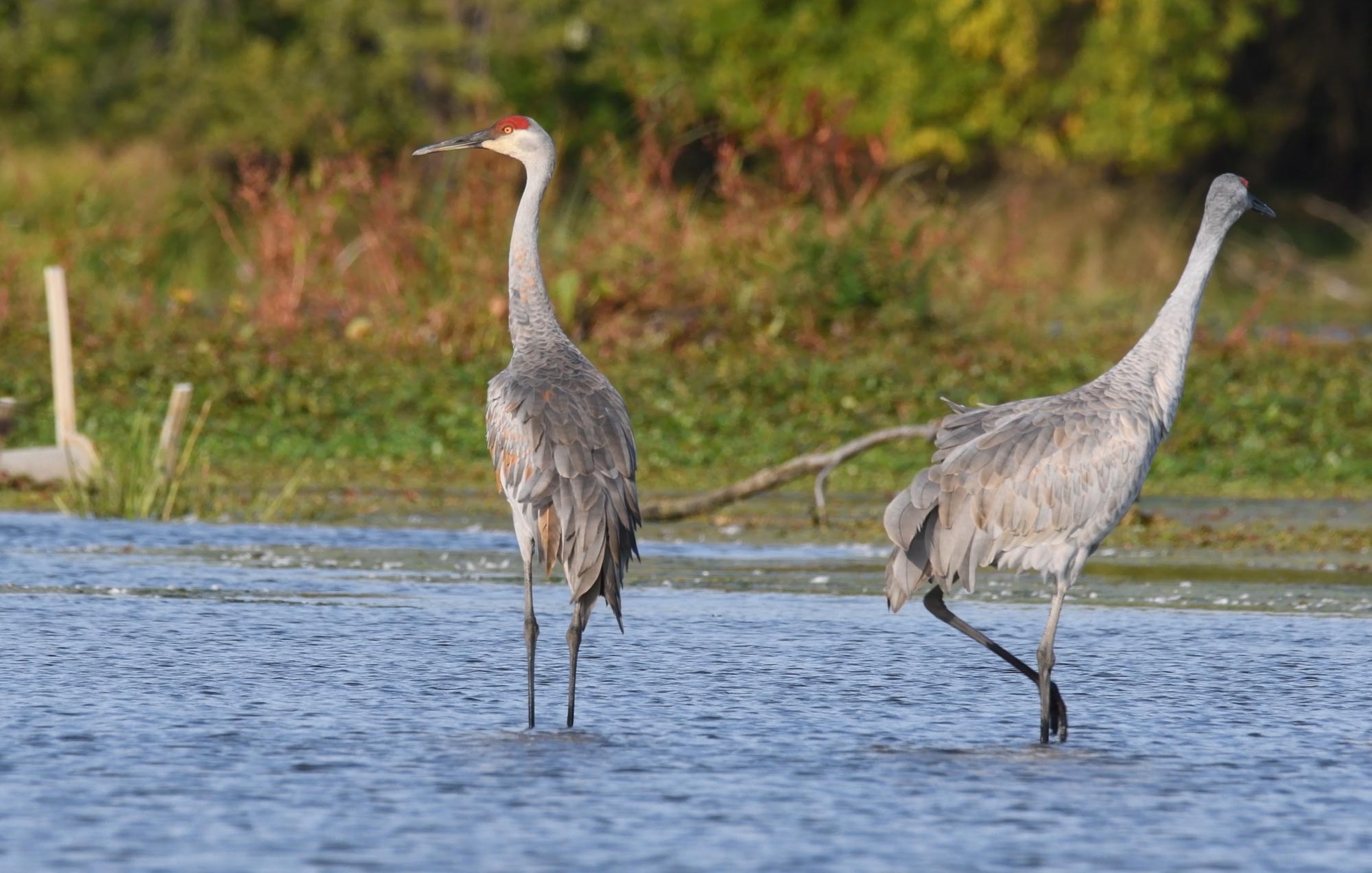 Sandhill cranes are a magnificent sight, whether flying overhead or congregating in prairies and fields, but we often realize the birds are nearby because we hear them before we see them.

The loud, trumpeting call that is one of the hallmarks of the sandhill crane is owed to its anatomy. The birds have long tracheas coiled in their sternums, which creates a call with a low, rich pitch.

In our area, sandhill cranes are a common site – and sound – in the spring and fall, during their annual migrations. Not too far away, in Medaryville, Indiana, is one of the stopover points in the cranes’ fall migration. Thousands of the birds take respite at the shallow marshes at the Jasper-Pulaski Fish and Wildlife Area every autumn. The birds typically begin arriving in late September and stick around through December, but they hit their peak numbers in mid-November.

Sandhills belong to the crane family of birds. Of the 15 crane species in the world, only two – the sandhill and the whooping crane — are found in North America.

Cranes are among the oldest animals on the planet, dating back to the Eocene era, which ended 34 million years ago. The sandhill crane has existed as it does today for about 10 million years.

Here’s a closer look at these beautiful birds.

Sandhill cranes are named for the Sandhills region of Nebraska, according to the U.S. Fish and Wildlife Service. The Sandhills stretch across 265 miles of Nebraska and are the largest sand dune formations in the Western Hemisphere. They were formed decades ago by blowing sand but are now covered with grass and other vegetation.

A separate area of Nebraska, the central Platte River valley, is a staging ground for hundreds of thousands of sandhill cranes. Each year from about mid-February to April, about 500,000 cranes use the river valley as a stopover on their migration north, roosting in the shallow river waters and feeding in the meadows and fields.

The cranes have been migrating through the river valley for thousands of years, and it’s one of the last great migrations on Earth, National Geographic reports.

Sandhill cranes are regarded for their elegance. These tall birds have bulky bodies, but they get their height from their long necks and legs, according to the Cornell Lab of Ornithology. Their plumage is mostly gray, with some tan feathers mixed in on their bodies. The rear of their bodies has a bustle of feathers that drops off the back end.

Their necks are typically white, and they are easily identifiable by the crimson red patches on their foreheads. In flight, sandhill cranes have an impressive wingspan that generally ranges between 5 feet and 6 feet.

Unlike many other birds that use the cover of trees, sandhill cranes prefer open spaces. They typically breed in open wetland areas and nest in habitats with standing water, such as marshes, bogs, wet meadows and prairies, according to the Cornell Lab.

During their migration, they most often congregate in open prairies and agricultural land near shallow river valleys, because it provides access to both the shallow water they prefer and easy feeding sites.

Sandhill cranes are omnivores, and their diet varies based on the season and their location. Major food sources include insects and the roots of aquatic plants, but they also eat small rodents, nesting birds, reptiles and amphibians as well as berries and seeds.