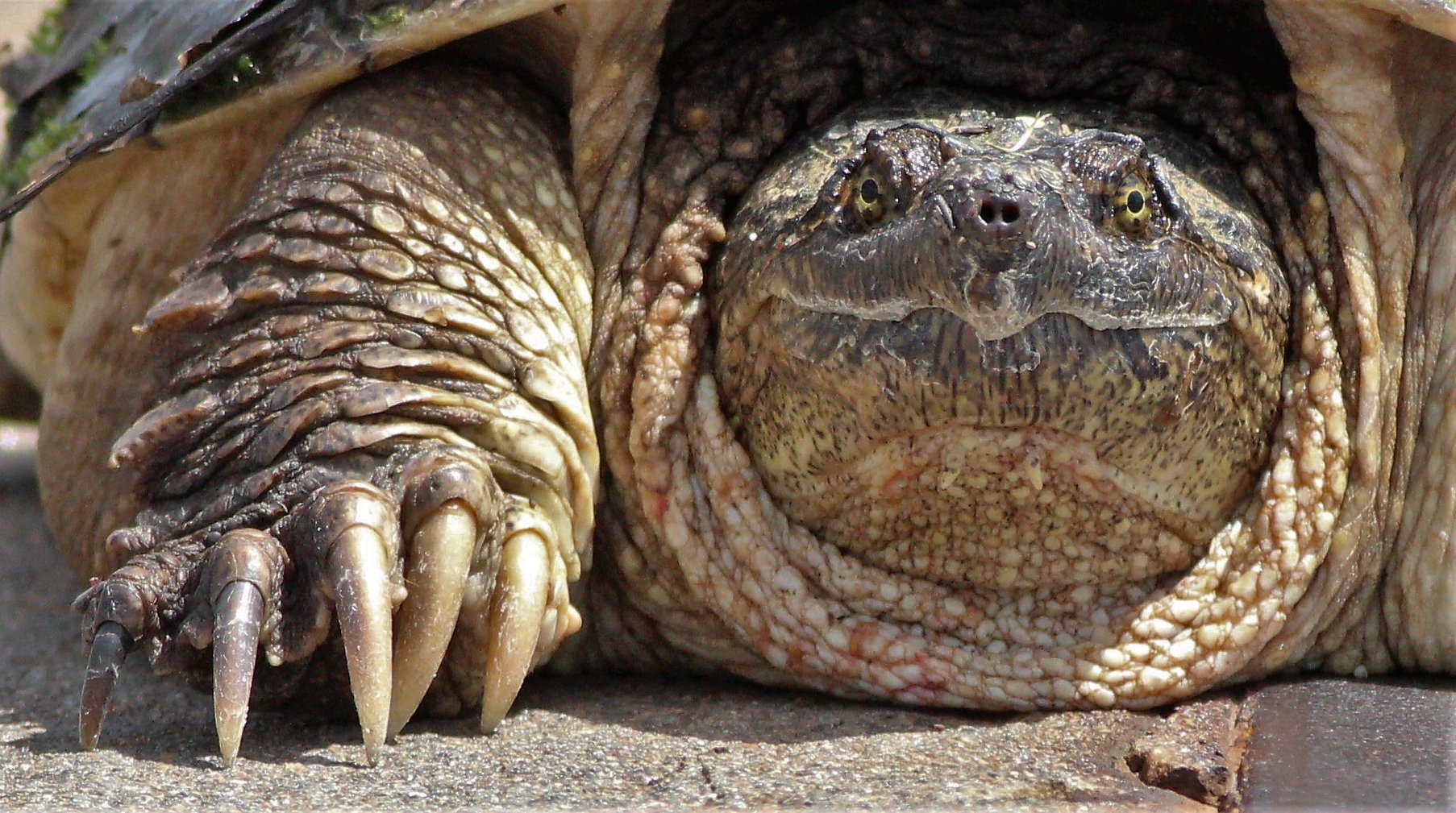 Common snapping turtles are one of several hundred turtle species worldwide, but snappers live only in North and South America.

These turtles, one of 17 turtles that live in Illinois, are among only a few of the animals in our area that don't have many predators, but that doesn't mean they don't face risks.

Cars also pose a danger to snapping turtles, and other turtles as well. While snappers spend the majority of their time in the water, they do come on land to breed and nest. While traveling to nesting sites, they are in danger of being hit by cars, which they can't easily escape because of their slow speed.

In addition to the common snapping turtle, Illinois is also home to a second snapping turtle species, the alligator snapping turtle. These turtles are bigger, weighing up to 150 pounds, and live only in the southern part of the state, in the Illinois, Mississippi, Ohio and Wabash rivers, according to the Illinois Department of Natural Resources.

Snapping turtles are named for the bite of their powerful jaws. And while these turtles do have strong bites, it may be a bit overstated. According to a study published in the Journal of Evolutionary Biology in 2002, a snapping turtle's bite measures between 208 Newtons and 226 Newtons of force, weaker than a human bite, which can register between 300 Newtons and 700 Newtons when biting with our molars.

We often think of turtles as being green, and while snapping turtles can be green, their color can range from various shades of green to brown to black. Their shells, which are part of their skeleton, often grow moss on them, adding to their camouflaging ability, according to the Connecticut Department of Energy and Environmental Protection.

Adults snappers have shells, also called carapaces, ranging from 8 to 12 inches long, and they can weigh between 10 pounds and 35 pounds, the Burke Museum reports. They also have long, spiky tails, in some cases even longer than their shells.

Snapping turtles have large heads, long necks and a sharp, hooked jaw that they can use for tearing into food. Because they are big and have small plastrons, the plates covering their abdomens, they cannot retract their heads and legs into their shells like many other turtles.

Snapping turtles are freshwater turtles, although they are also sometimes found in brackish water, which is a mixture of fresh and salt water. They like slow-moving bodies of water with muddy or sandy bottoms, and they do best in bodies of water surrounded by plenty of vegetation, which gives them places to shelter and hide, according to the University of Michigan.

Unlike most turtles, snappers spend nearly all of their time in the water. They do go on land to lay eggs, which they typically do in sandy areas or places with sandy soil. In our area, June is the typical mating and nesting season, so we often see more snapping turtles out of the water around this time.

Snapping turtles are not picky about their food sources and will eat almost anything they can catch, including both plants and animals. Plant material such as aquatic leaves and grasses and algae account for about a third of their diet, the Connecticut Department of Energy and Environmental Protection states. The remaining portion of their diet comes from animal sources, including fish, frogs, snakes, birds, small mammals, insects, carrion and even other turtles. 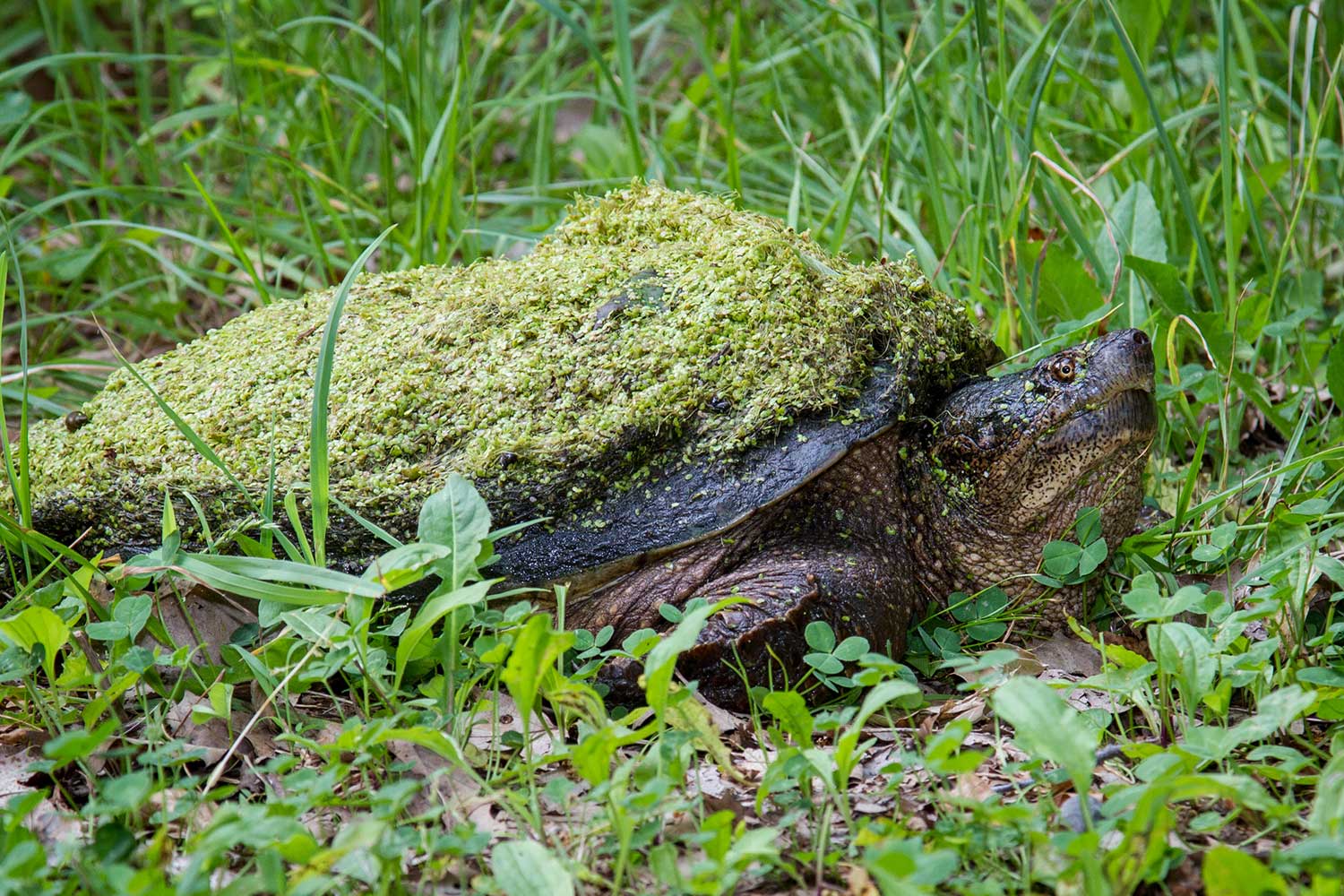 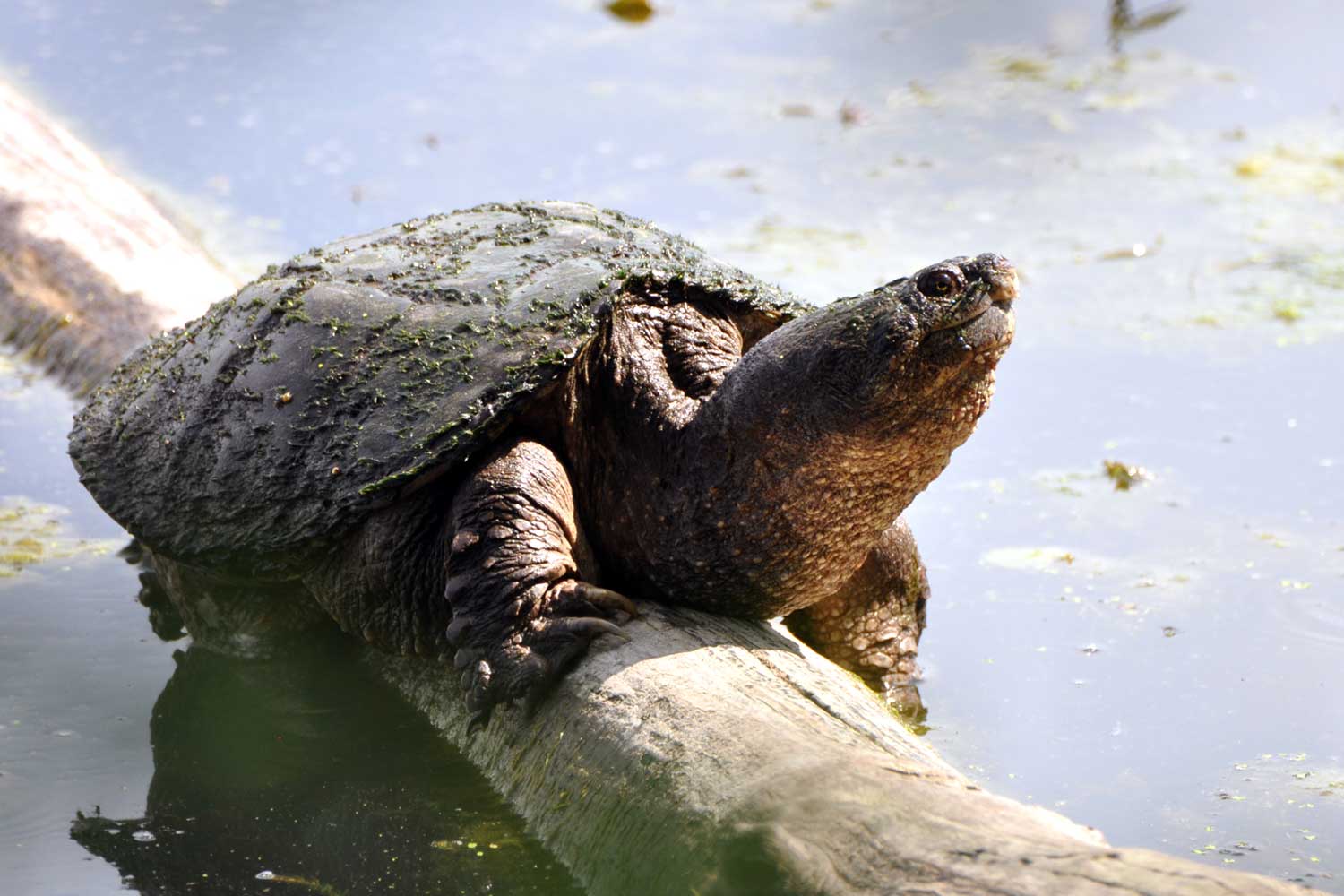 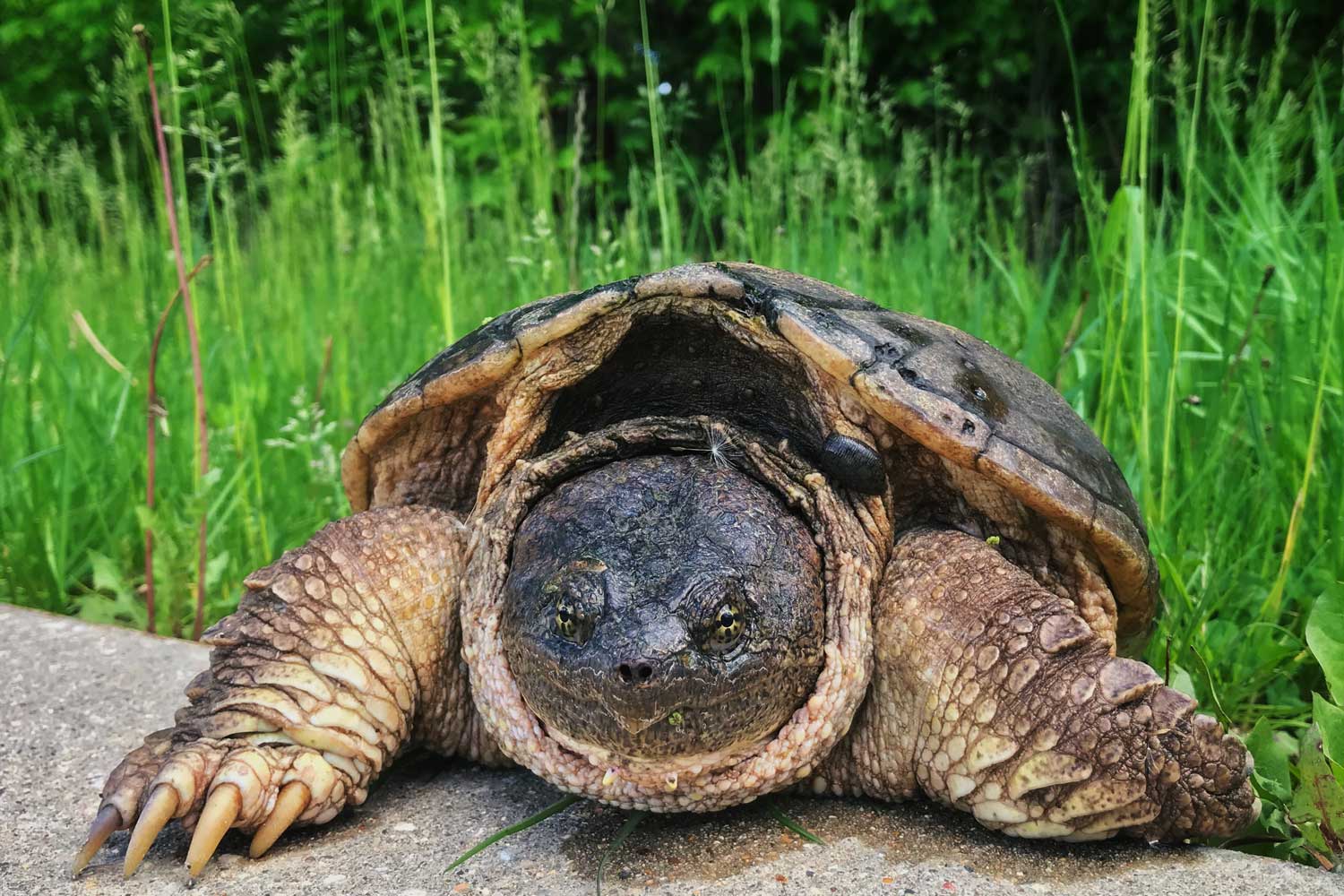 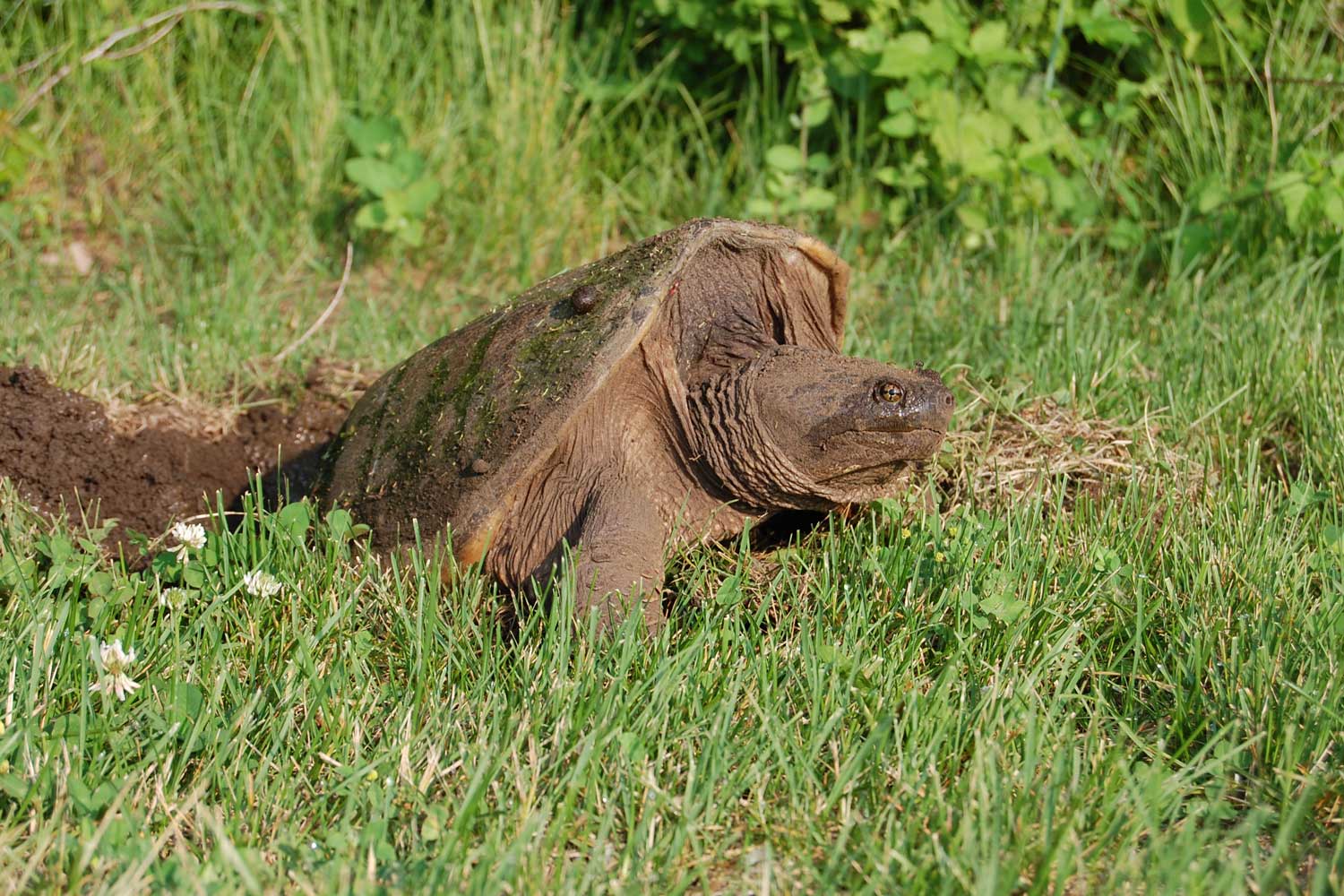 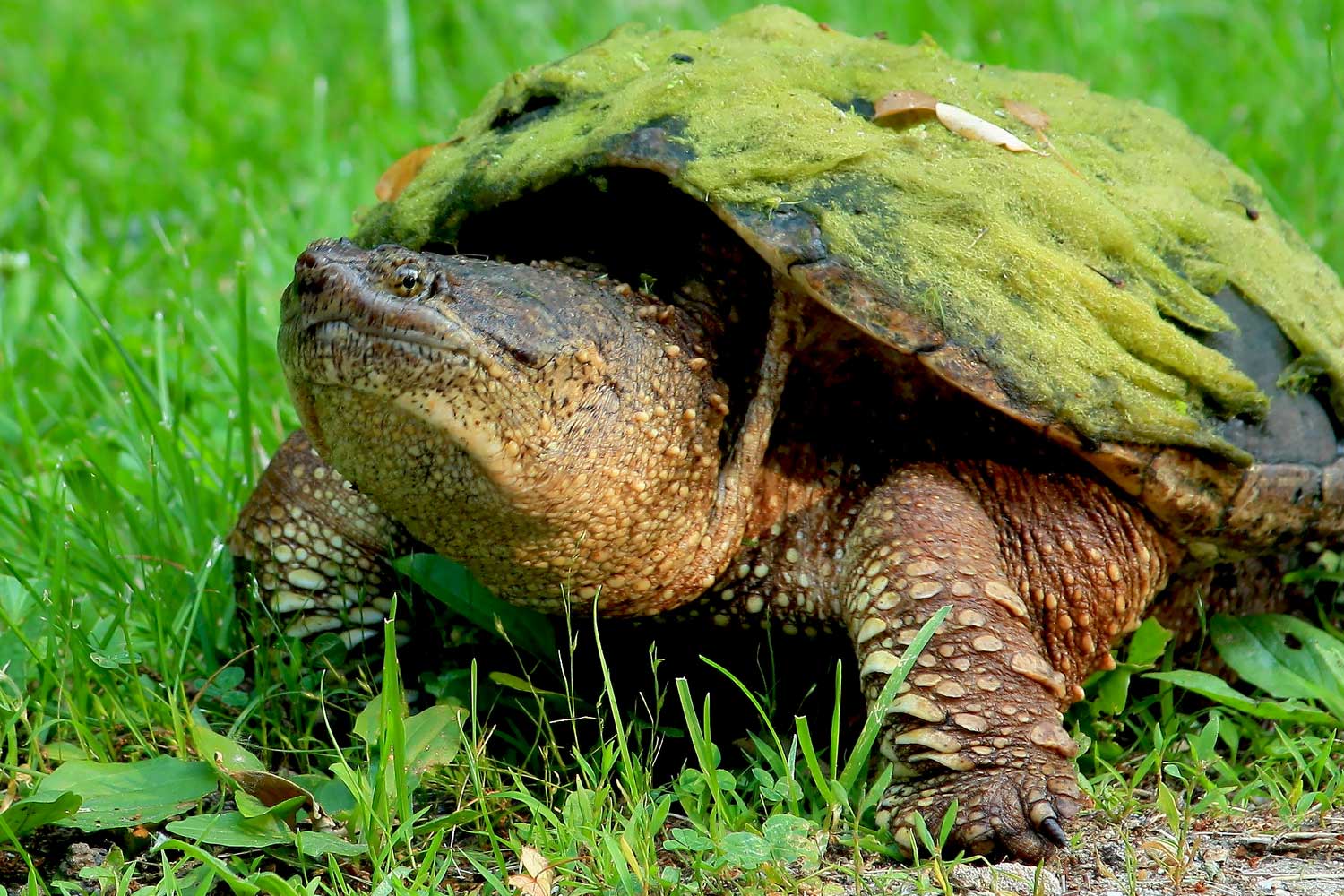