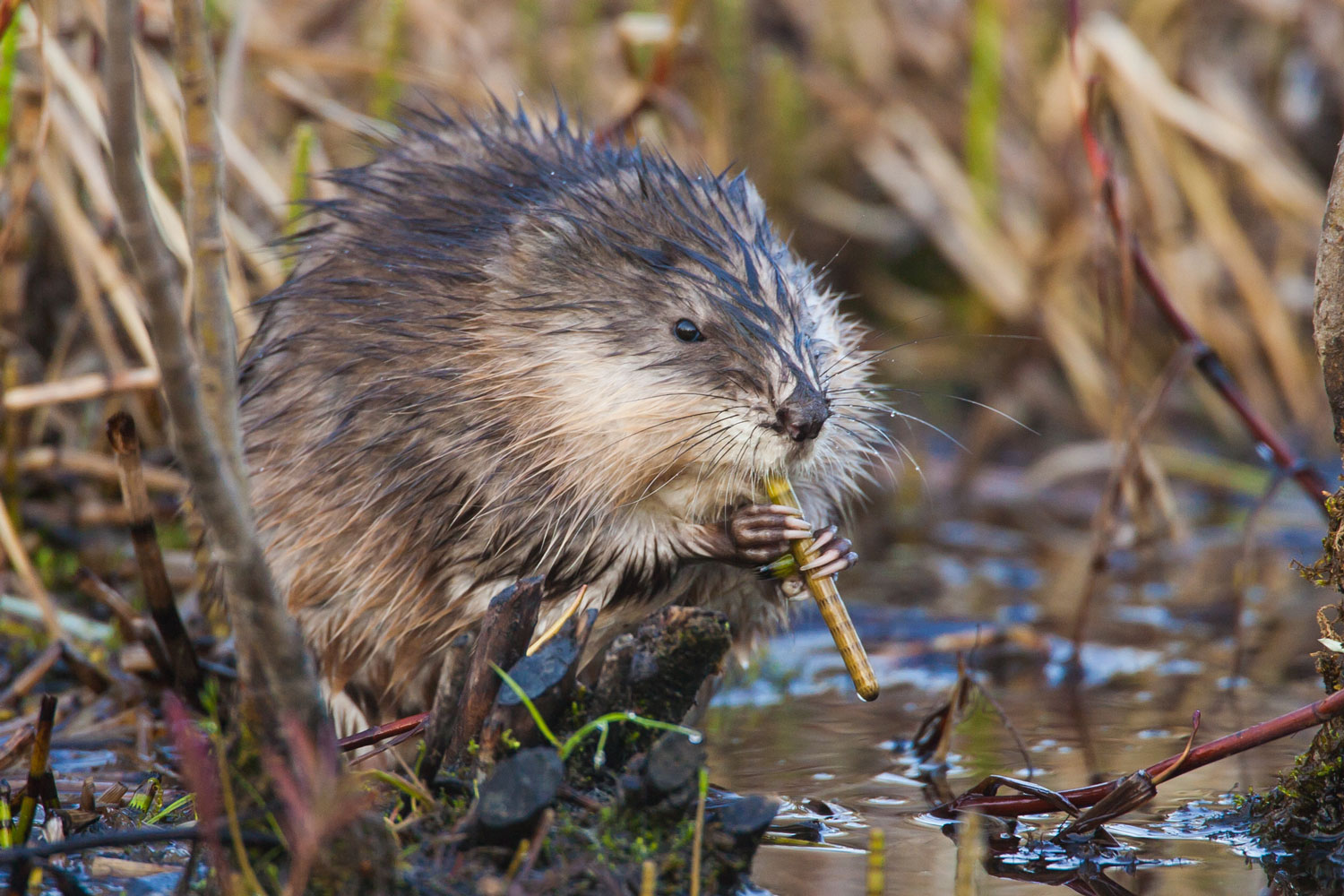 Muskrats might be best known for the love-it-or-hate-it 1970s hit song "Muskrat Love," but they're also a common inhabitant of the aquatic environments across Illinois and the United States.

Despite being common, muskrats aren't seen as often as other mammals we frequently see in our area. Most muskrats never venture too far from their homes, spending most of their time within just a few hundred feet of their dens, according to the Illinois Department of Natural Resources.

Here's some more information about these creatures.

Muskrats got their common name based on both their appearance and their behavior. They are rodents, closely related to rats and mice, which explains the second part of their common name. The "musk" reference relates to their behavior, because the animals produce a strong musky odor during mating season that they use to mark their territories, according to the Indiana Department of Natural Resources.

Muskrats are closely related to rats and mice, but they are often said to look like small beavers. They are similar in size to cottontail rabbits, ranging from about 16 inches to 25 inches and weighing between 1 1/2 to 4 pounds, according to the Illinois Department of Natural Resources.

They have brown fur on their backs, but it is lighter on the sides and very light, almost white, underneath, according to the Illinois Department of Natural Resources. Muskrat fur is a darker shade of brown in the winter months and lighter during the summer.

Their tails are black and scaly and hang down vertically like a rudder when they are in water. They have big feet, and their back feet are slightly webbed. Their tails and feet aid their swimming ability, and they can reach speeds of up to 3 mph in the water, according to the University of Michigan's Animal Diversity Web.

These rodents are semi-aquatic and spend most of their time in the water. Their preferred habitat is marshes, because water levels are consistent and they also provide an ample food supply, according to the Animal Diversity Web. Besides marshes, they can also be found in and around swamps, wetlands, rivers, streams, lakes and ponds.

Muskrats are native to North America, and their population is widespread and abundant through much of the United States and parts of Canada and Mexico. They are found in every county in Illinois, although their population is higher in the northern part of the state, IDNR reports. Their population can fluctuate drastically from year to year because of harsh weather conditions like flooding, drought and extreme cold as well as illness.

Muskrats are mostly plant eaters, but they are classified as omnivores because they also sometimes eat aquatic animals such as crayfish, fish, frogs and freshwater clams, according to IDNR. Cattails are a particular favorite, but the plants they favor varies based on their habitat. In marshy areas, they eat stems and roots of cattails, bulrush, duckweed water lily and arrowhead, while they favor grasses, clover and corn in more agricultural areas.

In warmer months, their favored plants are readily available, but in winter they must swim for it. Luckily, they are able to stay under water for as long as 15 minutes at a time!

Because muskrats are omnivores, they help control the populations of the plants and animals they eat, according to the Missouri Department of Conservation. They are an important part of the food web because they are hunted by many other animals, including minks, raccoons and coyotes.

Muskrats build tunnels and canals into their underground dens, and their handiwork often also becomes a habitat for other animals living nearby. In addition, turtles, snakes and even ducks often rest on the platforms they build in the water, according to the University of Illinois Extension.