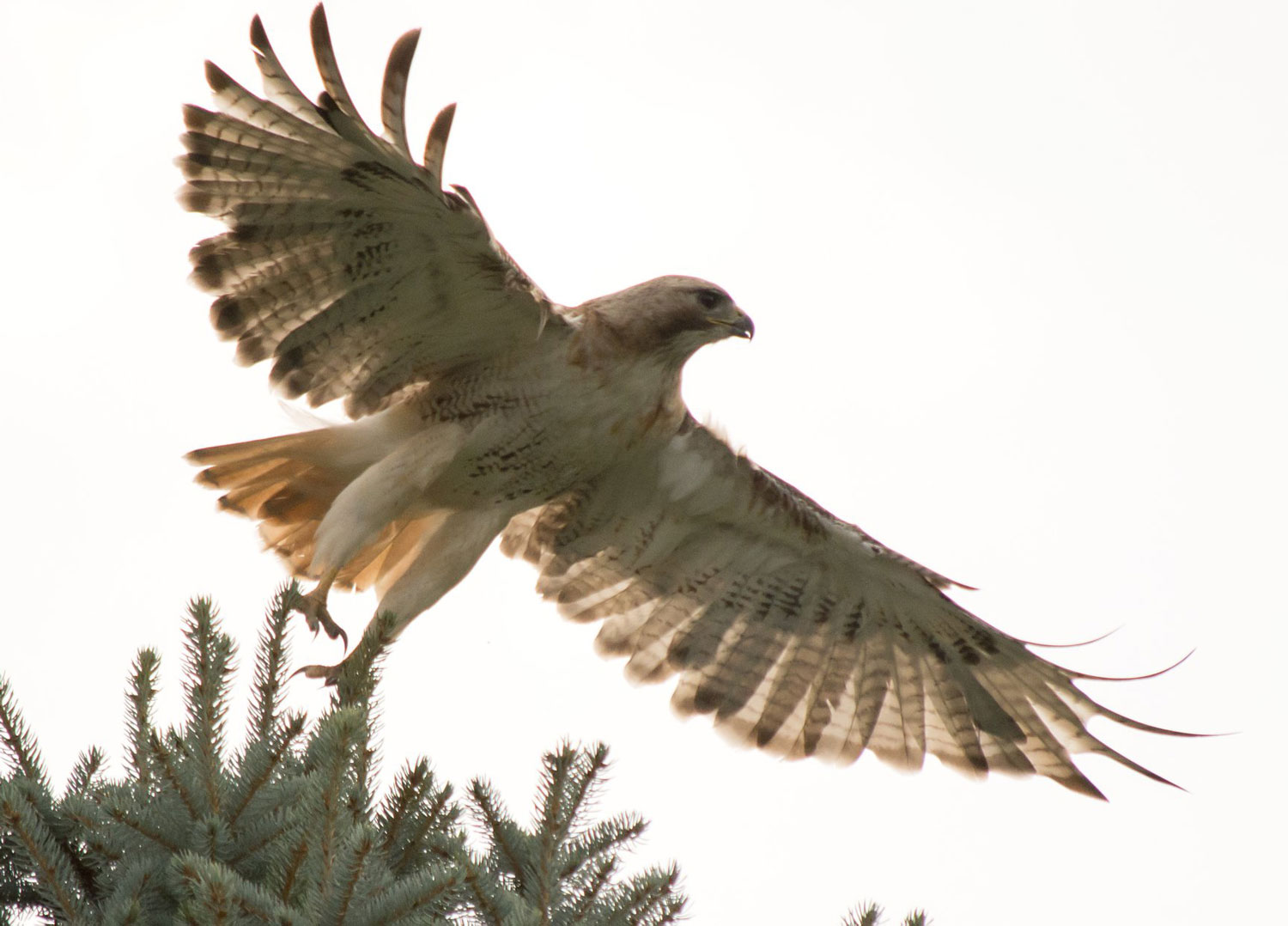 A red-tailed hawk taking off. (Photo courtesy of Eileen Capodice)

Hawks can be difficult to distinguish from one another, but if you see one soaring overhead or perched on a light pole or fencepost there's a good chance it's a red-tailed hawk.

These hawks are the most familiar and common throughout the majority of North America, a frequent sight both flying high above and sitting atop posts and poles with their eyes looking down for their next meal, according to the National Audubon Society.

Red-tailed hawks are obviously named for their tail plumage, although the red color is more subtle than the fire-engine red the name might imply. When viewed from the top, these hawks have a tail that is cinnamon red in color. From underneath, the tail feathers are more pale-colored, according to the Cornell University Lab of Ornithology.

The red-tailed hawk is a large hawk with a wide but short tail and broad wings that span about 4 feet. Despite their large size, they typically weigh only 3 pounds at most and stand between 18 and 25 inches tall. The female hawks are larger than the males.

Plumage colors among red-tailed hawks can vary considerably, especially west of the Mississippi River, although the trademark red tail is consistent, according to the Audubon Society. Generally, these hawks are a darkish brown or reddish brown when viewed from above and more pale from below because of their white underbellies. As with other birds as well, the dark, chocolate brown hawks are called "dark morph," while the more reddish brown birds are called "Rufous morph."

These birds prefer open areas, including both grasslands and woodlands. They live all across North America in just about every type of habitat, from deserts to tropical rainforests in Mexico. A common site in fields and pastures and along roadsides, red-tailed hawks are also at home in urban and suburban areas.

Red-tailed hawks nest high up in tall trees or atop other tall structures, such as cliffs, billboards or even the high arm of a cactus, providing a good view of the surrounding landscape. A red-tailed hawk's nest usually has two to three eggs. The females stay with the young birds after they hatch, and the males bring food to the nest.

The hawks are carnivores and mostly hunt small mammals, according to the Cornell Lab. Among their most-frequent targets are mice, voles, wood rats, rabbits and ground squirrels. They also eat reptiles, most often snakes, as well as other birds, including those up to the size of a pheasant.

Red-tailed hawks do not use carrion, or dead animals, as a major part of their diet, but they do sometimes feast on animal carcasses. These birds can hunt animals larger than them, up to about 5 pounds. 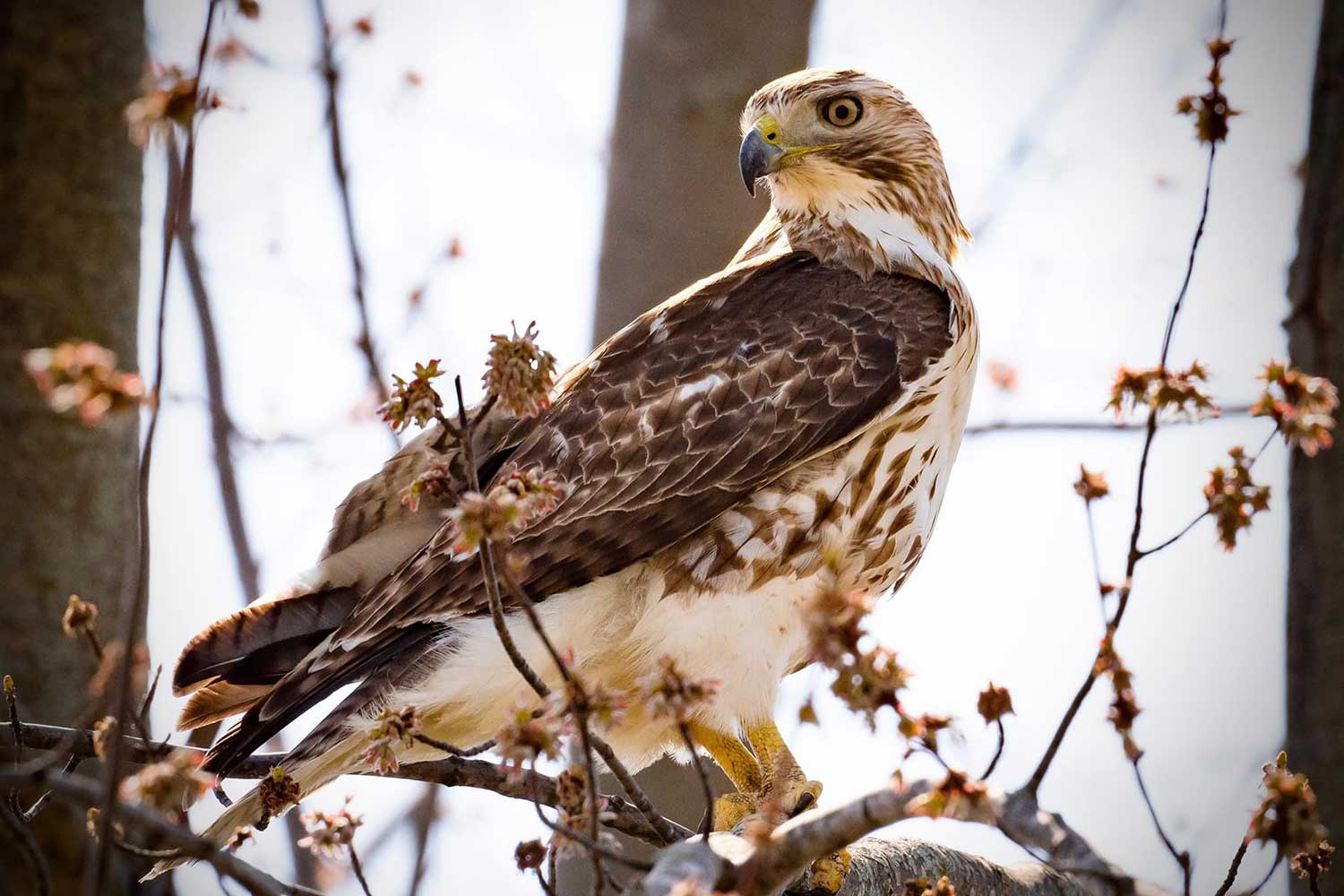 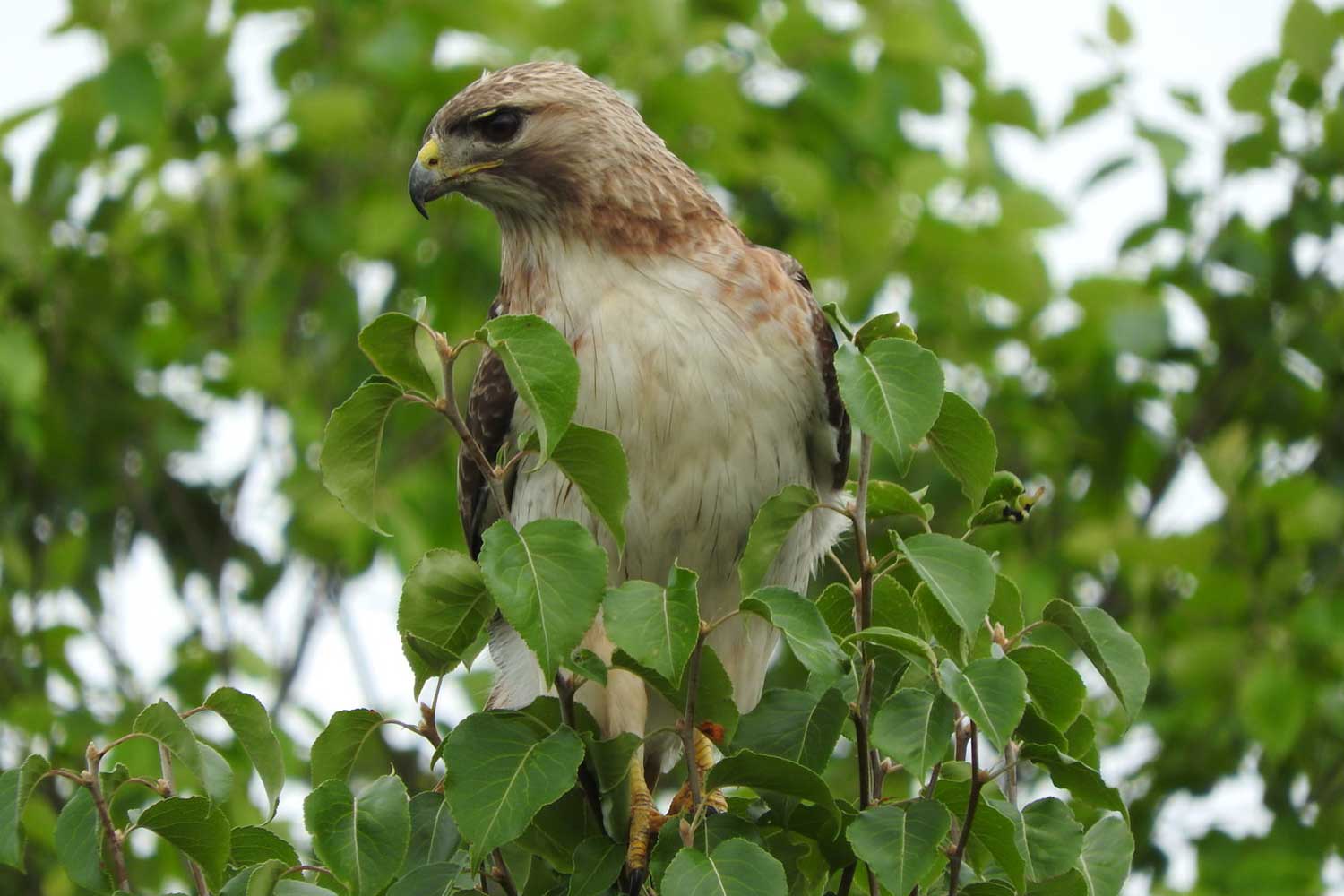 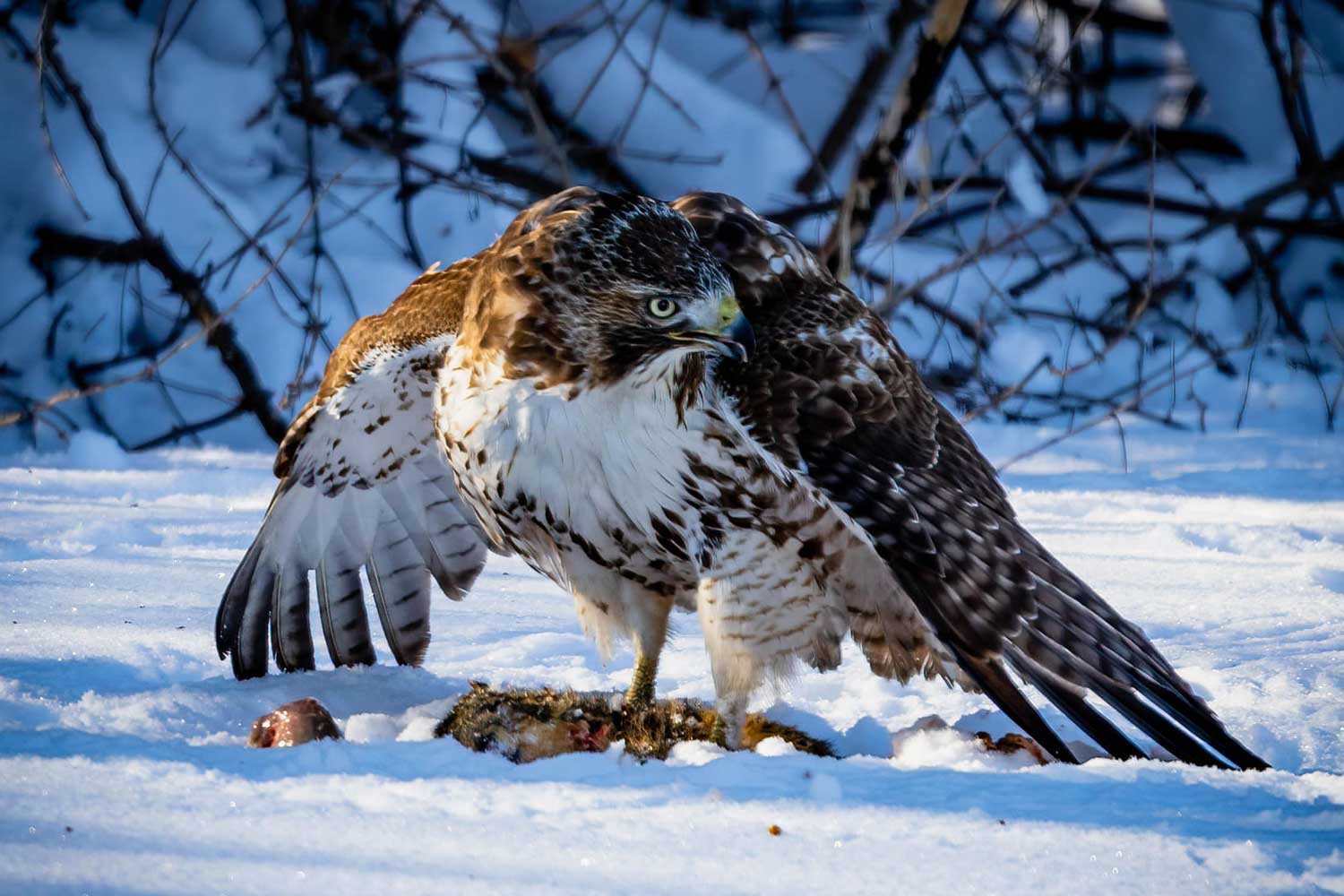 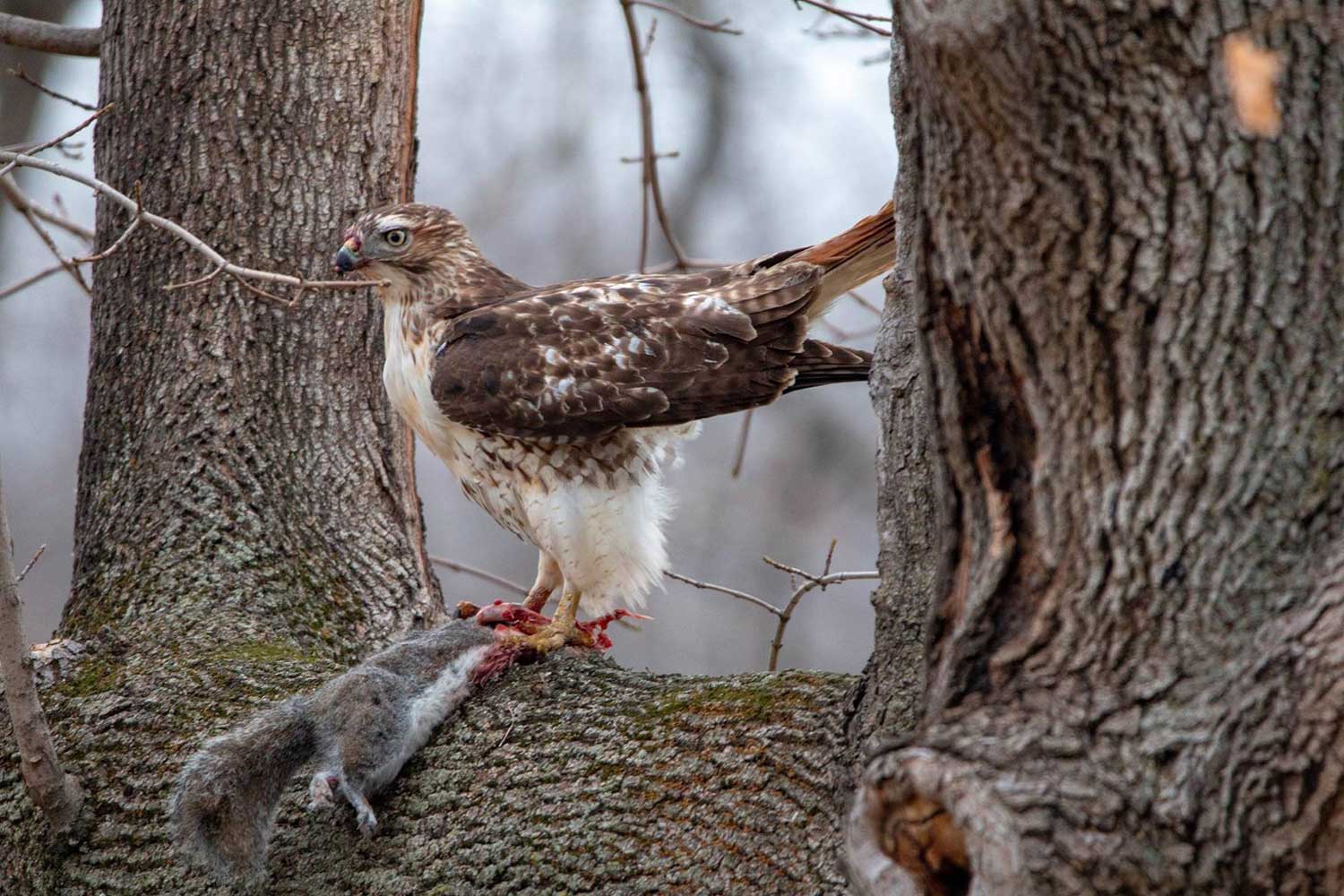 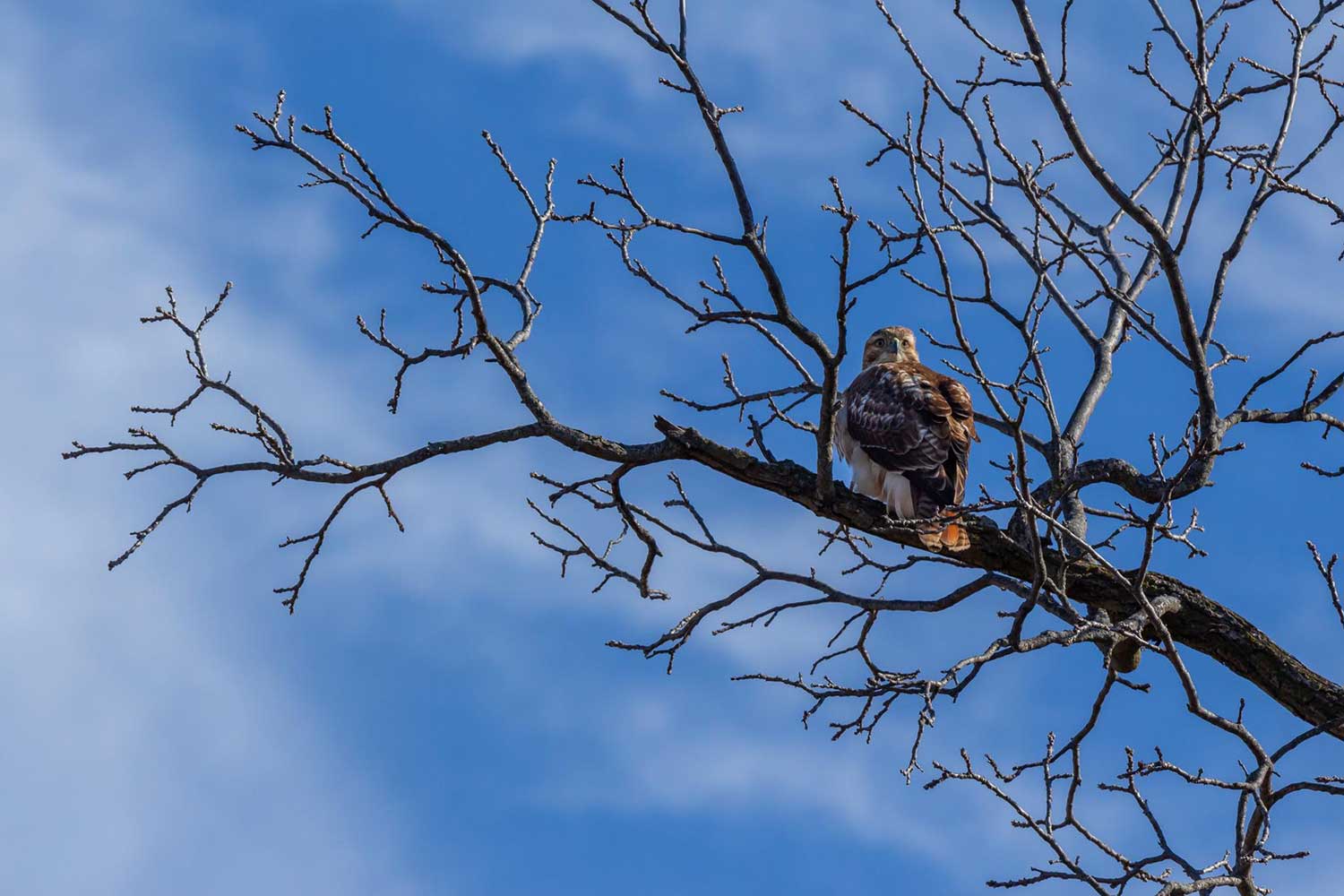