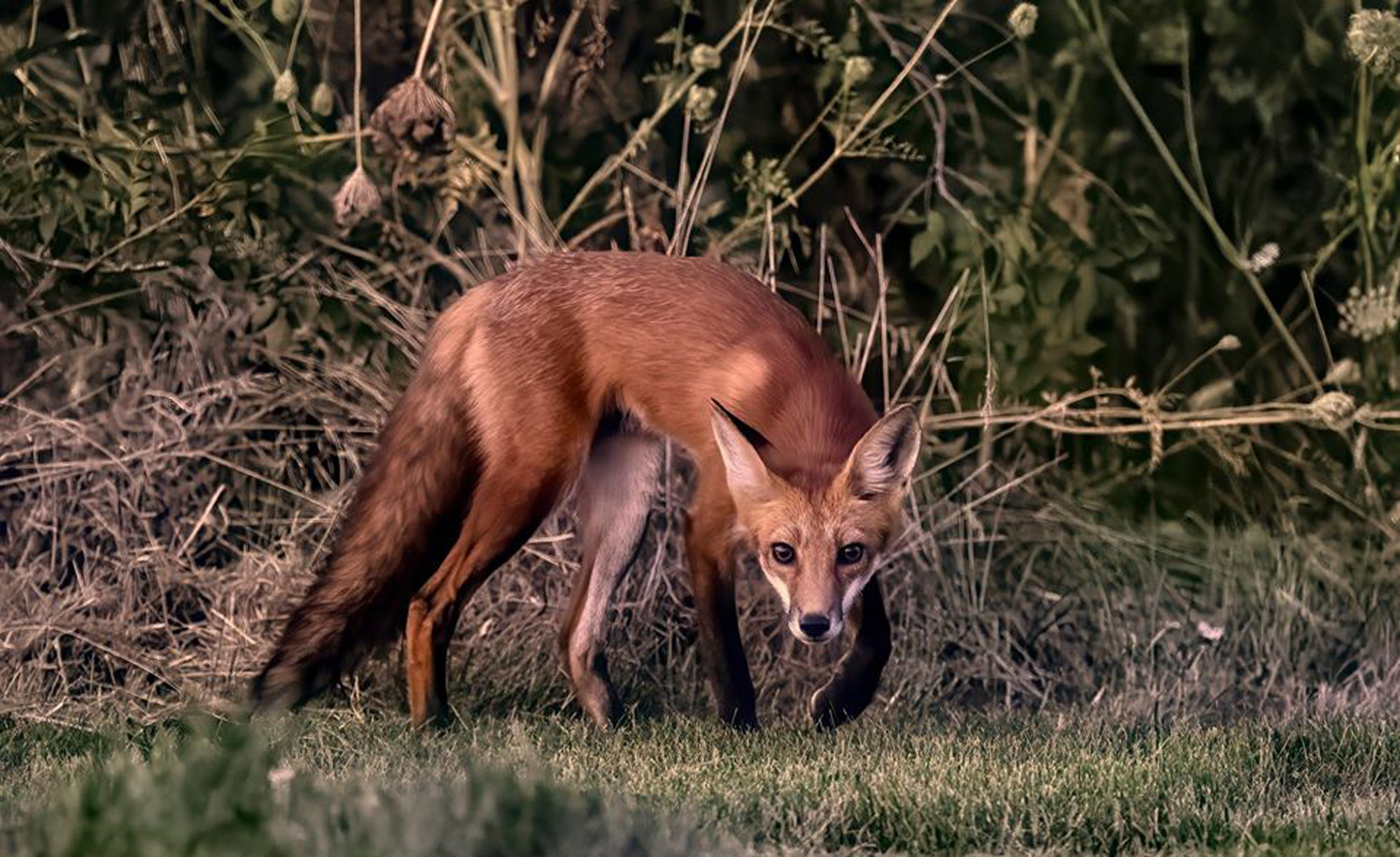 Telling someone they are as sly as a fox is not always meant as a compliment, but in the animal kingdom a red fox’s cunning and cleverness serve it well.

These sly creatures are skilled hunters and adaptable to many habitats and environments, including rural, suburban and urban areas, according to the Illinois Department of Natural Resources.

Red foxes are most active at night, when they do their hunting, but it’s not uncommon to see them in the early morning or evening hours. They often rest in forested or otherwise hidden areas during the day.

Here’s a closer look at these crafty creatures that live among us.

Red foxes are named for their physical appearance — the reddish-orange fur that covers their heads, backs and sides. These foxes aren’t entirely red, however.  Their necks and chests are usually white or grayish-white, and the fur on their legs is often gray or black. Some red foxes also have patches of gray fur, the National Wildlife Federation reports.

Red foxes typically stand about 2 feet tall and are about 3 feet long, according to the Indiana Department of Natural Resources. The weight of a red fox can vary greatly, from about 6.5 pounds to 20 pounds. The males are typically larger than the females.

Because they can survive in diverse habitats, including deserts, forests, mountains and grasslands, red foxes live all across the world, according to National Geographic. In the United States, they can be found in all the continental states and Alaska, although they are not common in the desert areas of the Southwest.

Red foxes live across Illinois, but they are most common in the northern two-thirds of the state, the Illinois Department of Natural Resources reports. While red foxes prefer open and lightly forested areas, they adapt well to areas where humans live.

Red foxes have a varied diet based on what is readily available in their environment. Their preferred food is rabbits and rodents, but they also eat birds; frogs, toads and other amphibians; and fruit, according to the National Wildlife Federation.

Unlike many mammals, foxes have a keen sense of hearing that allows them to hear low-frequency sounds. They can even hear rodents digging underground. They typically eat about 1 pound of meat at each feeding, but they often kill more than they can eat, the Illinois Department of Natural Resources reports. Any extra food left over after eating is either buried or covered with plant material, and they mark it with their urine. However, they do not always return to eat these buried surpluses.

Red foxes are mostly solitary, although they live in family groups for breeding. They don’t have permanent homes except while raising their young, when they build dens where the mother can care for the pups. Foxes mate in the winter, and the female gives birth in the spring, usually late March or early April. A litter of pups can range in size from two up to 12, according to National Geographic.

The mothers do most of the caring for the pups, which are born blind. The pups have gray fur when they are born, but it turns rusty red after about a month. The male foxes often hunt for food for the mothers and newborns, but the mothers also sometimes hunt for their pups.

After about four or five weeks, the pups start to venture outside of the den, spending more and more time outside the entrance to become acclimated with their environment, the Illinois Department of Natural Resources reports. At about 8 to 10 weeks old, the pups start taking short trips with their parents. At about 4 to 5 months old, they start to fend for themselves, but only within a short distance of their parents. In the fall after their birth, they strike out on their own.

Foxes can communicate with one another in several ways. Although they are usually silent, they use dozens of calls and sounds to signal to other foxes. They also make scent posts by urinating on trees, fences, rocks or other structures to signal their presence, National Geographic reports.