Five things about those boisterous bullfrogs 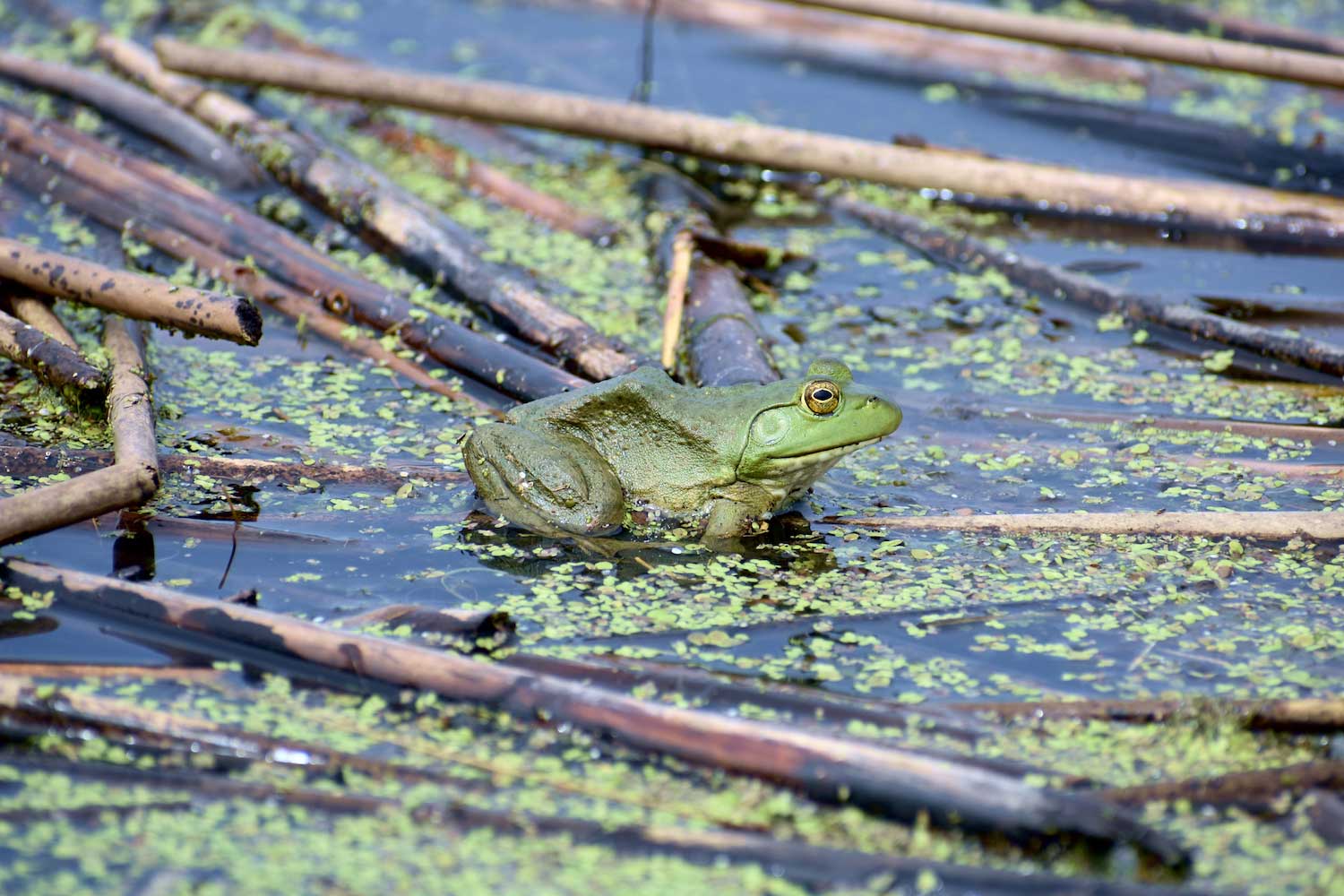 The biggest frog in Illinois and all of North America, the American bullfrog, is a pretty common sight along the water's edge, but it can be hard to get a good look at them because they are notoriously wary, leaping into the safety of the water before people — and other potential dangers — get too close.

These big frogs are typically between 3 1/2 inches and 6 inches long and can weigh more than a pound, according to Animal Diversity Web. They can live in nearly any place with a permanent water source nearby, but prefer warm, shallow waters. They are omnivores, but mostly rely on other animals for their source of food. They aren't picky. They will eat any animal they can catch and swallow.

Frogs and other amphibians are typically sensitive to changes in their environment because they have porous skin, but bullfrogs are less susceptible to these changes and better tolerate human modifications to habitat areas than most amphibians, Animal Diversity Web reports. Because of their ability to tolerate changes in their habitat, they are outcompeting native frogs in some areas where they have been introduced.

Read on to learn much more about the American bullfrog.

Their jumping ability is no joke

If you've ever walked along the edge of a lake or a pond, you've probably seen frogs and toads leaping into the water to escape danger as you approach. How far bullfrogs can leap is pretty impressive. These frogs can jump 6 feet without much difficulty, the Washington NatureMapping Program reports. Longer jumps aren't unheard of either. Most of their jumps aren't quite so spectacular, however. On average, their jumps measure about 3 feet.

Bullfrogs are among the best jumping frogs in the world, partly due to their large size compared to most frogs. In some places, bullfrogs are used for frog racing and frog-leaping contests, Animal Diversity Web reports. One of the most famous frog-jumping contests in the world is the Calaveras County Jumping Frog Jubilee, held each year at the Calaveras County Fair in Angels Camp, California. In the Jumping Frog Jubilee, each frog and its jockey are allowed three jumps. The world record — yes, there is a world record — at the event was set back in 1986, when "Rosie the Riveter," under the guidance of jockey Lee Giudici, leaped a total of 21 feet, 5 3/4 inches, or an average of 7.16 feet per jump, Smithsonian magazine reports.

They are very loud

As a kid, you probably learned that frogs ribbit, but bullfrogs got their common name because their call is said to sound like that of a mooing cow or bull. It's probably unlikely you would confuse a cow's moo with a bullfrog's call, though. A more appropriate description of what a bullfrog sounds like is the call "jug-o-rum" or "br-wum."

No matter what you think when you hear them calling, you can hear them up to a half-mile and sometimes even farther from where they are, the Missouri Department of Conservation reports. That means a chorus of bullfrogs may be part of your nocturnal soundtrack even if you don't live that close to water.

Only male bullfrogs croak, and they do it for the same reason many other male animals make a ruckus: to establish their territory and attract a mate, according to the National Park Service. To croak, male bullfrogs breathe air in, then close their nostrils. After inhaling, they move the air backward and forward between their lungs and their vocal sac, which creates the sound we are so familiar with.

You probably know that frogs are tadpoles before they transform into adult frogs. And you might even know that before they are tadpoles, frogs start as eggs. But did you know it can take up to three years for those eggs to become mature frogs?

The first part of their life cycle happens quickly. The tadpoles hatch from jelly-like eggs after about four days, Animal Diversity Web reports. The transformation from tadpole to frog can take years, however. Over the course of a year or two, the tadpoles will grow to be 4 inches to 6 inches long before finally transforming into a frog.

The longer it takes for a tadpole to fully transform into an adult frog, the bigger the frog will be, PBS reports. Through the full course of their life cycle, bullfrogs can live more than 10 years in the wild, but their average lifespan is five to six years.

The females can lay thousands of eggs

The large number of eggs is necessary to help ensure some of the eggs hatch and some of the resulting tadpoles survive into adulthood. Frog eggs are vulnerable for many reasons. First, they are a welcome food source for many aquatic animals, Amphibian Life reports. The eggs also must remain wet or they will shrivel up and the tadpoles won't hatch. Plus, frog eggs are fertilized after they are laid, so some may never be fertilized and have a chance of hatching.

The hatch rate for bullfrog eggs varies based on these factors, but a rough estimate is that about 1 in 50 eggs hatches into a tadpole, Amphibian Life reports. So of those 20,000 eggs, only about 400 will grow to be tadpoles — only about a 2% success rate. But those 400 tadpoles won't all necessarily become frogs either. Just like the eggs, tadpoles are also eaten by many other animals as well.

It's easy to tell males and females apart

It's not always so easy to tell male animals from their female counterparts, but in bullfrogs it's actually not that difficult based on two anatomical features. The easiest way to distinguish male and female bullfrogs is their tympanum, which is an external eardrum. The tympanum is located right behind the frog's eye, and using their eye for size comparison is a good way to tell if you are seeing a male or female bullfrog. In females, the tympanum will be about the same size as the eye, according to the Washington NatureMapping Program. In male bullfrogs, the tympanum will be much larger than their eye.

During breeding season, their throats are also a distinguishing characteristic. Males have yellow throats during breeding season, and females have white throats, Animal Diversity Web reports. And of course, if you hear a bullfrog calling out it's famous "jug-o-rum," you'll know it's a male because only male bullfrogs call. In addition, as with most frog species, males are smaller than females, although this may not be easy to distinguish just by looking at a frog.