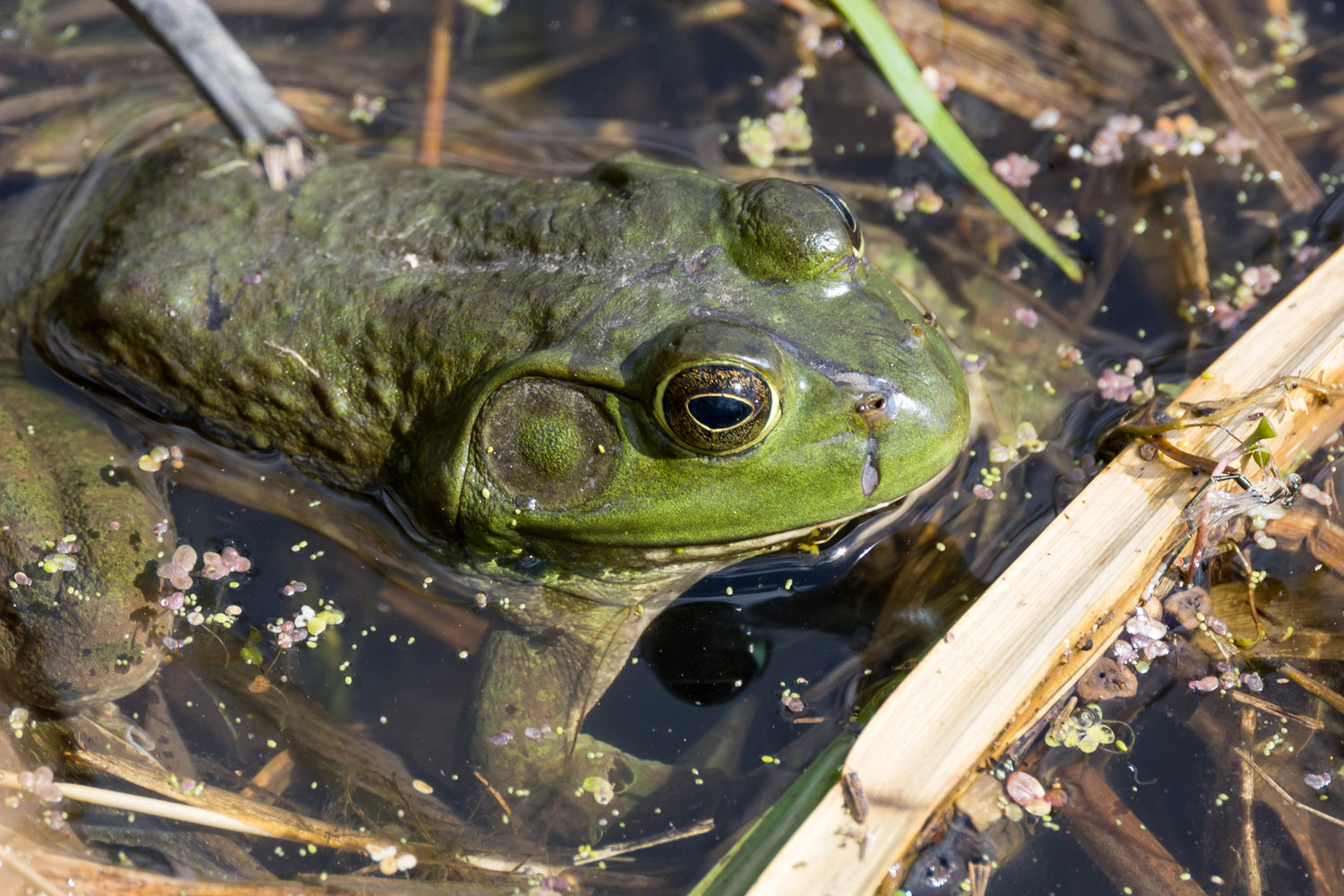 Jeremiah is the most famous bullfrog of all, but the bullfrogs that populate our local lakes and ponds are worthy of attention too.

American bullfrogs are native to the eastern United States and southeastern Canada, although today they are also found in many areas outside of their natural range, according to the University of Michigan Museum of Zoology. In some parts of the western United States, the bullfrog was introduced as a food source. In other places, both in the U.S. as well as Asia, Europe and South America, they were introduced accidentally.

These big frogs are famed for their non-discerning diet. The carnivores will eat just about anything that moves, according to the Illinois Department of Natural Resources.

Learn more about these amphibians below.

Bullfrogs are the largest frog in the United States, but they actually aren't named for their size. Instead, the bullfrog is named for its deep, loud call, which sounds similar to the moo of a cow or bull, according to National Geographic.

The deep call is said to sound like the frog is saying "jug-o-rum" or "br-wum," according to the Illinois Department of Natural Resources. A bullfrog's call is so loud and low that it can be heard more than a half-mile away.

Bullfrogs are typically between 3.5 inches and 6 inches long, and they can weigh up to 1.1 pounds, according to the University of Michigan Museum of Zoology. Like most frogs in the United States, bullfrogs range in color from brown to green and many shades in between.

Female bullfrogs are larger than males. In addition to the size difference, you can differentiate between male and female bullfrogs by the size of their ears in relation to their eyes. Bullfrogs have an external ear, called a tympanum. In males, the tympanum is much larger than their eyes, while in females the tympanum is the same size or smaller than the bullfrog's eye. During breeding season, which is typically between May and July in the northern United States, male bullfrogs also have a yellow-colored throat, while the throat of the females is white.

Bullfrogs spend nearly all of their time in the water, so they are usually seen in and around lakes, ponds, rivers, streams, marshes and swamps, according to the St. Louis Zoo. They prefer still, shallow bodies of water and are often seen at the water's edge.

These frogs thrive in poor environmental conditions created by human development, the zoo reports. They are able to tolerate warmer water temperatures and water with higher levels of vegetation better than other frog species, and as a result they may even be driving other amphibian species to extinction.

Bullfrogs are carnivores and good hunters. They eat mainly insects and crustaceans, but also snakes, worms, frogs, tadpoles, baby ducks and the eggs of aquatic animals, according to the University of Michigan Museum of Zoology. Bullfrogs will also eat other bullfrogs. As tadpoles, they eat mostly plants found in water.