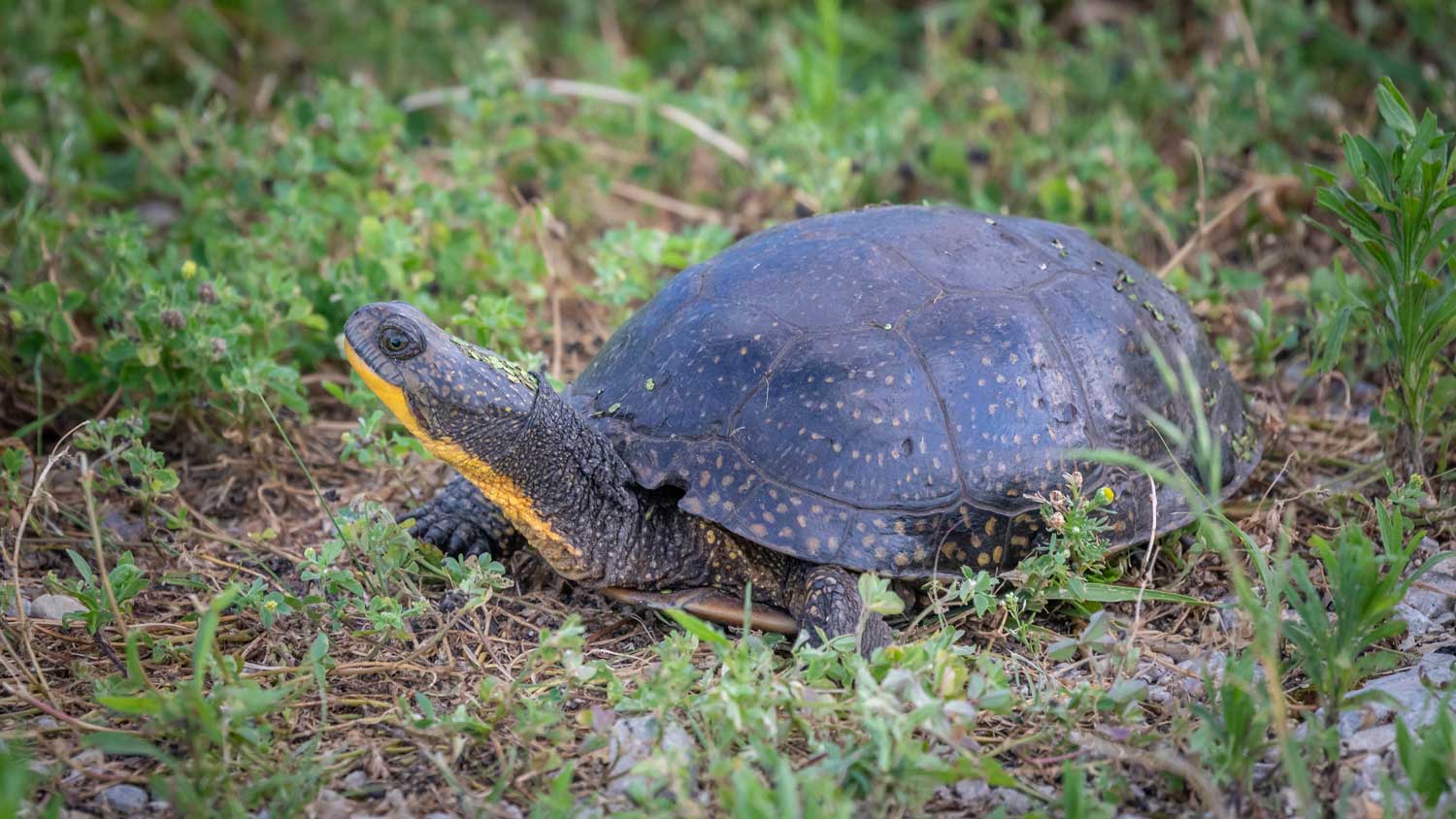 Turtles are a common sight in and around our waterways, but one turtle that isn't spotted all too often is the Blanding's turtle.

The Blanding's turtle lives in northern Illinois, but it is listed as an endangered species in our state and is threatened or endangered in several other states included in its range. The turtle is also listed as endangered on the International Union for Conservation of Nature and Natural Resources' Red List of Threatened Species.

Many factors contribute to their endangered and threatened status, including habitat loss and habitat fragmentation; the illegal pet trade; and predation by other animals, the U.S. Fish and Wildlife Service reports.

Blanding's turtles share some characteristics with sea turtles and tortoises, including their longevity. They live to be about 70 years old, and they don't reach sexual maturity until they are about 20 years old, according to the U.S. Fish and Wildlife Service.

Read on to learn more about these turtles. Want to check them out in person? Visit the Forest Preserve's Isle a la Cache Museum in Romeoville, where a few ambassador Blanding's turtles live and are on display as part of the Blanding’s Turtle Recovery Program.

The Blanding's turtle is named for William Blanding, the naturalist who first described the species in Pennsylvania, according to the Ohio Department of Natural Resources. Blanding practiced medicine and was an avid naturalist, making many contributions to the Academy of Natural Science's specimen collections.

One good identification feature for Blanding's turtles is that they always look like they are smiling because they have yellow chins and throats that contrast their dark green upper jaws. The tops of their shells, called the carapace, are dark brown or blackish in color and typically covered in yellowish spots, according to the Missouri Department of Conservation. Their bottom shells, or plastrons, are yellow or brownish-yellow with dark blotches.

They are considered a medium-sized turtle, with a shell ranging from about 7 inches to 10 inches long. They typically weigh between 1 pound and 3 pounds, Animal Diversity Web reports.

Blanding's turtles have a more limited range and distribution than they once did, according to the U.S. Fish and Wildlife Service. They are found today in Illinois, Indiana, Iowa, Maine, Massachusetts, Michigan, Minnesota, Missouri, Nebraska, New Hampshire, Ohio, Pennsylvania, South Dakota and Wisconsin, as well as some parts of Canada. In Illinois, they only live in the northern half of the state.

These turtles prefer slow-moving, shallow aquatic habitats with clear water and plentiful vegetation, the wildlife service reports. You can find them in shallow lakes and ponds, slow-moving rivers and marshes. They also require sandy or grassy areas nearby for nesting. The turtles are known to live in a few Will County forest preserves, although we don't disclose where because of their endangered status.

Like most turtles, Blanding's turtles are omnivores, eating both plant and animal matter. About half of their diet consists of crustaceans such as crayfish, according to Animal Diversity Web. They also eat a variety of insects and other invertebrates, fish eggs, frogs, snails, seeds and various aquatic plants.

Blanding's turtles are predators of many smaller animals, and as such they help keep the populations of these creatures in check, according to the Missouri Department of Conservation. In addition, Blanding's turtles as well as other turtles and reptiles are considered indicators of a healthy ecosystem. The presence of reptiles and amphibians in and around aquatic habitats is a sign of a clean and healthy ecosystem because these animals are sensitive to changes in their environment and are sensitive to pollutants.